NUSS Procedure in a Patient who had Traumatic Thoracic Aortic Dissection and Thoracolumbar Spine Fracture: A Simple Modification

Nuss procedure, also known as minimally invasive repair of pectus excavatum (MIRPE), is a standard practice in modern surgery. Although initially, this procedure was recommended for the younger age group but nowadays, surgeons also practice in the older age group. Due to little modifications of the original Nuss procedure, the complications rate had markedly reduced. We report a case of 21 years male with pectus excavatum who had traumatic thoracic aortic dissection and fracture of the thoracic spine three years before presentation. He came to our hospital to correct pectus excavatum deformity. At the same time, he was refused by other hospitals due to previous aortic dissection treated with endovascular stent and thoracolumbar spines spine fixed with metallic bars. With a simple modification, MIRPE was performed safely, and the patient was discharged for follow up in outpatient with an excellent outcome.

A 21year-old male known case of pectus excavatum since birth underwent a Road Traffic Accident (RTA) three years ago and sustained thoracic aortic dissection and fracture of the thoracic spine. Aortic dissection was managed with two endovascular stents, and thoracic spines fractures were fixed with screws and rods, He was referred to our hospital for correction of pectus excavatum. CT sac of the thorax showed severe pectus excavatum with a hilar index 4.6. Figure 1(A). Echocardiogram (ECHO) was normal. Our vascular surgeon advised for CT Angiography of chest preoperatively to evaluate the stent position Figure 1(B) Basic blood investigation total blood count, liver and renal panel were within the normal range.

Prior to the induction of general anesthesia patient had an epidural catheter, urinary catheter, an arterial line, and then was intubated using a single-lumen tube. The patient was positioned on the right side of the table in a supine position with both arms in an abducted position. Prophylactic intravenous antibiotics are administered preoperatively and continued for three days postoperatively. We use Tazocin 4.5gm at induction, and three doses postoperatively. As for standard MIRPE, midaxillary points and maximum points close to deformity were marked as shown in Figure 1. At the right lateral side of the chest wall just above the level of the nipples, a small incision is made for placement of a trocar for a 5-mm rigid thoracoscopy to gain optimal view during the whole procedure. The thoracoscope was inserted during apnea, and the deepest point of the pectus excavatum could not be identified because there were dense adhesions. Potential intercostal spaces for bar placement are marked on the skin just medially to the highest point of the deformity on both sides. A template bar was used to determine the optimal bar size and shape, and the bar was shaped accordingly. Incisions were made bilaterally, and a subcutaneous tunnel was created on each side of the chest wall as there were dense adhesions due to previous traumatic injuries we modified the technique. At the highest point, we made the incision and inserted an index finger on each side and dissected medially, so both fingers touch each other and then.

Then introducer was inserted through the incision made on the right side in the midaxillary line. It was passed subcutaneously through the chest wall into the pleural cavity through the intercostal space used for finger dissection. Under the guidance of the thoracoscope, the introducer was carefully passed retrosternal through the anterior mediastinal soft tissue to the left pleural cavity, very carefully in front of the pericardium to the subcutaneously tunneled left side. This maneuver was performed during apnea. The introducer was lifted while pressing down the caudal rib curvatures to reform the chest wall. A ribbon tape was inserted through the eyelet of the introducer, and introducer was retracted. The pectus bar was attached to the ligature and pulled through the tunnel in an upside-down position with the convex side facing the pericardium. The tap was removed. The bar was flipped 180 degrees to the correct location. The flipping was done in a clockwise direction for the surgeon on the right side and counterclockwise for the assistant on the left side of the patient. To avoid cardiac injury. The stabilizer was mounted on each side to stabilize rod, and pins were inserted in stabilizer to prevent Bar rotation in the future. Some surgeons use wires to fix the stabilizer for this purpose. The bar rests on two ribs on the right side, and on the left side, the stabilizer also rests on two ribs, thus ensuring stability and minimizing the risk of stripping the intercostal muscles. Figure 2 The incisions were then closed in 3 layers with a monofilament suture.

Through the camera, port pneumothorax was drained using chest drain in water seal while lungs were inflated and kept in expansion for a few seconds. Patient post-operative recovery was uneventful he was discharged for follow up in outpatient, his pre and post-operative photographs are shown in Figure 3 (A,B&CD). 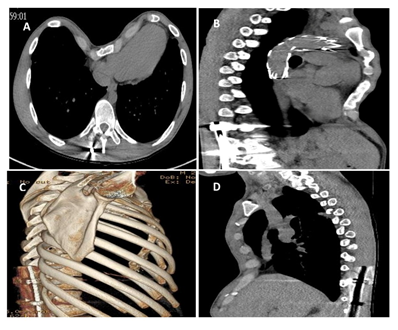 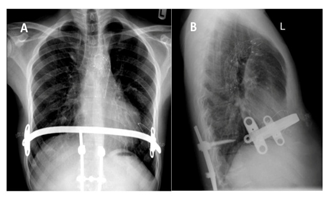 Figure 2: (A) & ( B), Post-operative Chest Radiographs Anterior and Lateral views showing the position of NUSS Bar and thoracolumbar spine fixation and endovascular graft in thoracic aorta. 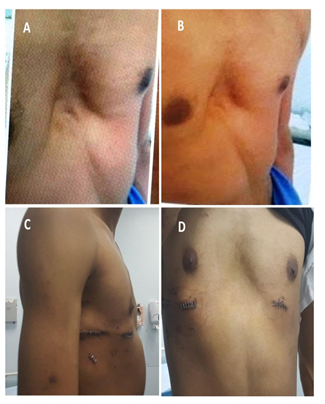 There are many methods for remodeling of congenital chest wall deformity pectus excavatum chest wall. Initially, Ravitch and modified Ravitch gained popularity, but with the advent of MIRPE by Nuss, now the Ravitch operation is only used for selective cases.

Historically Ravitch procedure has good results, but its drawbacks are post-operative chest wall growth and instability due to extensive perichondral dissection and resection of abnormal cartilages. Also, it is a long surgical procedure and demands hospitalization for pain management. Physical activity is severely restricted for several months as the costal cartilages slowly grow back together [6]. The ideal age for the MIRPE is between 6-12 years because, in adults, there is more risk of bar displacement. But with the more refinements and new stabilizer, this problem is much resolved. Beatrix et al. did a prospective observational study about NUSS procedure in 129 adult patients between 2002-2014, 87.6% were male, and the median age at surgery was 21, and the media hilar index was 4.8. They reported overall morbidity was 14.7%, the most frequent complication was bar displacement (7%), and 97.6% of patients were satisfied with cosmetic results [7]. Ohno et al. in 2003 also reported that bar displacement is more in adults as compared to younger age group [8]. Colin et al. also reported in favor of NUSS procedure in adults can provide satisfactory results [9]. The Ravitch procedure is much recommended in selective adult patients as this provides reasonable physiologic and cosmetic satisfaction. Surgery of pectus excavatum (PE) is challenging and requires the insertion of a retrosternal metallic bar, which, in turn, demands blunt dissection in the mediastinum. The operation becomes even more taxing when there are adhesions in the chest, as was the case in our patient. The Aortic dissection was treated with Aortic stent-graft. Thirty-three percent of the patients who undergo thoracic aortic stent grafting develop Post Implantation Syndrome (PIS) [10-12], which is a clinical and biochemical expression of the inflammatory response following stent grafting. Apart from other injuries, including paraplegia from the RTA, he had a dissection of his Descending Thoracic Aorta, which was treated with Endovascular Stent Graft. Both the RTA and Stent graft can give rise to adhesions. It is well known that any amount of blood leaked; within or outside the arterial wall is a very strong irritant and causes intense inflammation. There are many series and papers about MIRPE in the medical literature about its efficacy, risks, and benefits in the younger and older age group.