Cutaneous and uveal melanomas originate from melanin-producing neural crest-derived cells. They differ from each other in their genetic background, ways of spreading and prognosis. Worldwide, malignant melanoma is a common skin tumor with poor prognosis and its prevalence is increasing rapidly in fair-skinned populations. Both cutaneous melanoma (CM) and ocular melanoma (OM) arise from melanocyte transformation and represent deadly forms of cancer. Early diagnosis and treatment increase the overall survival. We are reporting a case of a patient with previous history of uveal melanoma (UV) diagnosed with cutaneous melanoma, lentigo maligna type. The coexistence of both melanomas in the same patient is incredibly challenging due to the same embryonic origin; however, the pathogenesis and biological behaviors are quite different. BRAF and NRAS mutations dominate in lesions arising in an epithelial context such as conjunctival melanoma and CM. Histopathological examination remains the gold standard for the confirmation of the diagnosis.

Lentigo maligna (LM) is a melanocytic neoplasm occurring in the skin that is more frequently exposed to the sun, such as the head and neck of elderly patients. The in-situ phase of lentigo maligna melanoma corresponds to 4-15% of all malignant melanoma cases [1]. In 5-20% of patients, it will develop into an invasive melanoma, most often of the aggressive desmoplastic melanoma subtype [2]. It was first described by Hutchinson in 1890 as a ‘senile freckle’ with progressive radial growth that he speculated had an infectious origin [3]. These kinds of lesions were later further described as ‘circumscribed precancerous melanosis’ by Debreuilh in 1912. Not until the late 1970s-80s lentigo maligna became widely recognized as malignant by Silvers and Ackerman [4]. Clinically, it presents as a slow-growing, asymmetric macule with irregular, poorly-defined lateral borders and various pigmentation. The diagnosis of lentigo maligna may be challenging, as the presentation can be subtle and mimic benign lesions, such as solar lentigo, seborrheic keratosis, pigmented actinic keratosis, lichen planus-like keratosis or benign nevus [5]. OM is classified based on the anatomic site of origin as conjunctival melanoma or uveal melanoma.

We report a case of a 61-year-old Caucasian man, Fitzpatrick skin type 2, with a previous history of ocular melanoma, who presented at the Dermatology Department with a dark brown and black cutaneous patch in the left zygomatic area. The lesion measured 35 × 30 mm and demonstrated irregular borders and asymmetry. It had been present for a year and slowly increasing in size in the last months [Figure 1]. A clinical and dermoscopic diagnosis of lentigo maligna was made. The patient was referred to the Plastic Surgery Department for surgical treatment. The lesion was excised with 5 mm margins and reconstructed with full-thickness skin graft. Histopathological evaluation and immunohistochemical stains showed a markedly atypical broad-based intraepidermal melanocytic proliferation, consistent with melanoma in-situ of lentigo maligna type with no features of regression. The surgical margins were free. Healing was unremarkable. 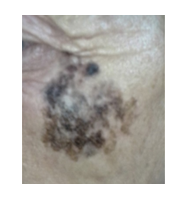 Figure 1: Clinical image of the pigmented lesion in the left zygomatic region. 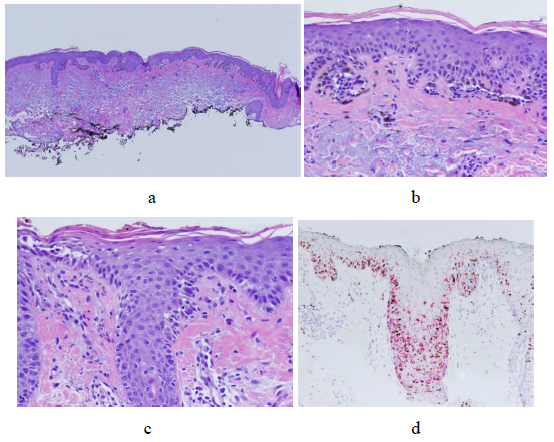 Figure 3: (a-c) H&E-stained sections show an atypical intraepidermal melanocytic proliferation in a background of solar elastosis; (d) Melanocytes were arranged in nests and single cells along the dermal-epidermal junction showing features of pagetoid spread, highlighted with the Melan A stain.

Uveal and cutaneous melanoma both arise from melanocytes that originate from the neural crest [7]. Later they migrate to the epidermal layer of the eye and the skin. Despite the common origin, uveal and lentigo melanoma differ in many levels such as the genetic alteration, treatment implication, tumorigenesis and metastatic spread. Previous history of uveal melanoma lacks BRAF V600E mutation. Additionally, it has been reported in the literature that BRAF mutations do not play a role in the tumorigenesis of uveal tract melanocytes [6]. Therefore, the diagnosis of lentigo maligna in the same patient suggesting an etiologic relationship reveals the lack of association between both melanocytic neoplasms, generating new insights to the pathogenesis. In CM, the primary oncogenic kinase pathway depends on BRAF600E gene mutation that interferes in cellular growth [8]. Another pathway very common bearing genetic mutation is NRAS that leads to an increase replication of carcinogen cells associated with distant metastatic disease and poor prognosis. The perilous sequence mutation predominately happens in 15 exon and lesser in 11 exon, where T base is replaced by A base in nucleotide 1796. The BRAF600E mutation will intensively decontrol the ERK cascade causative of oxidative DNA damage. Whereas in the case of UM, it is believed that the released of short wavelength of blue lights from electronic devices may play as a risk factor inciting an injury in the back of eye by modifying the genetic material or triggering macular degeneration as well. Although, the genetic explanation has shown a responsible hazardous mutation that affects transmembrane G-α proteins function, consequently involving alteration of GNAQ/11Q209L gene mutation, positioned in nucleotide 626 where A > T [9].

Furthermore, it is believed by some studies to exist another sequence alteration in CYSLTR2L129Q gene liable for UM definite, substituting base T > A in nucleotide position 386, where altering latter cell cycle growth pathways such as PLCβ/protein kinase C (PKC), RHO/RAC followed by triggering ERK YAP TRIO and at least ADP-ribosylation factor 6 which is a transmembrane transporter. ARF6 plays an important role since carrying the mutated sequences of GNAQ/11Q209L gene.

Usually, the cascade pathway process for both mutations alter cell differentiation and lead to uncontrolled cellular growth depending on G-α protein function [10]. As long as melanoma lesions target different sites of tissues in body, an important difference between CM and UV was done, where for CM attacks epithelial cell that features conjunctiva and the skin, in contrary UM affects melanocytes in non-epithelial locations such in the brain, spinal cord, leptomeninges, originating from cranial crest. The epithelial melanocytes connect with epithelia line that will be assisted by cell KIT pathway, while extra-epithelial melanocytes will be supported by the endothelin and hepatocyte growth factor signal. Recently, a painstaking research for downstream signal pathways take high importance developing promise accurate treatments in the near future. Research on metastatic spread of melanoma has shown two subtypes of gene expression involved with high risk and low risk prognosis in UM with or without CM correlation. The characteristics of UM displays the worst prognosis featured with low cell proliferation, decreased of Tyrosinase receptors and greater in number of E-cadherin receptors. Whilst in CM the most prominent tumor tissue expression is MIFT gene showing incompatibility with UM diagnose [11]. Whether the gene expression can have high status of replication with low risk for metastasis or a decreased proliferation inciting hematogenous action. The most preferable site of UM is liver, creating right environment to overgrow through invasive spread of neoplastic cells. Indeed, recent data show that it is a correlation between UM and liver selection. The process, shows that uveal carcinomelanoma send signals through integrin α V and integrin β5 which stimulates Hepatic Growth Factor (HGF) in hepatocytes, preparing the field for gene expression and upcoming event [12].

Approximately 50% of melanomas arise from activating BRAF mutations, which itself includes mora than 90% of V600E mutations. The BRAF gene is located on chromosome 7q34. It is a serine/threonine protein kinase activating the MAP/ERK signaling pathway-14. Activation of such pathway is associated with cell growth, proliferation and cell differentiation. The most common mutation of BRAF gene is found in exon 15, which involves transversion of thiamine to adenine. Subsequent finding of this mutation is substitution of glutamic acid for valine at position 600, which stands for nomenclature V600E. This mutation happens within kinase domain of BRAF protein who has an increased kinase activity compared to normal BRAF counterparts, and acts as an oncogene-1.

The most common chromosomal aberration in UM involve GNAQ/11, monosomy 3 and, 6p and 8q gain. GNAQ gene mutation in uveal melanoma results in an overactive protein, which leads to excessive signaling which stimulates cell overgrowth and cell tumorigenesis. This occurs in about half of all cases of ocular melanoma. 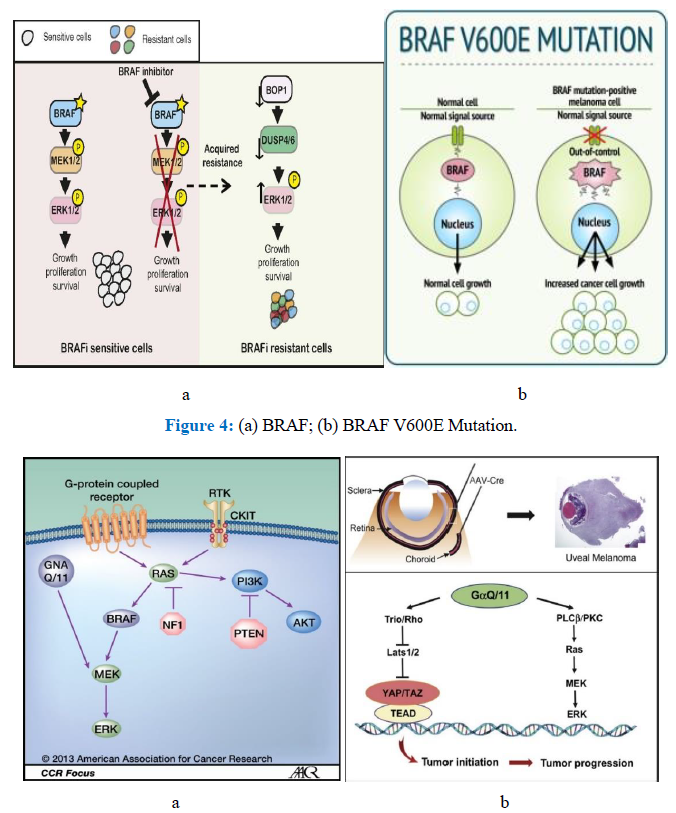 Treatment plan is based on the extent and depth of the lentigo melanoma. Currently there are several treatment methods such as non-invasive with topical imiquimod-12 [13], cryotherapy [14], laser therapy [15] which is more effective when lentigo melanoma is diagnosed in-situ. Invasive therapy for lentigo melanoma includes excisional surgery which is more appropriate for well-defined cutaneous melanoma, staged excision [16] and Mohs micrographic surgery [17] which provides minimal surgical defect along with the lowest recurrence rate and overall increased life expectancy, but with a high cost. Surgical excision remains the treatment of choice with high cure rates, as it removes deep periadnexal melanocytes and the invasive component; it also permits histologic assessment of the margins. Surgical margins of 5-10 mm are recommended by multiple guidelines to ensure as complete of a resection as possible and to reduce the chance of recurrence. Radiation therapy may be a second line therapy if surgery or other excision therapy is contraindicated [18]. Non-surgical methods, depending on the type, have shown recurrence rates of 20-100% at 5 years; surgical methods have an average recurrence of 6.8% at five years [19]. The National Cancer Institute suggests follow-up every three to six months for the first two years after treatment and annually thereafter [20].

Lentigo maligna is a pigmented lesion that can undergo malignant transformation from low-grade to particularly aggressive forms of melanoma. It can present diagnostic and treatment challenges due to its clinical mimicry of benign lesions. Thus, maintaining clinical alertness and having a high index of suspicion is key to earlier and accurate diagnosis in order to ensure optimal treatment outcomes and minimize morbidity and mortality for the patient. When dealing with patients with previous history of uveal melanoma the doctor should make a careful investigation to face a knowledgeable window of gene expression for CM and UM, consequently ease the predictable prognosis of the patient.