Background: Recently laparoscopic repair of pediatric inguinal hernia has been mainly oriented to video-assisted percutaneous ligation of peritoneal sac. Assessment of contralateral defect and a better cosmesis are recognized benefits of this procedure, however there are still some drawbacks often related to the subcutaneous knot. As an alternative to open surgery we propose an original one-access technique with intraperitoneal knot.

Patients and methods: Between January 2009 and December 2019 we operated laparoscopically for inguinal hernia 61 non-consecutive patients (22F - 39M; aged 2 months - 17.5 years) selected for having associated contralateral or umbilical hernia, occasional diagnosis during one-trocar laparoscopy, presence of a ventriculo-peritoneal shunt or recurrence after open or laparoscopic repair. Every patient was treated with one-trocar trans-umbilical intraperitoneal closure of the inguinal ring using an operative laparoscope. Postoperative follow-up was 12 months.

Results: One-hundred-and-one hernias have been repaired (94 indirect - 6 direct; 24 unilateral - 38 bilateral, 1 also with a femoral defect). No surgical complications occurred and no additional access nor conversion were required. Follow-up was uneventful and postoperatively there were no skin tags but the navel. In the first half of patients we had 5 recurrences that were resolved with the same technique, alike 6 failures of open surgery, while in the following cases we observed a decrease of operative time and no recurrence.

Conclusions: One-trocar trans-umbilical laparoscopic inguinal hernia repair with intraperitoneal knot is safe and effective. This method is scarless and prevents any complication or cosmetic blemish due to subcutaneous stitch.

Congenital inguinal hernia is a common problem in infants and children, with an overall incidence of 0.8-4.4% in full-term and 30% in pre-term newborns about 20% of affected children presents with the condition on both sides [1-3]. Traditional treatment for congenital inguinal hernias is dissection and removal of processus vaginalis (PV) at the internal inguinal ring (IIR) through an inguinal incision whose high success and low complications rates are still the standards to compare. Laparoscopy was firstly used only to determine the contralateral patency of the PV and to detect potential associated pathologies. The first laparoscopic hernia repair in children was described in 1993 and since then the minimally invasive surgery for hernia has increased in popularity worldwide [4-6]. Most multi-trocar laparoscopic techniques aim to ligate the PV at the IIR leaving it distally untouched, some procedures through an entirely intraperitoneal approach, others employing extraperitoneal knotting in video-assisted percutaneous procedures [7-10].

Currently results of laparoscopic operations well compare to traditional open surgery but in face of a more demanding operation the major advantages of laparoscopy are still limited to the synchronous assessment of contralateral defects and a more satisfactory cosmetic outcome. From this point of view the foremost benefit comes from single-port procedures, consequently the simple video-assisted extraperitoneal PV ligation with a subcutaneous knot has become commonly practiced [11,12]. Disadvantages of this procedure are the risks of partial (hydrocele) or total recurrence due to loosening suture, postoperative pain for involved subcutaneous nerve fibers, and also granuloma formation, infection and skin wrinkles [12,13]. Most of these blemishes can be related to the subcutaneous knot fastening the purse string suture on the IIR [14,15].

Trying to address those problems a video-assisted technique has been proposed very recently leaving an intracorporeal ligature but still requiring two miniaturized tools beyond the camera [16]. In our Unit since 2009 we have been treating cases selected for laparoscopic hernia repair by an original method of one-trocar trans-umbilical laparoscopy with intraperitoneal knot (OTLIK). We review our experience on the first hundred procedures.

eligible for laparoscopic treatment of their inguinal hernia were selected for having:

presence of a ventriculo-peritoneal shunt (3pts);

recurrence of a previous open or laparoscopic hernia repair (11pts).

The procedure was clearly explained to the family and a written informed consent was obtained before enrollment of every patient. The procedure was performed under general anesthesia and loco-regional analgesia.

A 12mm trocar for laparoscope with a 5mm operative channel (KARL STORZ®, Tuttlingen, Germany) was introduced open through the umbilicus and a pneumoperitoneum of 10-12mmHg was established at a flow rate of 2-3L/min. After a general inspection every inguinal hernia opening was closed with a purse string or a running suture using a non-absorbable monofilament (Prolene 3-0 or 4-0) with ski-shaped needle inserted percutaneously. (Figure 1A, 1B). The needle was driven and tilted leaning against the abdominal wall with the needle-holder through the laparoscope channel. The surgical team never tried to swell the IIR edges with saline injection to ease needle passages nor to cauterize the PV to enhance the closing effect. After sewing the IIR opening, both the needle and the end of the suture were pulled outside through the laparoscope channel to tie a 4-S modified Roeder knot [17] that was slipped inside and tightened. (Figure 1C, 1D). Bilateral cases were treated on both sides; associated surgeries (e.g. peritoneal adhesiolysis, ventricular drain repositioning, umbilical plasty, appendectomy, high section of spermatic vessels, contralateral orchiopexy or orchiectomy) were accomplished during the same anaesthesia. Every procedure was done as a day-surgery routine, except when associated with appendectomy; follow-up controls were scheduled at 1 week, 6 and 12 months postoperatively.

A total of 101 OTLIK were performed in 61 patients (39 males). The median age at surgery was 4.8 years (range 2 months-17.5 years). Thirty-eight children received bilateral herniorrhaphy while the remaining 24 underwent unilateral repair. As a total we treated 94 indirect, 6 direct and 1 femoral hernia. No intraoperative difficulties occurred requiring an additional port or conversion to open surgery. Needle tilting manoeuvres did not cause vessels injuries in any case.

Every patient but those who underwent synchronous appendectomy could be dismissed in 24h from surgery. No complications were reported during postoperative follow-up. After few weeks the sign of laparoscopic access melted into the umbilical scar with no other tag detectable on the abdominal skin. No male patient showed hypoplastic or misplaced gonad after the hernia repair. Five recurrences were observed (4.9%); all of them were among the first 29 patients (47 hernia repairs) while none troubled the following ones (p= 0.019962). Four of the five recurrences had the IIR closed with a purse string, one with a running suture (Fisher exact test: p=0.20635). Every recurrence, including also 6 cases of open surgery, was resolved with OTLIK; the previous laparoscopic cases showed a partial opening under a tight knot (Figure 2A, 2B). Operative times were measured from skin incision till the end of surgery and included also every associated procedure. Median operative times were 58.1 min (range 25-110 min) for bilateral and 54.1 min for unilateral herniorrhaphy. Separate times evaluation for the first and second half of patients showed that the latter decreased from 59.1 to 49.1, and in bilateral procedures from 58.8 min to 57.3 min.

Outcomes of laparoscopic inguinal hernias repair are generally described as equal to open surgery, with the main definite advantages of the chance to assess contralateral side and the limited scars. Moreover, closing IIR without removing the PV offers further benefits in male patients avoiding traumatic hazard to the vas and spermatic vessels and preventing the risk of postoperative iatrogenic ascent of the testis [16-26].

All those advantages are more valuable for the video-assisted single-trocar procedures, however they imply also some drawbacks often related to the subcutaneous knot [11-16]. From this point of view, the OTLIK technique is an ultimate refinement as it achieves a true scarless result without any of those problems arising [17-21].

During our beginning experience no operative complications were observed. Specifically, the absence of bleeding injuries on iliac, spermatic or epigastric arteries proves that this technique is safe, though requiring fluency with single-trocar performing. Further support to the safety of OTLIK is brought by the topical report of a similar technique successfully applied on a special population although our experience, started earlier, differs from this technique both for the type of knotting and the larger spectrum of patients [27]. A recent review claimed that recurrences after laparoscopic hernia repair (including postoperative hydrocele) are between 0 and 5.7%, similarly to open surgery which ranges from 0 to 6.3% [21]. Reasons for laparoscopic failures are usually referred to technical problems such as wide skip areas without complete encirclement of IIR, difficulties in tension tying, broken purse-string thread, or hematoma formation [28]. Our results are aligned to this data, showing an improving trend along time. All of our recurrences involved the first half of patients and most of them having a purse string suture. In our experience the running suture fit more easily also not rounded lacunas like direct or femoral hernias and allowed a smoother knot tying than a purse string suture. Our numbers, though still insufficient to support a clear-cut statistical significance, suggest that running suture can be less affected by failures. The opportunity to adopt this kind of suture is a useful add-on to the safety of our technique in comparison to other laparoscopic procedures. OTLIK proved feasible for any kind of patient from 2 months to 18 years, even if the necessary trocar position at the navel posed different angles of vision and distances from the IIR in such a wide size spectrum of cases. Even in the tallest patients the gap between navel and IIR could be spanned with the tool emerging from the laparoscope operative channel. In cases where the monofilament wire is too short for a comfortable extracorporeal knotting, a single-instrument intracorporeal knot can be appropriate [29].

Minimally invasive methods are usually credited of analogous operative times as in open surgery for monolateral procedures and possibly shorter for bilateral cases. Our operative times appear somewhat longer than most of the other single trocar methods but our cohort of patients was small and included associated procedures and complex cases. Actually in our experience there is a major encumber for reasons other than suturing, as proved by the fact that the difference between median bilateral and monolateral repairs takes about 8 minutes, which can be assumed as the time really needed to close one IIR with our technique. As a consequence, our reported times are supposed to decrease much further with unchallenging patients.

A further valuable feature of our method is the implication of regular and reusable tools not requiring custom nor other-purposed devices, so that it can be of help in standardization and cost-cutting measures.

Starting from the advantage to be virtually scarless we found the technique of OTLIK suitable for every kind of paediatric groin hernia and unburden by faults of subcutaneous knot. For safety, efficacy and the flawless cosmetic outcome this method well compares to any other laparoscopic techniques as as healthier alternative to open surgery. 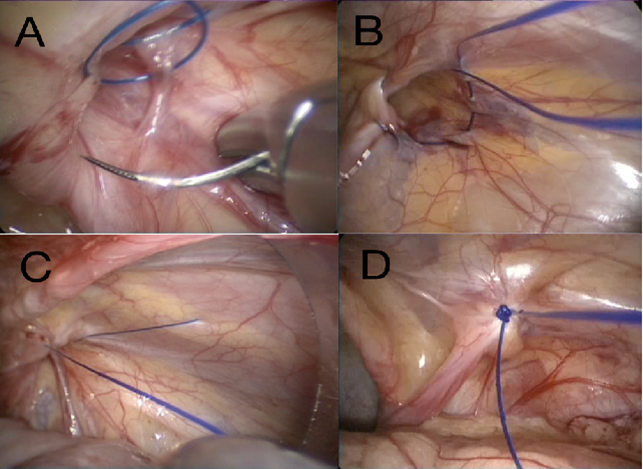 The authors declare that they have

There is no funding information to declare