Objective: Interstitial lung diseases is the name given to the acute or chronic disease group that affects the lung parenchyma as diffuse, causing inflammation, fibrosis and structural disorders in the parenchyma. Diseases in this group show common characteristics clinically, radiologically, pathologically and functionally. It is a heterogeneous group of diseases whose etiology is not fully clarified. Difficulties are experienced in its diagnosis, treatment and follow-up. In this study, we aimed to evaluate 240 patients diagnosed with interstitial lung diseases retrospectively in terms of diagnosis and treatment.

Results: 109 (45.4%) of the patients were women, 131 (54.6%) were male and the mean age was 65 ± 14.3 (18-95). 77 (32.1%) patients were diagnosed by performing transbronchial needle aspiration biopsy with flexible fiberoptic bronchoscopy, transbronchial needle aspiration biopsy was performed in 6 (2.5%) patients by endobronchial ultrasonography and diagnosis was made, 8 (3.3%) patients were diagnosed by mediastinoscopy biopsy, 4 (1.6%) patients by scalene lymph node biopsy, and 10 (4.2%) patients by video assisted thoracoscopic surgery biopsy. Out of 240 patients, 105 (43.75%) pathological definitive diagnosis was reached. The diagnoses were idiopathic pulmonary fibrosis (IPF), sarcoidosis, collogen tissue diseases, cryptogenic organized pneumonia, respectively. The diagnosis of 135 (56.25%) patients who could not be diagnosed pathologically was made with clinical and radiological findings.

Conclusion: It is difficult to make a specific diagnosis in interstitial lung diseases and only 25-30% of patients can be detected etiological factor. Failure to apply invasive diagnostic methods, especially in patients with respiratory distress, makes diagnosis more difficult. Therefore, detailed examination of clinical, radiological and physiological parameters is required in these patients.

The terms interstitial lung disease (ILD) and diffuse parenchymal lung disease are large and heterogeneous diseases that include inflammation and fibrosis of the alveoli, distal respiratory tract, and septal interstitium of the lungs [1]. It affects the gas exchange capacity of the lung either reversibly or irreversibly [2]. It contains more than 150 diseases and most of them are unknown etiology, only 25-30% of them are known. Patients die due to respiratory failure due to pulmonary fibrosis [3]. This disease group shows common clinical, radiological and physiological features. Patients complain of progressive effort dyspnea and dry cough due to pathological changes in the lung parenchyma. Collagen tissue diseases (CTD) increase with the incidence of ILD group such as cryptogenic organized pneumonia (COP), usual interstitial pneumonia (UIP), diffuse alveolar damage (DAD), nonspecific interstitial pneumonia (NSIP) and lymphocytic interstitial pneumonia (LIP) [4]. The monitoring of peripheral cystic, reticular, nodular and linear densities on chest radiographs are findings in favor of ILD and are called "reticulonodular pattern". However, these findings are not specific for ILD [5]. In these patients, a detailed history, physical examination and radiological examination should be performed first.

However, these findings are not specific for ILD [5]. Firstly, in these patients, a detailed history, physical examination and radiological examination should be performed. As a result of these evaluations, diagnostic laboratory tests, pulmonary function tests (PFT) values, advanced radiological examination, bronchoalveolar lavage and invasive procedures for tissue diagnosis should be planned [6]. Since the etiology of ILD is not clearly known, it is very difficult to diagnose in most of these diseases. Lung parenchyma biopsy is recommended for histopathological examination in order to be able to diagnose ILD. Biopsy should be done in a way to include intact tissue [7]. However, it is not always possible to make a diagnosis with these diagnostic methods even in the most developed centers [8]. In one of the largest series published, it was reported that 502 (40%) of 1234 patients could be diagnosed with open lung biopsy [9]. In this disease group, which is difficult to diagnose, treat and follow-up, a multi-disciplinary approach is required, including chest diseases, thoracic surgery, radiology and pathology specialists.

As a result of posteroanterior chest radiographs requested from the patients, high resolution computed tomography (HRCT) was requested from the patients in order to better evaluate the parenchyma and mediastinum. In order to make histopathological diagnosis, FOB was performed to patients whose clinical status was appropriate and EBUS according to necessity and transbronchial biopsies were taken during the procedures. Video assisted thoracoscopic surgery (VATS) was applied to patients who could not be diagnosed with these procedures and lung biopsy was taken. If necessary, the lymph nodes in the mediastinum are performed by mediastinoscopy. Lymph nodes in the scalene region were evaluated by scalene lymph node biopsies. In patients who cannot receive biopsy or are taken inadequate, lesions with radiologically compatible noncazified granulomas, multi-organ involvement, other clinical, histological and radiological lesions with similar characteristics were excluded and the diagnosis of sarcoidosis was made. Some of the patients with the diagnosis of CTD were previously diagnosed, and some were made by our clinic. All of them had lung involvement in their radiological examinations. All patients included in our study were evaluated in terms of diagnostic interventions, radiological examinations, biopsy methods, and histopathological diagnoses. The patients were then grouped according to their diagnosis and examined. Clinical and radiological findings, PFT findings were evaluated.

Table 1: Distribution of diagnoses by gender. 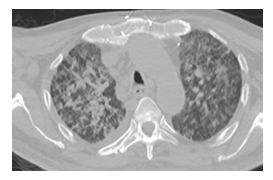 Figure 1A: Areas showing increased density in ground-glass appearance in both lungs. 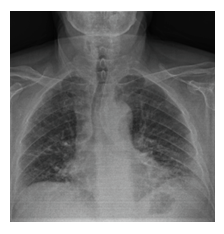 Figure 1B: Subpleural reticular density increments and the appearance of ground-glass areas on posteroanterior chest x-ray. 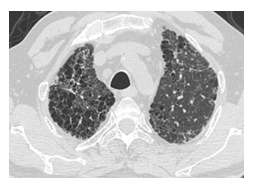 Figure 2A: Common honeycomb image in both lungs. 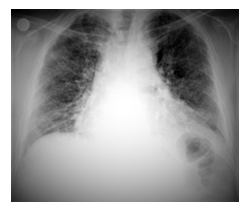 Figure 2B: Image of honeycomb in posteroanterior chest x-ray. 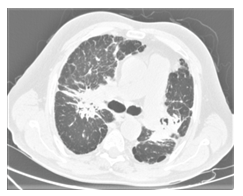 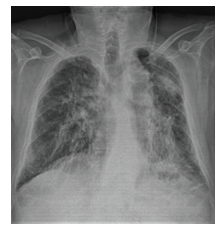 Consequently, open lung biopsy rate is low in IPF patients. The reason for this may be the difficulty of tolerating the operation due to the impaired lung parenchymal structure. Our study is compatible with the literature. Prognosis is generally poor in IPF patients. Even in studies involving many patients, the average 5-year survival is around 50% [22].

In the literatures including many published series, no difference was observed between the treated and untreated patients in terms of survival [23]. Pirfenidone treatment was started for our patients who were diagnosed with IPF and complied with the pirfenidone treatment criteria of the Ministry of Health. In addition to the patients with bad clinics, steroid treatment was started. Considering the overall of our study, 147 (61.2%) of 240 patients were diagnosed by clinical and radiological methods, 77 (32%) patients were bronchoscopic biopsy, 6 (2.5%) patients were biopsies accompanied by EBUS, and 10 (4.1%) patients were biopsied by VATS. The reason for the high rate of our clinical and radiological diagnosis is due to the high number of IPF patients in our study. The reason for the low rate of mediastinoscopy and scalene lymph node biopsies in our clinic is that the diagnosis rates are higher in biopsy procedures with less invasive methods, bronchoscopy and EBUS. In some studies, it is advocated that 88% of IPF can be diagnosed with clinical findings and HRCT findings [24]. As a result; ILD is a common disease group and as determined in our study, sarcoidosis and IPF are the most common. No specific diagnosis can be made in a significant number of patients. In our study, this rate is 39.2%. Since these patients have common clinical, radiological and physiological features, it is difficult to make a specific diagnosis. Sometimes, even an open lung biopsy may not be sufficient to make a diagnosis. Therefore, clinical, radiological and physiological data of patients should be carefully examined. With the development of radiological diagnostic methods, mediastinoscopy, bronchoscopy, EBUS and thoracoscopic surgery methods, specific diagnosis rates increase in this disease. However, it may not always be possible to make a diagnosis even with open surgery. Transbronchial lung biopsy should be applied to patients who cannot be diagnosed clinically and radiologically. The treatment to be given varies according to the diseases. Treatment response is low in IPF patients. In some patients, it can be seen in serious complications related to treatment. Treatment should be planned considering possible complications.