Paradoxical vocal fold motion (PVFM) can occur at any stage of amyotrophic lateral sclerosis (ALS). PVFM results in glottic narrowing or complete blockage of airway in ALS patients, which eventually leads to respiratory insufficiency and sudden death. ALS typically presents initially with weakness of hands and bulbar musculature. Rarely, hoarseness is the initial symptom in ALS. This is a case report of how PVFM presents initially with hoarseness as a first symptom of ALS.

Paradoxical vocal fold motion (PVFM), also known as vocal fold dysfunction;n (VFD), is glottic narrowing due to abnormal adduction of the true vocal folds, and often of the supraglottic structures, during respiration [1]. PVFM is known by many different terminologies in literature [2,3]. Historically, the exact etiology of PVFM has been poorly understood, in which it was treated as refractory asthma [4]. PVFM affects people of all ages but is predominant in young females [5,6].

ALS is a neurodegenerative disorder characterized by progressive loss of both upper and lower motor neurons. Typically, involvement of weakness of hands and bulbar musculature, such as dysarthria and dysphagia, presents in initial manifestations. ALS progresses quickly, resulting in disability and respiratory failure that commonly leads to death 3–4 years after onset [11]. PVFM can occur at any stage of ALS progression [12]. Laryngospasm, another symptom of PVFM characterized by acute uncontrollable adduction of the vocal adduction, may account for sudden death of ALS patients [13].

In regards to the phonatory system, perceptual features can include harshness, strain-strangled voice, breathiness, tremor, and pitch abnormalities [1]. In addition, features of spasmodic dysphonia (or focal laryngeal dystonia) have also been reported in speakers with ALS [7]. In cases of bulbar involvement, dysphonia can be the initial clinical symptom, and often results in a referral to the otolaryngologist before the diagnosis of ALS has been made [8]. Typically, laryngeal structure is normal in appearance. When corticobulbar involvement dominates, there is often a pattern of hyper-adduction of the vocal mechanism, and when bulbar involvement dominates, there is often a pattern of hypoadduction.

A 42-year-old Indian female was initially admitted to the medical ward in Adan Hospital, Kuwait City as a case of Pneumonia in July 2018, confirmed by chest x-ray. Upon physical examination, she presented with hoarseness, short phonation time, hypophonia and dysphagia. She had not sought any medical advice pre-admission, although her symptoms had become progressively worse for the last few months, but she attributed it to her recent pneumonia and couple episodes of cold she had in February and April 2018.

One week post-admission, she developed weakness and hyperreflexia of her right arm. A neurology consultation was requested, and all blood work came back normal. Her CT head scan was normal as well, with no signs of cerebrovascular abnormality. Electromyography was requested, and ALS diagnosis was confirmed.

The patient’s speech evaluation, conducted by a speech therapist, indicated severe dysarthria characterized as flaccid, with compensatory hyperactivity in the laryngeal musculature. The respiratory and phonatory systems were noted as being more affected than articulation.

The patient was discharged against our medical advice and never showed up for any follow up afterwards. Nine months later, the patient came back to emergency department with an attack of acute dyspnea and stridor, most frequently at night. Spirometry was done and it showed severe impairment of respiratory flow through the larynx. Flexible laryngoscopy (Figure 2) revealed bilateral vocal cord abduction paresis; subsequently, tracheotomy was performed, she remained in the hospital for one week. One year after the tracheotomy, she experienced respiratory failure and passed away in the ICU after a failed attempt at resuscitation.

Figure 1: Flexible laryngoscopic view of the vocal cords from the patient, the right is during inspiration and left during expiration. 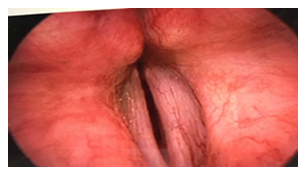 Hoarseness or stridor can be an initial symptom of ALS. Therefore, in cases of Paradoxical vocal fold motion of unknown aetiology, ALS should be taken into consideration in the context of differential diagnosis. Patients presenting with hoarseness, short phonation time, hypophonia and dysphagia should raise suspicion and justify prompt referral to an otolaryngologist. There is no enough data in this specific symptom. A case series would be a very good way to start.