Minimally invasive surgery is becoming widely adopted to decrease surgical morbidity and mortality, however data is still evolving and the optimal approach remains an area of controversy. We compared our unique single-institution experience with transhiatal, transthoracic, and minimally invasive approaches to examine survival and toxicity outcomes among patients treated for esophageal cancer.

Consecutive patients undergoing esophagectomy for esophageal or gastroesophageal junction (GEJ) cancer at a single institution between 2008 and 2017 were retrospectively reviewed. The patients were stratified by surgical approach. The Kaplan-Meier method was performed using the log-rank test to calculate two-year overall survival (OS) and two-year progression-free survival (PFS).

Esophageal cancer has classically presented in patients with chronic alcohol and tobacco use, histologically characterized as squamous cell carcinoma (SCC) arising from the upper to middle esophagus. Increasing in incidence over the last few decades, adenocarcinoma compromises about 70% of cases in North America and Western European countries [1]. Adenocarcinomas typically arise from the distal esophagus or gastroesophageal junction (GEJ) and are thought to be related to chronic reflux, obesity, and Barrett's esophagus [2]. Patients present with unintentional weight loss, progressive dysphagia, melena, and heartburn unresponsive to medical therapy [1]. Additionally, the heavy prevalence of Barrett's esophagus has led to increased detection through screening [3]. Esophageal cancer is a rapidly progressive disease with poor 5-year overall survival rates, despite continued improvements in multi-modality care [4,5]. Esophageal resection remains the mainstay of treatment for locoregionally advanced disease [6]. The current standard of care combines neoadjuvant chemoradiotherapy [7,8] or adjuvant treatment in appropriately selected patients [9]. Considerable variation exists in the surgical technique employed for esophagectomy, The Society of Thoracic Surgeons General Thoracic Surgery Database lists 14 different methods. Surgical options are typically based on patient's medical condition, tumor location, stage, and surgeon preference. The two most commonly used techniques for total esophagectomy include transhiatal esophagectomy (THE) and a transthoracic approach, known as the Ivor Lewis esophagectomy (ILE) [10]. Some evidence suggests a transhiatal approach to have lower postoperative morbidity, however several limitations include lower lymph node retrieval and difficulty in resecting large, mid esophageal and/or paratracheal tumors [10]. A minimally invasive approach to esophagectomy is an alternative to conventional open techniques, aimed at further decreasing overall morbidity and mortality [11-13]. Minimally invasive esophagectomy (MIE) has increased in popularity and is being performed at numerous academic centers [11]. Reports have confirmed this approach to be safe and to have comparable survival outcomes with open techniques, although prospective data is still evolving [14]. The optimal surgical approach for esophageal cancer has thus remained an area of controversy, and prospective trial outcomes do not necessarily translate into real-word outcomes. The complex technique of minimally invasive esophagectomy, cost effectiveness, and role in combined trimodality therapy calls for more comparative studies. We compared our unique single-institution experience with transhiatal, transthoracic, and minimally invasive approaches to examine survival and toxicity outcomes among patients.

The medical records of consecutive patients who underwent esophagectomy for histologically proven esophageal or GEJ cancer at a single institution between 2008 and 2017 were retrospectively reviewed. Patients who underwent esophagectomy for reasons other than cancer, including trauma, chronic inflammation, and motility disorders were excluded. Clinical and pathologic staging was completed by the AJCC 7th edition; patients with metastatic disease or recurrence at time of esophagectomy were excluded. All patients, regardless of age, race, tumor location, or neoadjuvant or adjuvant treatment were included in the cohort. Patients were not excluded based on histologic variant. Institution Board Review approval was obtained prior to the collection of all patient information from the electronic medical record.

Differences between groups were compared according to surgical technique using the one-way analysis of variance (ANOVA) for continuous variables and Pearson’s Chi-square test or Fisher’s exact test, as appropriate, for categorical variables. The primary endpoints were 2-year overall survival (OS) and progression-free survival (PFS). Secondary endpoints were focused on complications of the procedure and the gastrointestinal conduit. All survival time points were evaluated from date of surgery. Patients were analyzed as censored from the date of last clinical contact, if no radiographic or clinical progression was identified during follow-up examinations. The Kaplan-Meier method was performed using the log-rank test to compare OS or PFS between different surgical techniques. All tests were two-tailed, and differences were considered statistically significant at the 0.05 level. Statistical analyses were conducted using IBM SPSS Statistics for Windows (v. 25.0, Armonk, NY).

Perioperative outcomes and morbidity are shown in Table 3. Length of hospitalization and readmission rates were comparable among the groups. Overall median time to readmission was 17.0 days (range, 1-90). The most common reasons for readmission were infections and pulmonary complications (n=20), anastomotic leak (n=9), dysphagia (n=6), nausea and abdominal pain (n=6). Greater than 1 readmission within 90 days was seen in 21 total patients, with admission diagnoses comparable to the first readmission. Perioperative adverse events were not significantly different between the groups. Wound, cardiac, and renal complications remained low, while pulmonary complications occurred in 42.9%. A significant portion of patients (52.0% overall) had major complications with a Clavien-Dindo grade ≥ III, correlated with an average CCI score of 35.2, with no difference based on esophagectomy approach. When comparing rates of re-operation in the perioperative period, higher rates occurred in the MIE cohort (19.6%) compared to the ILE (14.7%) and THE (9.3%) patients (p = 0.181). The most common reason for all re-operations was anastomotic failure (n=12). No significant differences between surgical approaches were observed for rates of tracheoesophageal fistula, anastomotic leaks, or anastomotic stenosis. Nor did neoadjuvant chemoradiation predict for these complications. Only 9 patients developed tracheoesophageal fistula. The overall risk of anastomotic leak was 31.3% with treatment as follows: 8 patients required a conduit revision procedure, 15 patients required percutaneous drain placement, 5 patients required endoscopy exploration, and 34 patients were observed clinically. Leak rates with clinical impact (procedural intervention or re-admission) only occurred in 16.7% of patients with no difference between groups (p=0.117). The median time to development of leak was 10 days (range, 2-59). Anastomotic stenosis developed in 42 total patients. Balloon dilations were performed in all 42 patients and stent placement was required in 18 of these patients after failure of dilation for symptomatic dysphagia. One patient refractory to dilations and stents required surgical removal of the stenosis with a subsequent fasciocutaneous deltopectoral flap and split-thickness skin graft as a bridge to colonic interposition. Patients that developed anastomotic leak were significantly more likely to develop stenosis (p=0.003). Time to first stenosis occurred at a median of 3.7 months (range, 1.2- 63.8). The median endoscopy encounters for patients that developed stenosis was 7.5 (range, 1-28). Endoscopy duration for patients developing stenosis was as follows: <1-month (1 patient), 1-3 months (5 patients), 4-6 months (7 patients), 7-12 months (5 patients), 1-3 years (15 patients), >3 years (9 patients). 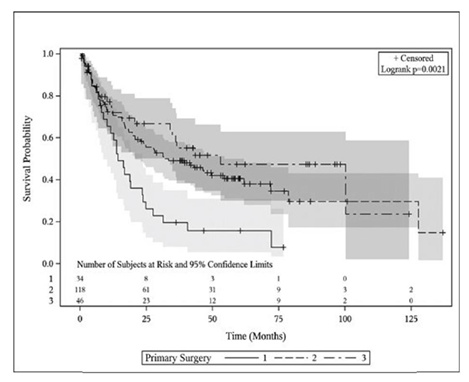 In summary, this study adds to the growing literature that minimally invasive esophagectomy results in comparable survival outcomes to the transhiatal approach and suggests inferior outcomes with the Ivor Lewis approach. The perioperative morbidity and mortality are markedly comparable, which are of utmost importance when considering this patient population that typically endures significant toxicity from multimodality treatment. The minimally invasive surgical approach should continue to be explored with definitive large-scale outcomes data.

No specific funding sources were utilized in the publication of this manuscript.

All authors have no conflicts of interest to disclose.

All data is stored separately in a data repository.

The authors have fulfilled all the criteria in the definition of authorship.

Institution Board Review approval was obtained prior to the collection of all patient information from the electronic medical record.