The incidence of Hepatocellular carcinoma (HCC) is increasing worldwide. HCC usually complicates an underlying chronic liver disease. Due to advances in the treatment of chronic liver disease, and the increase in non-alcoholic steatohepatitis (HCC usually arises before cirrhosis), many HCC cases are not currently associated with a decompensated cirrhosis of the liver at diagnosis [1]. In recent years, the therapeutic armamentarium has expanded and this increase in treatment options requires cooperation between physicians for efficient management of these patients such as with dedicated multidisciplinary tumor boards [2]. HCC metastasizes late and infrequently; and usually affects the bones, lungs, lymph nodes, and adrenal glands. Isolated peritoneal metastases are an uncommon presentation and are mainly observed after spontaneous tumor rupture, biopsy or tumor resection, when they can be rapidly fatal. We report a case of a peritoneal carcinomatosis that developed after resection of HCC. This case benefited from a treatment of Sorafenib, allowing complete surgical resection associated with a hyperthermic intraperitoneal chemotherapy (HIPEC) and favorable outcome.

In 2016, a very large right liver tumor mass was detected by an ultrasound exam in a 63-year-old man experiencing dysuria. Liver and tumor biopsies confirmed the diagnosis of HCC arising in a mildly fibrotic liver. Liver function tests and AFP serum levels were normal and except alcoholism, no other aetiology could be found. In December 2016, the patient underwent an uncomplicated right hepatectomy. A pathological exam demonstrated a 115 mm, well- differentiated tumor of axis HCC, with microscopic vascular emboli, and borders 1 mm adjacent to Glisson’s capsule. The peritumoral liver had minimal fibrosis (Figure 1). In October 2017, 11 months later, a CT scan revealed multiple peritoneal nodules (>10, ranging from 5 to 30 mm in size) predominantly close to the liver resection margin (Figure 1) and also along the right colon and the omentum. After ruling out intrahepatic recurrence by MRI, treatment with Sorafenib (Nexavar™) at 800 mg/day was initiated. Four months later, the nodule size and vascularization had decreased (Objective Response) (Figure 2). A complete surgical resection with HIPEC was then performed in April 2018. Intra-operatively, a dozen tumor nodules were found on the omentum, appendix, right colon, and near the resection margin. The peritoneal carcinomatosis index (PCI) was evaluated at 7. After a complete cytoreduction (CCR 0), HIPEC using oxaliplatin at 42°C was administered for 30 min. No adverse events were noticed and the patient was discharged on day 9. Sorafenib was not resumed post- operatively. In May 2019, 13 months after the HIPEC, a CT scan did not detect intra-abdominal recurrence however 6 small (less than 1 cm) lung metastases were identified. Sorafenib was reintroduced and 12 months later (May 2020), 32 months after the initial diagnosis  of intra-abdominal recurrence, the metastases were controlled. 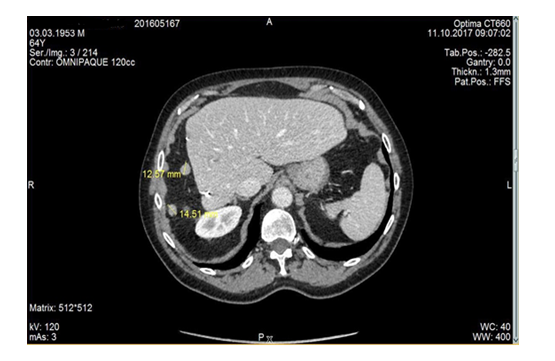 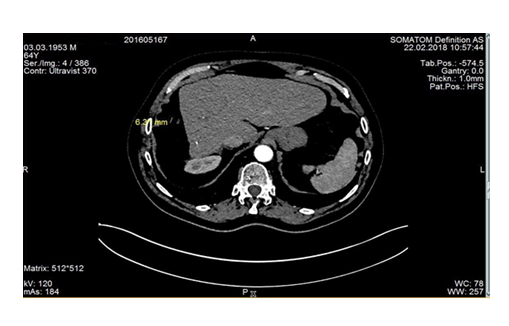 Figure 2: Decrease in size and in vascularization of these nodules after 4 months of sorafenib 800 mg/d.

Only patients who could benefit from resection of the carcinomatosis exhibited favorable outcomes, including survival more than 5 years after resection. In an American series of 22 HCC patients with peritoneal carcinomatosis who underwent complete surgical resection, including 5 with additional HIPEC, the mOS was close to 2 years [5]. In appreciation of the aggressiveness of this recurrence, our patient received Sorafenib [6] as a first-line treatment. Partial response under Sorafenib, as observed here, is infrequent in medical series (2%) [6], but is always associated with a favorable prognosis (mOS of 47 months in one series) [7]. Taking this into account, we considered that a surgical option to remove all peritoneal deposits was possible in this patient with a minor liver disease.

Reports of cytoreductive surgery followed by HIPEC for peritoneal carcinomatosis of HCC are infrequent in the literature and are mostly found in case reports; however, there exist two studies of 14 and 21 patients respectively [8, 9]. A study from New York reported 14 cases (10 without cirrhosis and 4 with Child-Pugh A cirrhosis; 13 post-operative recurrences) treated by cytoreductive surgery (mean PCI 9.9), with 7 of these receiving additional HIPEC treatment  using Mitomycine C. Complete cytoreduction was achieved in 13 cases. Post-operatively one patient died (PCI 33). Metachronous peritoneal recurrence occurred after a median of 23 months, mOS for CCR 0-1 was 35.6 months. The second series was multinational and reported 21 cases (median age: 46 years) in 25 years from 10 reference centers [8]. The median PCI was 14; the surgery was completed in 16 cases (CCR 0-1); 5 different chemotherapy agents were used (cisplatin, mitomycine D, adriamycin, oxaliplatin and irinotecan); 10 had severe (grade 3-4) adverse events, and mOS of CCR0-1 patients (over 5 years) was not reached while for CCR2-3 this mOS was 5.9 months.

We posit that complete surgical resection followed by hyperthermic intraperitoneal chemotherapy must be considered for patients with a good performance status, without decompensated cirrhosis, and with a low PCI. This combination may allow for a longer survival. Preoperatively, a neoadjuvant period of systemic treatment could allow for better candidate selection for this surgery.