Plexiform Hypoglossal Schwannoma in an 11-Year-Old Child: Diagnosis, Management and Review of the Literature

Background: Plexiform schwannomas are usually sporadic. In hereditary diseases they are linked to benign and aggressive malignant tumors. Schwannomas of the hypoglossal nerve are very rare and mostly develop at the skull base without plexiform variant.

Case presentation: In the floor of the mouth a salivary gland tumor was suspected on imaging of an 11-year-old girl. Intraoperatively the tumor was connected to the hypoglossal nerve. There were no postoperative functional deficits. Histology identified a plexiform schwannoma with collagen pseudorosettes. Molecular-genetic testing of genomic and tumor DNA could not identify a pathogenic variant in the NF2, SMARCB1, or LZTR1 genes. The patient is currently free of disease 74 months postoperatively.

Conclusion: In case of a histological diagnosis of schwannoma, particularly in children, immunohistochemical examinations should be carried out and depending on these results human-genetic diagnosis is indicated.

Schwannomas are encapsulated benign peripheral nerve sheath tumors that arise from the Schwann cells. They are also known as neurinomas or neurilemomas. In 25-40% of cases, they are located in the head and neck area [1], often taking the form of vestibular schwannomas. Schwannoma of the hypoglossal nerve is a rare tumor entity and is almost always found with combined intracranial-extracranial components, intracranially or extracranially arising at the base of the skull. The submandibular region is only affected in around 8% of cases [2]. As a pathologic-anatomic variant of schwannoma, plexiform schwannoma is characterized by an intraneural, plexiform, and often multinodular growth pattern. It was first described by Harkin et al. in 1978 [3]. Approximately 4% of all schwannomas are plexiform. Nearly a quarter of all plexiform schwannomas (23%) affect the head and neck region [4]. They usually occur sporadically, but may also develop in patients with type 2 neurofibromatosis (mutations in NF2; Online Mendelian Inheritance in Man OMIM #101000) and in familial schwannomatosis (mutations in NF2, SW1/SNF related matrix associated actin dependent regulator of chromatin B1 SMARCB1, and leucine zipper like transcription regulator 1 LZTR1; OMIM #162091, #615670) [4]. In addition to familial schwannomatosis, germline and somatic variants in SMARCB1 are associated with the development of malignant renal and brain tumors during childhood (rhabdoid tumors; OMIM #609322) [5]. Also recently SMARCB1 has been reported to be involved in the development of multiple meningiomas [6].

An 11-year-old girl presented with a left-sided, progressively growing space-occupying lesion in the floor of the mouth. There were no other symptoms, motility disturbances, or pain. Clinically, the findings suggested a mobile, solid tumor on the left-sided floor of the mouth. On ultrasound, the tumor’s appearance was that of a round, clearly defined, polycyclic, hypoechoic, inhomogeneous, well-perfused, solid lesion with distal enhancement (Figure 1). Magnetic resonance imaging (MRI) showed a multilobular, dumbbell-shaped space-occupying lesion 7 cm in size, filling the body of the tongue and with growth extending through the floor of the mouth into the submandibular gland, with strong contrast enhancement (Figure 2).

The findings raised a suspicion of a salivary gland tumor. The differential diagnosis included epidermoid or dermoid cyst, schwannoma, granular cell tumor, hemangioma, lymphangioma, sarcoma, lymphoma, or teratoma. Due to the extent of the lesion, surgical plan initially involved a combined transoral-transcervical approach. During resection, it was found that the tumor in the body of the tongue was in contact with the hypoglossal nerve. Resection was ultimately possible via a purely transoral route, with temporary median splitting of the tongue (Figure 3). There were several small nerve branches resting on the tumor, one of which was resected during removal of the tumor (Figures 4 and 5). Postoperative management included ventilation and monitoring in the pediatric intensive care unit. Extubation was carried out after the swelling declined on the third postoperative day. Wound healing was normal during the subsequent course. At the follow-up examination 6 months after the operation, MRI diagnosis showed no recurrence and the patient still had no functional deficits. With continuing clinical and imaging check-ups, the patient is now free of disease 74 months postoperatively.

Histological examination showed a plexiform schwannoma with marked collagen rosettes (synonym: neuroblastoma-like plexiform schwannoma). Due to the focal mosaic pattern of SMARCB1 immunostaining and the unusual age and location of the neoplasm (Figure 6), the patient was referred for genetic counseling in order to exclude hereditary schwannomatosis due to germline mutation in one of the genes associated with familial schwannomatosis. Molecular-genetic analysis did not identify a pathogenic variant in the SMARCB1 gene (NM_003073.4) and could therefore not confirm the presence of schwannomatosis type 1. Other types of schwannomatosis (with variants in the LZTR1 (NM_006767.2) and NF2 (NM_181832.2) genes) were also not confirmed in genomic DNA. In addition, panel sequencing and comparison of genomic and tumor DNA using the TruSight Cancer panel on an Illumina MiSeq platform (Illumina, Inc., San Diego, USA) could not identify any somatic variants in the analyzed genes. On the basis of the results from histology and human genetics, the diagnostic work-up was extended with MRI of the head and spine. No other schwannomas were identified, and the suspected diagnosis of a disorder belonging to the neurofibromatosis and schwannomatosis group could not be confirmed clinically. 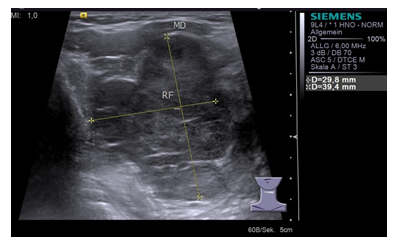 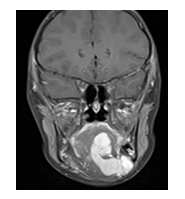 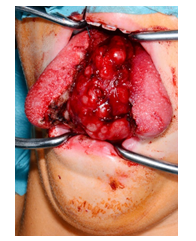 Figure 3: Transoral resection, with temporary median splitting of the tongue. 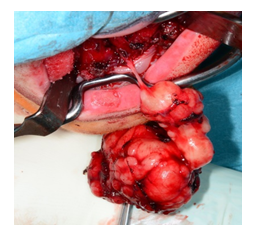 Figure 4: A small nerve branch resting on the tumor, which was resected during tumor removal. 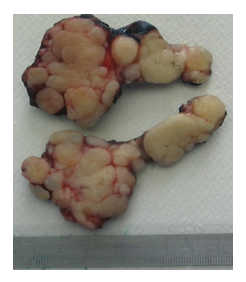 Figure 6: (A) The tumor showed a rhythmic pattern of the cells around collagen pseudorosettes; (B) Diffuse staining with S100 protein; (C) SMARCB1 showed a focal mosaic pattern.

Individual case reports and also an extensive clinical and pathological review are available on plexiform schwannomas. The lesions affect the head and neck region in 23% of cases [2]. Two cases associated with the hypoglossal nerve have so far been described [4,10]. In addition to isolated and sporadic plexiform schwannoma, the differential diagnosis includes type 2 neurofibromatosis (particularly in children), as well as schwannomatoses caused by germline variants in SMARCB1 or LZTR1 [4]. In familial schwannomatosis, a hereditary pathogenic variant in the SMARCB1 tumor suppressor gene can be identified in 40–60% of cases [5]. When a pathogenic variant in the SMARCB1 gene is confirmed in the germline, there is a 50% risk of the mutation being passed on to the patient’s descendants. Even when a germline variant is not confirmed on molecular genetics, a slight risk of recurrence in descendants must be assumed due to the possibility of postzygotic mutation [5]. A histopathological mosaic pattern for SMARCB1 may suggest an association with type 2 neurofibromatosis or schwannomatosis. Patil et al. noted that a mosaic pattern was present in over 83% of cases in type 2 neurofibromatosis and 93% of cases in familial schwannomatosis [12]. Accordingly, a SMARCB1 mosaic pattern is not pathognomonic or specific for a germline mutation in the SMARCB1 gene.

It is important to detect a pathogenic SMARCB1 germline variant, as these patients have a predisposition to develop aggressive renal and brain tumors, mainly during childhood. Rare reports have identified the origin of SMARCB1-deficient epithelioid malignant peripheral nerve sheath tumors as lying in a preexisting neuroblastoma-like schwannoma in patients with SMRACB1 germline variants [13]. In addition, multiple intracranial meningiomas may occur [6]. The range of SMARCB1-associated tumors has expanded in recent years to include various types of neoplasia, both sporadic and also germline-associated [14]. This underlines the urgency of clinical surveillance and follow-up in cases of SMARCB1 germline mutation after human genetic diagnosis and consultation.

Hypoglossal schwannoma in the floor of the mouth and submandibular region is rare. The plexiform variant is even rarer. The differential diagnoses described in this case report need to be considered, although the clinical and imaging-morphology aspects of the differential-diagnostic process may sometimes be difficult. Plexiform hypoglossal schwannoma is a benign tumor. Surgery is the treatment of choice, and depending on the situation it may be carried out transorally with preservation of function. The histopathological diagnostic approach to this variant of schwannoma, particularly in children, should take into account the several possibilities linking the tumor to an underlying genetic disorder, and genetic counseling is mandatory to exclude or confirm a genetic predisposition.

When there is a histological diagnosis of schwannoma, particularly in children, an experienced pathologist should carry out immunohistochemical examinations to exclude neurofibromatosis and schwannomatosis. If there is any evidence of these diseases, human-genetic diagnosis is indicated, as they are associated with a predisposition for other benign and malignant tumors to develop. Depending on the results of the examinations, further diagnosis may be necessary in other family members. Due to the interdisciplinary nature of the care that is needed, diagnosis and treatment should be carried out in a center that has all of the various specialist disciplines available.

We have obtained written informed consent from the patients guardian.