Postoperative Bleeding in a Patient with Appendiceal Mucinous Adenocarcinoma and Liver Dysfunction Patient: A Case-Report

We report the case of a 69-year-old woman who was admitted to the hospital due to dyspepsia. The patient was a carrier of hepatitis B virus, and liver dysfunction was diagnosed preoperatively. Abdominal enhanced computed tomography and colonoscopy showed that the appendix was significantly enlarged and dilated, and effusion and appendicitis were observed. Mucinous adenocarcinoma and appendiceal abscesses were not excluded because of the lack of specificity, which makes it difficult to diagnose the disease before a surgery. Laparoscopic appendectomy was performed, and a rapid frozen pathological examination showed a mucinous tumor of the appendix. Intraperitoneal hyperthermic chemotherapy with cisplatin was administered. The patient had abdominal hemorrhage on the fifth day after the surgery. After active treatment, she was discharged from the hospital 19 days after the surgery.

The diagnosis of appendiceal malignant tumors mainly depends on preoperative imaging and microscopic results,and highly suspected patients, rapid pathological examination is needed during the operation., and so on. Notably, for elderly patients with hepatitis B infection and liver dysfunction, there is a probability of postoperative bleeding.

Appendiceal malignant tumor is a kind of malignant tumor with low incidence in the digestive system, accounting for about 0.5% of gastrointestinal tumors [1], which can be divided into adenocarcinoma and carcinoid. Adenocarcinoma is further divided into mucinous adenocarcinoma, colonic adenocarcinoma, goblet cell carcinoma and signet ring cell carcinoma [2]. Mucinous adenocarcinoma is a histological form of tumor, in which mucous tissue accounts for more than half of the tumor tissue [3]. Primary appendiceal tumors often occur in people over 54 years of age, and more frequently in females than in males [4], but this difference is not significant [5]. At present, there is no conclusive cause of this disease. It is assumed that it is related to the long-term surrounding inflammatory stimulation and inflammatory exudates of the appendix [6]; however, some scholars think that schistosomiasis may lead to the occurrence of appendiceal tumors [7]. Because the disease has no specific manifestation, it is easily misdiagnosed and missed in the clinics, and lacks a standard effective treatment plan. Liver dysfunction refers to liver damage caused by various factors and can be divided into primary and secondary liver dysfunction. Primary liver dysfunction is caused by acute and chronic liver diseases such as hepatitis, liver cirrhosis, liver cancer, etc., whereas secondary liver dysfunction is cause by critical illnesses, severe infections, and surgery [8]. Because of the crucial role of the liver in metabolism, once liver function is impaired, the metabolism and immunity of the body will be affected to varying degrees, including insufficient synthesis of coagulation factors and fibrinogen in the body, which will lead to coagulation dysfunction, trauma, and stress ultimately leading to bleeding. In November 2019, we confirmed a case of appendiceal mucinous adenocarcinoma complicated with liver dysfunction and bleeding after surgery. Informed consent was obtained from the patient and the study was approved by the Ethics Committee of the Sixth Affiliated Hospital of Guangzhou Medical University to explore the best options for the diagnosis and treatment for this type of disease.

A 69-year-old female patient was hospitalized because of "anorexia with nausea and vomiting for 7days." Before admission, she was repulsed by greasy food, and had nausea and non-ejective vomiting of stomach contents. She was diagnosed with cholecystolithiasis in other hospitals previously, and was treated with stomach protection and anti-inflammation, but the symptoms did not improve considerably. Laboratory tests after admission indicated the following: alanine aminotransferase (178 U/L), total bilirubin (32.2 μmol/L), aspartate aminotransferase (169 μmol/L), direct bilirubin (14.2 μmol/L), L - γ - glutamyltransferase (165 U/L), hepatitis B surface antigen-positive (as indicated by the critical value), alpha fetoprotein (329.6 ng/mL), carbohydrate antigen 19-9 (CA19-9; 219.40 U/mL), prothrombin time (PT; 13.1 s), activated partial prothrombin time (APTT; 25.1 s), thrombin time (TT; 19.0 s), and D-dimer (D-Di; 1.60 s). An abdominal computed tomography (CT) scan showed multiple gallstones and cholecystitis was considered. Therefore, the admission diagnosis was cholecystolithiasis complicated with cholecystitis and the presence of hepatitis B virus. A proposal for a laparoscopic cholecystectomy in our hospital was considered, and the results of the enhanced CT before surgery showed that (1) the volume of the gallbladder was enlarged, multiple nodular dense shadows could be seen in the neck of the gallbladder, and the gallbladder wall was slightly thickened; (2) the appendix was significantly thickened, the diameter of the tube was approximately 30 mm, there was no definite thickening of the wall, effusion could be seen in the cavity, multiple patchy high-density foci could be seen, and the surrounding fat space was clear (Figure 1a, 1b, 1c). CT scan results were suggestive of cholecystolithiasis with cholecystitis, appendiceal dilatation effusion with appendiceal fecal stone, and no mucinous adenocarcinoma. To confirm the appendiceal lesion, further enteroscopy showed a lip-shaped ileocecal flap, a tumor with a smooth surface and soft touch approximately 3.5 cm × 4.0 cm in the ileocecal part, and an appendiceal abscess could not be ruled out (Figure 2). Hepatitis B virus DNA (8.28×105 IU/mL) in the replication stage was also observed. 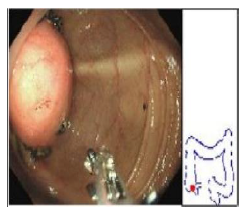 Figure 2: Colonoscopy results of a 3.5 cm × 3 cm mass at the ileocecal region

Laparoscopic appendectomy was performed after considering appendiceal mucinous adenocarcinoma. The appendix, located in the lower part of the cecum, was enlarged (approximately 6 cm × 3 cm × 3 cm), had a smooth surface but hard texture, and adhesion with the surrounding area was not obvious. After severing the appendiceal mesentery, the appendix was ligated and removed, and the specimen was full of mucus (Figure 3a, 3b, 3c, 3d). 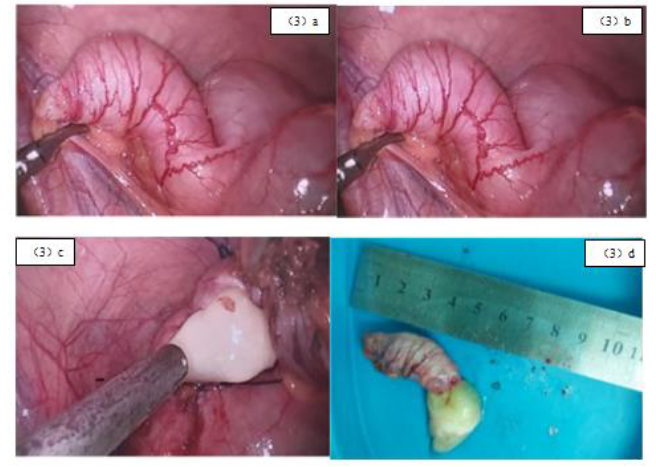 A rapid frozen section examination was done and the results suggested appendiceal mucinous tumor. Additionally, a laparoscopic right hemicolectomy was performed, dissociating upward to the horizontal plane of the duodenal bulb via the caudal approach, outward to the right paracolic sulcus, upstream to the hepatic flexure of the colon, fully dissociating the cecum and terminal ileum (15 cm), and resecting the ascending colon. Ileocolonic end-to-side anastomosis was performed to close the abdominal cavity, and then the patient received cisplatin together with intraperitoneal hyperthermic perfusion.

Postoperative pathological examinations of the appendix were performed. The results showed a dilated lumen, villous or cluster hyperplasia of the local lining epithelium, mild to moderate atypia associated with epithelial cells, enlarged and deeply stained focal epithelial nuclei, easily observed mitotic images, and the disappearance of intrinsic glands. Moreover, the muscular layer of the mucosa was not obvious, and the wall thickened with fibrous tissue hyperplasia. The formation of mucus paste in the lumen (between the smooth muscle of the vessel wall and the serous fibrous fat), and some free mucus tissue were observed. In appendiceal mucinous tumors, most of the epithelium show low-grade changes, whereas focal epithelial changes show high-grade alterations; they tend to progress to high-grade mucinous adenocarcinomas of the appendix, and the tumor tissues encompass the whole layer of the appendix to the outer serosa. Part of the free mucus tissue was also seen (Figure 4a). The root of the appendix showed lumen-like tissue, smooth muscle, no mucosal epithelium, local calcification, and no clear tumor tissue (Figure 4b). 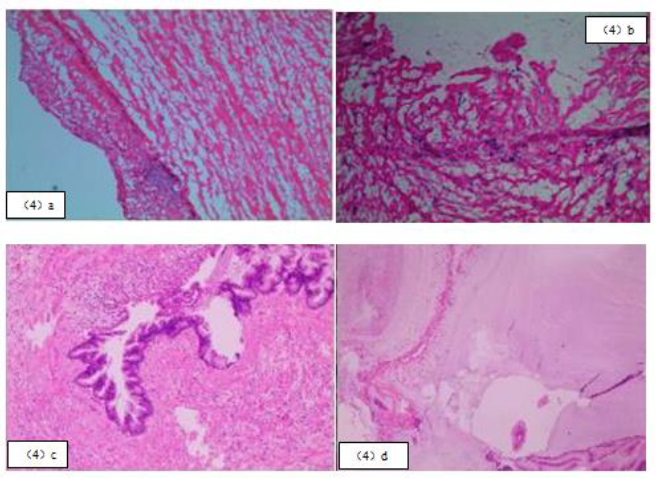 Mucinous tumor components were not found in the mucous layer and muscular layer of the intestinal wall. Mucus and calcified tissue were seen in the serous layer of the local intestinal wall, which was considered to be involved in appendiceal mucinous tumors; tumor tissues were not found in the lateral incisal margin of the small intestine and large intestine. Four lymph nodes were examined but no tumor tissues were found (Figure 3C). Immunohistochemical results showed positivity for cytokeratins (CK), CD X Mel 2, carcinoembryonic antigen (CEA), Ki-67 protein (approximately 20% +), and a few p53 cells. On the fifth day after the surgery, the abdominal drainage fluid suddenly increased, the color intensity increased to bright red, but there were dark red exudates at the orifice of the drainage tube, and flaky dark red subcutaneous ecchymosis could be seen in the waist and abdomen. Check Fibrinogen(Fbg )0.97 g/L, and fibrinogen was infused with 10 units of cryoprecipitate, and Fbg 0.80 g/L, 0.92 g/L, and PT 14.7 seconds. PT/R 1.29, PT international normalized ratio 1.30, PT% 57.2%, TT 21.3 seconds, D-Di 15.99 (mg/L) (Figure 5a, 5b, 5c, 5d, 5e, 5f, 5g for specific changes and distribution between groups before and after surgery).

The drainage fluid from the abdominal cavity and pelvic drainage tube gradually increased, and the color deepened. Concurrently, the hemoglobin concentration decreased gradually from 115 g/L to 90 g/L, 71 g/L, and 64 g/L after the surgery. Blood concentration was considered, but the color and volume of drainage fluid changed, and the concentration of hemoglobin decreased greatly. Chronic abdominal bleeding was investigated, and disseminated intravascular coagulation could not be ruled out. Cryoprecipitate, virus-inactivated plasma, suspended red blood cells, and human serum albumin injection were infused. Simultaneously, symptomatic support treatment such as aminomethylbenzoic acid hemostasis and intravenous injection of vitamin K to improve blood coagulation function and strengthen anti-infection were administered, while fibrinogen injection was infused to maintain the blood fibrinogen level at approximately 1.50 g/L. After active conservative treatment, the abdominal and pelvic drainage of the patient decreased, and the color gradually faded. On the ninth day after the surgery, the concentrations of hemoglobin, D-Di, and Fbg were 88 g/L, 24.92 mg/L, and 1.81. g/L, respectively. During this period, 40 g of human albumin injection, 7 g of Fbg, 1.5 units of suspended red blood cells, 26 units of cryoprecipitate, and 300 mL of virus-inactivated plasma were infused. Nineteen days after the surgery, the patient was in a stable condition, and the abdominal cavity and pelvic drainage tube were removed; she recovered and was discharged from the hospital.