Posterior amorphous corneal dystrophy (PACD) is classically characterised by bilaterally thin and flat central corneas with a deep, stromal sheet-like opacity. The epithelium, Bowman's layer, and anterior stroma are usually normal in PACD. Here, we report a case that had bilaterally anterior oval amorphous corneal opacities, which is different from the typical presentation of PACD. Corneal stromalysis occurred in them with progression to descemetocele unilaterally. To our knowledge, Scheimpflug images of anterior amorphous opacities especially with spontaneous corneal stromalysis and descemetocele are poorly reported in literature. Hence the objective of this manuscript was to throw light to the lacunae in literature, by describing the Scheimpflug images of this rare keratopathy in default and inverse contrast for better quantitative framing of the pathology.

We report a case of anterior oval amorphous corneal opacities OU (Figure 1), which is different from its typical presentation. To add on; in this scenario, bilateral spontaneous corneal stromalysis had occurred with progression to descemetocele unilaterally OS. These anterior amorphous opacities were relatively transparent and were not associated with systemic or autoimmune diseases in this 66 year old female. Keratometry and corneal topography revealed a flat K (K1 8.00D@109°, K2 34.49@19° OD; K1 17.44@58°, K2 31.23@148°) in the central cornea. Anterior segment optical coherence tomography (AS-OCT) revealed (Figures 2 and 3) anterior hypo-reflective abnormalities in the amorphous opacities and some deep hyper-reflective opacities. 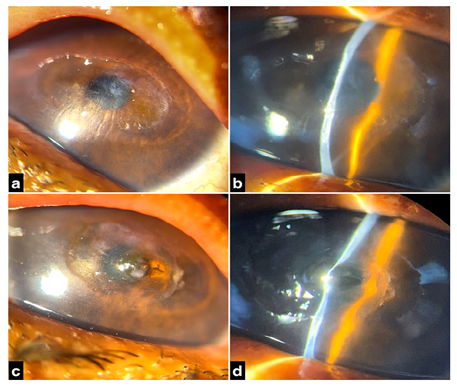 Figure 1a, b- Slit-lamp bio-microscopy in diffuse and slit examination respectively, showing an horizontally oval sheet-like opacity in the central, thin and flat cornea with Descemet folds associated with amorphous paracentral whitish deposits in OD. 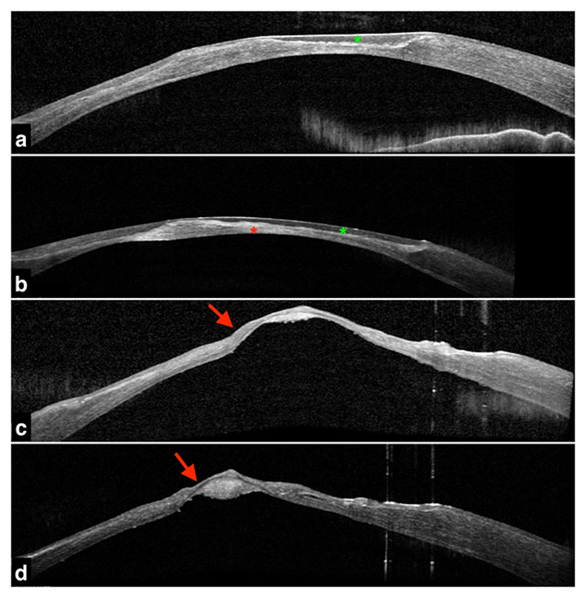 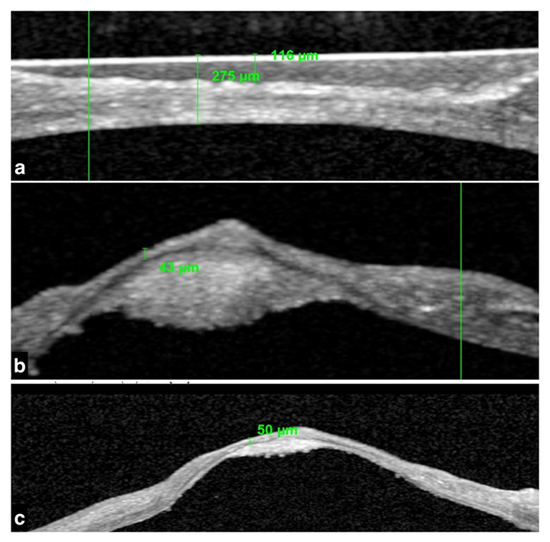 PACD is a rare, autosomal dominant disorder. The affected individuals classically demonstrate partial or complete posterior lamellar corneal opacification with decreased corneal thickness and flattening of the corneal curvature. Significant phenotypic variability exists; however, not only in the severity of these corneal findings, but also in the expression of a number of other associated abnormalities of the anterior ocular segment, including scleralization of the peripheral cornea, iris coloboma, corectopia, iris atrophy, and iridocorneal adhesions [4-12].

The anterior amorphous opacities in this case were relatively transparent and had vesicle-like appearance, which is different from the typical presentation. Despite multimodal imaging (Figure 4), we still cannot rule out the possibility of other variants of PACD. Additionally confocal imaging and histopathological examination are warranted [13] . Also, presumably if a corneal epithelium defect occurred, due to trivial trauma at the amorphous vesicle, these opacities melted easily and progressed to descemetocele within a short period [14]. To our knowledge, anterior amorphous opacities with spontaneous corneal stromalysis and descemetocele are poorly reported in literature. Hence this manuscript, aimed to throw light, by describing this rare keratopathy with Scheimpflug images. 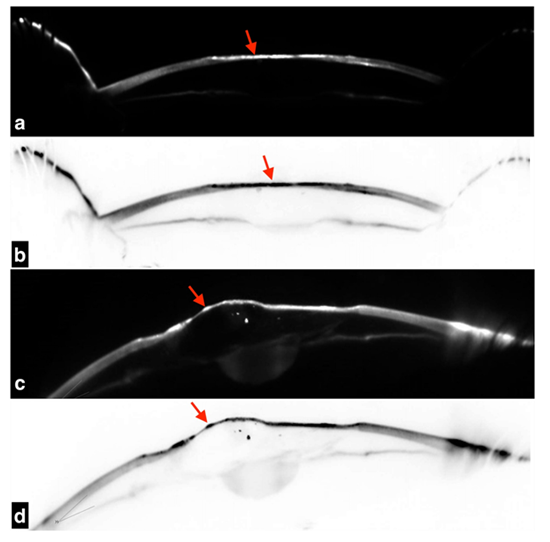 Genome-wide linkage analysis performed on the largest PACD family identified to date demonstrated a linkage to a 3.5 Mb region on chromosome 12q21.33. In total 26 genes were mapped to this region. Out of the 26, four of them namely, keratocan, lumican, decorin and epiphycan; encode small leucine-rich proteoglycans (SLRPs), a family of proteins involved in collagen fibrillogenesis and matrix assembly. In the cornea, these SLRPs are bound to glycosaminoglycans, thus forming the ground substance of the cornea [4]. They play an essential role in the maintenance of corneal transparency. Mutations in the SLRPs have been associated with corneal pathologies involving corneal clarity and curvature. Missense and nonsense mutations in keratocan are implicated in autosomal recessive cornea plana [15,16]. Nonsense mutations in decorin are implicated in congenital hereditary stromal dystrophy. PACD is however associated with a deletion of keratocan, lumican, decorin and epiphycan [17,18]. The implication of the deletion of the SLRP gene cluster forms the genetic basis of PACD. This provides additional evidence of the role of these genes in the development and maintenance of corneal clarity. PACD is associated with haploinsufficiency of SLRPs on chromosome 12, and is primarily caused by it.

This case may be an atypical variant of PACD or other types of the rare amorphous corneal dystrophy/degeneration. Further genetic studies with genome-wide linkage analysis for more cases are needed to clarify this rare keratopathy.

To our knowledge, scheimpflug images of anterior amorphous corneal opacities, especially with spontaneous corneal stromalysis and descemetocele are poorly reported in literature. Hence the objective of this manuscript was to throw light to the lacunae in literature, by describing the Scheimpflug images of this rare keratopathy in default and inverse contrast for better quantitative framing of this pathologic process.

The authors certify that they have obtained all appropriate patient consent forms. In the form the patient(s) has/have given his/her/their consent for his/her/their images and other clinical information to be reported in the journal. The patients understand that their names and initials will not be published and due efforts will be made to conceal their identity, but anonymity cannot be guaranteed.