Methods: From January 2017 to December 2018, 31 patients with portal hypertension of liver cirrhosis in Zhejiang Provincial people’s Hospital were treated with LSPD surgery with the ligation of proximal SV.

Conclusion: LSPD combined with ligation of proximal SV is safe and feasible, and short-term follow-up can effectively prevent the formation of PVT after operation.

PVT is one of the most serious complication after LSPD [1, 2]. In patients with portal hypertension, most paper shows the incidence of PVT after LSPD is as high as 22.3% to 37.5%, some paper even reports the incidence rate of PVT after LSPD is higher than 50% [3, 4], which will cause a further increase in portal venous pressure, and will increase the rate of rebleeding of esophageal and gastric varices after LSPD surgery, and the difficulty of liver transplantation if necessary. Several systemic and local risk factors for PVT after LSPD have been identified. Systemic diseases include lymphoma [4], hemolytic disease [5, 6] and myeloproliferative disorders [5]. Local risk factors are mainly related to spleen characteristics such as splenomegaly [3, 4], preoperative SV diameter [2], splenic weight [2, 4-8], and splenic length [9], etc. However, the specific mechanisms of the development of PVT after splenectomy remain under investigation.

Among them, splenic vein thrombosis (SVT), which is an important factor leads to PVT. PVT is often attributed to the spread of SVT [6-7]. How to effectively prevent the forming of PVT after LSPD is the focus of clinical research [3-5]. The distal side of SV was blind after splenectomy, the blood flow velocity decreased sharply and formed turbulence, ligation and suture of splenic pedicle caused the injury of SV endomembrane, all of which will cause the SVT. The incidence of SVT is extremely high in clinical observation, and the occurance rate has been reported to be more than 90% in some paper [9-11]. How to block SVT to spread to superior mesenteric vein (SMV) or portal vein (PV) trunk may be a research direction to prevent PVT after LSPD operation. The authors carried out LSPD for more than 10 years. The number of cases were more than 200. The procedure was simplified and standardized, and the improved four-step method was summarized [12, 13]. In order to decrease the incidence of postoperative PVT, based on previous work, we have innovatively applied laparoscopic splenectomy with proximal SV ligation. We performed this technique in recent 31 cases of LSPD. The results of short-term follow-up have been satisfactory, and the report is as follows.

General data from January 2017 to December 2018, 31 patients with posthepatitic cirrhosis associated with hypersplenism due to portal hypertension underwent LSPD with the ligation of proximal SV, all of whom 18 patients were male, 13 patients were female, aged 51.87 ± 7.11 years. Child-Pugh grade of liver function 21 pateints were grade A, 10 patients were grade B, no Child-Pugh grade C, preoperative ICG R15 were 15.68 ± 19.27. 24 cases with moderate hypersplenism and 7 cases with severe hypersplenism were assessed by CT or MR before operation. All patients and their families signed informed consent. Indications: Patients generally in good condition, no serious heart, kidney, lung and other important organic diseases. Preoperative diagnosis: cirrhosis, portal hypertension, severe esophageal and gastric varices, hypersplenism. Grade A or B of liver function. Any of the following is LSPD indication: (1) the portal hypertension caused by various causes and has a history of esophageal and gastric variceal bleeding, and there is portal blood flow to the liver; (2) there was no history of gastrointestinal bleeding, cirrhosis, but hypersplenism with severe varicose veins, positive red sign.

Figure 1: (a) and (b) The ligation position of proximal splenic vein. 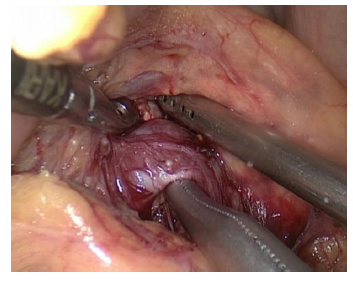 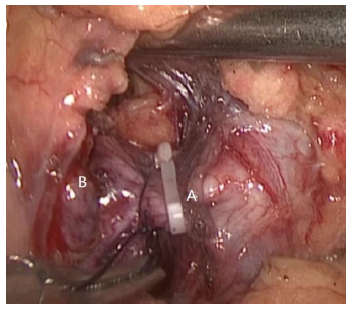 Absolute diet, gastrointestinal decompression, liver protection, infusion of plasma, albumin and diuretic treatment. No hemostatic. On the second day after operation, the gastric tube was removed, take liquid diet, the drainage volume and amylase value of the drainage fluid were monitored, and the changes of hemoglobin, platelet and liver function were monitored. Aspirin was taken 3 days after surgery (100 mg, once a day). All patients underwent a CT scan with contrast enhancement at POD 6 ± 1.

All the 31 patients were successfully performed without hand assistant or converted to open laparotomy. The operation time were 139.35 ± 19.48 min, blood loss were 138.06 ± 54.49 ml. PHS was 8.26 ± 1.59 days. There were 4 patient occurred postoperative PVT, among them 2 patients were degree I and 2 patients were degree II. There are no severe postoperative PVT cases. There were no postoperative cases of abdominal infection, pancreatic leakage, abdominal hemorrhage, liver failure and upper gastrointestinal bleeding. At 1 and 6 months after operation, there were no PVT found by color Doppler ultrasonography and enhanced CT in the other 27 patients.

Surgery is still the major method for the treatment of portal hypertension. Excision of pericardial blood vessels with giant spleen is one of the main methods. Laparoscopic technique has been widely used in portal hypertension surgery in recent years. The popularization and application of LSPD should do more studies in clinic. The author's team improved the technique of spleen subpedicle severance, which was summarized as improved four-step method [12], that is, the splenic artery was ligated in advance, the splenic pedicle tunnel was established, the splenic pedicle was cut off by the stapler, and the gastric coronal vein was cut off by the stapler. The success rate of operation was improved significantly, the blood loss was reduced, the postoperative recovery was accelerated, and the PHS was shortened.

Postoperative PVT is a common complication of LSPD, which seriously affects the prognosis of patients, and sometimes will be a major problem of liver transplantation. PVT was retrospectively graded according to the operative findings: Grade 1: <50% PVT minimal obstruction of the SMV; Grade 2: grade 1 but >50% PVT; Grade 3: complete PV and proximal SMV thrombosis; Grade 4: complete PV and entire SMV thrombosis. There were often no symptoms of PVT when PVT is grade 1 and grade 2. An unknown cause of fever (>38) or unexplained abdominal pain after the splenectomy was suspected of SVT. The wide and rapid formation of PVT including the SMV and the inferior mesenteric vein (IMV), may completely block the venous return, which may cause the mesenteric artery to contract and cramp, causing a life-threatening complication, including intestinal ischemia, intestinal infarction, peritonitis or with fulminant infections, blood stool, fever, acute ascites, metabolic acidosis and multiple organ failure.

The mechanism of the formation of the PVT is complicated. The present studies showed that the changes of platelet count, the changes of coagulation factors and the changes in portal and splenic venous blood flow may be associated with the formation of the PVT after splenectomy [1-2]. Among them, SVT, which is an important factor leads to PVT. PVT is often attributed to the spread of SVT [4-5, 14]. Johns Hopkins’ Broe [15] proposed that ligating SV at the left side of inferior mesenteric vein during splenectomy surgery could effectively reduce the formation of PVT. He thinks ligation at this point could reduce the length of the blind end of SV and may prevent the forming of SVT. We believe that the ligation at the left side of inferior mesenteric vein could cut off the spread of SVT at the blind end, but since there is only blood flow from the IMV, the blood flow in the proximal SV decreases dramatically, while the SV is much wider than IMV, and the velocity of the blood flow in the SV drops sharply. The formation of turbulence, can also cause thrombosis. We propose an operational method that ligation at the confluence of SV and SMV, the thrombosis from the blind end of SV can be isolated effectively. When we take this step, there is small collateral vessels at the proximal SV, so it is easy to dissociate SV at this point from the posterior of the pancreas, and laparoscopic operation has even more advantageous. Our clinical practice also showed that the procedure of ligation at the proximal of the SV only took 10 to 15 minutes, which was quite safe and feasible, without additional bleeding, pancreatic injury or other complications.

On the basis of routine operation of more than 200 cases of LSPD [12-13], we took this new technique on 31 cases of LSPD. Six months follow-up demonstrated that there were 4 patients with postoperative PVT, among them 2 patients were grade I and 2 patients were grade II. There were no grade III or grade IV postoperative PVT after surgery and there were no severe complications in those 4 cases. We think the key point of the operation is the proper ligation location. Too far away from the PV may cause some SV to become the new blind end and develop thrombosis. Our experience considered the length of the ligation point from the confluence is 1/2 the width of the SV. After ligation, the splenic venous wall becomes part of the portal venous wall, which could effectively reduce the distortion and stenosis of the PV (Figures 1-4). The application of proximal SV ligation could not only reduce the formation of PVT but also block the spread of SV, which could effectively reduce the incidence of PVT.

In conclusion, LSPD combined with proximal SV ligation is safe and feasible, and short-term follow-up showed this method could effectively prevent PVT after operation. We believe that this technique can be more applied in clinic. However, the number of cases is still accumulating, and the occurrence of PVT is related to many factors, the long-term effect needs to be further observed and more confirmation.