Ear trauma are common injuries in the facial area. Laceration in particular may present a challenge to restore normal anatomical position and maintain an acceptable aesthetic appearance. We present a technique in treating an extensive tragal laceration in middle age male and current management in tragal trauma.

Tragal reconstruction has multiple techniques described in the literature. Using flaps or the concha, lobule and costal cartilage graft [1-4]. Previously tragal reconstruction were to create a pretragal depression and maintain a good tragus projection conceal the external auditory meatus and a hidden scar [5]. human ear vascular supply of the anterior part arises from several branches of the superficial temporal artery, and the remaining of the ear is supplied by the posterior auricular artery. the embryology of the formation of the ear from the six ear hillocks explains These patterns [6, 7].

43-year-old male presented to the emergency room after RTA (road traffic accident) by the ambulance. We were consulted in regard to his ear trauma after a sharpened windshield glass went through the ear. Patient initial examination was done by the appropriate teams. On local examination patient had right deep ear laceration involving tragus ad helicis crus. EAC (external auditory canal) and tympanic membrane was intact with blood clots remnant. After obtaining consent local block has been applied with 1% lidocaine using 1cc needle then all debris and clots were cleaned preforming gentle mechanical debridement with gauze around the finger to assure removal of all remnant. To avoid any misplacement of the suture and in the absence of assistance the iodine antiseptic stick Figure 1, introduced in the EAC meatus to maintain tragus in normal anatomical position Figure 2. After that cartilage and laceration were approximated in 2 lyres using 0.6 simple interrupted suture technique Figure 3, finally fusidic acid ointment 20 mg/g applied around the suture and a small cotton ball soaked with ointment to clog the EAC with minimal dressing. Patient was discharged with oral antibiotic and appointment in the clinic. 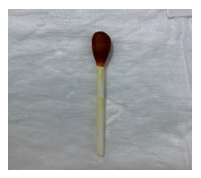 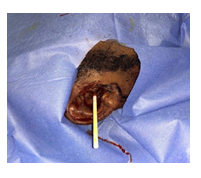 Figure 2: Tick in the EAC meatus. 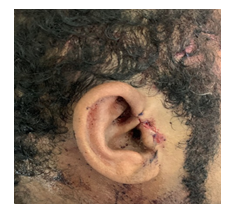 Normal ear aesthetic importance was recognized as early as 900 BC. Partial reconstruction of the earlobe was carried using a cheek flap [8]. A meta-analysis of 326 injured ears, showed that the most omen cause were found to be RTA related (35.9%) [9]. In the modern era tragus has gained a solid functional importance since the innovation of earphones as they were engineered to be dependent on it in order to maintain position. patients inability to wear earphones and earplugs were a major complaint [10]. In the total absence of tragus Li GF et al. [11] preformed reconstruction of tragus and external acoustic meatus using remnant ear. In the literature there are Few reports in regards to isolated tragus reconstruction Martinez et al. [12] described single stage technique using a transposition flap based on the earlobe rotated 180 degree to reconstruct the tragus hiding the auricular canal and, creating projection. Adler et al. [5] also described a single-stage transposition flap taken from the preauricular area, to restore the pretragal depression and create good projection. Coombs and Lin [13] they used a two-stage procedure with a chondrocutaneous transposition flap taken flap from the posterior aspect of the conchal bowl an inferior based flap transposed anteriorly as an interpolation flap. After 10 weeks it is divided in the second stage. Scars are hidden in the postauricular sulcus, and tragal projection is maintained.

The method we describe here by inserting an antiseptic stick it will block the EAC so no fluid or blood will enter during treatment. It will eliminate the need to do a stay suture through the tragus while repairing, also the surgeon will be able to work in ease by elevating or tilting the tip of the stick and maintaining EAC patency. Those factors contribute to final results preventing depression or over projection of the tragus.

Tragus has an important functional and aesthetic element; care should be taking during assessment and repair of the injury. A cotton stick or antiseptic in our case it serves a simple solution to maintain accuracy during suturing. As far to our knowledge this method has not been described in the literature.

The authors declare that there are no conflicts of interest regarding the publication of this article.