Three Substantial Reasons not to Band

Department of Surgery, Clinic for General- and Visceralsurgery, University of Freiburg, Freiburg, Germany

Bariatric surgery is known to be the most effective treatment of weight loss and diabetes mellitus type 2 [1]. Due to its perceived low operative risk, laparoscopic gastric band (LAGB) implantation was the second most frequently used bariatric procedure until 2008 [2]. Currently, bariatric surgeons perform more gastric band removals than implantations due to relevant gastric complications and poor weight loss. Revision rates can be as high as 70% [3]. A recently published article reviewing more than 50000 patients after LAGB concludes that this procedure: “does not appear to provide a long-term solution for obesity” [4]. As a striking example of the hazards of an apparently low-risk procedure, we present a case combining multiple severe complications of a gastric band in one patient.

A 42 year old woman with a BMI (body mass index) of 36.7 kg/m2 (100 kg, 165 cm) presented with acute upper abdominal pain and mild dysphagia without any signs of infection in our outpatient clinic. The bariatric history revealed a gastric band implantation 6 years prior. 2 years later, the port of the gastric band system had to be removed due to a port site infection. From an initial BMI of 45.9 kg/m2, the patient went to a minimum BMI of 29.4 kg/m2 two years after the operation. Upper gastrointestinal (GI) endoscopy revealed an intra-gastric band migration (A). A consecutively performed computed tomography scan (CT) showed, in addition to the band migration itself, a migration of the gastric-band connecting tube into the first jejunal loop (star, D). Tube migration was confirmed by a second endoscopy, showing a tube entry point just distal of the papilla vateri (C). Due to the double penetration of the gastric band and the connecting tube, we decided for operative band removal.

On the admission day, the patient presented with an anemia (hemoglobin 10.6 g/dl, range 12-18 g/dl) and mildly elevated sings of infection (white blood cells (WBC): 8400/µl, range 4000-10,000/µl; C-reactive protein (CRP): 8, range <5 mg/dl). We performed a laparoscopic band removal, closing the stomach defect with a running suture. The connecting tube of the gastric band had created a long canal of scar tissue up to the duodenal penetration site. This circumstance allowed for clip application to the scar canal only, for closure of the duodenal defect. An intraoperative methylene blue test confirmed closure of both sites. Additionally, intraoperatively we found parts of the gastric band and connecting tube surrounded by splenic tissue (B), indicating a band associated splenic erosion. The spleen was dissected until the intra-splenic part of the tube could be visualized and removed completely. Local hemostasis was achieved applying a collagen fleece. The redo surgery lasted 170 min. 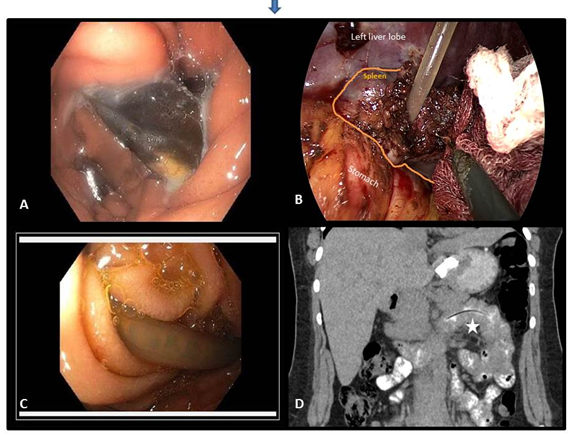 On the second postoperative day, the patient presented with high signs of infection (WBC 20,800/µl, CRP 444 mg/l). The performed CT scan showed perisplenic fluid without any CT morphological signs of infection. A persisting high CRP value of 429 mg/l lead to a second CT scan now revealing a superinfection of the already initially diagnosed perisplenic fluid, causing an abscess. Antibiotics were applied. Immediate laparoscopic revision confirmed the presence of the presumed abscess, which was opened and drained. An intraoperative air test proved tightness of the initial gastric suture. Possibly either the initially escaped fluid from the gastric leak after band removal or a transient, small insufficiency of the gastric suture had to be responsible for abscess formation. Postoperative recovery was now uneventful. The patient received antibiotic treatment for 10 days postoperatively until WBC was within normal range. Food built-up was completed upon discharge on the 12th postoperative day. The patient presented again in the outpatient clinic for a routine check-up one month after discharge. At that time the patient was in an excellent condition. All symptoms, especially the initial dysphagia, had resolved completely.

Revisional surgery after LAGB is a prominent issue [3]. Typical causes for revision are insufficient weight loss, pouch dilatation, band slippage and dysphagia [5]. In contrast to band implantations, band revisions are steadily increasing [7]. Of note, overall morbidity for band removal alone is higher than of primary band implantation [7]. Gastric band migration occurs in about 2.5% [10]. Bands primarily migrate into the stomach and can afterwards be found in various parts of the GI tract [10, 11]. With respect to the degree of migration and position in the GI tract, bands can be removed endoscopically or surgically [11, 12]. However, migration may prompt surgeons to even use open surgery when revising [6].

When revising patients after LAGB, intra-gastric band migration should be excluded preoperatively, by endoscopy in all patients scheduled for band removal. A combined tube migration/penetration into the GI tract itself is extremely rare, but documented [13]. Described positions are small intestine and colon [13, 14]. A migration into the duodenum is presented for the first time. In the current case port explantation, leaving a blunt end of the connecting tube in the abdomen, probably was the underlying cause. Of the few cases pointed out in the literature, the majority of the tubes had been disconnected likewise. [13]. Tailored approaches are necessary in these rare events. Also, splenic affections by gastric bands have been described, a migration into to the spleen to such an extent as pictured here is unique [15].

Particularly, the coincidence of an intragastric migration in combination with splenic erosion in one patient is an extremely rare case of multiple band associated complications. Yet, it impressively illustrates the potential life-threatening risks of LAGB surgery. Moreover the necessity for a preoperative endoscopy and upper GI-series is demonstrated vividly, when revising these patients. Possibly, a routine screening endoscopy 3 to 5 years after primary LAGB surgery might be warranting for the early detection of band migration.

None of the authors have any conflict of interest to disclose.