Introduction: Our purpose is to report the clinical presentation of a rare coexistence of pyloric stenosis, peptic esophageal stricture associated with hiatal hernia, and discuss the therapeutic strategy decided with criterion of decision-making and outcome.

Conclusion: To our knowledge we report the first case of duodenal ulcer with pyloric stenosis associated with esophageal peptic stenosis and hiatal hernia reviewed in literature. The condition can be arguably considered as a complication of gastric emptying delay due to pyloric stenosis, and triggered by the duodenal ulcer disease in addition to hiatal hernia. Association of endoscopic dilation and Roux-Y gastrojejunostomy diversion after antrectomy and bivagotomy in our case meets all the requirements. Indeed the approach enables further exploration of the stomach comforting the histological diagnosis of benign strictures, treat the surgical stricture, reduce volume of toneless dilated stomach, and treat GERD. Nissen fundoplication is not indicated.

The patient was a 67-year-old North African man, chronic smoker with history of gastric ulcer at the age of 31 years-old. Clinical evolution was clear until 2009 when the patient reported experiencing gastroesophageal reflux syndrome worsened progressively until 2012 where symptoms of dysphagia occurred, associated with vomitus, which mainly consisted of undigested food. The patient also reported abdominal distention and discomfort with persistence of abdominal pain. His medical history assessed a weight loss of 19kg over 9 years.

Physical exam revealed abdominal wheelbase in the epigastric area. The remainder of the examination was standard except a BMI of 16.56. The patient’s biology tests revealed no hydroelectrolitic disorders. An upper endoscopy (EGD) demonstrated regular, fibrous and impassable stenosis beginning 32cm from the incisor teeth. No biopsy could be taken. To complete further exploration of the digestive tract the patient underwent barium-meal examination of Oeso-gastroduodenal transit revealing extended central stenosis of the lower esophagus. The barium-filling imprint showed a dilatation of the middle and upper esophagus, thus marking a luminal diameter disparity (Figure 1.1). The images revealed in addition a stasis stomach with antrum mark attaining the pelvic area and post-bulbar double bubble appearance (Figure 1.2). A contrast-enhanced abdominal computed tomography (CT) Scan showed stasis stomach on pyloric stenosis. The clinical presentation and the examination findings comforted the diagnosis of a benign esophageal stricture. 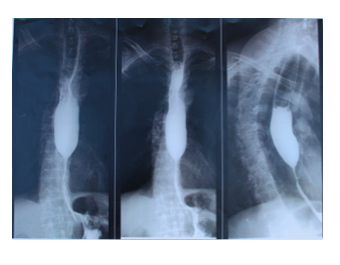 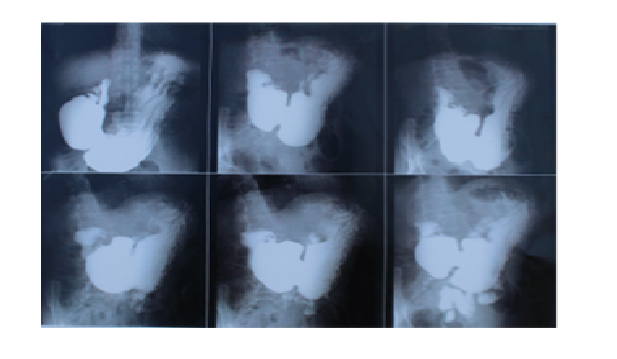 The therapeutic strategy decided was an endoscopic eosophageal dilatation and medical preparation followed by an antrectomy and Roux-en-Y diversion surgery. Upper endoscopy (EGD) with Endoscopic dilatation was preceded by two consecutive weeks of medical preparation consisting of double dose of Proton Pomp Inhibitor medication. The upper endoscopy showed a persistence of the fibrous central stenosis. Dilation succeeded applying a pressure of 2 to 4 ATM (Automated Teller Machine) with balloon dilators. Exploration of the stomach proceeded showing a stasis stomach with large dilatation. In total five biopsies were taken, three from the antrum and two from the fundus, showing a chronic funditis and chronic antritis, a stomach Helicobacter Pylori free, and no sign of metaplasia or dysplasia. The pyloric stenosis appeared morphologically homogeneous and symmetric without induration nor inflammatory signs. Thereafter, the operation went under general anesthesia by median laparotomy due to previous surgical intervention. Surgical Exploration found a stasis stomach presentation. Antrectomy was performed followed by a Roux-en-Y anastomisis. The surgery was uneventful and the anatomo-pathology examination of the operative specimen confirmed no malignancy.

We experienced a rare association of co-existing pyloric stenosis and peptic esophageal stricture, described in published literature in very few articles since 1979 [3]. The treatment of peptic pyloric stenosis is inevitably surgical, but medical preparation is nonetheless key to better outcome, aiming to regulate ulcer activity, restore hydroelectrolitic disorders if there is, and improve patient’s general condition. Three surgical techniques are possible: antrectomy with gastroduodenostomy (Billroth I), with gastrojejunostomy (billroth II), and most recently antrectomy with Roux-Y gastrojejunostomy; all associated with a selective vagotomy. Billroth I and Billroth II were the most used methods of alimentary reconstruction following gastric resection for decades, meanwhile since its introduction by Anton Wolfer in 1883 Roux-en-Y has gained acceptance and proved effectiveness in the management of bilious vomiting, retro anastomotic herniation, blind loop syndrome and dumping syndrome [4]. In an article of duodenal ulcer disease cases studies comparing gastroduodenostomy with Roux-Y gastrojejunostomy after antrectomy and selective gastric vagotomy demonstrated that Roux-Y gastrojejunostomy procedure was effective in preventing bile reflux [4]. However, postoperative complication and clinical course, such as morbidity rate were similar [4]. Therefore we chose Roux-Y gastrojejunostomy after antrectomy technic.

The treatment of peptic esophageal stricture on the other hand is consensual and includes a variety of therapeutic options, including balloon dilation, temporary stent placement, surgery, intralesional steroid injection and incisional therapy. The treatment selection follow an algorithm previously described by van Boeckel and Siersema, which starts by Endoscopically or fluoroscopically guided dilation [5] which is a safer, rapid and economical alternative. Considering the co-existence of both conditions with an important toneless stomach stasis and imbalance of gastric emptying due stenosis of both ends, we decided to initially dilate the peptic esophageal stricture and carry on Roux-Y gastrojejunostomy after antrectomy with bivagotomy. The association of both techniques meets all requirements. Indeed the endoscopic dilatation enable further exploration of the stomach and comfort the histological diagnosis of benign stricture, while Roux-Y gastrojejunostomy after antrectomy with bivagotomy allows to reduce gastric stasis and treat the stricture, the gastric reflux and finally the ulcer.