Methods and Results: Platelet aggregometry and flow cytometry analyses revealed pathological platelet function and decreased platelet delta granule secretion. Using NGS panel analysis comprising all 10 HPS genes a defect in the HPS1 gene was identified. The brothers share compound heterozygous a novel splice variant (c.987+1[G>A]) and an already reported mutation (c.1189[delC]). Although the third patient is not related with the brothers, he presented with the same one base pair deletion c.1189[delC] compound heterozygous with another already reported base pair deletion (c.355[delC]).

Conclusions: Since HPS1 patients are at risk to develop pulmonary fibrosis at middle age, early genetic diagnosis of the HPS type is important for prognosis and treatment. In this study we identified a novel splice site variant (c.987+1[G>A]) in the HPS1 gene, diagnosed the patients as HPS1 type and therefore, enabled adequate follow-up and therapy.

Hermansky-Pudlak syndrome (HPS) was first described by F. Hermansky and P. Pudlak in 1959 [1]. The mode of inheritance is autosomal recessive. The characteristic main symptoms are bleeding tendency and oculocutaneous albinism with congenital nystagmus, iris transillumination, decreased visual acuity and reduced skin pigmentation [2]. Bleeding symptoms range from epistaxis, petechiae to easy bruising and may cause serious problems in the case of trauma or surgery. So far, in humans ten HPS types (HPS1-10) have been described, some of which are associated with pulmonary interstitial lung disease, granulomatous colitis and in case of HPS2 and 10 with immune deficiency [3]. Cause for the development of HPS is a malfunction of lysosome-related organelles such as delta granules and melanosomes which are vital for membrane and protein trafficking [4]. Platelet delta granules contain serotonin, calcium, ADP and polyphosphate. In healthy individuals the content of delta granules is secreted to enhance platelet adhesion and activation [5]. The malfunction of delta granules in platelets causes the bleeding tendency and the malfunction of melanosomes explains the albinism.

HPS is a rare disease with a prevalence of 1-9 per 1,000,000 individuals [3]. Prevalence is much higher in some populations and goes up to 1 in 1800 in Puerto Rico due to founder effects [6]. Pathogenic variants can be found in 10 HPS associated genes (HPS1, AP3B1, HPS3-6, DTNBP1, BLOC1S3 BLOC1S6, AP3D1). The HPS genes encode for multi-protein complexes called biogenesis of lysosome related organelles complex (BLOC). BLOC 3 contains the gene products of HPS1 and HPS4 [7]. HPS1 is located on chromosome 10 (10q24.2). The gene comprises 20 exons and codes for a 700 amino acid polypeptide with a predicted molecular weight of 79,3 kDa. There are 76 known variants associated with the HPS1 phenotype [3]. HPS1 is the most described genotype in patients. According to the literature HPS1 and HPS4 seem to display the most severe HPS phenotype regarding pulmonary interstitial lung disease and granulomatous colitis [3, 8]. Here, using panel sequencing we identified a novel essential splice site mutation and already reported pathogenic HPS1 variants in three patients with classic HPS phenotype.

Two brothers, 10 and 6 years old (A-II.1 and A-II.2) presented with oculocutaneous albinism and nystagmus at our outpatient clinic. In addition, both brothers showed easy bruising after minor trauma and prolonged bleeding after injuries. At the age of seven years patient A-II.1 underwent circumcision, surprisingly, without bleeding problems. So far, the younger brother (A-II.2) has not undergone any surgery. The non-consanguine parents (A-I.1 and A-I.2) were not affected clinically.

The 12 year old index patient (B-II.2) presented at our outpatient clinic with cutaneous albinism and had experienced prolonged bleeding after dental surgery. However, he did not show any bleeding symptoms during and after appendectomy. At the age of 11 years a rectal abscess was surgically removed. Afterwards he developed wound healing problems which lasted for about 12 months. His non-consanguine parents (B-I.1; B-I.2) and older brother (B-II.1) were not affected clinically.

Informed consent for molecular genetic analysis was given for all family members. Genomic DNA was extracted from EDTA-blood using standard procedures and the Blood and Cell DNA Kit from Qiagen (Qiagen GmbH, Hilden, Germany). For the affected patients we performed targeting enrichment (panel including all 10 HPS-genes) using Nextera Rapid Custom Enrichment Kit (Illumina) followed by sequencing on a MiSeq (Illumina). For data analyses SeqPilot (JSI medical systems) was used. Variants were exported and filtered according to allele frequency and serious consequences. For classification we used supporting software ALAMUT® (v.2.15), pathogenicity prediction (SIFT, MutTaster, PolyPhen2 and CADD), occurrence in population and disease databases (HGMD public version, Huizing HPS Mutation update [3]). Variants were classified in accordance to the ACMG (American College of Medical Genetics) guidelines [10]. To validate our findings and for family genotyping Sanger sequencing was performed.

Both affected brothers from family A (A-II.1 and A-II.2) presented with normal platelet counts (394 G/l and 347 G/l, respectively). The patient from family B (B-II.2) also showed normal platelet count (404 G/l). In vivo bleeding time (Ivy) was performed for two patients A-II.1 and B-II.2, respectively and was severely prolonged (10 min and 10,5 min, respectively; normal <6 minutes). The brothers of family A showed impaired aggregation after stimulation with low dose collagen (2,0µg/mL), ADP and epinephrine. The patient from family B (B-II.2) reached almost normal values (Table 1).

In flow cytometric analyses the two brothers (A-II.1 and A-II.2) and the unrelated patient (B-II.2) showed severely reduced CD63 expression hinting to a delta granule secretion defect (figure 1D-F). All patients showed slightly reduced CD62 expression (figure 1A-C). Additional fibrinogen binding after ADP activation was slightly impaired for patient A II.1. Expression of CD42a, 42b, 41 and VWF-binding after stimulation with Ristocetin were normal compared to healthy controls for all patients (data not shown). 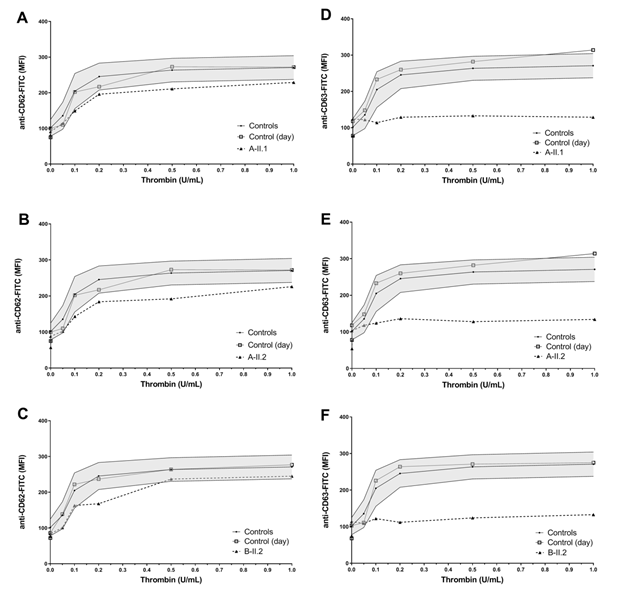 We identified compound heterozygous pathogenic variants in the HPS1 gene (NM_000195.3) in all patients. Both affected brothers of family A presented with a novel essential splice site mutation (c.987+1[G>A]). The consequence of this mutation at the donor splice site of intron 11 is not predictable but leads very likely to skipping of exon 11. To our knowledge this mutation has not been described so far. The second variant was a one base pair deletion (c.1189[delC]) in exon 13. This leads to a frameshift with premature stop codon (p.Gln397Serfs*2). Sanger sequencing identified the mother (A-I.2.) as heterozygous carrier of the c.1189[delC] variant, no material was available from the father (A-I.1) (Pedigree figure 2). The same 1-bp-deletion (c.1189[delC]) was also identified in patient (B-II.2), compound heterozygous with another 1-bp-deletion (c.355[delC]; p.His119HisThrfs*5) in exon 5 leading also to a frameshift with premature stop codon. Sanger sequencing identified the father (B-1.1) as heterozygous carrier of the c.355[delC] variant whereas the mother (B-1.2) was a carrier of the c.1189[delC] variant. The older brother (B-II.1) showed wild type sequence at these positions (Pedigree figure 3). Results are summarized in Table 2. 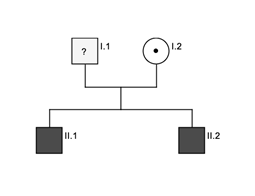 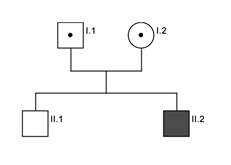 We report three patients with typical symptoms of HPS (oculocutaneous albinism, nystagmus and bleeding tendency). All patients showed pathological platelet delta granule secretion which leads to increased bleeding tendency. Using NGS the molecular genetic defect in these patients could be identified leading to the diagnosis HPS1 in these patients. To our knowledge the splice mutation (c.987+1[G>A]) has not been described yet. According to ACMD guidelines we classified the mutation as pathogenic due to serious consequences. The 1-bp-deletion at position c.1189 was identified in both families who are not related. This variant (rs281865084) has already been described several times [11-17] and has a relatively high minor allele frequency (MAF) in Europeans (ClinVar: MAF 0.000067) [3]. The other 1-bp-deletion (c.355del) found in family B has also been reported before [13, 16]. HPS1 is the most common type of HPS and is found in all ethnic backgrounds. Many patients with HPS1 develop pulmonary fibrosis at middle age [3]. Doubkova et al. and Thompson et al. described two compound heterozygous patients of older age who were compound heterozygous with the c.1189[delC] variant in combination with other variants leading to serious consequences (nonsense, frameshift). The reported patients developed lung fibrosis at the age of 57 and 40 years [11, 18]. Therefore, monitoring for pulmonal fibrosis yearly, beginning in adolescence, is recommended. Lung transplantation may become necessary for patients with HPS1 related pulmonary fibrosis. The impaired platelet function can lead to increased bleeding symptoms during and after surgery especially in case of surgeries in mucocutaneous regions or brain surgery. Therefore, the transfusion of platelet concentrates may become necessary depending on the kind of the surgery. Periodic screening for granulomatous colitis is also recommended since some HPS1 patients can develop this disorder [19, 20]. According to the literature reports it seems that the HPS1 and HPS4 (BLOC-3) defects lead to the most severe prognosis of the HPS types because of the increased risk for pulmonary fibrosis, granulomatous colitis and the increased bleeding complications. Furthermore, these patients can develop wound healing problems as observed in one patient (B-II.2) in this study.

Careful history regarding bleeding symptoms or wound healing problems from patients with albinism should be done before any surgical procedure is initiated. In addition, an early molecular genetic analysis should be performed to provide an adequate follow-up and therapy in case of complications during the further course of the disease. The identification of the molecular genetic defects in HPS will allow further insights in the pathophysiology of this disorder.

We thank Eileen Lerner for excellent technical assistance. The article processing charge was funded by the Baden-Wuerttemberg Ministry of Science, Research and Art and the University of Freiburg in the funding programme Open Access Publishing.

D.B. and F.S. contributed equally to the study design, performed molecular genetic analyses and data interpretation and wrote the manuscript. F.A. and A.S. took care of the patients and collected blood samples. S.F. performed DNA extraction. B.Z. contributed to the study design, supervision of the molecular genetic analyses and manuscript

editing. All authors critically reviewed the manuscript, with approval of the final draft.