Background: Lymphomatosis Gorham-Stout syndrome is a rare disease involving two pathological processes: Infiltration of nonmalignant, aberrant lymphatic vessels into soft and hard tissues and bone lysis. The syndrome is also known as "vanished bone disease", "disappearing bone disease" and "massive osteolysis phenomenon". Its etiology and pathophysiology are unknown. This report will describe a patient suffering from Lymphomatosis – Gorham – Stout Syndrome presenting to the oral medicine department with external dental cervical resorption. The absorption of tooth material was attributed to an aggressive invasion of soft tissue into the dentin, resembling the pathological process responsible for bone disappearance. The rate of cervical external resorption was found to be related to disease progression.

Methods: All the radiographic records of the patient were collected and compared, including three full mouth peri-apical series.

Gorham-Stout Lymphomatosis disease (GSLD) is a spectrum of diseases of unknown etiology and pathophysiology that affects various bones of the body [1] with a predilection for: the long bones of the extremities, spine, pelvis and the jaws [2]. Bone at involved sites is replaced by a proliferation of new lymphatic vessels in Lymphomatosis and angiomatous changes are noted in Gorham-Stout Syndrome (GSS) [3]. Lymphomatosis is sometimes considered an uncommon, more aggressive subtype of GSS, with higher morbidity and mortality rates [4]. From the first description by Jackson [5] in 1838, until now, some 300 patients have been reported in the literature as suffering from GSS. Of these, approximately 40 have been described in the English language literature were diagnosed with Lymphomatosis [6]. Patients with the aggressive form of lymphomatosis may have recurrent pleural effusions, pathological bone fractures, general edema and early death with survival rate of about 50 % [7]. The first signs are found on total body radiographic studies and are radiolucencies with no definitive borders and no signs of malignancy. To the best of our knowledge this is the first article presenting dental involvement.

A 56-year-old woman was referred to the Oral Medicine Clinic for evaluation of generalized external cervical root resorption. The extent of the phenomenon was noted on a full mouth periapical radiograph series (Figure 1). For five years prior to presentation, the patient had recurrent pleural effusions, and cytotoxic drugs, systemic steroids, plasmapheresis and surgical pleurodesis were employed to treat. A biopsy from a lytic lesion on the left tibia confirmed the diagnosis of GSS. Over the following 4 years the patient underwent regular dental checkups and treatments in the Oral Medicine clinic. A biopsy was also taken from a resorbed lesion on the mesial of the lower right first molar. Histological findings revealed connective tissue, with young fibroblasts interspersed by multiple thin-wall vascular spaces and remnants of degraded dentin. The patient was stable for the next three years, and began to deteriorate thereafter. In the fourth year after initial presentation the patient was treated several times for hypo-albuminemia and severe whole body edema. She died that year, nine years following her initial clinical complaint, in the fourth year of oral medicine dental follow-up. Autopsy confirmed the diagnosis of combined GSLD, and histological examination revealed lymphangiomatosis involving serous membranes of the thorax, pericardium and peritoneum, as well as a lytic lesion on her thigh.

Bones affected by Gorham-Stout Lymphomatosis syndrome lose normal structure, as the hard tissue is replaced by fibrotic connective tissue interspersed with newly formed blood or lymphatic vessels [2]. Bones of the extremities, spine, pelvis and face, i.e. all skeletal bones can be affected by this syndrome. Patients may experience pathological fractures of the involved bones. In those with concomitant lymphangiomatosis, pleural effusion, hypoalbuminemia, general edema, and early death may occur [3]. Oral involvement is included the predilection of the disease for the facial bones [4] most commonly the jaws [8]. To the best of our knowledge the patient reported here is the first to exhibit direct dental involvement with external cervical resorption as the presenting sign. Dental resorption has been reported in GSS, and has also been overlooked in several reports. Internal resorption can be seen in radiographs from various reports, including the original report by Jackson [5], Bucher [9] and the multi-dental, apical absorption reported by Paley et al. [10].

In addition to highlighting the resorption of dentin caused by GGS and GSLD, it is important to note that the rate of dentin resorption correlated with disease activity. When the changes in radiographic appearance were minimal, the patient was stable. In contrast, when the radiographic changes were dramatic, the patient experienced a serious decline in her condition (Figure 2, 3). During the patient’s final year of life, the absorption rate accelerated as her condition deteriorated, and the radiographic changes reflected this clinical course. In other words, the changes noted in the 1997-1999, showed that the progression of resorption front was relatively slow, whereas in the 2000 radiographs rapid loss of tooth structure was noted. She suffered from multi-organ edema and anasarca requiring treatment in the emergency room followed by hospitalization in the intensive care unit until her death. During this period the accelerated resorption caused decoronation of several teeth. 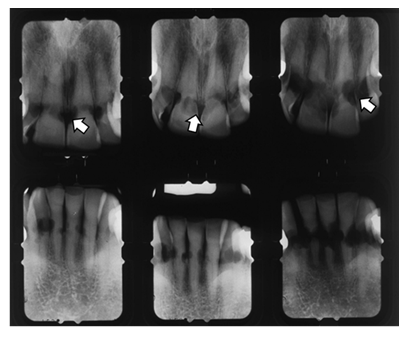 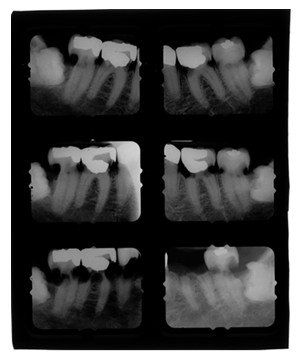 Histological findings from the soft tissue from the dental resorption area were compatible with lymphomatosis but were not consistent with regular inflammatory resorption [11]. There were remnants of dentin and cementum within this soft tissue. The resorption began apical to the cemento enamel junction (CEJ) and then invaded the crown under the enamel. Heithersay described aggressive cervical resorption and graded resorption severity according to the extent of invasion, into four classes: class 1 represents the least invasive and class 4 represents the most, with resorption beyond the coronal third of the root [12]. Heithersays description of resorption is based on the radiographic “moth eaten” appearance, with no clear borders, and involves the crown as well as the root. The resorption presented here is different; we noted symmetrical, well defined areas, resembling a "bitten apple". Since the resorption described here is different from the "invasive cervical resorption" described by Heithersay we will use the term concentric symmetrical cervical resorption to describe our findings. This form of resorption has been previously described, but no etiology was mentioned [13].

These findings imply that the destructive lymphangiomatotic potential may affect all tissue types: skin, soft tissue of internal organs, bone and viable tooth material – dentin and cementum but not enamel. The rate of resorption may serve as a relatively simple aid in the diagnosis and monitoring of GSS.

The authors do not have any disclosures.

This material is the result of work supported in part with resources and the use of facilities at the Atlanta VA Medical Center.