Objectives: Takotsubo syndrome (TS) is clinically characterized as an acute coronary syndrome with rapid development and subsequent resolution of severe, reversible left ventricular dysfunction. We describe a case of TS induced by an acute, severe reduction of oxygen supply resulting in a life threatening carbon monoxide poisoning and leading to coma. A 58 year-old woman was referred to Emergency Room (ER) with cardiogenic shock and hypoxic coma.

Materials and Methods: At ER admission, the Glasgow Coma Scale score was 5 and she needed intensive cardio-pulmonary support and mechanical ventilation. A malfunctioning of the heating system in her bedroom was demonstrated, thus the diagnosis of carbon monoxide poisoning was applied. After a first recovery of consciousness, her responsiveness progressively worsened to a new coma occurrence as by a delayed leukoencephalopathy. At admission in rehabilitation, the patient was diagnosed as vegetative state/unresponsive wakefulness syndrome, according to the Coma Recovery Scale-Revised. After intensive multidisciplinary rehabilitation, the patient evolved from Minimally Conscious State Minus (akinetic mutism) to MCS Plus and finally emerged to Exit-MCS. At 9 months follow-up, the patient recovered a complete autonomy in daily living activities. This is the first case report of TS after toxic carbon monoxide poisoning.

Takotsubo syndrome (TS) is an acute coronary syndrome with rapid development and subsequent resolution of severe, reversible left ventricular dysfunction [1]. The onset of TS is often preceded by emotional (27.7%) or physical (36%) stress [2] and has also been reported as consequence of stimulant drugs abuse [3] and acute poisoning [4]. Among the poisoning agents, up to two-thirds of patients who survive the acute phase of carbon monoxide (CO) toxic inhalation present a delayed leukoencephalopathy, usually in a period ranging from 2 to 40 days. Both leukoencephalopathy and cardiogenic shock may be associated with an overstimulation of the sympathetic nervous system [5]. Some studies-reported that patients with TS had a higher prevalence of neurological or psychiatric disorders than did those with an acute coronary syndrome [2], but the causal relationship between brain damage and heart dysfunction is still to be clarified [6]. Here, we describe the clinical course and outcome of a patient who was diagnosed with TS subsequent to a carbon monoxide poisoning, which caused also a delayed post-hypoxic leukoencephalopathy (DPHL). We selected the present case report with features of both TS and DPHL as hypoxic coma sequelae. The diagnosis of TS was based on the Mayo diagnostic criteria [7]; whereas the diagnosis of DPHL was possible for the presence of the 2 required neurological syndromes: parkinsonism (masked face, rigidity, tremor, dystonic posturing) and akinetic mutism (apathy, visual pursuit and loss of initiation) [8]. A legal representative signed the informed consent.

A 58 year-old woman presented with cardiogenic shock and hypoxic coma. At admission to Emergency Room (ER) the patient needed intensive cardio-pulmonary support and mechanical ventilation for a cardiogenic shock and hypoxic coma, with a Glasgow Coma Scale score of 5. Pre-morbid risk factors consisted of stressing life style and abuse of psychotropic drugs; the diagnosis of carbon monoxide poisoning was applied, due to a malfunctioning of the heating system. Brain CT and MRI were normal at ER entry, coronarography did not show any abnormal findings, whereas left ventricular ejection fraction was 25% at trans-oesophageal echocardiography. Repeated EEG showed diffuse slowing cerebral electrical activity, without any paroxystic discharges. In order to counteract critical haemodynamic condition, an aortic contra-pulsator 1:1 was implanted and the patient was sustained with ECMO V-A, IABP 1:1 and mechanical ventilation until ejection fraction recovered at echocardiography control (after 9 days), according to the diagnosis of TS. Repeated cerebral MRI showed diffuse and confluent hypoxic white matter changes at the level of bilateral fronto-mesial regions, involving also the right temporal lobe as in DPHL. At sedation withdrawal, 10 days after coma onset, the patient recovered an interaction with the environment and presented partially disoriented, confused and sometimes agitated.

Fifteen days after extubation, the patient progressively developed a psychomotor slowing, a diffuse rigidity at upper and lower limbs, like a parkinsonian syndrome, she stopped to communicate, with a worsening of vigilance and consciousness up to a new coma state. At admission to our post-acute rehabilitation hospital, 37 days after- cardiogenic shock, the patient presented with vegetative state (VS)/Unresponsiveness Wakefulness Syndrome (UWS), according to the Coma Recovery Scale-Revised. At this stage, EEG showed a basal activity at 7-8 cycles per second, without any epileptic paroxysms and somatosensory, auditory and flash visual evoked potentials were normal. A diffuse rigido-spasticity was prevalent at the lower limbs with muscular hypertonia at the adductor muscles, reduced range of motion at the left elbow, right knee and bilateral ankles. The low responsiveness, the severe apathy and the complete loss of initiation led the rehabilitation staff to diagnose the patient as in akinetic mutism. Intensive rehabilitation program including physical therapy, with stretching exercises, standing with robot stepping device (ERIGO), gait training, respiratory and, swallowing rehabilitation, speech therapy and cognitive-behavioral training, 5 days per week with a daily duration of at least 3 hours, was performed for 3 months. An educational training of the main caregivers and intensive daily nursing program were also provided.

Forty days after the rehabilitation program, the patient regained the eye-tracking ability, evolving from Minimally Conscious State-Minus to Minimally Conscious State-Plus, with first commands following and sporadic, automatic verbalization and she emerged from minimally conscious state (E-MCS). During rehabilitation hospital stay the patient regained verbal communication, a complete and safe oral feeding ability, improved global motor activity, although a post-hypoxic parkinsonism (hypomimia, parkinsonian posture, diffuse rigidity and bradykinesia) was also diagnosed. Brain MRI has been performed around every 3 months in the post-acute phase and was compatible with the diagnosis of DPHL. Cerebral MR at 9 months from the coma onset showed a reduction of the diffuse alteration of bi-hemispheric white matter fronto-parieto-temporo-occipital regions, with a cortico-subcortical atrophy (Figure 1 and 2). 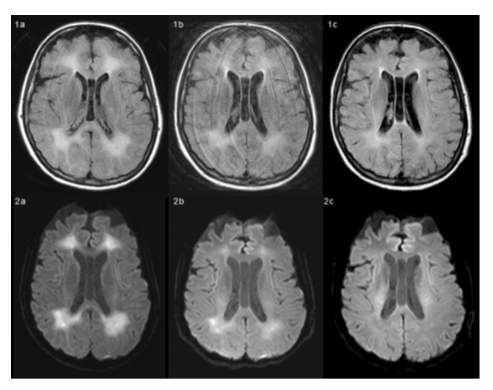 From April to September there is a reduction of the extent and signal intensity of these abnormal hyperintense areas, which can be associated with patient clinical recovery.

Measurements within a region of interest positioned in the abnormal hyperintense areas in ADC maps (not shown) confirm the progressive increase of water apparent diffusion coefficient (ADC=588·10-6 mm2/s in April; 762·10-6 mm2/s in June; 909·10-6 mm2/s in September). The improvement of ADC value is correlated with the decrease, from April to September, of the restriction of water diffusion.

At 9 months follow-up, the patient recovered a complete autonomy in daily living activities. A mild post-hypoxic parkinsonism, characterized by small steps gait, moderate hypomimia and parkinsonian dysarthria still persisted at this time. A neuropsychological evaluation showed a cognitive-behavioral profile characterized by dysexecutive disorders, which impaired problem solving, planning, divided attention and behavioral disinhibition, such as impulsivity and tangential speech; deficit of logical-deductive reasoning for visuo-spatial material, mild explorative asymmetry of the left side, difficulties in short and long-term memory and visuo-spatial working memory. To our knowledge, this is the first case report of TS after toxic carbon monoxide poisoning, whereas a delayed post-hypoxic leukoencephalopathy, as in our case, has been previously reported with a clinical history of carbon monoxide poisoning. The diffuse leukoencephalopathy, demonstrated by cerebral MR in the post-acute phase, may explain the delayed reoccurrence of coma, the prolonged disorder of consciousness and the slow recovery of the neurological and neuropsychological functioning.

Finally, the good recovery of this case, confirmed the benign prognosis of TS due to the reversibility of myocardial and brain dysfunction and of the DPHL, also consequent to the intensive neurorehabilitation treatment. The occurrence of apparently distinct medical disorders (carbon monoxide poisoning, TS-hypoxic coma-DPHL), involving the heart and the brain, seems to confirm the recent theory of the relationship between the two organs, known as “brain-heart connection” [6].

The acquisition and interpretation of imaging data in the manuscript was supported by grant for the Italian Ministry of Heatlh GR-2013-02359341. This work has received funding from the European Union’s Horizon 2020 research and innovation programme under the Marie Sklodowska-Curie grant agreement No 778234.

No conflicts of interests for this manuscript are present.