#Authors contributed equally to this article

Cold agglutinin syndrome (CAS) is an uncommon disease of the blood system, and systemic lupus erythematosus (SLE)-induced cold agglutinin syndrome is also rare. Herein, we report a case of CAS with SLE induced by megaloblastic anemia. The onset of the disease for this patient was severe anemia, but the severity did not match the lack of raw material of the hematopoietic system. Moreover, peripheral blood assay revealed cold agglutinin. The patient was diagnosed with SLE, which was induced by infection and led to CAS. Anti-infection, blood transfusion, and fluid infusion, was administered with warmer S-line to ensure the infusion temperature was maintained at 30°C. Other treatments included an infusion of specially heated red blood cells with appropriate heating and correction of anemia with glucocorticoids, intravenous gamma globulin, cyclosporine, and hydroxychloroquine. Finally, the SLE recovered to the stationary phase. Although megaloblastic anemia is a common disease in the blood system, missed diagnosis is not rare if it is accompanied by other diseases that increase the severity of anemia. Thus, the primary cause of anemia should be explored and use targeted treatment employed.

Megaloblastic anemia belongs to large cell anemia due to folacin acid and/or vitamin B12 deficiency, which might be accompanied by in situ hemolysis in the blood vessel. The clinical manifestations include fatigue and jaundice [1]. The cold agglutinin syndrome (CAS) is a rare disease associated with infections, autoimmune diseases, and lymphoid malignancies [2]. Systemic lupus erythematosus (SLE) is a chronic and relapsing autoimmune disease that is correlated with multiple autoantibodies against nuclear and cytoplasmic antigens. The hematological manifestations of lupus include anemia, leukopenia, and thrombocytopenia. Anemia occurs in 50% of the patients with SLE. Although anemia of chronic disease is the most common cause of SLE-induced anemia, autoimmune hemolytic anemia (AIHA), which has been one of the American College of Rheumatology (ACR )classification criteria of SLE, is not uncommon (10%). AIHA in SLE is usually mediated by warm anti-erythrocyte antibodies of IgG-type [3]. The presence of cold IgM antibodies that cause AIHA is a rare phenomenon in SLE, and has been rarely reported. Department of Hematology, Tongji Hospital, Tongji University School of Medicine, Shanghai, diagnosed and treated a case of megaloblastic anemia with CAS, who was subsequently diagnosed as SLE by a further search for the primary disease.

After admission, she was diagnosed with severe anemia based on Hb 54 g/L, RBC 1.19 × 1012 (3.8–5.1) × 1012/L), and HCT 16.5% (35–45)%. Combined with the condition that the patients had large cell anemia, low vitamin B12, elevated reticulocytes, and mild hemolysis, and that bone marrow and cytogenetic examination did not support MDS, she was diagnosed as megaloblastic anemia and was orally administered folic acid tablets (5 mg every time, three times a day) and vitamin B12 (100 mg every time, once a day, intramuscular injection).

At the time of hospitalization (January 9, 2020), the patient has fever (38.7°C, i.e., 101.66°F), which was initially considered to be caused by infection since the symptoms did not support tumor diseases, such as lymphoma. Combined with clinical manifestations and chest imaging results, she was later diagnosed with community-acquired pneumonia. According to a local epidemiological survey, Streptococcus pneumoniae might be the pathogenic bacteria, and hence, the patient was given piperacillin-tazobactam (Ruiyang Pharmaceuticals, 3.375 g each time, once every 6 h, intravenous drip). After 3 days of anti-infection treatment, her temperature stabilized.

However, the patient experienced high fever again (38.7°C, i.e., 101.66°F) with chills, cyanosis in the extremities, and condensation in the peripheral venous blood on January 14, 2020 when the air temperature dropped sharply. The IgM titer of the agglutinin was 1:512. Peripheral smears showed erythrocyte agglutination, obvious pleochroism, and many nucleated red blood cells. Peripheral blood routine on January 14, 2020: Hb 24 g/L, RBC 0.45 × 1012/L, HCT 6.1%, WBC 4.17x109, N 66%, PLT 250 × 109/L, MCV 135.6 fL, MCH 53.3 pg, MCHC 393.4 g/L, Ret 16.9%; TBiL 36.6 μmol/L, DBiL 8.5 μmol/L, LDH 947 U/L. Direct Coombs test was positive (anti-human globulin C3 was positive and anti-human globulin IgG was negative), erythrocyte antigen CD55 and CD59 were both negative, and blood type was A, RhD (+), CCee type. Furthermore, since the patient was prone to cyanosis every cold winter and according to the diagnostic criteria of cold agglutinin syndrome [4], the clinical manifestations were related to hemolytic anemia, the extremities become bruised by cold, the direct Coombs test was positive, and cold agglutinin titer of the peripheral blood was ≥1:64; after excluding paroxysmal cryoglobulinemia, the patient was diagnosed as CAS.

On January 14, 2020, the patient was given fluid infusion and blood transfusion with warmer S-line (American Virtue Science and Technology Co., Ltd) to maintain the infusion temperature at 30°C. Due to the massive hemolysis, the patient began to have hemoglobinuria, but the cyanosis of the extremities mitigated. In order to improve hemolysis, she was treated with methylprednisolone sodium succinate (Pfizer Manufacturing Belgium NV) at a dosage of 1.5 mg/kg/d and intravenous gamma globulin (Shanghai Institute of Biological Products) at 400 mg/kg/d for 5 days since January 15. On January 17, heated and specially washed red blood cells were infused, which elevated the level of hemoglobin in the patient.

Further medical history and examination revealed that the patient had pleural effusion, pelvic effusion, splenomegaly (131 mm × 40 mm), as assessed by ultrasonography. Hemolytic anemia, increased erythrocyte sedimentation rate, and weak positive antinuclear antibody(ANA)at 1:1000 showed homogeneous type, anti-double-stranded DNA857.7 IU/mL (<100 IU/mL), anti-RNP (+), anticardiolipin antibody (+), and low complement C3 and C4. Since 4/11 revised SLE ACR standards were fulfilled, serositis, hemolysis anemia, positive anti-nuclear antibody, and low complement, and positive anti-dsDNA and anti-phospholipid antibodies, the patient was diagnosed as SLE. On January 19, 2020, she was treated with cyclosporine (Hangzhou Zhongmei Huadong Pharmaceutical Co., Ltd) 6 mg/kg/d orally, and hydroxychloroquine sulfate tablets (Shanghai Shangyao Zhongxi Pharmaceutical Co., Ltd) 0.4 g/d, twice a day. In addition, methylprednisolone sodium succinate was continued at a gradually reduced dosage and was changed to oral methylprednisolone tablets (Pfizer Italia Srl) by 40 mg/d on January 28. As a response to these treatments, hemolysis disappeared, anemia was significantly improved, body temperature stabilized, and relevant laboratory indicators improved. Thus, the patient was arranged to be followed up in the outpatient clinic and was subjected to blood routine test once a week. Furthermore, the dose of methylprednisolone tablets was gradually decreased to 20 mg/d on February 6, according to her condition and then reduced by 4 mg/d every 1 week until the maintenance dosage was achieved at 8 mg/d, which was continued for 3–6 months from March 1, 2020.

After discharge, the patient continued to be followed up. The routine blood examination on April 2, 2020 showed hemoglobin 159 g/L, RBC 5.01 × 109/L, HCT 6.1%, WBC 8.56 × 109, Ret 1.2%, and MCV, MCH, and MCHC were normal. Biochemical tests indicated that total bilirubin, indirect bilirubin, folic acid, and vitamin B12 were also normal. Anti-double-stranded DNA was quantified as 146.1 IU/mL (<100 IU/mL), but the level of complement C3 and C4 was low. Thus, we recommended Mebthera to the patient, which was declined for personal reasons. Then, she was asked to keep warm and continue treatment with methylprednisolone tablets 8 mg/d, cyclosporine 3 mg/kg/d, and hydroxychloroquine sulfate tablets 0.2 g/d until June 5, 2020 when the hemoglobin rose to 146 g/L, SLE was at the rest phrase, and the quantitative amount of anti-double-stranded DNA decreased to 188.2 u/mL (<100 IU/mL), while the complement C3 and C4 were yet at a low level. The drugs and changes in the patient’s clinical indicators are shown in Table 1. 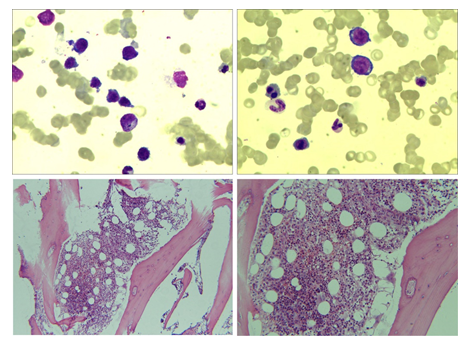 Currently, only a few studies have reported that secondary CAS is caused by SLE. Herein, we described a case of CAS with SLE induced by megaloblastic anemia that could provide some clinical experience. Secondary CAS is relatively rare. Thus, the literature review revealed that mycoplasma pneumonia [5], Epstein-Barr virus infection [6], infection by coronavirus disease 2019 (COVID-19) [7], and lymphoproliferative diseases [8] could cause secondary CAS. Other examinations did not show any evidence of mycoplasma and common viruses; mycoplasma and viral infection, known to be secondary to cold agglutinin syndrome, could be excluded. The diagnosis of the tumor was also not considered. Strikingly, only little literature is available about secondary CAS caused by SLE and cold IgM antibody of AIHA in SLE. Nonetheless, some institutions have reported SLE-induced secondary CAS [9,10]. With careful consideration, our patient might suffer active SLE due to pulmonary infection and SLE-induced secondary CAS. In addition, the treatment of CAS and SLE was effective, which was encouraging. After several months of therapy, the patient's anemia was corrected, and SLE was controlled in the stationary phase; however, there are is positive quantitative anti-dsDNA and low complement C3 and C4 content. Is there any further treatment? The literature review revealed that immunosuppressants such as rituximab, cyclophosphamide, and fludarabine [11], as well as complement therapy [12] have also achieved satisfactory results in the treatment of CAS. Thus, this patient can avail these therapies for improved efficacy.

In conclusion, Anemia is a common disease in the blood system, which can easily miss diagnosis if accompanied by multiple disorders; thus, careful evaluation is required. This case reminds us that when the treatment effect of anemia is not satisfactory, or a new clinical manifestation appears, a detailed and careful assessment should be carried out to exclude other complex causes of anemia. The top choice for the treatment of CAS is hormonal therapy. When the hormone is not effective, immunosuppressive agents and complement therapy can be considered.

This study was funded by the Youth Research Project of Shanghai Municipal Commission of Health and Family Planning under Grant [20174Y0110], and Program of Outstanding Young Scientists of Tongji Hospital Affiliated to Tongji University under Grant [No. HBRC1908], and Shanghai Sailing Program (No. 19YF1444300).

This work has been carried out in accordance with the Declaration of Helsinki (2000) of the World Medical Associatio. The patient was willing to share this case and has signed informed consent.