Robertsonian translocations are connected with a number of cancers, where 90% of cases were reported as constitutional in origin and approximately 3% as acquired [3, 5-11]. Constitutional translocations, specifically der(13;14), may predispose certain individuals to T- or B- cell malignancies, depending on the location of the break sites on chromosome 14 [12, 13]. If the breakpoint occurs at the T-cell a-receptor locus on chromosome 14, then the affected individual may be predisposed to T-cell malignancy. If the break occurs in the short arm of chromosome 14, it does not affect the T-cell a-receptor; however, the individual is at risk to develop a lymphocytic malignancy, such as lymphoma [13, 14]. Furthermore, a tandem translocation between chromosomes 13 and 14, with the breakpoint at 14q, may lead to B-cell malignancy [12]. Previous reports show that pre-malignant and malignant hematological disorders have been reported in individuals with constitutional rearrangements involving chromosomes 13 and 14 [15] and der(15;22) [16, 17].

The 16-MT cell line was generated from primary keratinocytes, and stable transfection was confirmed through dot blot analysis. The 16-MT cell line was grown in complete keratinocyte growth media (KGM CC-4131), (Clonetics, San Diego, CA) and in complete Dulbecco’s modified Eagle’s medium, containing 10% FCS (DMEM) (3:1). The cell solution was then incubated at 37ºC in a 5% CO2 incubator. The standard protocol for tissue culture growth of 16-MT cells is described in Molecular cytogenetic characterization of human papillomavirus16-transformed foreskin keratinocyte cell line 16-MT [22]. Subculturing of the 16-MT cell was halted at passage 16 for study. Slides were aged for 3 days to prepare them for spectral karyotyping.

Array-CGH analysis was performed to further analyze the 16-MT cell line, as previously described [23, 24]. The array consisted of at least 2,464 genomic clones printed in triplicate with an average resolution of 1.4 Mb across the genome. The data were analyzed using the UCSF SPOT computer software [25]. A second computer program, SPROC, was used to calculate the average ratios of the triplicate spots for each clone. 16-MT cell DNA and normal reference DNA from whole blood were labeled by random priming with Cy3- or Cy5-labeled nucleotides and hybridized for 2 days to the array. Sixteen-bit, 1024-pixel images, through 4’,6-diamidino-2-phenylindole (DAPI) Cy3 and Cy5 staining, were collected using a custom CCD camera system [26]. The UCSF SPOT computer software was used [25] to automatically segment the array spots and calculate the log2 ratios of the total Cy3 and Cy5 intensities for each spot after background subtraction. SPROC was used again to calculate the average ratios of the triplicate spots, standard deviations of the triplicates, and plotting positions for each clone on the array for the July 2003 freeze of the human genome sequence draft (http://genome.ucsf.edu). SPROC also implements a filtering procedure to reject data based on a number of criteria, including low reference-to-DAPI signal intensity and low correlation of the Cy3 and Cy5 intensities with a spot. The data files were edited to remove ratios of clones, for which only one of the triplicates remained after SPROC analysis and the standard deviation of the log2 ratios of the triplicates was O 0.2 [24].

In Figure 1, SKY analysis confirmed the presence of the der(13;14) Robertsonian translocation and the isochromosome-Robertsonian translocation i [13] rearrangement. Several other numerical and structural aberrations were noted in the 16-MT cells involving duplications and deletions of chromosomal material [22]. Additional painting with chromosome 13- and 14-specific probes was performed to accurately observe the frequency of the Robertsonian aberrations, which are depicted by the arrow in figure 1A. Figures 1B and 1C present DAPI and classified images, respectively. Figure 1D shows dicentric chromosomes involving der(13;14). Figure 1E –H, focusing on clone number 2, depicts specific probes 13 and 14, that indicate i (13) and der(13;14), respectively. Figure 1F is a DAPI image, and figure 1G and 1H demonstrate SKY analysis of Robertsonian translocations.

The comprehensive summary for cervical cancer cells showed hypotriploid for HeLa and SiHa cells, and Hypertriploid for CaSki cells, as all outlined in Table 2. 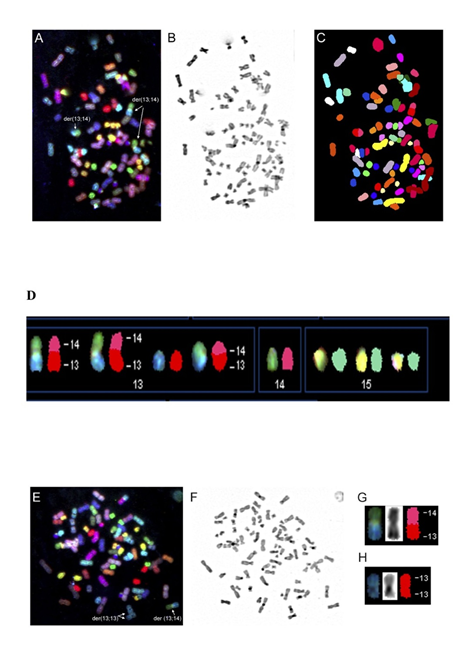 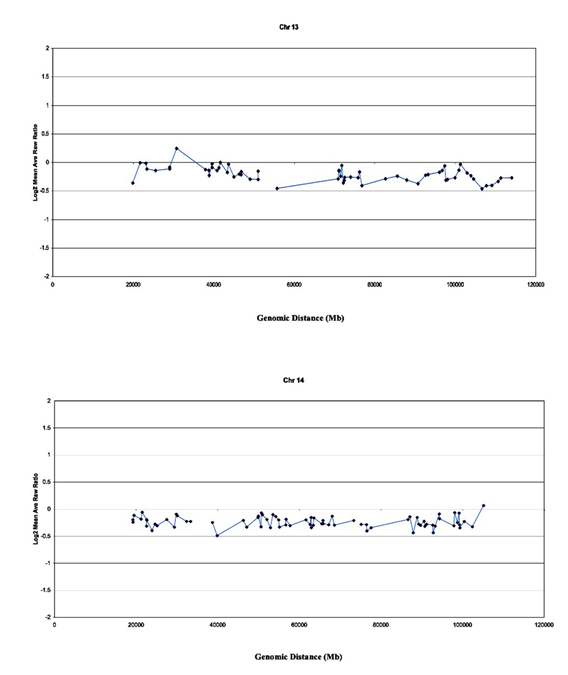 Figure 2: Array-CGH image-profile of the 16-MT keratinocyte cell line. Array-CGH analysis was used to detect and map chromosome gains and losses in the 16-MT cells by hybridizing target of genomic DNA from a test and a reference sample to sequences immobilized on prepared slides. These probes are genomic DNA sequences (i.e., artificial chromosome, or BAC, that are mapped on the genome). The array CGH data show specific chromosomes of interest that indicate Robertsonian derivatives, der(13;14) and i(13).

This study was conducted to examine the molecular and genetic mechanisms by which high-risk HPV16 E6/E7 genes contribute to Robertsonian translocations, genomic instability, and, eventually, cancer. HPV-associated genomic instability is a property that contributes to cancer and is associated with the malignant transformation of human epithelial cells in vitro through the deregulation of HPV oncoproteins [22]. We utilized 16-MT cells as a research model to study acquired Robertsonian translocations. We show, through SKY, that der(13;14) Robertsonian translocations were in 100% of metaphases scored. The derivative chromosome breakpoints, identified by SKY, appeared to have broken in the centromeric region, with the two chromosome pieces (q arms) fusing together after. This occurrence is linked with decondensed pericentromeric heterochromatin, which allows breakage and recombination at the same site [2].

In addition to Robertsonian translocation der(13;14), the rare homologous acrocentric rearrangement i(13) is of particular interest. The homologous acrocentric rearrangement of the q-arms of chromosome 13 resulted in one chromosome 13; therefore, there are still two copies of chromosome 13, one rearranged with two q-arms of chromosome 13 and one normal copy. SKY analysis showed der(13;14) translocations in 100% of all metaphases analyzed. Also, i(13) aberrations were in 75% of metaphases scored, indicating that the 16-MT cell line may be a strong model for studying acquired genomic instability damage. Analysis of array-CGH data showed that Robertsonian chromosomes 13 and 14 have distinct regions of focal gain and loss. The array-CGH results revealed cryptic deletions and gains involving chromosomes where localization is cytogenetically compatible with the aberrant regions identified by SKY. The high level of separate chromosome aberrations might also reflect early or late events that could be induced by HPV16 E6/E7 transfection, thus exhibiting focal amplifications and deletions superimposed upon the background of whole chromosome gains.

We found two specific types of Robertsonian translocations in the 16-MT cells: the non-homologous type der(13;14) and the homologous acrocentric type i(13). Additionally, we found other chromosomal gains and losses from the 16-MT composite karyotype associated with E6/E7 transformation and induced genomic instability. The HPV16 E6/E7 oncoproteins may predispose cells to additional genomic instability, such as sister chromatid exchanges, micronuclei, double strand breaks and bridge fusion breakage. These Robertsonian rearrangements may also facilitate progression to metastasis as it causes a number of genetic changes to accumulate. The data presented here are consistent with previous reports describing chromosomal instability in HPV-infected cells. Most importantly, this is the first detailed report on Robertsonian translocations appearing in HPV-transformed cells. The identification of Robertsonian-acquired changes in 16-MT cells, using advanced molecular cytogenetic techniques such as SKY and array-CGH, supports the usefulness of the 16-MT cell line as an in vitro model for studying important steps during HPV16 induced genomic instability in human keratinocytes.

The authors would like to thank Philip Cotter, Jingly Weier and Ha Nam Nguyen at UCSF for their technical contributions to these studies and the UCSF Comprehensive Cancer Center staff members for their technical support on the array-CGH work. Supported by NIH-NCI GRANTS: 3R01CA054053-10S1; U54 CA143931-04S1