Immunochemotherapy adverse events affecting the gastrointestinal tract usually consist of self-limiting nausea/ vomiting or diarrhoea, while bleeding and perforation are rare. A 42-year-old woman treated with bendamustine/ rituximab for splenic marginal zone lymphoma developed a life-threatening protein-losing enteropathy that was a diagnosis conundrum, ranging from drug-induced, immunemediated, neoplastic and infectious forms. Suspecting opportunistic viral infection but with unremarkable immunohistochemistry and peripheral blood tests, the diagnosis of Human Cytomegalovirus enteritis was made only by means of quantitative real-time polymerase chain reaction carried out on mucosal specimens. Steroid discontinuation and a prolonged course of antiviral therapy allowed the patient to overcome the critical phase and to achieve gradual normalisation of stool frequency, body mass index, laboratory tests lasting one year, while disappearance of mucosal viral load resulted soon evident. Human Cytom-egalovirus end-organ disease localised at the gastrointestinal tract is a serious condition whose prompt diagnosis and treatment prevents poor patients prognosis.

Human Cytomegalovirus (HCMV), a member of the Herpesviridae family, usually establishes lifelong latency in target cells and reactivates in the event of reduced host immunity, giving rise to serious systemic or end-organ disease [1]. In the latter condition, diagnosis is challenging because viral DNA is barely detectable in peripheral blood, and the methods applied on tissue samples may miss virus detection. With regard to the gastrointestinal tract, it is widely accepted that immunohistochemistry is the best technique to confirm or rule out HCMV infection [2]. Moreover, the search for circulating class M HCMV-specific antibodies is considered unreliable in immunocompromised patients, who may not mount a proper immunoglobulin response [3]. In this scenario, the possibility of detecting viral DNA on tissue samples of the target organ by quantitative real-time polymerase chain reaction (qPCR) is of meaningful clinical value since it provides an accurate qualitative and quantitative assessment of viral load, thus facilitating appropriate patient management [4]. Here, we describe the case of a patient who underwent upfront immunochemotherapy for non-Hodgkin lymphoma and developed a life-threatening malabsorption syndrome, whose cause was a diagnostic conundrum.

Fresh perendoscopic distal ileum and colonic mucosal biopsies were collected from both macroscopically normal and diseased areas in order to perform immune-histochemistry, in situ hybridisation and quantitative real-time polymerase chain reaction assays. After harvesting, two mucosal specimens from each area were immediately fixed in 10% neutral buffered formalin for traditional immunohistochemistry and in situ hybridisation, while two biopsies were snap-frozen and cryopreserved until use for the measurement of viral DNA load.

HCMV and EBV DNA loads were assessed on both freshly collected whole peripheral blood samples and endoscopic specimens by quantitative real-time polymerase chain reaction as previously reported [5]. Results were expressed in terms of copies/ml of blood and copies/105 cells for mucosal samples, as appropriate. Normalisation of viral DNA load in tissue samples was obtained by the parallel quantitative determination of the β2-microglobulin house-keeping gene. The lower limit of detection is 1 DNA input target DNA copies [5].

A 42-year-old Caucasian woman with splenic marginal zone lymphoma (SMZL) was admitted to the Internal Medicine Unit of A.O.U.I. Policlinico Rossi (Verona, Italy) because of severe dehydration and hypokalaemia due to watery diarrhoea, nausea, abdominal cramps, fever, asthenia, peripheral oedema and weight loss (15% of body weight in two weeks). SMZL had been diagnosed two months earlier during hospitalisation for Herpes Zoster virus infection of the genital area, when she was also complaining of fatigue due to pancytopenia and pain in the upper left abdominal region due to marked splenomegaly. According to the SMZL prognostic index [6] she was considered a high risk SMZL-IIL case and was offered to undergo splenectomy (declined) or immunochemotherapy with rituximab/bendamustine. Ten days after starting this treatment, she developed nausea and diarrhoea, so a course of empirical cephalosporine therapy was initiated in the suspicion of an intercurrent infection. Due to worsening of symptoms, the patient was then admitted to the Internal Medicine Unit with severe hypokalaemia (2.2 mmol/L, normal range: 3.40-4.80) causing electrocardiographic alterations, elevated International Normalised Ratio (3.49, normal range: 0.80-1.17), hypoproteinaemia (30 g/L, normal range: 60.0-83.0), and hypotransferrinaemia (0.6 g/L, normal range: 2.00-3.60), as hallmarks of severe dehydration and malnutrition.

Since proteinuria was ruled out, lymphoma progression was first hypothesised as the cause of the protein-losing enteropathy. However, the abdominal ultrasound scan showed a critical reduction of the splenomegaly (pole-polar axis from 20 to 14 cm) and bone marrow biopsy revealed clearance of the pathological cell clones. In the meanwhile, all the cultures, molecular biology and serology microbiological investigations carried out on both stool and blood samples were negative. Moreover, coeliac serology with search for anti-tissue transglutaminase class A and G antibodies turned out to be negative, although the levels of both A and G immunoglobulin classes were low, whereas the faecal occult blood test was positive and faecal calprotectin was high (993 m/g, normal value <100). From a therapeutic point of view, the patient did not improve despite total parenteral nutrition, albumin and electrolyte supple-mentation, steroid therapy (methylprednisolone 40 mg/day i.v.), as well as administration of immunoglobulins (0.4 g/kg i.v. on five consecutive days).

Following a multidisciplinary evaluation with both a Haematologist and a Gastroenterologist, the differential diagnosis between drug-induced enteropathy, immuno-deficiency enteropathy and opportunistic viral enteritis was proposed. The patient therefore underwent gastroscopy and colonoscopy, both showing  macroscopically normal mucosa with unremarkable histological examination, whereas the magnetic resonance enterography showed ileal loops with thickened walls and parietal contrast enhancement (Figure 1A). A wireless capsule endoscopy was then carried out that revealed large ulcerated areas surrounded by intensely congested and erythematous mucosa at the distal ileum. This finding directed the diagnosis towards viral enteritis since ulcerative lesions are rare in both drug-induced and immunodeficiency enteropathies. A second lower endo-scopy reaching the distal ileum was then performed, with mucosal sampling of the damaged (Figure 1B) and not-damaged areas for both traditional histology and viral load assessment. The immunohistochemistry and in situ hybrid-disation (see Supplementary material) ruled out lymphoma and HCMV or EBV infection (Figure 1C).

EBV-DNA in peripheral blood was also undetectable, whereas HCMV-DNA turned out to be positive (251 IU/mL). This was mirrored by a high HCMV load in the mucosa of the distal ileum (2,328 copies/105 cells) as assessed by qRT-PCR, whilst only a few copies of EBV-DNA were detected  (23 copies/105 cells). The diagnosis of HCMV-enteritis was therefore confirmed and the patient underwent quick tapering of the steroid, while a course of antiviral therapy with ganciclovir (5 mg/kg bid i.v.) was undertaken for an extended period of four weeks considering her profound immunosuppression due to both immunochemotherapy and severe malnutrition. This led to significant improvement of the patient's clinical condition, with normalisation of stool frequency and almost all laboratory test values, together with a gradual increase in body weight without nutritional supplementation. No longer in critical condition, she was discharged with valganciclovir (900 mg p.o. bid) for a further four weeks, followed by half dosage for another month. This led to the disappearance of ileal ulcerative lesions at the control endoscopy (Figure 1D), together with the absence of detectable HCMV DNA on both mucosa and peripheral blood. During the one-year follow-up period, the patient’s clinical parameters and laboratory tests normalised while under immunoglobulin supplementation, without any SMZL relapse. 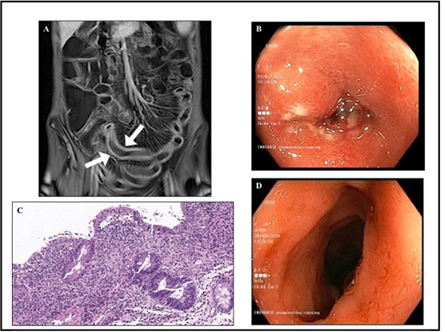 Figure 1: Radiological, endoscopic and histological features. Panel A: Coronal T1-weighted contrast enhanced magnetic resonance enterography showing ileal loops with thickened walls that are avidly enhanced after administration of contrast media. Both arrows indicate mesenteric “comb sign”, usually observed in the presence of an active inflammatory condition. Panel B: The presence of ulcerative lesions surrounded by a fibrinopurulent exudate and embedded in the oedematous and erythematous mucosa of an ileal loop is evident at the endoscopic examination. Panel C: Villous atrophy with focal hyperplastic regenerative changes of the surface epithelium, and active and heavy inflammatory infiltrate of the lamina propria characterised by lymphocytes, plasma cells and granulocytes are evident at histology. Haematoxylin and eosin staining (40×magnification). Panel D: Complete disappearance of the mucosal lesions was evident at the control endoscopy following antiviral therapy.

The growing use of immunochemotherapy, especially for lymphoproliferative disorders, has led to an increase of opportunistic infections, including in non-transplanted haematological patients. However, very little evidence of HCMV infection in patients treated with bendamustine/ rituximab is available [7]. The case presented here of a life-threatening HCMV enteropathy upon administration of this treatment not only underlines the need to consider this condition in differential diagnosis, but also serves to emphasise the importance of using the most appropriate analytical technique since in the gut mucosa immune-histochemistry displays a poor sensitivity in comparison to qPCR [8]. More importantly, qPCR also allows the mucosal viral load to be quantified, which is crucial for correct patient management. Because the life cycle of the virus periodically switches from latency to activation to check the host’s immune system, the finding of positive cells by immunohistochemistry does not give us any information about viral replication. Moreover, the value of 1.000 copies/105 cells has already been identified as the cut-off limit to diagnosis of HCMV enterocolitis in inflammatory bowel disease patients receiving immunosuppressive therapy [8]. In this case we used the same value to make the decision to discontinue steroid therapy and to implement antiviral therapy, which rescued the patient from the life-threatening condition. It is conceivable that reactivation of HCMV infection was dependent on the profound immune-suppression due to rituximab therapy, and that localisation of end-organ disease in the distal ileum was due to the fact that this tract is one of the largest lymphoid organs in the body and particularly susceptible to immunosuppression.

Finally this case highlights the importance of an inter-disciplinary approach and the clinical issue concerning the need to quantitatively evaluate viral load directly on tissue samples when a HCMV end organ disease is suspected, since peripheral blood levels may greatly underestimate those found in the  target organ.

The authors wish to thank the NordEst Agency for their thorough revision of the English text.

This study was supported by the ‘Fondo Universitario Ricerca’ (FURDIPMED_CICCOCIOPPO) to Rachele Ciccocioppo. This source of funding was not in any way involved in the study design, collection, analysis and interpretation of data, writing of the manuscript or in the decision to submit the article for publication.

The patient gave written informed consent for the anonymous publication of her case.