As lung is the most common metastatic site in renal cancer, about 30% of patients with renal cell carcinoma have evident metastases at the initial diagnosis stage [1]. It has been reported that the 5-year survival rate of untreated patients with metastatic renal cell carcinoma (mRCC) is less than 10% [2]. Targeted drugs, such as sunitinib and sorafenib, have improved the treatment of mRCC considerably. In recent years, sequential or combination of multiple targeted drugs has become an emerging topic for the treatment of mRCC. Sunitinib, a multi-targeting tyrosine kinase inhibitor (TKI), has been shown to inhibit tumor neovascularization and regulate tumor cell apoptosis and proliferation, and thus is administered as the first-line treatment for patients with mRCC [3]. In contrast, everolimus is a type of mammalian target of rapamycin (mTOR) inhibitor. Progression-free survival (PFS) can be significantly prolonged compared with placebo (HR = 0.33, P < 0.01) when everolimus is used in the treatment of mRCC patients with disease progression after TKI treatment [4], and thus it has been recommended by the National Comprehensive Cancer Network guidelines for mRCC patients after the failure of TKI treatment. Additionally, axitinib, which is a potential small molecule TKI, has been shown to inhibit tumor growth and disease progression by inhibiting vascular endothelial growth factor (VEGF) mediated endothelial cell proliferation. In a three-phase clinical trial [5], it has been reported that the effect of axitinib in the second-line treatment is better than that of sorafenib on median PFS and objective response rate (ORR), and thus axitinib has also been recommended for the second-line use after disease progression in first-line sunitinib treatment [6]. To date, no standardized treatment has been established to overcome the failure of first-line TKI treatment mainly due to the individual differences in patients. Therefore, in this study, we report the sequential regimen of targeted drugs in a case of advanced renal cancer with multiple metastases, to provide a reference for sequential treatment of mRCC patients.

The patient was a 51-year-old male who was admitted to the facility for treatment. On November 5, 2015, the patient developed diarrhea with fever. Computed tomography (CT) scan performed in the local hospital showed double lung nodule shadow. Left supraclavicular mass and right forearm mass were also found. Eight days later, supraclavicular mass resection was performed in the Xijing hospital (Xi’an, China) and the pathological examination showed renal cell carcinoma. Histological examination identified the case as clear cell carcinoma. Kidney examination was further recommended. On November 21, 2015, further CT examination showed that the mass in the middle and lower poles of the right kidney were about 5.5 cm × 4.5 cm in diameter, the multiple nodules in the left kidney were about 1.5 cm, 1.4 cm, and 1.1 cm in diameter, respectively. The nodule in the right adrenal soft tissue was about 2.2 cm in diameter, and several nodule shadows in the bilateral lower lungs were suspected to undergo metastasis with low-density focus in the right ilium, based on which we could not exclude the possibility of metastasis. However, enlarged lymph nodes or ascites were not found in the abdominal cavity or retroperitoneum (Figure 1). The laboratory examination showed that hemoglobin and blood calcium levels and neutrophil and platelet counts were normal. The Karnofsky performance score was recorded as 90. Therefore, the diagnosis of bilateral renal tumor, right adrenal tumor, lung metastasis, right forearm metastasis or bone metastasis could not be excluded, and thus, the left supraclavicular metastatic mass was resected. The International Metastatic Renal Cell Carcinoma Database Consortium (IMDC) score was 1, which corresponds to intermediate risk group. The renal glomerular filtration rate was measured with technetium-99m-labeled diethylenetriaminepentaacetate, and was recorded as 43.31 mL/min/1.73 m2 on the left and 61.2 mL/min/1.73 m2 on the right.

Thereafter, sunitinib treatment was started on November 23, 2015 (37.5 mg once per day for 2 weeks followed by a week off). Four months later, CT re-examination showed the curative effect of stable disease (SD) (on December 30, 2015, 18.9 % decrease in the sum of the diameters of target lesions was observed, Figure 2). However, the patient developed hypertension and intolerable hand-foot skin reactions, as well as diarrhea, and thus we were forced to stop the sunitinib treatment. On April 5, 2016, we performed cytoreductive nephrectomy (CN), which included robot-assisted partial nephrectomy of bilateral kidney and right adrenal tumor resection. The pathological examination revealed clear cell carcinoma with necrosis of the right kidney (Fuhrman grade 3), multiple clear cell carcinoma of the left kidney (Fuhrman grade 2), and clear cell carcinoma of the right adrenal gland.

Therefore, beginning from April 11, 2016, second-line treatment with everolimus was initiated (10 mg, once per day). On May 31, 2016, the solid mass (1.5 cm × 1 cm × 0.9 cm) in the ulnar muscle layer of the right forearm was surgically removed, and the pathological examination still indicated the presence of mRCC. Moreover, the therapeutic effect of everolimus was not ideal. On September 1, 2016, four months after everolimus treatment, CT re-examination of chest and abdomen showed that the number of multiple small nodules in the two lungs were remarkably increased (Figure 3), which was evaluated as progressive disease. Thus, the treatment with everolimus was terminated.

Thereafter, the third-line treatment with axitinib was started on September 5, 2016 (5 mg, twice per day). On November 1, 2016, whole body bone scan with technetium-99m-labeled methylene diphosphonate did not show any abnormal lesions, excluding the possibility of right ilium metastasis. On December 28, 2016, three months after axitinib treatment, CT re-examination of chest and abdomen showed that bilateral pulmonary nodules were significantly reduced (Figure 4), and thus the patient achieved partial response (PR) state. At the last follow-up on July 14, 2019, the patient was still undergoing the treatment with axitinib, being in a state of SD (Figure 5). 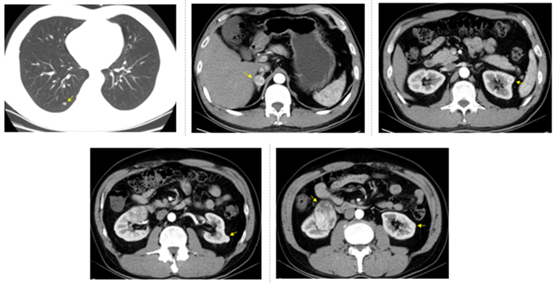 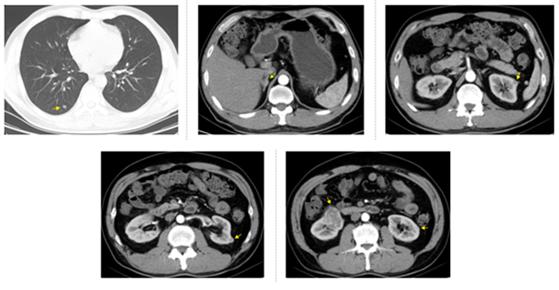 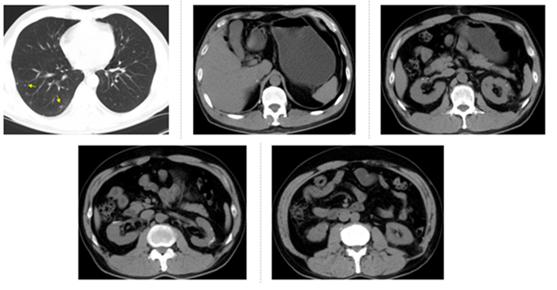 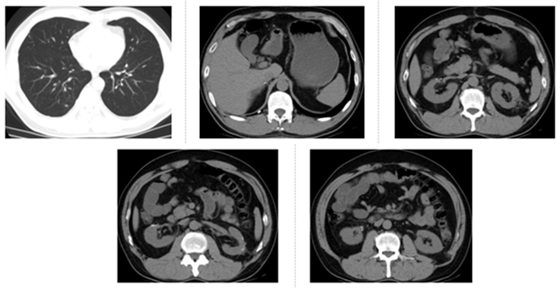 Figure 4: CT re-examination on December 28, 2016, three months after axitinib treatment. The bilateral pulmonary nodules were found to be significantly reduced. 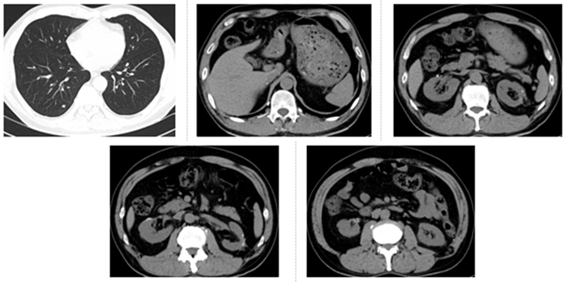 Figure 5: The latest CT re-examination in the hospital on July 14, 2019. CT of lungs and operation area showed a state of stable disease.

For the treatment of mRCC, we have spent more than ten years in establishing targeted therapy [7]. In the era of targeted drugs treatment, tumor reduction surgery has been considered as an important part of the comprehensive treatment of patients with mRCC. Large data studies based on the Surveillance Epidemiology and End Results (SEER) program and IMDC have shown that CN has a positive impact on the overall survival (OS) of patients with mRCC. The study based on SEER database [8] suggests that if the prognostic factors are less adverse, there are more benefits associated with CN, while the study based on IMDC database [9] indicates that patients with IMDC score ≤ 3 (low, medium and partial high risk) have OS benefits from CN. A meta-analyses study [10] confirm that patients with mRCC can benefit from CN, except for the cases with brain metastases, poor IMDC/Memorial Sloan Kettering Cancer Center (MSKCC) risk classification and poor performance status. Another recent meta-analysis study [11] also show that good performance status and low/intermediate IMDC/MSKCC risk classification were predictive of OS benefits from CN. To the best of our knowledge, only one randomized trial [12] report that sunitinib alone is not inferior to CN followed by sunitinib in patients with mRCC. However, 42.9 % of patients in this study are in high risk group of MSKCC, and are not suitable for undergoing CN[13].

In this study, the case was classified in moderate risk group per the IMDC risk classification. We used sunitinib for first-line preoperative neoadjuvant treatment, expecting CN after tumor reduction, so as to preserve the dual renal function of the patient to as much extent as possible. Consistent with our case, in the SURTIME study [14], patients who receive sunitinib treatment for some duration of time without disease progression followed by CN have a longer OS, compared with those who receive CN first. Interestingly, although PR was not achieved as a whole after four months of treatment, we noted that the left renal metastasis was reduced by 32.5 %, the left adrenal metastasis by 22.7 %, and the reduction was higher than that of the right renal primary lesion (9.1 %). This result suggests that the targeted drug has a stronger effect on the reduction of metastatic tumor, which is consistent with the results of previous studies [15,16] and should be attributed to the lower Fuhrman grade of left renal metastasis. Although the dosage of sunitinib was reduced to 37.5 mg once per day, the patient still could not tolerate severe hand-foot skin reactions and diarrhea. Thus, we were forced to stop sunitinib and performed tumor reduction surgery, which included robot-assisted partial nephrectomy of bilateral kidney and right adrenal tumor resection, followed by subsequent forearm metastasis resection. Since this patient needed bilateral surgery and the left renal tumor showed multiple metastases, we decided to stop sunitinib for 10 days before the operation, as described previously in several retrospective studies [17,18]. The operation was successful and the patient's nephrons were preserved as much as possible. Also, there were no operation related complications, which provided us a good signal to proceed with our later treatment. Moreover, the lesions were all corresponding to clear cell carcinoma. Compared with non-clear cell carcinoma, clear cell carcinoma has been shown to exhibit better therapeutic effect in previous studies [19].

We changed to the second-line everolimus treatment after the surgery. In 2009, everolimus has been approved by the Food and Drug Administration for the treatment of patients with mRCC, especially who show failed treatment with sorafenib or sunitinib [20]. One phase 1b study [21] shows that everolimus is well tolerable and can provide clinical benefits for Chinese patients during second-line treatment for mRCC. Another study [22] reveals that everolimus can provide benefits of a longer PFS in patients received only one TKI (5.4 months) than in patients received two TKIs (4.0 months) previously, suggesting that TKI-mTOR inhibitor should have added advantages than TKI-TKI-mTOR in sequential therapy. However, since the patient suffered from increased bilateral pulmonary nodules during the four months of treatment with everolimus, we switched to axitinib for third-line treatment.

Axitinib, a second generation TKI with selective inhibition of VEGF1, VEGF2, and VEGF3, has been approved for second-line treatment of advanced RCC. The AXIS trial was the first study that directly compared the two targeted agents for second-line use in mRCC. Axitinib showed advantages over sorafenib in almost all the categories of patients that were analyzed [23]. In this case, axitinib showed excellent therapeutic effects. A large number of double lung nodules disappeared after the initial three months of treatment, and the remaining shows SD state until now.

It is worth noting that we have now entered into a field of immunotherapy. Sunitinib is no longer the standard treatment used for mRCC, as nivolumab in combination with ipilimumab has shown advantages over sunitinib in OS as well as ORR in patients with intermediate- and poor-risk mRCC, based on IMDC risk classification [24]. Looking back at the treatment process in our case, the patient might have shown better curative effects if we directly decide to administer axitinib in the second-line treatment. Similar strategy has been applied in a recent study [25] that reveals survival benefits of second-line axitinib versus everolimus after sunitinib treatment in mRCC, particularly in patients with better response to first-line sunitinib. Additionally, combination therapy is now becoming a new trend. Considering the highly selectivity to VEGF receptor, and low incidence of hepatic toxic effects, axitinib has been used in combination with anti-programmed cell death protein-1/ligand-1 antibodies, to treat mRCC in several studies [26, 27]. It also results in improved PFS when compared with sunitinib alone, and there is no significant increase in adverse reactions. In this case, to decide when and how the immunotherapy should be combined, more clinical evidences and references are required to address these questions.

This study was supported by the Natural Science Foundation of China (61971425), and China Postdoctoral Science

There is no conflict of interest to disclose among all authors.

Informed consent was obtained from the patient.