KSS is usually caused by large deletions in mitochondrial DNA that span coding regions for subunits of complexes I, IV, and V of the electron transport chain, leading to faulty ATP production, oxidative stress, and eventual cell death. Skeletal and cardiac muscle are primarily affected, while other tissues that include cell types such as lymphocytes and fibroblasts are spared [5]. The uneven distribution among tissue types is explained by mitochondrial heteroplasmy and the fact that a single cell can harbor both mutant and normal mtDNA [6]. Histopathology of affected skeletal muscle demonstrates accumulation of abnormal and enlarged mitochondria that stain red on Gomori trichome stain, termed ‘ragged red fibers’ [2]. Retinal histopathology demonstrates atrophy of the RPE and photoreceptor layers as well as pigment deposition in all layers, correlating with the classic ‘salt and pepper’ retinopathy.

Interestingly, we observed that the most common mtDNA deletion in KSS (‘the common 4977 deletion’) also includes the nucleotide most frequently observed in the pathogenic mutation causing Leber Hereditary Optic Neuropathy (LHON), the 11778 base-pair position, where guanine is changed to adenine [7-9]. LHON is characterized by severe subacute sequential bilateral central vision loss, as well as Ganglion Cell Layer (GCL) loss and optic nerve atrophy on histopathology and Optical Coherence Tomography (OCT) [9]. 10 Given that the 4977 deletion in KSS harbors the common LHON mutation, one would expect that the GCL layer in KSS patients to be atrophic as is those in LHON. Review of the literature shows no correlation between KSS and optic atrophy or inner retinal layer loss, and in fact, few case reports demonstrate preserved GCL and optic nerve axons on post-mortem histology [7,11]. To our knowledge, clinical evaluation of the inner retina by segmentation has not been performed in KSS.

An 11-year-old boy presented with progressive blurry vision, bilateral ptosis, and intermittent horizontal binocular diplopia. Review of systems was positive for headaches, asthenopia, photophobia, marked fatigue that worsened during the day, dysphagia and vomiting. Except for short stature, he was otherwise healthy without cognitive delays, learning disabilities, or hearing loss. Birth history was unremarkable and his parents reported no prenatal infections or toxic exposures. Ocular history was notable for mild hyperopia and astigmatism, without amblyopia or strabismus. He was not taking any medications or vitamins/supplements. Family history was remarkable for Graves’ thyrotoxicosis and ophthalmopathy in his mother, diabetes mellitus in several family members, and wet macular degeneration in a remote paternal relative.

Best corrected visual acuity measured 20/40 in the right eye and 20/50 in the left eye. Pupils were equal, round and reactive to light without afferent pupillary defect. Intraocular pressures were 15 bilaterally. Motility exam showed bilateral ophthalmoplegia with severe limitation in all directions of gaze, particularly in downgaze, which was not overcome with vestibular ocular reflex. External exam was notable for bilateral ptosis without proptosis (Figure 1). Slit lamp exam was unremarkable and dilated exam was notable for clear media, normal appearing optic nerves and vessels, and bilateral patchy areas of hyperpigmentation in the macula and peripheral retina (Figure 2). Macular OCT demonstrated irregular loss of the photoreceptor layer and ellipsoid zone, with relative preservation of the inner retina (Figure 3). The GCL volumes were 0.96 and 0.92mm3 in the right and left eyes, respectively (Figure 4), lying within the standard range of GCL volumes for normal controls [12]. Fundus autofluorescence showed patchy areas of hyper-and hypo-autofluorescence throughout (Figure 5). Goldman visual field showed severe constriction in the right eye and moderate constriction in the left eye (Figure 6). Full field Electroretinogram (ERG) demonstrated isoelectric responses to scotopic stimuli bilaterally, yielding a diagnosis of rod-cone dystrophy (Figure 7). The patient subsequently had genetic testing via a multigene next generation sequencing panel using a buccal sample, which revealed a heteroplasmic (40%) 5409 base-pair mtDNA deletion, m.8686_14094del, classified as pathogenic. He was sent to a mitochondrial disease specialty clinic which included cardiology and endocrinology evaluation.

Figure 1: Montage figure showing the ptosis and the limited movement of both eyes in different gazes.

Figure 2: The right eye and left eye and inferior retina showing that thre is no optic disc atrophy and the salt and pepper appearance to the fundi in both eyes.

Figure 3: OCT of both maculas showing a patchy loss of the photoreceptor layer and normal RNFL. 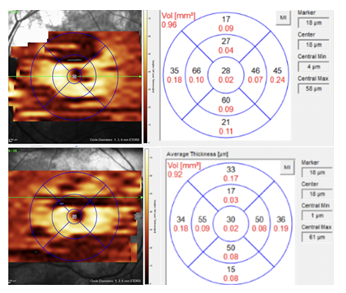 Figure 4: Segmentation of the ganglion cell layer showing that it is in the normal range. 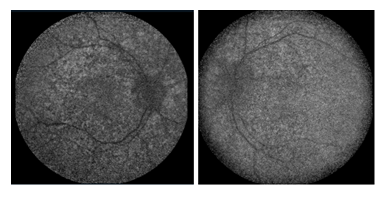 Figure 5: Fundus autofluorescence of the posterior pole in both eyes showing the patchy appearance because of patchy disruption presumably from the heteroplasmy.

Figure 6: Visual fields in both eyes worse in the right eye than the left eye. 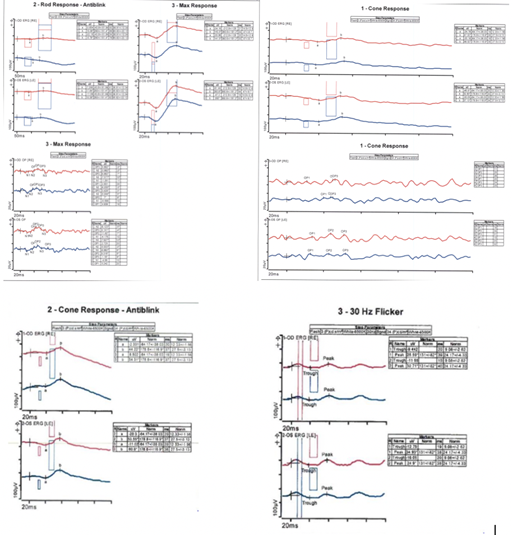 We described the case of an 11-year-old boy with progressive ptosis, ophthalmoplegia, muscle weakness, and pigmentary retinopathy who was found to have a pathogenic, heteroplasmic mitochondrial deletion, consistent with a diagnosis of KSS. The patient’s specific deletion (m.8686-14094del) and the most frequently reported KSS deletion (m.8470-13459del) both encompass the 11778 base-pair, which is mutated in 70-90% of cases of Leber Hereditary Optic Neuropathy (LHON) (Figure 8) [13]. 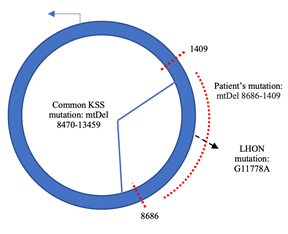 Figure 8: The dotted red lines shows the extent of the deletion in the mitochondrial DNA of this patient. Note that the LHON 11778 site is encompassed by the large deletion.

Underlying genetic mutations in both LHON and KSS’ affect oxidative phosphorylation in highly metabolic tissues by causing dysfunction of complexes involved in the electron transport chain. As previously mentioned, the 5-kilobase deletion in KSS affects complexes I, IV and V of the electron transport chain leading to impaired ATP production [5]. In LHON, the m.11778G>A mutation (guanine to adenine at position 11778) results in loss-of-function of the ND4 protein of NADH dehydrogenase, leading impaired glutamate transport in mitochondria and buildup of reactive oxygen species [10]. Despite their similar underlying defects, LHON and KSS have been shown to affect the retina in differing ways. LHON primarily affects the optic nerve and retinal Ganglion Cell Layers (GCL) [13]. OCT shows Retinal Nerve Fiber Layer (RNFL) thickening and early GCL defects in the acute phase, followed by progressive thinning of the RNFL and GCL layers in the late-acute and chronic phases [14,15]. The retinopathy in KSS results from a primary Retinal Pigment Epithelial (RPE) defect and subsequent photoreceptor loss and pigment deposition. OCT demonstrates loss of outer retinal layers temporal to the fovea and disruption of the ellipsoid zone in a patchy pattern due to heteroplasmy [7,16]. Although the outer retinal findings are well described, to our knowledge, evaluations of the inner retina by OCT segmentation have not been presented in KSS.

We performed OCT of the macula with specific segmentation of the inner retina in our patient with a molecular diagnosis of KSS. Interestingly, despite having a deletion including the 11778 position, our patient did not have any findings consistent with optic atrophy nor marked GCL loss. This finding is further supported by several case studies evaluating histopathologic findings in post-mortem eyes of KSS patients. Evaluation of retinal layers in a 52-year-old male with KSS revealed disruption and atrophy of retinal photoreceptors and outer retina, as well as aberrant pigment distribution in all layers of the retina, with relatively preserved ganglion cell and retinal nerve fiber layer [7]. Optic nerve evaluation in two patients with KSS and another mitochondrial myopathy (MELAS) showed normal histologic appearance of the optic nerves with in-tact bundles of axons in all quadrants. The authors concluded that these patients showed no subclinical evidence of optic neuropathy [11]. In addition, to our knowledge, there are no cases of KSS patients with bilateral optic neuropathy consistent with LHON pathology.

We hypothesize that because the photoreceptor layer is lost in KSS, there is decreased activity in the inner retina and so it is spared from atrophy. In contrast, we speculate that patients with LHON have preserved outer retina and thus the GCL continues to have high metabolic activity. This causes increased stress on the diseased mitochondria resulting in free radical formation and eventual loss of the GCL, contributing primarily to vision loss. One implication of this observation is that we may consider using Pan Retinal Photocoagulation (PRP) in LHON to decrease metabolic activity in the inner retina as is done for Proliferative Diabetic Retinopathy (PDR). In PDR, selective damage from photocoagulation to the outer retina (which houses most of the retinal mitochondria) decreases its oxygen consumption, allowing oxygen to diffuse from the choroidal circulation to the inner retina. This decreases the oxygen demand of the inner retina and thus stops abnormal vessel growth, thereby preserving the GCL and visual potential [17]. Although speculative, a similar phenomenon of selective damage to the outer retina to preserve the GCL could potentially be a treatment to prevent optic neuropathy in LHON.

Other hypotheses for preserved GCL volumes in our patient include a later onset of GCL loss than photoreceptor loss in KSS, which would not yet be evident in our 11-year-old patient. (In LHON, mean onset of symptoms is in the third decade) [11]. Additionally, it is possible that the G11778A mutation creates an abnormally functioning protein whose presence leads to damage of the inner retina, while the complete absence of the protein (in the 5kb deletion) has no such effect. LHON due to the m.11778A>G mutation has been reported to have reduced penetrance (only 50% of males harboring this mutation develop symptomatic optic neuropathy), which also should be considered in the evaluation of this patient population. Lastly, there may be differing levels of heteroplasmy within the retinal layers; it is possible that the 5 kilobase mtDNA deletion of KSS has preference for the mitochondria of the RPE and photoreceptor layers while the G11778A mutation of LHON is more homoplasmic with predilection for the GCL mitochondria.

The main limitation to our observation is that we report a single case study. Further studies should evaluate the inner retina by OCT in additional KSS patients harboring the common 4977 mutation, as well as in patients with other phenotypes due to related mitochondrial deletion syndromes such as CPEO and Pearson Syndrome that may also involve the LHON genes. Most KSS patients have likely undergone OCT imaging with focus on the outer retina; systematic review of inner retinal layers may be performed without further burden to the patient. Assessment of peripheral ganglion cell layers on OCT may also be informative as KSS is thought to affect the peripheral retina first and thus early changes in the GCL may be seen there. Finally, OCT provides only structural assessment rather than function. Further evaluation of retinal layers by pattern ERG is needed to support intact GCL electrophysiology. Although KSS is a rare disease (1.6 per 100,000), these findings may have implications for treatment of a much more common mitochondrial disease.

This work is supported by the J. Arch McNamara, M.D. Memorial Fund of MidAtlantic Retina and Wills Eye Hospital.