Retinoblastoma is leading ocular malignancy in children. Newer modalities of treatment have improved the survival and eye preservation rate. However, very few reported cases document spontaneous regression of tumour in eye without any treatment. The paediatric ophthalmology and ocular oncology unit of our tertiary eye institute had noted three cases between 1983 and 2015. We present clinical features at presentation and progress noted during follow up. Histopathologic confirmation of diagnosis in such cases is not possible. However, clinical diagnosis by expert in the field in these cases is reliable.

Spontaneous regression of malignant tumours has been previously documented for, neuroblastoma and carcinoma metastasis [1, 2]. A few case series of this phenomenon for retinoblastoma have been published in Taiwan and USA [3, 4]. The possible pathophysiology in cases of regressed retinoblastoma includes the sequence of apostosis [5]. Retinoblastoma (Rb) is a common childhood malignancy that occurs in many populations including Arabs [6]. The tertiary centre in Saudi Arabia where the majority of Rb cases in the kingdom are treated [7]. The hospital has an Rb and Tumour registry since 1983. There were 828 cases of Rb registered by the end of 2013 for Saudi Arabia [8]. In the Rb registry, there were 4 children with a confirmed history of spontaneous regression of Rb. To the best of our knowledge, clinical and imaging profile of such cases has not been documented in the literature. We present three spontaneous cases of Rb regression out of 763 Rb registered cases [6].

A 3-years-old male was referred on December 2008 with complaints of dim vision and deviation of left eye. On examination under anaesthesia, an oval elevated retinal tumour was noted. Magnetic Resonance Imaging (MRI) revealed oval shaped lesion of 0.4 x 1.0 cm, temporally located between 12 and 2:30 o’clock with calcification. There was no retinal detachment and the globe was no enlarged and there was no extraocular infiltration. Ophthalmic examination and MRI of right eye were unremarkable (Figure 1). The patient was diagnosed with Rb in the left eye. The patient presented for his last follow up on January 12, 2014, at 9 years old. He had no history of ocular surgery, chemotherapy or radiotherapy. Clinical assessment under sedation revealed 0.5 cm retinal tumour with a retinal hole and cystic changes within the lesion. The diagnosis was stable regression type III.

A female born in 1985 presented to the ocular oncology unit at on February 12, 1989 with a diagnosis of Rb in right eye by another eye institute. On examination under anaesthesia the tumour was 2.4 mm and inactive. Child presented for follow up regularly and she underwent surgery for right eye exotropia in 2002. In 2013, a neuro-ophthalmologist evaluated the patients for complaints of headache. A MRI was advised. There was no space occupying lesion intracranial, intraocular or in the orbits. There was minimal thickening along posterior uvea bilaterally. A macular scar was present in the right eye. The vision in right eye was 20/80. The diagnosis was migraine headache and regressed retinoblastoma in the right eye.

A 2-year-old male presented with retinoblastoma in the left eye. There was esotropia left eye. Anterior segment was normal. Vision could not be taken but child was able to count the figures in left eye and was following direction of projected light from all four directions. The pupil was reacting to light. The right eye was normal on examination. The retinal lesion in the left eye is presented in Figure 2. On his last assessment in 2014, there was clear evidence of regression without any treatment. 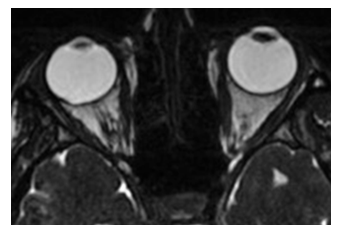 Figure 1: Magnetic resonance tomography of orbits of patient with clinical retinoblastoma without any extension in orbit. 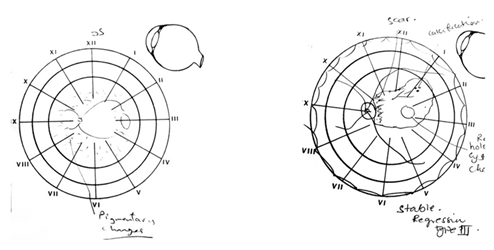 Figure 2: Schematic drawing of retina showing retinoblastoma at first (A) and last visit (B).

Spontaneous regression is not a new phenomenon. However, this is likely the first report of the regression of Rb among Arabs. Previous literature has documented a 5% Rb regression rate in Taiwan [3]. This is much higher than 0.4% found in our study. A study of spontaneous regression in all cancers reported a rate of 1 in 12,000 [2]. Our cases demonstrated spontaneous Rb regression in the first five years of life. However, complete resorption can take as long as 20 years. This observation suggests long term follow up of such patients to minimize late detection of reactivation of Rb in these cases [4]. Specimens for histological and proteomic profile using tumour mass is not possible in Rb cases with spontaneous regression. However, genetic profile collecting samples from other parts of body is recommended to confirm these cases. Animal studies have shown an overexpression of Th17 related gene in canine models with spontaneous tumour regression [9]. Apoptosis of Rb cells has been noted to be a morphological feature of SP Rb regression [10]. Modern tools such as optical coherence tomography would be helpful in reviewing cellular changes taking place in spontaneous Rb cases.

We thank members of the retinoblastoma committee for encouragement and support for this study. Dr Sahar Eul-Khamary, Head of Digital Imaging Department reviewed images of the participants. The staff of record section provided timely assistance in obtaining the case files.

SM: planning and finalisation of manuscript