Inhibition of Radioactive Depletion of Hemocytes and Antitumor Effects of Flavonoid

Natural products are able to inhibit radiation effects and exert an antitumor effect with fewer adverse reactions; however, their antitumor effects are less than those of widely-used synthetic drugs. Flavonoid is a natural material that has attracting attention, and we extracted this material with alcohol and investigated the effect of continuous flavonoid administration on radioactivity-induced reduction of hemocytes, in addition to the antioxidant and antitum or effects of flavonoid. Following a 1-week adjustment period, flavonoid was administered intraperitoneally to male ICR mice at a dose of 100 mg/kg every other day for 2 weeks.

Following administration, 2 Gy whole-body irradiation was performed and the counts of leukocytes, lymphocytes, and granulocytes and monocytes in the peripheral blood were determined 1, 3, 7, 15 and 30 days after irradiation. These cells were considered since they are closely associated with immunity to radioactivity. In a second experiment, flavonoid was similarly administered to the mice for 2 weeks after a 1-week adjustment period, and 2 Gy whole-body irradiation was performed. The antioxidant effects in hemocytes were then investigated using 2,2'-azobis (2-amidinopropane) dihydrochloride (AAPH), a radical generator.

In a third experiment, 1×106 Sarcoma-180 cells were inoculated into the right thigh of mice, which were divided into four groups: control, flavonoid-treated, 6 Gy irradiated and Flavonoid-treated + 6 Gy irradiated groups, and changes in tumor size were measured for 20 days. Statistical analysis was conducted using ANOVA for multiple groups. In the three experiments, administration of Flavonoid inhibited the reduction of hemocytes caused by whole-body irradiation, showed antioxidant effects against radioactivity, and inhibited tumor growth, respectively. In conclusion, our data suggest that the antioxidant effect of Flavonoid inhibits hemocyte reduction caused by whole-body irradiation and enhances immunological inhibition of tumor growth.

Flavonoid is a natural material collected by bees from the skin, sap, and bud and so on of the tree. It is known that flavonoid has contained various elements, polyphenoles, flavonoids, phenolic acid and their esters, caffeic acid and their esters and phenolic aldehydes and ketones, respectively [1]. It has been used in folk medicine. In present studies, flavonoid has been shown various pharmacological effects including anti-inflammatory [2-5], antimicrobial [6], antioxidant [7, 8], immunostimulatory, antihyperglycemic and antitumor activities [9]. Some the influences on the radiation that uses the flavonoid [10] and the researches of the antitumor effect are performed. This time, we report that effects of blood cell and antioxidant for whole-body irradiation of mice and influence of Sarcoma-180 antitumor in vivo using flavonoid.

Lumps of crude flavonoid were powdered and mixed with 2l of alcohol for 2 hours. Then the suspended material was separated by centrifugation at 4.5 ´ 104 rpm for 10 min. The resulting pellet was extracted with 2l of alcohol and the material again centrifuged. The combined supernatants were passed through filter paper and freeze-dried to produce flavonoid. Favonoid was suspended in saline and administered to mice at a does of 100 mg/kg every other day. Flavonoid administration continued until the end of the experiments.

Five-week-old mail ICR mice with a mean weight of 18-20 g were purchased from Japan SLC Inc. and kept under standard conditions (room temperature 22 ± 3ºC, humidity 60%) with free access to food (CA-1, Japan Clare, Inc.) and drinking alcohol. The mice were acclimated to the breeding and experimental environment for 1 week prior to the experiments (Figure 1). 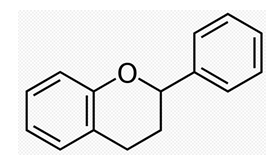 X-ray irradiation was administered to each mouse using an X-ray generator designed for animal use (Phillips, Inc.). The table was rotated at a constant speed so that these mice were irradiated evenly. The conditions for irradiation were: source voltage, 200 kV; rate of radiation, 0.35 Gy/min; and supplemental filter, 0.1 mm Cu + 1 mm Al.

After acclimation, mice were divided in 4 groups same as the experiment of blood cell count. FLAVONOID was injected to mice for 2 weeks. After 2 Gy whole-body irradiation, whole blood was collected from mouse hearts by puncture with 23-G needle under anesthesia, mixed with heparin, and either centrifuged (10 min at 1200 rpm 2ºC) to separate blood plasma. Blood plasma was suspended 1:100 in PBS to 200 μl then added 200 μl of AAPH (2,2’-azobis[2-amidinopropane]). After warm 37ºC for 120 seconds, added 200 μl of luminal, chemiluminescence intensity was recorded using a luminescence reader (ALOKA BLR-201).

2.6 Measurement of flavonoid injection or combined with X-irradiation on tumor growth

After acclimation, mice were divided in 4 groups same as the experiment of blood cell count. Flavonoid was injected to mice for 2 weeks then 1 ´ 106 Sarcoma-180 cells were injected into the right femoral region. When tumor grew to 10 mm in diameter, irradiation groups were treated with 3 times of 2 Gy irradiation every other day and all groups of tumor diameters were measured with a caliper for 20 days. Tumor volumes were calculated using the formula: V=ab2/2, where “a” was the shortest tumor diameter and “b” was the longest tumor diameter measured.

Experimental values are given as mean ± standard error of the mean (SE). All experiments of statistical analysis were performed using a parametric ANOVA test among the groups to determine significant difference.

The granulocytes also showed a tendency to increase with flavonoid administration (Figure 5). The number of granulocytes in the irradiated group reached a minimum 3 days after irradiation and recovered gradually thereafter; however, that of the flavonoid-treated + irradiated group reached a minimum the day after irradiation and recovered slightly earlier. No statistically significant difference in the number of granulocytes was found between the groups at any time point (Figure 2-5).

However, no statistically significant differences were found among the groups at all determination points. The tumor growth rates (mean ± SE) 20 days after tumor implantation were 16.2 ± 3.4, 11.2 ± 2.6, 8.5 ± 1.6 and 6.7 ± 0.8 for the control, flavonoid-treated, irradiated and flavonoid-treated + Gy irradiated groups, respectively (Figure 7). 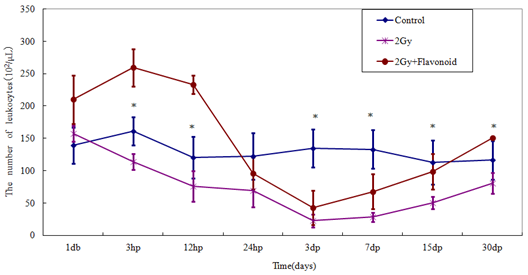 Figure 2: The change in the number of cells in the blood taken from the tail vein of whole body irradiated mice. Each lineargram represents the mean value ± SE in leukocytes from 10 mice (M). Results represent means ± S.E. 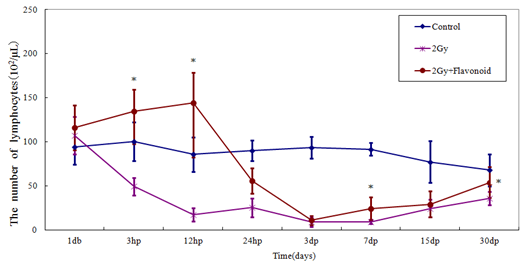 Figure 3: The change in the number of cells in the blood taken from the tail vein of whole body irradiated mice. Each lineargram represents the mean value ± SE in lympocytes from 10 mice (M). Results represent means ± S.E. 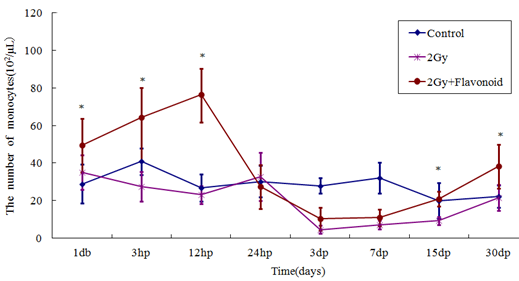 Figure 4: The change in the number of cells in the blood taken from the tail vein of whole body irradiated mice. Each lineargram represents the mean value ± SE in monocytes from 10 mice (M). Results represent means ± S.E. *Statistically significant (P<0.05) from the 2Gy group. 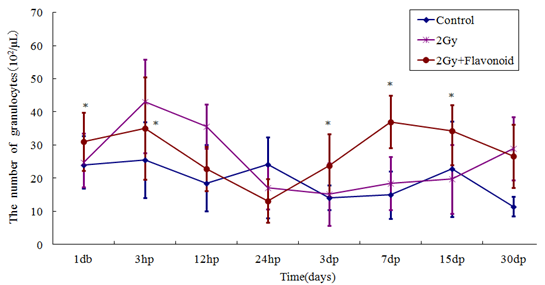 Figure 5: The change in the number of cells in the blood taken from the tail vein of whole body irradiated mice. Each lineargram represents the mean value ± SE in granulocytes from 10 mice (M). Results represent means ± S.E. *Statistically significant (P<0.05) 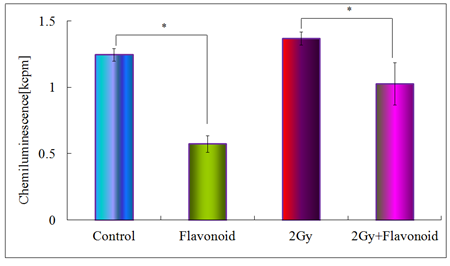 Figure 6: Antioxidant activity of flavonoid in the blood plasma taken from the heart of mice. Each bar represents the mean value ±SE from 10 mice (M). Significantly different *p<0.05 Control vs flavonoid, 2Gy vs flavonoid +2Gy, respectively. 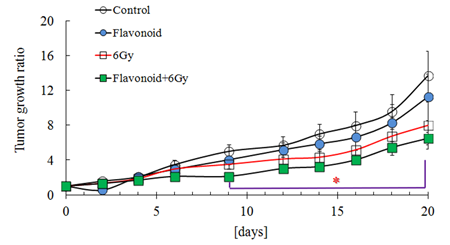 Figure 7: Effect of flavonoid on the tumor growth in mice inoculated with Sarcoma-180 cells. Groups of ten mice each were subjected to each treatment. Results represent means ± S.D for 10 mice (M).

Whole-body irradiation is known to cause free radical-induced DNA damage and carcinogenesis, and to compromise the immune system due to its effect on leukocytes [11]. To evaluate the effects of flavonoid on irradiation-induced damage, we investigated changes of hemocytes in the peripheral blood, inhibition of oxidation induced by AAPH, a radical generator, and changes in tumor growth of Sarcoma-180 following flavonoid administration. The effects of irradiation and flavonoid on hemocytes (i.e., lymphocytes, monocytes, granulocytes and leukocytes), which are directly associated with the immune system, is shown with time in Figure 2. Administration of flavonoid prior to irradiation increased the hemocyte count significantly. Hemocytes were markedly reduced by irradiation, but flavonoid administration inhibited this reduction and increased the minimum level. Nada et al. have reported that single intraperitoneal administration of flavonoid at a dose of 50 mg/kg significantly increases leukocytes 3 and 7 days after administration, with a concomitant increase in the weight of the spleen [1], and also reported that leukocyte count and spleen weight increased after repeated oral administration of flavonoid at a dose of 50 mg/kg 5, 10 and 15 days before determination [12]. Kimoto et al. showed both in vivo and in vitro inhibitory effects of artepillin C, which is a component of flavonoid, on the growth of various tumors, and reported that cytotoxicity and adjuvanticity increased in lymphocytes [13].

Hydroxyl radical (×OH) and superoxide radical (O2-) are free radicals that are induced by irradiation. The OH radical is known to oxidize lipids to peroxy radicals (ROO×) and to increase lipid peroxide levels [11]. AAPH, a soluble azo compound, is a free radical initiator that generates radicals through simultaneous thermolysis, which results in oxygen inclusion into peroxy radicals [14]. These radicals can then abstract a hydrogen atom from various molecules, combining with the hydrogen to stabilize themselves while inducing a radical chain reaction in the substances undergoing hydrogen loss. In this study, under conditions with and without irradiation, flavonoid inhibited AAPH-induced peroxy radical formation (Figure 6). Nagai et al. have reported the antioxidant and radical scavenging effects of flavonoid on DPPH and hydroxyl radicals [15], and Cos et al. showed similar effects for a caffeic acid ester extracted from flavonoid [16]. El-Ghazaly et al. have reported that flavonoid suppresses inflammation caused by whole-body irradiation [10], and also showed that superoxide dismutase (SOD) activity is increased in hemocytes following flavonoid treatment of both irradiated and non-irradiated rats. SOD inhibits oxygen toxicity by catalytic scavenging of free radicals that would otherwise cause tissue damage [17]. Hence, flavonoid is a natural antioxidant that enhances SOD activity and inhibits production of oxides from lipid oxides [18, 19], and Kobayashi et al. showed the O2-scavenging effect of flavonoid at super critical state (40ºC, 350 atm pressure), and suggested that flavonoid contains vitamin C [20]. Collectively, these results suggest that flavonoid has both an antioxidant effect and a free-radical scavenging effect.

Figure 6 shows the tendency for inhibition growth of the Sarcoma 180 tumor by combined administration of flavonoid and irradiation. Similar antitumor effects have been reported previously; hence, Gu et al. showed an effect of flavonoid on tumorigenesis of colorectal cancer, and showed that flavonoid regulates DNA damage, using a Comet assay [21]. It has also been reported that flavonoid and its components, including flavonoids, aromatic carboxylic acids and esters, prevent oncogenesis [22]. Matsuno et al. showed that PRF-1 extracted from flavonoid has toxicity for human hepatocellular carcinoma [23], and Kimoto et al. showed that flavonoid suppresses FeNTA-induced renal adenocarcinoma in CD-1 and ddY mice [24]. Clinical treatment methods using flavonoid have yet to be clearly established, but many pathological studies have shown biological effects of flavonoid [25]. It has been reported that leukocytes and CD8+ and CD4+ cells are significantly increased in Flavonoid-treated mice [26], and flavonoid and its components have been shown to have mobility and bactericidal properties in vivo and in vitro, while enhancing tumorigenic activity and producing factors activating IL-1, TNF and lymphocytes in mammals [27]. It is well known that irradiation of tumors suppresses tumor growth: irradiation has a direct effect on tumor DNA, thereby suppressing cell growth and inducing apoptosis [28], and can delay tumor growth by an oxygenic effect (reoxygenation) on tumor blood vessels [29]. The combined antitumor effects of flavonoid and irradiation-inhibited tumor growth appear to be stronger than the effects of each treatment alone.

In conclusion, prior administration of flavonoid enhances the immune systems and suppresses irradiation-induced damage to hemocytes in the peripheral blood. Flavonoid also shows an antioxidant effect in reducing irradiation-induced free-radical damage, and can inhibit the growth of sarcoma cells, with increased inhibition occurring in combination with irradiation.