Case: The patient is a 25-year-old female with trochlear dysplasia, native left knee lateral patellar instability and iatrogenic medial patellar instability from treatment prior to presentation. She had grade 3 cartilage loss on the majority of her patellar articular surface. She underwent concurrent medial and lateral patellofemoral ligament reconstruction, Fulkerson osteotomy, and osteochondral allografting of her entire patellar articular surface. After reconstruction she had no further instances of instability.

Conclusion: Patients with trochlear dysplasia and patellar instability require correction of their abnormal osseous anatomy in addition to soft tissue reconstruction. Concurrent MPFL and LPFL reconstruction with Fulkerson osteotomy and osteochondral allografting of the patella can successfully treat cases of multidirectional patellar instability with a large associated patellar osteochondral defect.

Patellar instability most commonly manifests as a lateral dislocation of the patella from the trochlear groove [1, 2]. It occurs most frequently in the adolescent female population with an incidence of 29 per 100,000 [3]. Treatment for first time instability is traditionally non-operative with reduction and a brief period of immobilization [4]. However even with appropriate conservative management, recurrent patellar instability occurs frequently. 15-44% of patients treated conservatively following first time instability and >50% of patients with a second dislocation will have continued instability [1].

In patients with multiple episodes of instability there is a high incidence of MPFL and medial retinaculum compromise [5]. In these patients surgical management involves reconstruction of these damaged medial structures [6]. However, it is important to recognize that patellar instability is a multifactorial problem. Trochlear dysplasia, patella alta, and lateralization of the tibial tubercle relative to the trochlear groove in addition to MPFL incompetence all predispose a patient to patellar instability [2, 6].

As such, successful surgical treatment must address all factors contributing to the patient’s instability. We present a case of chronic lateral patellar instability that was treated prior to presentation with a lateral soft tissue release and medial ligament reconstruction without addressing the patients contributing abnormal osseous anatomy.

This led to failed reconstruction, persistent lateral instability, iatrogenic medial instability, and resulting severe osteochondral defect of the patella that required osteochondral allografting of the entire patella articular surface. The patient was successfully treated once all factors contributing to her instability were corrected.

The patient is a 25-year-old female with Ehlers Danlos Syndrome and a history of recurrent left knee lateral patellar instability starting at age 7. She underwent lateral release with medial plication at age 16, 9 years prior to presentation. Following her index procedure, she experienced persistent lateral instability as well as new iatrogenic medial instability. Two years after her index procedure at age 18 she underwent medial patellofemoral ligament reconstruction however she continued to experience both persistent medial and lateral instability.

At the time of presentation, she reported daily instability. Her instability was both medial and lateral and occurred with activities requiring full knee extension or walking on uneven ground. Her physical examination was notable for a 7 degree flexion contracture and apprehension with lateral and medial patellar translation. Imaging obtained at time of presentation to our clinic showed a shallow trochlear groove, patella alta with Insall-Salvati ratio of 1.5, and tibial tuberosity – trochlear groove distance of 17 mm (Figures 1a and 1b). MRI at the time of presentation also showed a significant cartilage lesion on the under surface of her patella. The patient underwent exam under anesthesia with arthroscopic evaluation of her patellar tracking and articular cartilage.

Her patella could be easily dislocated laterally and medially at full extension through 70 degrees of knee flexion. Due to the patient’s significant patella alta the patella did not engage the trochlear groove until the knee was flexed past 60 degrees of flexion. The patella demonstrated an inverted J-sign and could be everted to a vertical position. There was palpable insufficiency of the lateral retinaculum and the medial patellofemoral ligament. Arthroscopic evaluation of the under surface of the patella demonstrated grade 3 cartilage loss to two thirds of the articular surface involving both the medial and lateral facets with only a small amount of intact cartilage proximally (Figure 2a). This was consistent with her findings of chronic medial and lateral instability. The trochlea was somewhat hypoplastic in nature but not significant and was found to have grade 1 cartilage softening. Overall the cartilage on her medial and lateral condyles was intact.

Given these findings and her overall clinical picture the patient subsequently underwent medial and lateral patellofemoral reconstruction, Fulkerson osteotomy, and patellar osteochondral allograft with a size matched donor. For this procedure a midline incision was performed with a lateral arthrotomy to allow for lateral capsule lengthening. The lateral retinaculum was essentially non-existent due to her previous overly aggressive lateral release. A Fulkerson osteotomy was performed using the Arthrex AMZ guide system with cut set to 45 degrees. The tubercle was transferred 9 mm medially and 9mm distally and provisionally pinned to confirm correct location using fluoroscopy. These pins were then removed to facilitate easy access to the patellar articular surface. The thickness of the patella measured (23 mm). A flat cut through subchondral bone of the patella was made. The allograft was cut to appropriate dimensions with careful attention taken to match her native patella (Figure 2b). The allograft was fixed to the patella using Arthrex headless, cannulated compression screws. Five 3.0 mm screws were used proximally and one 2.7 mm screw distally in the patella. These screws were placed under direct visualization and confirmed with fluoroscopy to ensure they were subchondral on the patella articular surface. The Fulkerson osteotomy was then fixed in the previously determined position using x3 4.5 mm large frag lag screws to properly distally realign the patellofemoral articulation.

Attention was then turned to the medial and lateral patellofemoral ligament reconstruction. For the both the MPFL and LPFL reconstruction, a doubled semitendinosus allograft was used. The MPFL was first reconstructed. The free ends of the graft were attached to the native MPFL insertion site the patella at the equator and at the junction of the superior and middle thirds of the patella using x2 2.7 mm all suture Arthrex suture anchors. The looped end was fixed to the native origin site on the femur at Schottle’s point between the adductor tubercle and the medial epicondyle using an Arthrex swivel lock. The graft was tensioned in 30 degrees of knee flexion ensuring the patella was centered in the trochlea. To reconstruct the LPFL graft, the doubled end of the allograft was secured to the femoral origin just distal and anterior to the lateral epicondyle using an Arthrex swivel lock. The graft was attached to the patellar insertion on the equator in the middle third of the patella using a single 2.7 all suture Arthrex suture anchor. The graft was tensioned in 70 degrees of knee flexion to ensure the knee was not overly constrained. With the knee still in 70 degrees of flexion, the remaining tissue of the lateral retinaculum was repaired. Similarly, the remaining medial retinaculum was reefed up onto the MPFL graft with the knee in 30 degrees of flexion. At this point the patella tracked centrally within the patellar groove. It was stable both medially and laterally throughout a full range of motion but had an appropriate medial and lateral subluxation of 9mm with stress testing. Post-operative XR’s can be seen in Figure 3.

Post-operatively the patient was made weight bearing as tolerated in a knee immobilizer for 6 weeks. She was allowed immediate and full passive knee range of motion and active knee flexion out of her brace to prevent stiffness. No active knee extension was allowed to protect her tibial osteotomy. She started using a continuous passive motion machine on the day of surgery set at 0-90 degrees of motion and advanced to 120 degrees within the first week. At 3 weeks post-operatively the patient’s range of motion was 3-90 degrees. And at 12 weeks post-operatively range of motion was 3-130 degrees. At her 2 year post-operative visit the patient had no evidence of patellar instability. Radiographs of the knee demonstrated union of her tibial osteotomy and her patella allograft (Figure 4). She noted mild left quad weakness but was actively working with a physical therapist to improve her strength. Overall, she was extremely satisfied with her result. She was not requiring use of a knee brace, ambulating 5 miles per day for exercise, and pain free in her knee. 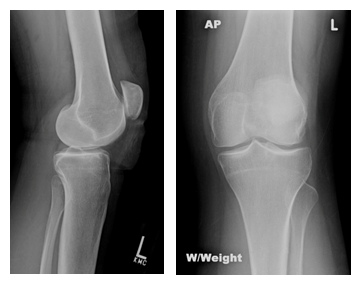 Figure 1a: AP and lateral imaging at time of presentation demonstrating patella alta with Insall-Salvati ratio of 1.5 and crossover sign. 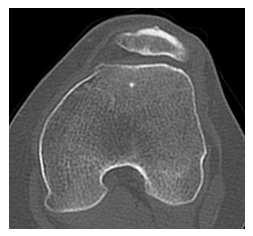 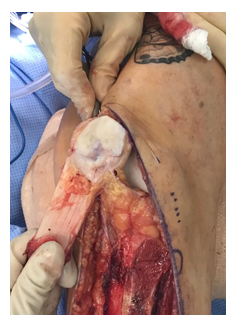 Figure 2a: Grade 3 cartilage loss to a large portion of the patella articular surface. 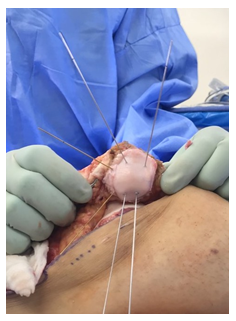 Figure 2b: Patella after placement of size matched allograft. 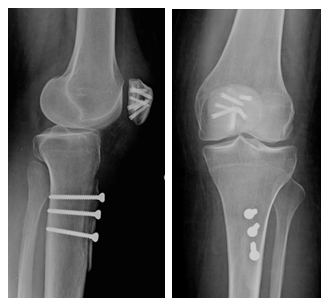 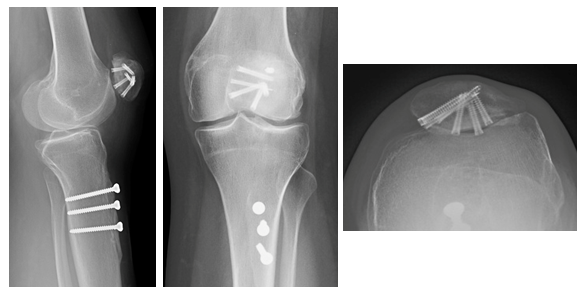 The patient was informed that data concerning the case would be collected and submitted for publication and she provided consent.