A Case Report of Unusual Appearance of Multifocal Nodular Fatty Liver Infiltration with Hemosiderosis in A Patient with Leukemia, the Challenge in Diagnosis

Hepatic steatosis is a frequent finding in computed tomography (CT) and magnetic resonance imaging (MRI). Chemotherapy is a predisposing factor for both fatty liver infiltration and hemosiderosis. Unusual appearance and behavior of multiple focal nodular fatty infiltration is rare to encounter and when associated with history of malignancy and/or infection presents a dilemma that a confident diagnosis might not be rendered by MRI thus a diagnostic biopsy would be needed to resolve the uncertainty in diagnosis. We present a patient with second relapse of acute myelogenous leukemia (AML) who developed fungal pulmonary infection while receiving salvage chemotherapy. Progressive target-shaped focal liver lesions which demonstrated characteristic fatty signal intensity on MRI were seen along with features of hemosiderosis of the liver parenchyma. Target and non-target liver tru-cut biopsies had to be performed to reach the final diagnosis of focal fatty infiltration and to rule out the differential diagnosis of liver abscesses and leukemia infiltration.

Patients suffering from leukemia are prone to many short term and long term complications both from the disease and its treatment. We describe in this case report the challenges of reaching the diagnosis of a benign condition exhibiting odd behavior which required exposing the patient to biopsy to rule out more serious differential diagnosis.

A 33-year-old female patient diagnosed with acute myelogenous leukemia (AML) on December 2013 (at the age of 26). She was treated with 7+3 chemotherapy protocol with Cytarabine and Idarubicin followed by high dose Cytarabine consolidation. The patient was in remission from May 2014 until January 2015 when she developed disease relapse in the bone marrow for which she was induced with Mitoxantron and Etoposide followed by allogenic peripheral hematopoietic stem cell transplantation in March 2015. The patient remained in remission until May 2020 when she was diagnosed with extramedullary myeloid sarcoma of the sacroiliac joints and of the stomach proven by biopsy. Salvage chemotherapy was started in June 2020.

Treatment was complicated in June 2020 with febrile neutropenia secondary to atypical chest infection. This was diagnosed by non-enhanced chest computed tomography (CT) scan. On the lower cuts of the chest CT scan performed in June (not shown) there were multiple target shaped liver lesions. They demonstrated a hypoattenuating rim with central iso-attenuation to the liver parenchyma. When compared to a previous follow up contrast-enhanced abdominal CT scan performed on 64 slice brilliance PHILIPS machine in 2017, the lesions had increased in size and number, which were previously reported as tiny liver cysts, and a diagnosis of fungal liver abscesses versus leukemic infiltration of the liver was suggested.

Since the patient was already receiving both chemotherapy and anti-fungal treatment for the chest infection, no further intervention at that time was undertaken. On a follow up non-enhanced chest CT scan in October 2020 using 256 iCT PHILIPS machine (Figure 1) the liver lesions remained stable after four months of treatment.

There was global loss of hepatic parenchymal signal intensity on long TE sequences attributed to hemosiderosis with more than 30 scattered hepatic lesions measuring up to 1.7 cm. The lesions demonstrated central iso-intense signal intensity on T2 weighted images (WI) with peripheral hyperintense signal. On T1 WI the lesions appeared hyperintense with signal drop on the out-of-phase sequence indicating the presence of fat within the lesions. The post-contrast fat saturated images showed persistent non-enhancing peripheral hypointense rim with similar enhancement of the central parts of the nodules to the liver parenchyma on the sequential images up to 90 minutes post injection of hepatobiliary specific contrast (Gd-BOPTA MultiHance from Bracco). There was no evidence of diffusion restriction within the nodules. Although the fat signal intensity is atypical for liver abscess and for leukemic infiltration of the liver, neither diagnosis could be ruled out completely. Thus, ultrasound guided target and non-target tru-cut liver biopsy was performed in December 2020, which confirmed focal steatosis of the liver from the target biopsy and a background of grade 2-3 hemosiderosis from the non-target biopsy (Figure 3). 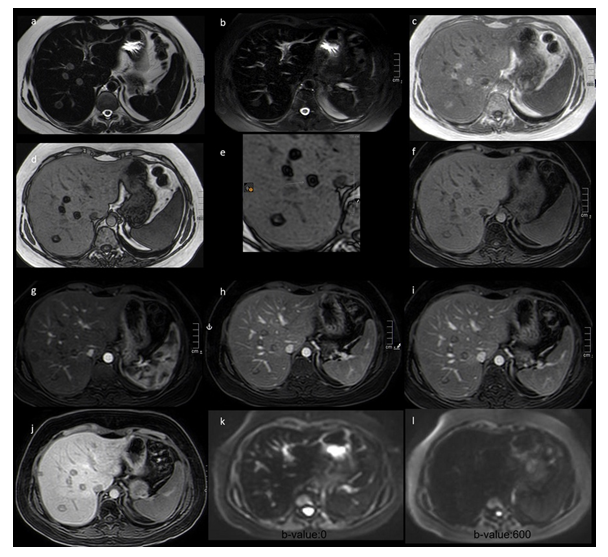 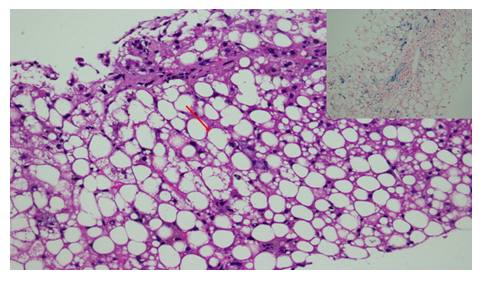 Figure 3: The hepatocytes show ballooning of the cytoplasm due to the presence of variably-sized fat droplets (arrow), (H&E X40). The inset shows iron deposition within the hepatocytes (blue color), Perls’s special stain (X40).

There was no evidence of infection or leukemic infiltration. The patient received external beam radiotherapy to the stomach and to the sacroiliac joints, which was completed on November2020, and is being prepared for the second allogeneic peripheral hematopoietic stem cell transplantation.

We present the radiological findings on CT scan and MRI for the liver of a complicated case known to have extramedullary relapse of AML complicated by fungal pulmonary infection while on salvage chemotherapy showing target shaped liver lesions, which have progressed in size, and number compared to a CT scan done 3 years earlier. The lesions demonstrated MRI characteristics indicating the presence of fatty tissue within the peripheral parts of the lesions, which resulted in the target appearance. The central parts of the lesions showed imaging characteristics and enhancement pattern similar to the adjacent liver parenchyma. On the other hand, the liver parenchyma showed findings indicating hemosiderosis which is attributed to previous frequent blood transfusions. The peculiar shape of the lesions, the interval progression, although appears to be slow, and the clinical findings including the relapsed AML and active pulmonary fungal infection, caused a great deal of uncertainty to reach a confident diagnosis which resulted in undergoing ultrasound guided tru-cut target and non-target liver biopsies to reach a final diagnosis of multifocal nodular fatty liver infiltration with hemosiderosis of the liver.

In our case, the patient is under treatment for relapsed leukemia for the second time in the form of biopsy proven extramedullary myeloid sarcoma involving the sacroiliac joints and the gastric wall, as well as pulmonary fungal infection complicating chemotherapy treatment. Both of these conditions can involve the liver, and produce lesions that radiologically can be among the differential diagnosis.

The top differential diagnosis of progressive focal hypoattenuating liver lesions on CT scan in a febrile leukemic patient would be liver abscesses versus leukemia infiltration. Extramedullary tumor relapse (chloroma) in AML is more common after allogenic bone marrow transplantation, similar to the status of our patient, occurring in up to 21% of cases [1]. AML rarely involves the liver [2], and tends to have nonspecific radiological appearance [3]. When present, this is usually in the form of solitary or multiple well-defined masses, which may measure several centimeters in diameter. A much less frequent appearance is peribiliary infiltration [1].

The two major types of hepatic steatosis are nonalcoholic fatty liver disease and alcoholic fatty liver disease. Other etiologies include metabolic, nutritional, drug induced due to chemotherapy and steroids, and hepatitis C viral infection. Fatty liver infiltration is usually diffuse, but is occasionally focal. The etiology of focal type of the fatty infiltration is not well understood. However, it is suggested to be related to an alternative vascular supply that is distinct from the rest of the liver, which is not from the portal vein or the hepatic artery [4]. This however shows certain anatomical predilection within the liver, namely the gallbladder fossa, subcapsular region, adjacent to the portal vein, or falciform ligament [5]. In one study the multifocal type of fatty infiltration occurred in 22% of the patients with fatty hepatic steatosis [6]. When the focal fatty liver infiltration occurs in other than the characteristic anatomical landmarks within the liver, a confident diagnosis would be rather difficult especially in the context of malignancy and infection.

We could find only a single previous publication by Ichikawa et al. [7] describing target-shaped appearance of the focal fatty infiltration on CT scan but without mention of the same appearance on MRI. Liver MRI is very useful in identifying the fatty signal within the lesions which normally would be very helpful in suggesting the diagnosis. However, in the case of our patient, although the fatty component was demonstrated by the MRI, the dilemma of ruling out the differential diagnosis of leukemic liver infiltration and liver abscesses warranted performing a biopsy.

Focal fatty liver infiltration was described to progress to diffuse pattern [6], nonetheless progression in size and number of the focal lesions was not previously described to the best of our knowledge. In context with the clinical history of this patient, whether the progression could be related to previous chemotherapy or bone marrow transplantation, could not be confirmed and would need further study.

We describe an unusual radiological appearance of multifocal nodular fatty liver infiltration associated with hemosiderosis demonstrating target appearance of the lesions on CT scan and MRI and progression in size and number over the course of 3 years. Although fatty infiltration could be demonstrated by MRI, certain challenging cases, such as ours, may still require performing biopsy for confirming the diagnosis.