Glucose-6-phosphate dehydrogenase (G6PD) deficiency is the most common enzyme deficiency worldwide, with genetic variants resulting in a range of phenotypes that vary from asymptomatic to severe hemolysis. The G6PD deficiency A- variant is associated with hemolysis., typically due to infectious or medication exposures, particularly antimalarials and sulfonamide drugs. We report a case of severe hemolytic anemia in a G6PD deficient patient whose only known exposure was amoxicillin two weeks prior to his episode of severe hemolysis, for which he presented to our hospital. An extensive infectious and hematologic workup resulted negative, with the exception of a positive G6PD deficiency result. Although rare, we suggest that the patient’s severe hemolytic anemia is probably related to amoxicillin exposure.

Glucose-6-phosphate dehydrogenase (G6PD) deficiency is the most common enzyme deficiency, with an estimated 400 million people affected worldwide [1]. There are several variants of the disease resulting in a wide spectrum of presentations ranging from asymptomatic to severe hemolysis. In the most prevalent types, the Mediterranean and the A- variant, hemolysis occurs after an exposure to oxidizing agents, typically antimalarial or sulfonamide drugs; infectious agents, such as Parvovirus, Cytomegalovirus (CMV), or Hepatitis. In this report, we present an intriguing case of severe hemolytic anemia in a 23 year old patient who was exposed to amoxicillin, ten days prior to presentation, and ultimately found to be G6PD deficient. Only two previous associations of severe hemolysis due to amoxicillin exposure have been reported [2, 3] . While rare, no infectious or alternative chemical exposure was found, and no alternative inciting event could be identified. We, therefore, propose that our patient’s presentation of G6PD-mediated hemolytic anemia is likely a result of amoxicillin exposure.

A 23 year old, bi-racial (Hispanic-Caucasian) male was admitted to an outside hospital (OSH) with complaints of jaundice, generalized weakness, and vomiting. On admission, he was noted to have a hemoglobin (Hgb) level of 3.7 mg/dl (Reference Range (RR) 14-18 mg/dl), pancytopenia, and hyperbilirubinemia (total bilirubin 18.9; RR 0.3-1.2 mg/dl). The patient was admitted to the Intensive Care Unit (ICU) and received 13 units of blood during his admission. An extensive workup, including the Human Immunodeficiency Virus (HIV), Parvovirus B19, Cytomegalovirus (CMV), Epstein-Barr virus (EBV), hepatitis panel, and bone marrow biopsy was unrevealing; however, he slowly improved and was discharged home 2 weeks after admission with a Hgb of 8.0 mg/dl. Two days later, he developed non-radiating chest pain, prompting presented to our hospital, at which time he was found to have a Hgb of 8.4 mg/dl. Importantly, 10 days prior to admission to the OSH ICU, the patient had completed a 14-day course of amoxicillin for an infection and subsequent removal of an ingrown toenail. On presentation, the patient denied fevers, chills, rigors, dyspnea, weight-loss, and lymphadenopathy. Review of symptoms was positive for dysuria since placement and subsequent removal of a Foley catheter at the OSH, as well as a mild headache. He reported that he was in his usual state of good health until approximately 1 week after completing the course of amoxicillin, when he began feeling unwell. Two to three days prior to initial admission, he experienced non-bilious, non-bloody emesis and nausea with loose stools. On the morning of admission, his urine became dark and he appeared jaundiced, which prompted his parents to bring him to the OSH’s emergency room. His past medical history was notable for paranoid schizophrenia, for which he was being treated with clonazepam 0.5 mg po BID, quetiapine 25 mg po TID PRN, sertraline 200 mg QD, and ziprasidone 80 mg BID, all of which were discontinued on admission to the OSH. Past surgical history was unremarkable. The patient had no known allergies and denied illicit drug use, tobacco, and alcohol use. Further, the patient was sexually inactive. He had a family history remarkable for unexplained blood clots on his agnate grandmother’s side. A couple of years prior to presentation he had been stationed in Afghanistan without notable illness. On arrival to our medical unit, physical examination revealed a blood pressure of 125/75 Mm Hg, a heart rate of 100 beats per minute (bpm), a respiration rate of 18 breaths per minute, and a temperature of 98.1°F. The patient was alert and oriented, but anxious in appearance. The head-eyes-ears-nose-throat (HEENT) exam revealed scleral icterus, and the cardiopulmonary exam was within normal limits, except for borderline tachycardia. Abdominal exam was notable for diffuse tenderness to deep palpation and splenomegaly without hepatomegaly. No focal deficits were observed on neurological exam, cranial nerves were intact, and no meningismus was appreciated. 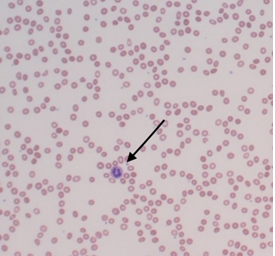 A chest radiograph proved to be normal and abdominal CT showed marked splenomegaly (not shown). CD 4 counts and percentages were normal. Cold agglutinins were negative, as was a COOMBS test. Donnath Landsteiner test was also negative (Table 2). The infectious workup was grossly negative (Table 4). The only source of infection found was the patient’s UA, as above, revealing for a urinary tract infection (UTI) that grew Klebsiella pneumoniae, which was attributed to an indwelling Foley catheter during his 7-day stay at the OSH ICU. Rheumatology tests were also negative, including Antineutrophil Cytoplasmic Antibodies (ANCA) and Rheumatoid factor (Table 2). Subsequently, a bone marrow biopsy was performed, showing a hypercellular marrow (90%) with remarkable erythroid hyperplasia and left shift, mild megakaryocytic hyperplasia without dysplasia or atypia, with no atypical cell infiltrate identified. A repeat reticulocyte count, 11 days after admission, resulted as an absolute value of 0.0261 mill/cmm (RR 0.026-0.095 mill/cmm) and a relative value of 0.9% (RR 0.4-1.9%). G6PD testing by enzymatic methods used for definitive diagnosis [4] yielded positive results for deficiency. The patient’s transfusion requirements diminished, as he only required an additional 2 units of packed red blood cells and was treated for his UTI with ciprofloxacin.

The patient was discharged on a steroid taper and folic acid. Two months after discharge, hemoglobin normalized to 15.5 g/dl. He continued to improve steadily at home and three months after initial symptoms, he fully recovered and returned to his prior state of health and activity level. He has not had any further hemolytic events, however received follow-up in our Hematology/Oncology clinic.

G6PD is the most common enzyme deficiency worldwide, with a global prevalence of 4.9% [1]. For the majority of people affected, G6PD deficiency is asymptomatic; however, upon exposure to oxidizing or infectious agents, hemolysis can occur, leading to precipitous drops in blood counts requiring hospital admission and blood transfusion. The patient described in this case report presented with severe hemolysis, requiring multiple administrations of blood products, in addition to an extended hospital admission due to ongoing hemolysis. After extensive laboratory testing investigation, G6PD deficiency was revealed. Interestingly, the only new exposure prior to the onset of hemolysis was to amoxicillin, which albeit rare, has previously been reported to induce hemolysis in two prior published cases [2, 3], with one being in a G6PI deficient patient [2]. Although our patient was 10 days post-exposure at initial admission, he reported a 1-week history of symptoms, which fits with the reported timeline in these previously-published cases.

methods. A repeat reticulocyte count 11 days after presentation indicated a mild improvement, but the response remained suboptimal. Aplastic crisis has been previously reported in G6PD deficient patients, however, these were found to be a result of inciting viral infections such as CMV [5] and Parvovirus [6], which were not detected in our patient. Furthermore, splenomegaly has been associated with ongoing hemolysis in G6PD deficient patients and may explain the lack of reticulocytosis due to splenic sequestration and subsequent destruction.

The extended duration of chronic ongoing hemolysis was similar to that seen in the autoimmune hemolytic anemias. However, arguing against this etiology was a negative Coombs test, as well as a high bilirubinemia, which is not typically seen in immune-mediated reactions. After exhausting our investigation for potential triggers of hemolysis in G6PD deficient patients, no other alternate source accounts for our findings. In addition to inducing hemolysis in G6PD deficient patients, amoxicillin and amoxicillin/clavulanic acid combinations have both been reported to cause neutropenia and pancytopenia in non-G6PD deficient patients being treated for a variety of infections [7-9]. Further, there are 97 reports of bone marrow failure associated with amoxicillin that were reported to the U.S. Food and Drug Administration (FDA) [10]. Additionally, there are many reports of the combination amoxicillin/clavulanic acid antibiotic therapy causing hepatotoxicity [11] and some reports of amoxicillin alone causing hepatitis [12,13], as was observed in our patient.

Oxidative stress is a known mechanism of drug-induced hemolytic episodes in G6PD deficient patients [14-16]. G6PD protects cells from oxidative stress by playing a role in the reduction of glutathione, an important antioxidant and an essential component required for the maintenance of the normal RBC structure [17]. Bactericidal antibiotics, including β-lactams such as amoxicillin, have been shown to cause mitochondrial dysfunction and reactive oxygen species (ROS), resulting in oxidative damage [18]. Due to the late presentation of the patient to our hospital, direct confirmation of amoxicillin-induced hemolysis was not possible; however, our findings strongly suggest that this patient’s severe hemolytic anemia was possibly associated with amoxicillin exposure. Oxidative stress (potentially as a result of amoxicillin exposure), which is a known initiator of hemolysis in G6PD deficient patients, may have been severe enough to produce significant, ongoing hemolysis, as well as hepatotoxicity and subsequent splenomegaly in this case presentation. It would be of particular interest to perform genotyping testing of G6PD deficient patients to define particular G6PD variants that could determine which patients would be especially susceptible to amoxicillin-triggered hemolysis. New insights into G6PD polymorphisms may provide some clarification and better allude to the potential susceptibility of those patients that would respond with a severe hemolysis after amoxicillin exposure.

In conclusion, we describe an unusual presentation of severe hemolytic anemia, likely related to amoxicillin exposure in a G6PD deficient patient. These findings, in conjunction with previously-published cases, highlight the need to consider amoxicillin as a cause for the presenting symptoms described in this case report. Increased awareness of such potential would warrant caution when prescribing amoxicillin to G6PD deficient patients and may argue for further characterization of the precise G6PD variant, once a deficiency has been established.

The authors do not have any disclosures.

This material is the result of work supported in part with resources and the use of facilities at the Atlanta VA Medical Center.

We thank Thomas Bartholomew for his editing suggestions.