Abnormal Automatic Movements after Dexmedetomidine Administration in a Newborn: A Case Report

Dexmedetomidine is a selective alpha2-adrenoceptor agonist with anesthetic and sedative properties likely due to inhibition of norepinephrine release in the brainstem. Dexmedet omidine is commonly used in adults for sedation, usually in association with other anesthetic drugs. In pediatrics, especially due to the optimal tolerability of this drug and the low invasiveness of the intranasal way of administration, the use of dexmedetomidine is becoming more common for sedation, both in ventilated patients and for periprocedural anesthesia. In our report, a single dose of dexmedetomidine was administered for the periprocedural sedation of an ex-preterm male infant, 88 days after birth, on the occasion of a follow-up non-contrast brain-MRI. About 10 minutes after intranasal administration, the patient developed multiple diaphragmatic automatic hiccupcontractions, which, despite not harming the vital parameters, made necessary a double dose of IV midazolam in order to appease them and to permit the regular execution of the instrumental procedure. The movements continued in the following hours, without affecting vital parameters. After about 8 hours of observation, the movements gradually disappeared. The patient went through normal development and no obvious abnormalities were pointed out in the hemogasanalysis, at the MRI, and not even in a follow-up polysomnography with electroencephalogram executed a few weeks after the event. In conclusion, our report could suggest that even low doses of dexmedetomidine may cause mild transitory neurological adverse effects such as automatic movements in newborns.

Dexmedetomidine hydrochloride (DEX) is a selective alpha2 -adrenoceptor agonist (ATC: N05CM18) with anesthetic and sedative properties [1]. DEX induces sedation by decreasing the activity of noradrenergic neurons in the locus coeruleus (LC) in the brainstem and increasing the activity of inhibitory gamma-aminobutyric acid (GABA) neurons in the ventrolateral preoptic nucleus (VLPO) of the anterior hypothalamus [2]. In particular, the binding of DEX to α2-adrenoceptors in the LC, activates the inwardly rectifying K+ channels and the inhibition of voltage-Ca2+ gated channels. The resulting hyperpolarization reduces norepinephrine release by the LC neurons allowing the presynaptic inhibition of their terminals [3, 4]. A decrease in noradrenergic discharge disinhibits galanin and GABAergic VLPO neurons, which are thus activated [5, 6]. Regarding the sedative effect induced by DEX, this indicates that GABA is an important neurotransmitter downstream of the DEX binding site in the LC, although DEX does not bind directly to the GABA type A receptor [7].

Thanks to the selective activity on alpha-2 adrenergic receptors, DEX presents a wide range of pharmacological properties. DEX is often used alone or in association with other anesthetic drugs for sedation in adult people, because of the good efficacy profile and optimal tolerability [8, 9]. The main reported side effects involve the cardiac system and include mild bradycardia and hypotension [9]. On the other hand, one of the most appreciated DEX features is the relative absence of respiratory depression among the side effects [10]. Moreover, in comparison with other anesthetic drugs, DEX reduced the duration of mechanical ventilation need compared to midazolam and improved patients’ interaction compared to midazolam and propofol. DEX may also have relevance in opioid-sparing strategies [11].

In pediatrics, the use of DEX is progressively gaining traction for peri-procedural anesthesia [12-15] or mechanical ventilation related-anesthesia [16, 17], as well as for the good efficacy profile and excellent tolerability, also due to the availability of a formulation for intranasal administration, which is particularly rapid and less invasive to be administered, especially when dealing with infants [18]. Moreover, this kind of formulation has a more gradual onset that may actually be desirable in avoiding the alpha-1 agonist effects seen with rapid IV administration (hypertension and brady-cardia) [19]. This report describes the case of a newborn who developed automatic diaphragmatic movements soon after intranasal DEX administration.

The patient was an 88 days postnatal-age, 3100 g weight, Hispanic male infant. He was born in our Hospital after 26+4 gestational-age, 1130 g birth weight (VLBW) from spontaneous vaginal delivery      with a 7-8-10 Apgar-score (at 1'-5'-10'). He presented good adaptation to extrauterine life. The nCPAP assistance started in delivery room with FiO2 30% but it was quickly reduced to 21%. He was then transferred to NICU for the appropriate treatment and care. The baby continued the non-invasive ventilatory assistance through nCPAP for two weeks and subsequently through HFNC for 3 other weeks. The patient was discharged at 2 months of age. Since then he has always remained spontaneously air-breathing. All the instrumental tests performed during hospitalization gave negative results, not recording anomalies of any particular significance. At discharge, the growth parameters were: weight 2120 g, length 46 cm, head circumference 31 cm. General and neurological objectivity was negative.

At almost 3 months of age (88 days), the infant was called up for a planned follow-up non-contrast brain-MRI. Before the procedure, a dose of 13 mcg of intranasal DEX was administered for sedation. About 10 minutes after intranasal administration, the patient developed multiple diaphragmatic automatic hiccup-contractions, that, despite not harming the vital parameters (SpO2=98%, HR=115 bpm), made necessary a double dose of IV midazolam (40 mg overall) in order to appease them and to permit the regular execution of the instrumental procedure. After a transient remission of the symptoms, the movements continued throughout the following hours, even though without altering the main vital parameters. For this reason, the baby was transferred to the NICU for observation. About 8-10 hours after DEX administration, all the abnormal automatic movements had disappeared and the patient was discharged the following morning.

The MRI did not report any pathological evidence. One month after discharge, a follow-up polysomnography with electroencephalogram (EEG) was programmed. The exam report did not show any particular underlying condition that could explain or be connected to the abnormal automatic movements that we described after DEX exposure. Also, even the child neuropsychiatric examination showed objectivity compatible with age, with no sign that could be related to the previous event. After the overall clinical and instrumental evaluation, we could not find any other reason, but DEX exposure, that could explain why the patient developed the aforementioned movements. Although no short-term neurological outcomes have been recorded, further clinical checks will be performed during neurological follow-up until 3 years of corrected age.

In pediatrics, DEX can be used for peri-procedural sedation before instrumental procedures like CT, MRI, or EEG [12-15], and it is very appreciated by physicians because of its good efficacy profile and excellent tolerability. The main reported side effects include mild bradycardia and hypotension, but, apart from this, the drug also seems to have less impact on respiratory rate [9] and even on brain development, showing an optimal safety profile especially for pediatric population [20, 21]. In this case report, we describe the appearance of abnormal automatic movements in a preterm newborn few minutes after DEX intranasal administration for peri-procedural sedation before an MRI procedure.

Nervous system-related adverse reactions are reported, especially in adult population, but more commonly they include agitation or at least anxiety or withdrawal syndrome (in case of prolonged sedation). Other signs and symptoms (chills, confusion, delirium, dizziness, hallucination, headache, hyperpyrexia, illusion, neuralgia, neuritis, pain, seizure, speech disturbance) are less reported, especially in pediatric population [1, 9]. Kubota et al. (2012) described a case of a term infant who developed epileptic and not epileptic automatic movements and seizures, hours after DEX IV administration. In that case, contrary to what is described here, the patient was born at term and the event onset was delayed many hours (about 80 hours) after DEX prolonged infusion and was associated with marked blood pressure elevation and desaturation. The authors in that case also prescribed an EEG in the acute phase of the movements, which registered repetitive ictal changes with transient elevation of the lower border which could correspond to ictal changes on conventional EEG showing stereotyped, semirhythmic, repetitive, and sequential delta/theta activity arising from multiple regions.

Moreover, the authors also declared that it was difficult to clarify the detailed temporal relationship between the EEG findings and motor phenomena [22]. In the aforementioned case, the authors speculated that the pharmacodynamic reason that could explain DEX association with that kind of abnormal movements and seizures was to be sought in the effect that DEX has on the LC, which is also involved in the anti-seizure activity of the vagal nervous system in such a way that decreased activity of noradrenergic neurons in the LC induced by DEX could decrease the seizure threshold in humans as it is supposed to happen in animals [22-24].

Research in adrreports.eu, the official EudraVigilance and EMA database of suspected adverse drug reaction (ADR) reports, shows that nervous system-related ADRs to DEX (Dexdor) have been reported, but we could not find any report of a suspected reaction to Dexdor compatible with the one that we described for the age range of our patient (Figure 1) [25]. Using the Naranjo Algorithm, one of the conventionally most used instruments to determine the correlation between drug exposure and a pharmacological adverse event, we found a score of 6/13, that classified the suspected ADR as “probable” (Table 1) [26], in particular for the rapid onset of the reaction after the drug administration, the absence of underlying risk factors or conditions, and the spontaneous resolution of the signs and symptoms a few hours after drug suspension.

Table 1: Probability of a cause-effect relation between DEX administration and the ADR described in this case report calculated by Naranjo Algorithm [26]. 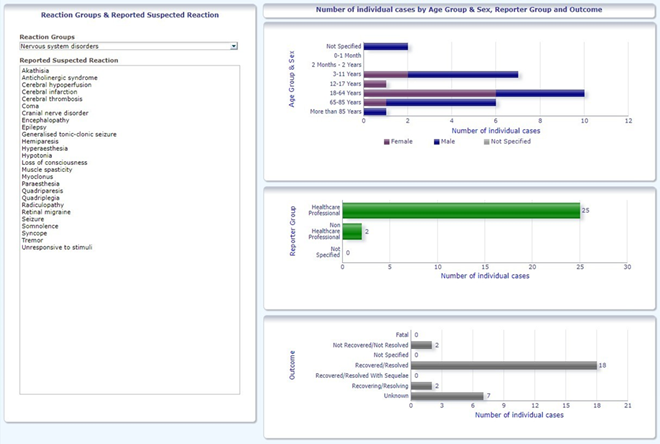 Figure 1: Number of individual cases identified in EudraVigilance for DEXDOR (up to 06/11/2021) from adrreports.eu.

To our knowledge, this is the first report of DEX-related abnormal automatic movements in an ex-preterm newborn. Based on the clinical manifestations that we could observe in this case and having gathered all the information and reports that could be found in literature and on pharmacovigilance databases, we suggest that DEX could induce nervous-system-related ADRs such as abnormal automatic movements, even in preterm newborns and even with a single intranasal administration. The ADR could not be related to vital parameters alteration or agitation. We also suggest that the ADR could have rapid onset (a few minutes), but may need several hours to resolve, while a medical/pharmacological intervention may not even be necessary. However, although no short-term neurological outcomes have been reported, further neurological follow-up is supposed to be indicated.