7Department of Anesthesiology and Reanimation, University Clinical Center of Kosovo

8Department of Gastroenterology and Hepatology, University Clinic Hospital of Kosova

Cryptorchidism is a broad term encompassing several distinct entities. True, false cryptorchidism and ectopia testis are congenital disorders. Rarely, cryptorchidism has acquired character. Testicular ascent is also sometimes known as acquired cryptorchidism with an unclear association. Various extracutaneous abnormalities have been reported in some patients with an increased incidence of testicular cryptorchidism. X-linked ichthyosis is a genetic disorder of keratinization characterized by a generalized desquamation of large, adherent, dark brown scales. Steroid sulfatase (STS) deficiency is one of the causes of ichthyoses. STS genes on the X chromosome is responsible for this disease. Herein we report a case of STS deficiency complicated with an acquired cryptorchidism. A 12-yearold- boy with STS deficiency was referred to our hospital because of emptiness of his right scrotum. In early childhood at 5 years of age his skin was excessively dry and scaly by visible scaling and/or hyperkeratosis of most or all the skin in the lower extremity. The child underwent immediate orchiopexy via a groin approach and the testis was successfully mobilized into the scrotum.

UDT is one of most common pediatric disorders at birth among male children. Undescended testis (UDT) could present during later into childhood years when the child is between one and 10 years old. This phenomenon is named as acquired UDT (35%) which is manifested with the absence of one or both testes in normal scrotal position. An ascending testicle or acquire undescended testicle, that has returned to the groin and can be easily guided by hand into the scrotum. Based on the routine examination, the physician determines this illness. Since the etiology remains unclear and the disorder is very well-known, testes at birth have descended at 96% rate therefore 1 year old boys the incidence reaches 0.8% which usually occurs on the right 50% and on the left 35% as well as at a bilateral rate of 10-15%. Determine whether the testis is palpable or not, is crucial when contemplating the differential diagnosis for cryptorchidism. Early detection is crucial to prevent high risk of Acquired UDT which is linked to testicular cancer in adulthood (though the risk is still less than 1 in 100). Whereas Testicular torsion (twisting of the chord that brings blood to the scrotum) developing a hernia near the groin [2-4].

A 12-year-old boy was referred to our hospital by his pediatrician because of emptiness of his right scrotum. He was born at term with no significant medical history. At admission vital signs were normal. His heart, lung, and abdominal examination was normal. Laboratory: hemoglobin 14.1 gm%, white blood cell counts 11.4/mm3, uranalysis was normal. Physical examination revealed an empty right hemi-scrotum and a mass over the midpoint of the inguinal canal. The left testicle resides, shape, and consistency was in the scrotum with a normal size. The right hypotrophic testis was palpable in the middle of the inguinal canal. Ultrasound examination reveals a right testis with homogeneous low-to medium- level echogenicity and was spherical in shape. The testis measures 3 to 5 cm in length and 2 to 3 cm in depth. Also, pulsed wave Doppler testicular flow was normal. In addition, he presented with severe, hyperkeratotic plaques of the lower extremities. In early childhood at 5 years of age his skin was excessively dry and scaly by visible scaling and/or hyperkeratosis of most or all the skin in the lower extremity. Family was counseled about the disease and possible precipitating factors. There was no family history of similar kind of illness. There was no history of any drug intake prior to the scaling. Further evaluation through STS assay and PCR amplification of 5'-3' ends of the STS gene were analyzed. Undetectable levels of STS activity and complete deletion of the STS gene were found, and the patient was diagnosed with XLR ichthyosis. The child underwent immediate orchiopexy via a groin approach and the testis was successfully mobilized into the scrotum. The postoperative recovery was uneventful. Follow-up six month later the right testis was into the scrotum with normal ultrasound examination. 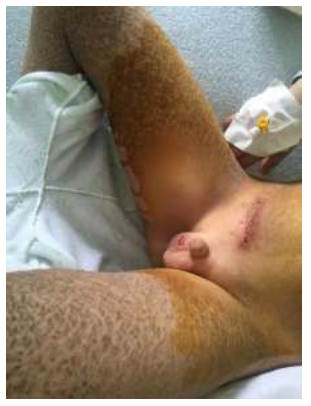 The failure of testis descent in the scrotum is known as cryptorchidism or UDT. It is more frequent in premature male neonates, with an incidence varying from 1-4 % in full-term and 1-45% in preterm male [1]. Cryptorchidism is a rare but significant defect that occurs when the testis does not descend properly. It usually affects male neonates and is characterized by spontaneous descent. The defect is linked to various genetic and environmental factors. 60% of newborns experience spontaneous descent by the age of six months. Down syndrome, Klinefelter syndrome, and prune-belly syndrome are all linked to cryptorchidism. It can also be found in disorders like posterior urethral valve, abdominal wall defects such as omphalocele and gastroschisis, and neural tube anomalies like myelomeningocele, spigelian hernia, and cerebral palsy. The UDT has a higher risk of cancer than contralateral descended testis. The contralateral testis is a type of testis that shows an increased risk of developing cancer. The unusual environment in cryptorchidism causes gonocytes to accumulate within the seminiferous cords and undergo mutations. The contralateral descended testis is a known risk factor for cryptorchidism. The high temperature environment which can inhibit the development of gonocyte stem cells and trigger subsequent apoptosis are some of the factors that contribute to this risk. Gonocytes accumulate within the seminiferous cords and develop into cancer cells. They can become the source of these cells through mutations [2]. The testis develops in relation to the posterior abdominal wall. They reach the iliac fossa in the third month of intrauterine life and the deep inguinal ring in the seventh month.

During the seventh month, they move through the inguinal canal and are in the scrotum by the end of the eighth month. The descent of testis is carried out in two phases [3]. The first phase involves moving across the abdomen to the inguinal canal- Sertoli cells secrete anti-Mullerian hormone, which influences this phase. The second phase involves moving through the inguinal canal. The normal attachment of gubernaculum to the scrotal ligament plays a crucial role in the complete descent of testes, especially in the second phase.

In some cases, the ligament is attached to the pubic region, undescended testis on the right could be the result of this. The incidence of undescended testis in men ranges from one in 1,000 to one in 2,500 [4]. Testicular torsion and inguinal hernia are two frequent side effects of an undescended testis. The condition usually affects males and can lead to poor sperm quality [5]. Determine whether the testis is palpable or not, is crucial when contemplating the differential diagnosis for cryptorchidism. If palpable, It could be one of three diagnosis:

This happens when the testis is missing from the scrotum due to an abnormally strong cremasteric reflex, but it may be brought back into place during your physical exam by overriding that reaction. It is not always easy to tell the difference between a real undescended testis and a retractile one. Undescended testes are linked to the same difficulties as retractile testes. While most cases of cryptorchidism present unilaterally, up to one-third of cases present bilaterally. Congenital absence of the vas deferens (CAVD) can be unilateral (CUAVD) or bilateral (CBAVD), and it accounts for 1-2 percent of male infertility. In this way, in patients with cryptorchidism, the presence of vas deferens ought to be assessed during scrotal palpation and stomach ultrasound study is additionally prescribed to assess some other coinciding irregularities like renal agenesis.Additionaly more, CFTR quality investigation may be additionally useful to assess the presence of inactive cystic fibrosis [8].

Our case report highlights the importance of a periodic testicular evaluation in XLI due to the association with acquired cryptorchidism. In addition, we suggest that this case report will result to provide more information for genetic counselling reinforce the need for multidisciplinary medical counseling, even though the association of cryptorchidism and X-linked recessive ichthyosis are not mutually exclusive, but rather may both contribute to this association.