Eosinophilic Granulomatosis with Polyangiitis (EGPA), commonly known in the past as Churg-Strauss syndrome, is a necrotizing systemic vasculitis accompanied by remarkable eosinophilia. Heart involvement occurs in approximately 15-60% of EGPA patients, especially those who are ANCA negative. Any cardiac structure can be involved. Heart involvement carries a poor prognosis and causes 50% of the deaths of these patients. It is often insidious and underestimated. Early diagnosis of cardiac involvement and subsequent therapy may prevent progression of cardiac disease. To our knowledge, so far there are only few cases reported in the literature describing pericarditis as a presenting feature of EGPA. Here we report a case of a 54- year- old male with history of repeated sinusitis and mild asthma admitted to our department for worsening dyspnea and chest pain with consequent diagnosis of acute pericarditis due to unknown EGPA. This case suggests that acute pericarditis can be the initial clinical feature of onset EGPA, even in patients with mild asthma history. Early diagnosis of cardiac involvement prevents progression of cardiac disease.

Eosinophilic Granulomatosis With Polyangiitis (EGPA) was first described by Churg and Strauss in 1951 [1]. The disease, newly recognised as part of Anti- Neutrophil Cytoplasm Antibody (ANCA)-Associated Vasculitis (AAV), is characterized by eosinophil-rich granulomatous inflammation and small to medium-size vessel vasculitis associated with asthma and eosinophilia [2]. ANCA are positive in 40-60% of cases, mainly anti-myeloperoxidase. Typical clinical features include asthma, sinusitis, transient pulmonary infiltrates and neuropathy. Blood eosinophils are often >1500/µl or more than 10% on the differential leukocyte count. Heart involvement occurs in approximately 15-60% of EGPA patients, especially those who are ANCA negative. Any cardiac structure can be involved, and patients present with myocarditis, heart failure, pericarditis, arrhythmia, coronary arteritis, valvulopathy, intracavitary cardiac thrombosis. All patients with EGPA should be studied not only with a detailed history of cardiac symptoms and ECG, but also with echocardiography; if abnormalities are detected, a cardiac magnetic resonance study should be performed. Coronary angiography and endomyocardial biopsy should be reserved to selected cases. Heart involvement causes 50% of the deaths of these patients. It is often insidious and underestimated. Early diagnosis of cardiac involvement and subsequent therapy may prevent progression of cardiac disease [3]. Here, we present a case of a 54-year-old male with asthma-like symptoms and sinus pathology refractory, as well as eosinophilia and unexplained cardiac disorder. This case highlights the need to collect a complete clinical history, involving a multidisciplinary team for prompt intervention in EGPA once the disease is identified. It also demonstrates the benefit of prompt intervention, through the rapid improvement seen in the patient thanks to high-dose corticosteroids plus immunosuppression.

A 54-year-old male with general fatigue, fever and a 1-year history of asthma was admitted to our hospital for dyspnea and chest pain associated with first finding of peripheral eosinophilia. He suffered from grass pollen allergy, polyposis and chronic rhinosinusitis since several years. Treatment with inhaled fluticasone/formoterol was ineffective. Few months before he complained episodes of migrating pain in left shoulder, ankles, wrists and hands. On admission to the unit, the patient had severe dyspnea, pulse 75 beats/min, and blood pressure 94/60 mm Hg. Auscultation of the chest demonstrated pericardial friction rub. During the hospitalization, electrocardiogram, cardiac echocardiography, cardiac MRI, chest CT, abdominal echography, blood tests, electromyography and ophthalmology examination were performed. 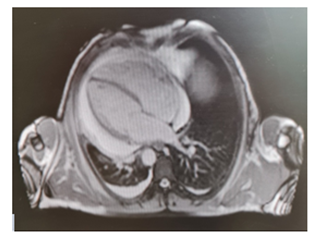 Figure 1: MRI revealed ubiquitous pericardial effusion of moderate-severe degree with a maximum detachment of 3 cm without signs of haemodynamic compromise. 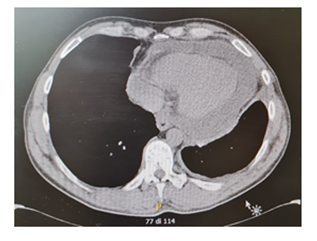 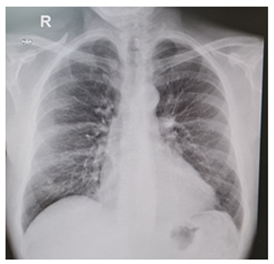 Eosinophilic granulomatosis with polyangiitis (EGPA) is a rare subtype of ANCA-associated vasculitis characterized by asthma, rhinosinusitis, peripheral eosinophilia and manifestations due to small-vessel vasculitis [7] (Table1). EGPA has been classically described to evolve through three different phases, starting with a prodromic allergic phase characterized by asthma and rhinosinusitis, followed by an increase in blood and tissue eosinophilia, and in the last phase patient show systemic symptoms and organ involvement due to small-vessel vasculitis [8]. Heart involvement occurs in approximately 15-60% of EGPA patients and is one of the most severe manifestations in EGPA, often leading to death. Interestingly, it has been shown that cardiac involvement is often found in ANCA-negative patients [9]. Typical manifestations include myocarditis, heart failure, arrhythmia and pericarditis, though it has been suggested that many patients with cardiac involvement may be asymptomatic [10]. Pericarditis, which is one of the major cardiac manifestations in EGPA, presents typically with slight pericardial effusion, even though few cases of cardiac tamponade have been reported [11]. To our knowledge, so far there are only few cases reported in the literature describing pericarditis as a presenting feature of EGPA [12-14]. Here we present the case of a 50-year-old male with a history of asthma, polyposis and chronic rhinosinusitis who was admitted to our hospital for dyspnea and chest pain. Laboratory test revealed an increased in eosinophilic count as well as inflammatory markers and radiological investigations showed sign of pericarditis and pleural effusion. Other causes of pericarditis were ruled out and the diagnosis of EGPA was made based on ACR/EULAR criteria [15] (Table 2). In order to avoid toxicity of cyclophosphamide and considering his clinical status, we decided to treat our patient with high dose of glucocorticoids followed by a combination of parenteral methotrexate and glucocorticoids. We would have added cyclophosphamide if systemic glucocorticoids alone had not achieved remission. Instead, the chosen treatment produced a progressive reduction in the size of the pericardial and pleural effusion, as well as the normalization of the eosinophil count and inflammatory markers. In summary, here we report a case of acute pericarditis leading to a new diagnosis of EGPA. This case highlights the need to consider EGPA as differential diagnosis in patients with pericarditis presenting with asthma-like symptoms and sinus pathology, as well as persistent eosinophilia. Blood eosinophils should always be tested in unexplained cardiac disorders and may normalize even after low doses of corticosteroids.

Table 1: Definitions of AAV according to Chapel Hill Consensus Conference (CHCC) in 2012.