Electrical injury represents one of the most serious public health problems in both developing and developed countries, and occurs in both home and workplace settings [1, 2]. Electrical injuries may be caused by a wide range of factors, with a heterogeneous spectrum of resultant lesions, ranging from small skin burns to life-threatening injuries [1, 3, 4]. A previous study has reported that high voltage electrical burns induce changes in arterial function. The report documented that alterations in arterial function increased the risk of thrombosis and stenosis. However, there was no mention of resultant hypertension [5]. Here we describe a case of new-onset hypertension following an electrical injury that was treated with a beta-blocker.

A 50-year-old man was admitted to our institute with high voltage (22,900 V) electrical injuries. He had sustained injuries to both hands; the total body surface area of the burn was 2% (Figure 1). Since the patient had lost consciousness for a few seconds at the time of injury, he did not notice the entrance and the exit of electricity. He was a never smoker and had no significant past medical history. The initial blood pressure (BP) on admission was 110/70 mmHg. The wounds on both the hands were dressed aseptically. However, active bleeding was noticed from the right index finger on admission day 13. Wound ligation was performed the next day, which arrested bleeding. Seven days later, a full thickness skin graft (FTSG) with debridement was performed on the right 3rd, 4th, and 5th fingers, and on the left 1st, 2nd, and 3rd fingers.

After surgery, the patient received patient-controlled analgesia (PCA) with a mixture of fentanyl citrate, ketamine, and ramosetron at doses of 2.355 mg, 1,000 mg and 0.6 mg. Following the skin graft, the patient’s BP rose to a maximum of 160/100 mmHg, requiring cardiological consultation. Although the patient did not complain of any pain at the operated site, the cardiologist recommended active pain control with simultaneous investigations to identify the cause for BP elevation. The patient underwent testing with 24-hour ambulatory BP monitoring (ABPM) and an echocardiogram. Since he could not endure the pain of arm compression by the cuff during the 24-hour ABPM, the ankle-brachial index (ABI) was performed instead. The ABI was found to be in the normal range, but the blood pressure was elevated in each extremity (Figure 2). The echocardiogram did not demonstrate left ventricular (LV) hypertrophy or increased LV mass index. The patient was diagnosed as a case of new-onset hypertension. He was accordingly prescribed sustained release (SR) carvedilol (nonselective 3rd generation beta-blocker) at a dose of 8 mg once daily. One month after prescription of the medicine, although the patient’s systolic BP dropped to 130~140 mmHg, the systolic BP intermittently rose to 150 mm Hg. The dose of carvedilol was accordingly increased to 16 mg, following which his BP was maintained in the normal range (Figure 3). 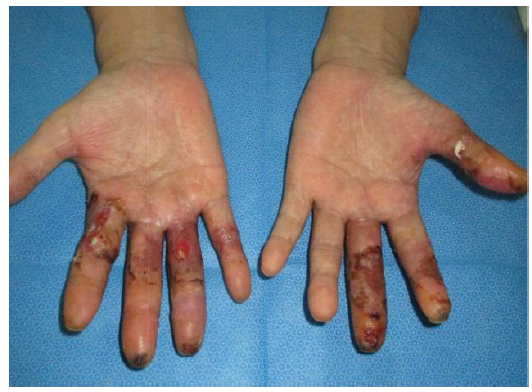 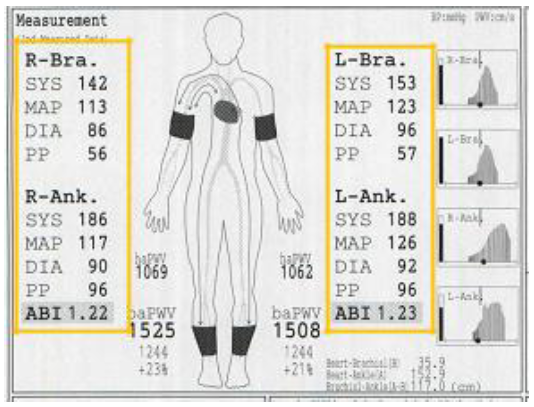 Figure 2: Ankle-Brachial Index (ABI) was performed instead of 24-hour ambulatory blood pressure (BP) monitoring. It showed elevated BP in all of the patient’s extremities (orange boxes). 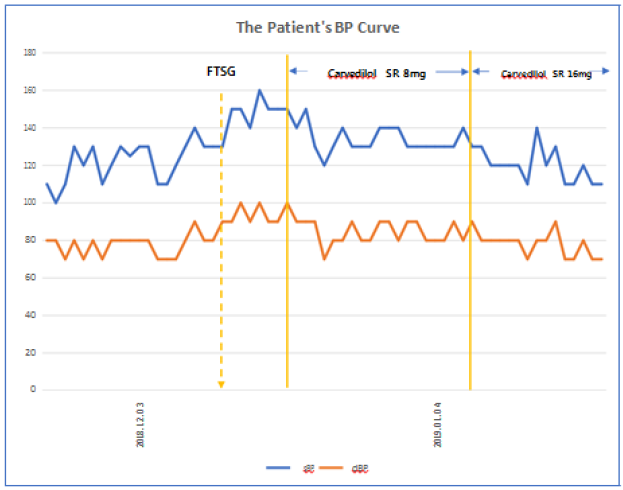 Beta-blockers no longer occupy the first-line status among the various classes of antihypertensive agents [9]. However, Arbabi et al. reported that beta-blocker therapy demonstrated beneficial outcomes in selected trauma patients. Traumas including burns induce increased protein catabolism, leading to the loss of body mass and muscle [10, 11]. Beta-blockers have also been found to decrease energy expenditure, and cardiac complications, reducing overall mortality [12, 13]. Although beta-blockers are not first-line antihypertensive agents in hypertension guidelines, we had chosen a beta-blocker for this patient based on the results of these previous studies.

In conclusion, it is essential to recognize that electrical injuries form a category of burn injuries which may induce hypertension. Hypertension induced by trauma, burn injuries, and surgical procedures is a distinct entity; beta-blocker therapy may be helpful in controlling blood pressure in these conditions. Further studies are necessary with regard to electrical injuries and their complications.

The patient provided informed consent for publishing this data.

We extend our thanks to the patient for allowing this report.