Globally, breast cancer in men is exceedingly uncommon. The misinterpretation of signs and symptoms and lack of a proper medical history can lead to the progression of rare conditions to advanced stages. We report the case of a 65-year-old man who presented to the clinic complaining about progressive bilateral dull breast pain. He had been diagnosed with bilateral grade II invasive ductal carcinoma three months prior, and he underwent bilateral mastectomy followed by chemotherapy as a part of his treatment plan.

Breast cancer in men tends to be diagnosed at advanced stages compared to women. Most diagnosed breast cancers in men take an invasive form, with invasive ductal carcinoma being the most prevalent. It is very rare to see ductal carcinoma in situ among men with breast cancer since it does not usually manifest as a palpable mass [1]. Male breast cancer patients generally have a lower survival rate because diagnosis is usually at advanced stages, leading to a shorter life expectancy [2]. In the absence of recommended screening in the general population for male breast cancer, taking an accurate medical history and conducting a thorough physical examination are crucial in distinguishing the etiologies of breast masses.

A 65-year-old man presented to the general surgeon with a two-month history of bilateral dull breast pain that had been worsening between his first and second visits. During his second visit, the patient rated his pain as a 7/10 and claimed that he occasionally felt a mass on each breast. The patient’s past medical history was significant for type 2 diabetes mellitus, which was controlled by metformin, and hypertension, and the patient reported alcohol abuse and a 10-pack year smoking history. The patient denied a history of drug use. He currently works as a truck driver. His son was diagnosed with pancreatic cancer at 34, and his sister died of breast cancer at 59. The patient denied any significant weight loss, night sweats, or fever. On physical exam, there was bilateral breast tenderness along with 3 cm and 4 cm firm but mobile subareolar masses on the right and left breast, respectively. There was no skin dimpling or nipple discharge, and no enlarged lymph nodes, abnormally enlarged testicles, or hepatomegaly was observed.

On his first visit to the physician’s office, he was diagnosed with gynecomastia and was offered elective surgery, which he refused. After two months, he was referred for further evaluation due to increasing pain and the prominent bilateral palpable masses noted on his second visit.

Laboratory investigations consisting of routine blood work and tumor markers were normal. Ultrasound revealed a hypervascular 3 cm x 2.5 cm hypoechoic mass with spiculated margins and posterior acoustic shadowing on the left and right breast, respectively. Ultrasound-guided core needle biopsy (CNB) yielded four creamy, yellow, needle-shaped soft tissues measuring 3 cm x 2.5 cmx 1.5 cm and 2.7 cm x 2 cm x 1.5 cm from the left and right breast, respectively. Microscopic sections (figure 1A-B) from the left breast indicated a malignant tumoral lesion composed of infiltrating nests and few tubules (T: 3/3) consisting of atypical cells with hyperchromatic and pleomorphic nuclei (P: 3/3) associated with mitotic figures (M: 2/3), desmoplastic stroma, and necrosis. A similar presentation was observed on the right side, except no necrosis was noted. Immunohistochemistry analysis revealed that the bilateral breast masses were positive for ER and PR but negative for HER2. The Ki67 index was less than 10% in the left breast and approximately 20% (tumor hotspot) in the right breast. Based on the CNB and FNA reports, bilateral grade II invasive ductal carcinoma was the final diagnosis. Post-mastectomy (figure 2), the diagnosis was confirmed by pathology and further indicated the presence of lymphovascular and perineural invasion of one lymph node out of 12 on the left side. 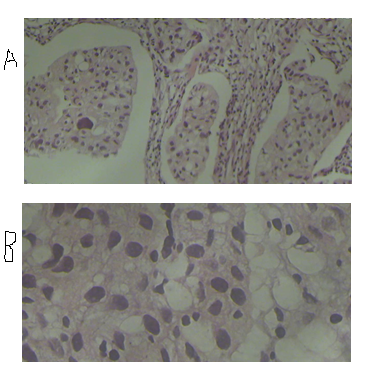 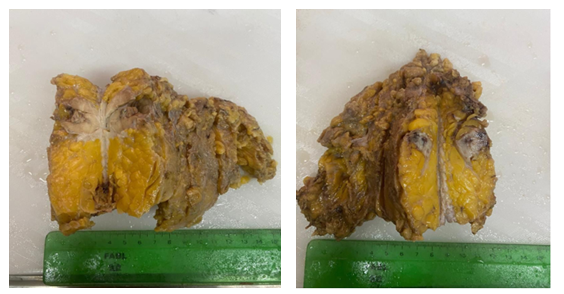 The misdiagnosis of breast cancer in men is very common, and they are often misdiagnosed as having gynecomastia (typically central in location). Some of the other less common differentials include sebaceous cysts, oil cysts, lipomas, hematomas, and lymphomas.

Surgical mastectomy was performed bilaterally, and the masses were removed with clear margins. The patient underwent chemotherapy one month after surgery and is now being managed with adjuvant tamoxifen therapy

Breast cancer in men is known to be very rare, accounting for less than 1% of all breast cancers and less than 1% of all male malignancies in general [3]. Due to the low incidence and lack of awareness among the general population, most cases of male breast cancers are diagnosed at advanced stages. Breast cancer is also not routinely screened for in men. Breast cancer prognosis is directly associated with the stage in which the cancer is first diagnosed. Although available data regarding breast cancer in men are not as extensive as breast cancer in women, data suggest that an increase in the estrogen to testosterone ratio (Klinefelter syndrome, obesity, cryptorchidism, cirrhosis) can increase the risk of breast cancer in men. The mean age at which most men with breast cancer are diagnosed is 67 years old [4]. Family history also plays an important role in increasing the risk of breast cancer, especially in men with a family history of breast cancer in a first-degree female relative (sister), as is described in this case [5]. The risk of breast cancer in men increases with mutations in the BRCA1/2 gene. According to a population-based study performed in Italy, pathogenic BRCA1 and BRCA2 variants account for nearly 2% and 13% of all breast cancers in men, respectively [6]. Based on the National Comprehensive Cancer Network guidelines, breast cancer in men is a factor that requires further investigation into hereditary breast or ovarian cancer syndrome in diagnosed patients [4]. Thus, physicians need to take a thorough history, encompassing all pertinent information, to make an accurate diagnosis. Another risk factor present in this case is age; the incidence of breast cancer increases with age. Breast cancer cases are often confused for gynecomastia (especially the nodular type), which delays treatment. According to a study by the NYU School of Medicine, gynecomastia is prevalent and can be found in 40-55% of male autopsies [7]. Gynecomastia has a trimodal distribution: neonatal, pubertal, and geriatric. Gynecomastia is a clinical diagnosis. A physical exam is used further to differentiate gynecomastia from other differentials, notably breast cancer. Mammography is used when a physical exam is not definitive (Flowchart 1). Less than 1% of all male breast cancers are bilateral, as seen in this case. Breast cancer generally presents with a fixed subareolar mass, possible skin dimpling, and potential ulceration. Our patient did not exhibit any of the common breast cancer symptoms, aside from the subareolar mass. There are theories that breast carcinoma in men tends to form eccentrically, whereas the locus of gynecomastia (the nodular type) tends to form centrally. According to Oulmet-oliva et al. the eccentric location of lesions can be identified during physical exam to differentiate between breast cancer and gynecomastia [8]. A similar case was presented by Lambley et al., in which an 84-year-old man diagnosed with bilateral infiltrating ductal carcinoma underwent bilateral mastectomy along with axillary dissection. In their case, the patient had declined radiotherapy despite recommendations but was followed through adjuvant therapy with tamoxifen. In the Lambley case, it was noted that the patient continued to be disease-free one year postsurgery [9]. Another similar case was presented by Lehrberg et al, in which a 52-year-old man diagnosed with bilateral invasive ductal carcinoma underwent bilateral simple mastectomy with lymph node biopsy. In this case, adjuvant chemotherapy and pharmacotherapy with tamoxifen were recommended for five years in addition to surgical intervention [10]. In both cases, the importance of family history was emphasized through breast cancer history in a first- or second-degree family member. Breast cancer in men requires a multidisciplinary approach to enhance the effectiveness of treatment. Mastectomy has been the primary approach to breast cancer treatment due to the central location of most tumors’. According to Surveillance, Epidemiology, and End Results (SEER), adjuvant radiotherapy has benefitted patients with lymph node involvement and thus is recommended [4]. Chemotherapy and biological therapy (tamoxifen) are indicated for patients with locally advanced tumors, high-grade tumors, or lymph node involvement, as presented in this case. 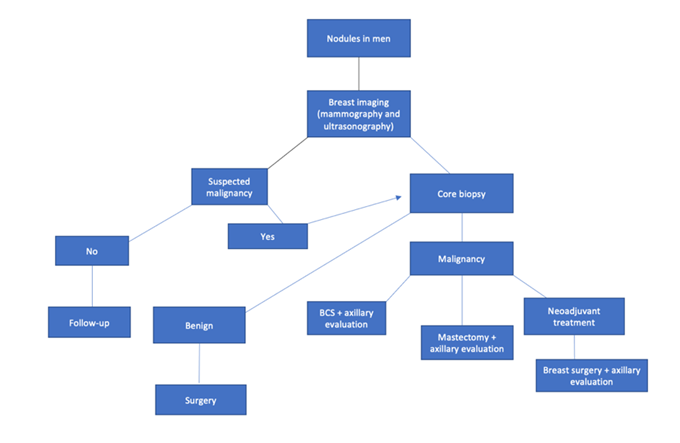 -The rarity of male breast cancer limits the available screening and management guidelines for patients at high risk.

-It is very important for physicians to take a thorough medical history and conduct a proper physical exam to differentiate between suspected breast cancer and gynecomastia.

-A multidisciplinary approach is required to enhance the effectiveness of treatment.

All procedures performed in studies involving human participants were in accordance with the ethical standards of the institutional and/or national research committee and with the 1964 Helsinki declaration and its later amendments or comparable ethical standards.

Informed consent was obtained from all individual participants included in the study.

Consent for publication was obtained from all individual participants included in the study.