Budd-Chiari Syndrome as A Manifestation of Right Atrium Myxoma

1Department of Gastroenterology and Hepatology, University Clinic Hospital of Kosova, Republic of Kosovo

Budd-Chiari syndrome (BCS) is a rare condition marked by a number of symptoms due to hepatic venous obstruction. A 40-year-old female patient presented with abdominal pain, distension, and dyspnea. An abdominal ultrasonogram showed hepatomegaly, splenomegaly and ascites. A hypodense mass obstructed hepatic flow suggested thrombus formation in the hepatic and portal veins and suprahepatic part of the inferior vena cava on computed tomography. Transthoracic echocardiography was performed to assess thrombus extension to inferior vena cava and underlying pathological processes. It showed a mass lesion in the right atrium near intra atrial septum about 4 × 3 cm in diameter. The lesion manifested as an intracardiac thrombus extending from the inferior vena cava. After the successful surgical removal, the diagnosis of the mass was confirmed as atrial myxoma by histopathological examinations. We conclude that right atrial myxoma is a rare cause of Budd-Chiari syndrome.

Any obstruction in the venous vasculature of the liver has been referred to as Budd-Chiari syndrome, from the hepatic venules to the right atrium. This leads to increased hepatic sinusoidal pressure and pressure in the portal vein so that blood flow stagnates. Thus, increased portal pressure causes increased filtration of vascular fluid with the formation of ascites and the development of collaterals through alternating veins leading to esophageal, gastric, and rectal varices. Several factors predispose to the development of Budd-Chiari syndrome, including hypercoagulable, inherited, and acquired conditions, as well as a variety of other causes, can be identified in approximately 75% of patients. Intracardiac tumors have rarely been reported as a predisposing cause for the development of Budd-Chiari syndrome, and surgical removal of these tumors is generally a curative treatment for this syndrome [1, 3-6].

Herein, our authors present a case of a 40-year-old female patient with Budd-Chiari syndrome in whom the right atrium myxoma was manifested with worsening of clinical symptoms despite medical treatment therapy.

On presentation, the patient was female, aged 40 years old. Her primary complaints included abdominal distention surrounding the epigastrium, tiredness, and malaise for around one month, worsening for the last week. The patient reports that after meals, she has abdominal distention and pain in the epigastrium. The pain was rated as 6 on a visual analog scale (VAS) of 1 to 10 and lasted around 1 hour and accompanied by malaise. After the symptoms become unbearable, she seeks medical attention in a nearby private clinic. After an ultrasound examination, hepatosplenomegaly and ascites were identified. She is referred to the Gastroenterology and Hepatology Department of the University Clinic Center of Kosovo for further evaluation and treatment. She denies previous diseases and hospitalizations. She live with her husband and four children. Do not consume tobacco nor alcohol, or any other psychoactive substances.

On physical examination, patient was oriented to time, space, and surrounding people. Physical constitution revealed a normal-appearing female, well-hydrated skin, and superficial mucosa were slightly icteric and normal body temperature. Regional lymph nodes were not palpated. Her pulse rate was 105/min and blood pressure 120/80 mmHg. The respiratory examination was normal. However, on cardiac auscultation, a mid-diastolic click was heard. The abdomen was slightly distended, and weak bowel sounds were heard. On abdominal palpation the liver was palpated 4 cm below the right subcostal arch in the mid-clavicular line. Spleen was also palpated 1 cm below the left subcostal arch. 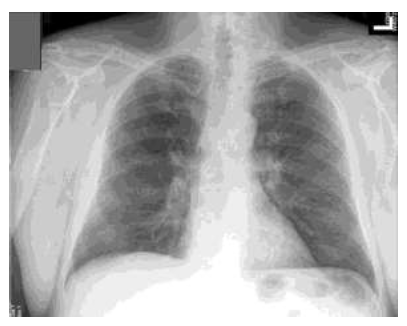 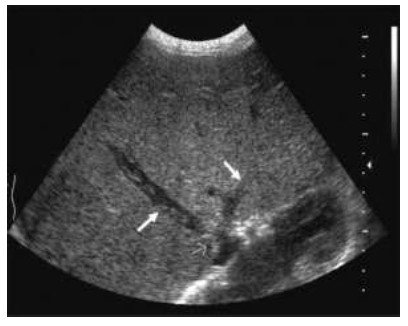 CT with contrast revealed hepatosplenomegaly and additional findings clarifying the pathogenesis of ascites. A hypodense mass obstructed the hepatic flow suggesting a thrombotic process in the hepatic veins, portal vein (PV), and the suprahepatic part of inferior vena cava (IVC). 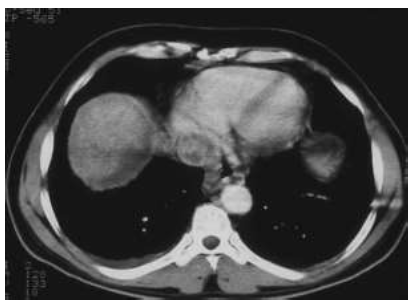 Gastroscopic examination revealed esophageal varices grade I-II. While undergoing examinations, the patient experiences an episode of thrombophlebitis in the veins of the left lower extremity. In consultation with the vascular surgeon, Fraxiparine 0.3 ml was initiated with clinical improvement within a week. Transthoracic echocardiography was performed to evaluate the extended lesion in the inferior vena cava (IVC) and its relation with cardiac structures. A massive lesion was found in the right atrium, 4 × 3 cm in diameter near the atrial wall. The lesion obstructed the venous flow in the right atrium from the inferior vena cava and limited the diastolic fill of the right ventricle. There was no stenosis nor tricuspid insufficiency. A diagnosis of right atrial myxoma was made.

The patient was released from the clinic with the recommendation to be treated in a more specialized center outside the country. Two months later, the patient returns from the Hospital of Bologna in Italy with a histopathologic diagnosis of right atrial myxoma. Due to the patient's clinical deterioration, she dies 10 months later.

Budd-Chiari syndrome is a rare clinical disorder characterized by an obstruction of the hepatic venous outlet at any level between the small hepatic venules and the junction of the inferior vena cava, up to the right atrium. This condition results in hepatic congestion, fibrosis, and eventually cirrhosis with portal hypertension. The most common risk factors are hypercoagulable conditions associated with polycythemia vera, myeloproliferative disorders, antiphospholipid syndrome, nocturnal paroxysmal hemoglobinuria, and defects in the coagulation cascade such as deficiency of protein C, S, or C protein.

Most cases of Budd-Chiari syndrome are caused by hepatic vein thrombosis or mechanical obstruction of the venous outlet. The pathological process may be primary when the obstruction of the hepatic venous flow results from a venous endoluminal lesion (thrombosis or congenital disorders) or secondary when the cause of the obstruction is an uncharacteristic external compression by an abscess, cyst, benign or malignant tumor [6-8]. Tumors can cause hepatic venous obstruction by direct invasion or external occlusion. In particular, cardiac tumors are rarely associated with the development of Budd-Chiari syndrome [1, 4]. The clinical presentation of Budd-Chiari syndrome depends on the expansion and rate of venous occlusion, as well as the development of collateral circulation that decompresses the hepatic veins. The syndrome can present as acute, subacute, or chronic. Abdominal pain, hepatomegaly, and ascites are present in almost all patients with BCS. Acute clinical symptoms most commonly include hepatomegaly, pain in the right hypochondrium, nausea, vomiting, jaundice, and ascites [6, 8].

Chronic Budd-Chiari syndrome has been characterized by a history of vague complaints for about six months. Patients may present with complications of cirrhosis and portal hypertension. Laboratory studies generally show findings of chronic liver disease. In our patient, the chronic form was not evident, as it was not presented before the onset of acute symptoms. The patient was in stable condition under medical treatment. However, enlargement of the right atrium myxoma, with narrow localization in the right atrium wall, has caused worsening of the clinical symptoms of chronic BCS. Diagnosis of BCS is based on a combination of clinical and imaging features. The diagnosis of Budd-Chiari syndrome is most commonly diagnosed using noninvasive imaging modalities. Ultrasonographic assessment of the liver and its vasculature is helpful for diagnosis. Doppler ultrasound can detect the localization of obstructions, areas of stenosis, collateral veins, and their proximal dilation may suggest BCS. The diagnostic accuracy of these methods increases if an altered hepatic flow is demonstrated or if the venous flow is absent [9, 10]. Computed tomography is also a widely performed imaging test in the assessment of hepatic veins and liver. A Hypodense filling defects in the lumen of the inferior vena cava and hepatic veins on CT postcontrast images are considered very specific for the diagnosis of thrombosis. Other diagnostic findings include non-visualization of the hepatic vein or inferior vena cava and changes in hepatic parenchyma [4, 11, 12].

In our case, the tumor exacerbated the clinical symptoms of Budd-Chiari syndrome and the underlying pathological process in the suprahepatic veins. Although atrial myxoma can rarely cause systemic thrombosis, we can conclude that splenic and portal vein thrombosis are associated with predisposing factors. Echocardiography is a beneficial diagnostic imaging modality that can show valvular stenosis or tumor prolapse through the atrioventricular valves. Magnetic resonance imaging and CT imaging are also helpful, allowing mediastinum evaluation and intrathoracic enlargement of the disease process [3, 18]. Magnetic resonance imaging (MRI) is very sensitive in detecting thrombi, which can both visualize the clot and the sequelae. In mediastinal MR imaging, the atrial myxoma is usually a heterogeneous structure with necrotic areas within the tumor. In our case, we did not perform a mediastinal MRI since the patient chose to leave the hospital.