The ten-year-old girl was admitted into our ward of the Second Hospital of Dalian Medical University due to fever 9 days with rashes 3 days. Because of low fever with cervical lymph nodes enlargement, she was infused cefathiamidine for 6 days in the local hospital, but the effect was not satisfactory. Three days later, the illness was aggravating, the girl had a high fever with skin rashes, which was distributed in the face, trunk and limbs with itch. She had no history of special drug or food allergies. T 39.4?, P 98 /min, R 25/min, Bp118/72 mmhg, BW: 47kg. She had purple skin rashes all over her body with itch, mainly on face and trunk. There were bilsters on oral lips and jaw. The conjunctiva of both her eyes were congested without secretions, and she had enlarged right cervical lymph node of size 2 × 2 cm2, which were tough, not painful. She had no positive signs of heart, lung and abdomen. Blood routine test: WBC 4.88 × 109/L, N 38%, L 52%, E 1%, Hb 127g/L, PLT 162 × 109/L, CRP 2.48 mg/L; Liver biochemistry: ALT 85.92 U/L, AST 64.79U/L, LDH 519.92U/L; Inflammatory factors: IL-2R 1348 U/ml, IL-6 7.37 u /ml, IL-10 25.20pg/ml, TNF-α 22.60 pg/ml; Etiology examination: EB-IgM (+). She was diagnosed with TNE and the skin rashes quickly spread to the whole body, congestive rashes appeared at first (Figure 1A), later evolved into the purple spotted, part of rashes appeared to form blisters and exudations. She was given a intravenous infusion of methylprednisolone (30 mg Q12h 5 days, 20 mg Q12h 3 days, 15 mg Q12h 3 days, 10 mg Q12h. 3 days), combined with IGIV (15 g/d, 3 days) in order to inhibit inflammation reaction. Simultaneously the girl had a symptomatic and supportive treatment. On the second day of treatment, the fever subsided, rashes and itching were alleviated, and the body condition was improved. Some blisters were found on the part of pigmentation after rashes faded. The blisters gradually dried up, scabbed and broke their molt (Figure 1B). After intravenous infusion of methylprednisolone for 14 days, the girl was given methylprednisolone oral treatment (20mg/d) for 3 days, the rashes were fade away except hands and feet (Figure 1C), and the inflammatory factor levels were return to normal. The patient was discharged from hospital. During outpatient visits, methylprednisolone was gradually decreased and stopped within 2 weeks, and the rashes did not recur (Figure 1D). 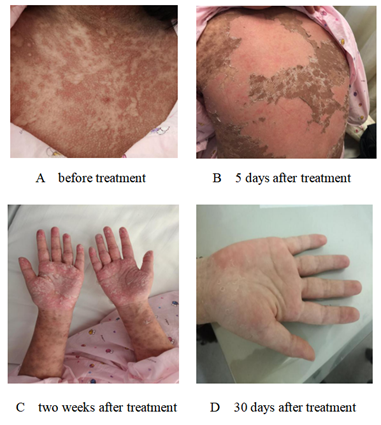 Figure 1A-1D: The rashes change before and after treatment.

There are various kinds of drugs causing TEN. Some studies have shown that the main drugs causing TEN are antibiotics, among which cephalosporins are the most [3]. Other studies reported that the main drugs causing TEN were carbamazepine, allopurinol, etc. [4]. Our patient was given cefathiamidine infusion for 6 days, three days later, the patient had a high fever with itchy rashes, which quickly spread to the whole body, small rice-sized blisters gradually appeared in the pigmentation area after the rash faded. Blisters first appeared in the neck, then face, limbs, and finally palm, arch. Therefore, we diagnosed the girl suffered from TEN induced by cefathiamidine.

At present, the pathogenesis of TEN is not completely clear. The results of clinical and histopathological studies suggest that TEN is a specific hypersensitive immune response induced by drugs. Cytotoxic T lymphocyte is the main effector cells, cytotoxic proteins such as cell membrane receptor molecules Fas and its ligand Fasl, perforin and cytokine TNF-α play an important role [5-6]. Our patient had a high levels of IL-2R, IL-6, IL-10 and TNF-α, which supported above studies.

Typical early manifestations of TEN are fever, itchy or painful skin rashes, macules mostly appear in the face, and occasionally appear in the palm and plantar, with dark red center and red margin, presenting atypical target change and positive Nikolsdy sign. Macules rapidly form vesicles and gradually expand and fuse into giant relaxant bullae, ultimately epidermal peels and appears necrosis [7]. At present, the treatment of TEN includes stopping to use sensitizing drugs, symptomatic support, and the early treatment of sufficient amount of gamma globulin combined with glucocorticoid [8], which can rapidly improve the patient's condition, reduce the mortality, and achieve a good therapeutic effect.

In conclusion, TEN in children is rare and severely, glucocorticoid with gamma globulin therapy as early as possible to help control the condition, improve the prognosis.