Cerebral Air Embolism: A Non-Thrombotic Cause of Acute Stroke

Background: Embolic strokes are due to occlusion of brain arteries mainly by clots, less frequently by non-thrombotic material. Cerebral air embolism (CAE) may occur as complication of medical procedures, although non-iatrogenic sources have been reported. It is a life-threating emergency with poor prognosis both in terms of mortality and disability. Hyperbaric oxygen therapy (HOT) is the gold standard treatment.

Conclusions: Physicians involved in acute stroke management should be aware of CAE and promptly recognize it, especially for in-hospital strokes, and manage this condition together with anesthetists and hyperbaric physicians.

Embolic strokes are most commonly due to thrombi consisting in red blood cells, platelets and fibrin. However, emboli may have a different composition including air, fat, calcium, tumor cells, infective agents or substances used in medical procedures. Cerebral air embolism (CAE) is a rare but serious complication of several procedures, such as venous catheterization, neurosurgery, open heart surgery, thoracotomy, pneumoradiologic procedures, arterial angiography and endoscopy. More rarely, CAE is due to barotrauma, cranial or thoracic trauma. The incidence is 2.65/100.000 hospitalizations/year, but it is probably underestimated since many patients are undiagnosed or unreported [1]. Once in the bloodstream, air emboli cause cerebral edema and/or infarction by mechanically blocking small vessels and also eliciting an inflammatory response that results in endothelial damage [2]. Brain lesions are multifocal, which is consistent with multiple neurological deficits and severe pictures. CAE is a life treating condition, which requires an immediate management. Hyperbaric oxygen therapy (HOT) is the gold standard treatment to be performed within the first hours [1].

We report a series of four in-hospital patients affected by CAE for whom stroke neurologists were activated for the acute management.

A 71-year-old male underwent a coronary angiography for hearth failure and myocardial hypokinesia. He had end-stage renal disease, chronic obstructive pulmonary disease and during childhood experienced pulmonary lobectomy for a cystic lesion. On admission, pneumonia was diagnosed. On day 2, after prolonged coughing and subsequent acute respiratory distress, a radial artery access was placed. Soon after, the patient suddenly became unresponsive (GCS [3]=7/15) with left deviation of head and eyes. Thirty minutes later, brain CT revealed multiple hypodensities in right temporo-occipital sulci. At CTA performed 40 minutes later vessels occlusions was not detected and the hypodensities were not visible. CAE was diagnosed. HOT was contraindicated because of pneumothorax and pneumomediastinum detected on chest CT, severe respiratory failure and the occurrence of uncontrolled clonic seizures. Death occurred 3 days later for multiple organ failure.

A 82-year-old female underwent mitral valve plastic surgery and closure of oval foramen through right minithoracotomy. Five days later, soon after CVC removal (right jugular), she became unresponsive. She was awake with right gaze deviation, aphasic, tetra-paretic, and with left hemianopia (NIHSS [4]=27/42). Echocardiogram revealed air in the right cameras. CAE was hypothesized. On brain CT performed 30 minutes later, air was found inside left frontal subarachnoid space and along the lower edge of falx cerebri (Figure 1e). No major vessels occlusion was found on CTA (Figure 1f). HOT was started 3 hours after the symptoms onset. Hyperbaric session was scheduled according to table 6 US Navy, but given to initial clinical recovery, table 5 US navy was adopted [4, 5]. At the end of treatment, she was tired, poorly collaborating, febrile and a generalized seizure occurred. Brain CT showed intracranial air reabsorption (Figure 1g). The day after, the neurological picture progressively improved. Brain CT (48 hours) and MRI (10 days) (Figure 1h) did not reveal new lesions. At discharge (11 days later) no neurological deficits were present. 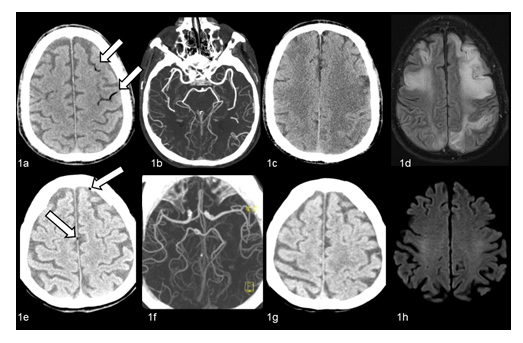 Non-thrombotic causes of embolic stroke are rare; however, the increasing availability of interventional and intravascular procedures may lead to increased incidence of these stroke types, mainly CAE. Anesthetists and physicians of intensive care units face this severe complication as a consequence of high-risk interventions (cardiovascular surgery using extracorporeal circulation or neurosurgery), but it may occur also in less intensive settings. Indeed, the vast majority of iatrogenic CAE are due to CVC manipulation [6]. Neurological sequelae or death characterize the outcome of CAE in a high percentage of cases [1, 7]. Neurologists and stroke physicians should be aware of this condition in order to promptly recognize and manage it together with anesthetists and hyperbaric physicians.

CAE diagnosis may be difficult, and a high index of suspicion is needed in the clinical setting where air may reach the cerebral vasculature [6]. The symptoms mimic acute thrombotic stroke, although they are usually more severe, with multifocal deficits, consciousness disturbance and epileptic seizures often leading to epileptic status. Prompt brain CT may support diagnosis: intracranial air can be detected within 30 minutes after symptoms onset, rarely up to 38 hours. It depends on the amount of air, bubble's size, whether venous or arterial involvement [8]. Air emboli on CT are small rounded or curvilinear hypodensities close to cortical sulci, intraparenchymal or in intracranial veins or venous sinus.

CAE can occur as venous or arterial embolism. Once air enters the venous circulation, a retrograde ascension to cerebral veins, especially in upright position, can take place, thanks to its low specific gravity with consequent venous outflow impairment [9] (probably it occurred in patient 2). Otherwise, air enters directly into the arteries (i.e., angiography) or reaches arterial circulation from the venous one through ventricular septal defect, PFO, pulmonary arteriovenous malformations or pulmonary microcirculation [10]. We did not found a PFO in patient 1, while patient 4, who had air in both right and left cameras, PFO had been closed before CAE. In both patients, air could have entered in arteries through a temporarily open or not completely closed PFO. Indeed, when large air volume enters the pulmonary arteries, it could cause air-lock leading to pulmonary hypertension and right heart strain. This increased pressure can temporarily open a PFO and allow paradoxical air embolism [5, 9]. Otherwise, air could reach arteries through pulmonary microcirculation. This may occur when the pulmonary filter is overwhelmed by a large amount of air that cannot be absorbed and may pass through the pulmonary circulation across arteriovenous shunts thus entering the left side of the heart. In this situation, intrapulmonary arteriovenous anastomoses (IPAVA) are recruited and the passage of air bubbles is allowed [11]. In patient 3 the increase in the intrapulmonary pressure due to cough may have caused rupture of the alveoli and damage of vessels wall allowing the passage of air into the bronchial veins and then in the left ventricle. Therefore, underlying pulmonary vulnerability can be considered a risk factor for CAE in non-iatrogenic situations [7, 8, 12].

Treatment of CAE includes both supportive treatment and HOT, but first the entry of air must be reduced [13]. The patient should be placed in Trendelenburg’s position with a left lateral head down tilt to prevent the movement of air into the right ventricular outflow tract and 100% oxygen should be administered to encourage resorption from the vasculature [5, 7]. Once stabilized, urgent HOT may decrease the size and effects of the emboli. HOT helps to reduce bubbles size, facilitates diffusion of oxygen in ischemic tissues and inhibits inflammation through the inhibition of neutrophil attachment to blood vessels. The outcome depends on the time to HOT. Indeed, according to some authors, HOT is associated with favorable prognosis if started within 6 hours from the symptoms onset [6]. However, the critical time interval after injury is uncertain and has been variably reported to be 3-48 hours. Hyperbaric treatments are recommended until there is improvement, generally no more than one or two, occasionally up to ten [14]. Patient 4 underwent HOT at 3 hours from symptoms onset and she was the only patient with good outcome. Although no trial or prospective studies have been conducted on CAE patients, reviews of published cases reveal better outcomes with HOT compared to no-recompression treatment. HOT is indicated in guidelines for patients with gas embolism and neurological manifestations [14, 15]. Serious adverse effects rarely occur during treatment resulting from oxygen toxicity, such as seizures, congestive heart failure exacerbation, pulmonary edema, and retinal changes.

The most serious contraindication to HOT is untreated pneumothorax, which would worsen under chamber pressure. In the Italian guidelines absolute contraindications are also a ratio between the partial pressure of oxygen and fraction of inspired oxygen (PaO2/FiO2) <200, hypertensive pneumothorax and generalized epileptic status [16]. Relative contraindications include obstructive lung disease, asymptomatic pulmonary blebs or bullae, poorly controlled seizure disorder, and congestive heart failure. However, these relative contraindications should not deter clinicians from using HOT in patients with severe neurological deficits. If CAE is suspected, hyperbaric physicians should be quickly activated in order to rapidly discover and manage contraindications and start HOT.