Morning glory syndrome (MGS) is a congenital optic disc anomaly caused by abnormal closure of the embryonic fissure. Retinal detachment is commonly associated with MGS, though the association of choroidal neovascularization (CNV) with MGS is rare. Herein, we report a case of CNV associated with MGS, which was successfully treated with a single intravitreal injection of bevacizumab. A 32-year-old Japanese woman consulted at our clinic for blurred vision in her left eye for five days. Her best-corrected decimal visual acuity (BCVA) was 1.5 (S-1.0) OS. The fundus examination revealed subretinal hemorrhage associated with MGS in the temporal margin of the optic disc. As she was pregnant, we planned to continue follow-up without further invasive testing and treatment; however, her visit to the hospital was interrupted. Ten months later, she returned with complaints of poor vision and central scotoma in her left eye for six months. The BCVA was 0.5 (S-1.0/C-1.0/45°) OS. The fundus examination showed that subretinal hemorrhage increased, and the subretinal fluid extended below the fovea. Multimodal imaging revealed type 2 CNV on the temporal and nasal disc margins. After she received an intravitreal injection of bevacizumab (1.25 mg), rapid absorption of subretinal fluid and regression of CNV were observed. The BCVA improved to 1.5 (S-0.5/C-0.75/35°) OS. No recurrence of CNV was observed for 26 months after the injection. During the follow-up of MGS cases, we should pay attention, not only to retinal detachment, but also to the occurrence of CNV around the disc margins.

Morning glory syndrome (MGS), named by Kindler in 1970, is a congenital optic disc anomaly caused by abnormal closure of the embryonic fissure [1, 2]. Systemic complications include hypertelorism, cleft lip and palate, encephalocele, agenesis of the corpus callosum, moyamoya disease, pituitary dwarfism, and urinary abnormalities [3-6]. On the other hand, ocular complications include retinal detachment, strabismus, cataracts, dysplasia of the anterior segment, and more [1, 7, 8]. Of these, retinal detachment requires special attention because it can lead to vision loss. A previous report showed that one-third of the cases developed retinal detachment during a follow-up period of 10.3 years [8]. However, choroidal neovascularization (CNV) is rarely associated with MGS. Early detection of CNV is important because active CNV can lead to subretinal fluid retention and retinal edema, which sometimes causes significant bleeding and severe vision loss. Herein, we report a case of CNV with MGS that was successfully treated with a single intravitreal injection of bevacizumab.

This study was conducted in accordance with the Declaration of Helsinki and was approved by the ethics committees of Osaka University (No. 12066, Osaka, Japan). Written informed consent was obtained from the patient (enrollment date: April 12, 2018). All data generated or analyzed during this study are included in this published article.

A 32-year-old woman consulted at our clinic for blurred vision in her left eye for five days. She had no systemic medical history. Although she was 20 weeks pregnant, she had no pregnancy-related complications, such as pregnancy-induced hypertension. There was no family history except for her sister who had Rett syndrome. During her first visit, her best-corrected decimal visual acuity (BCVA) values were 1.5 (S-0.5) OD and 1.5 (S-1.0) OS. Critical fusion frequencies were 42 Hz OD and 40 Hz OS. Anterior segments of both eyes were normal. The fundus examination of the left eye revealed subretinal hemorrhage associated with MGS in the temporal margin of the optic disc (Figure 1a). Using optical coherence tomography (OCT), subretinal hyper-reflective lesions were detected in the nasal and temporal disc margins of the left eye (Figure 1b). Visual field examinations revealed a slight enlargement of the Marriott blind spot in the left eye (Figure 1c). There was no obvious abnormality in the right eye or facial malformations, such as hypertelorism or cleft lip. As she was pregnant, we planned to continue follow-up without further invasive testing and treatment, such as fluorescent fundus imaging and anti-vascular endothelial growth factor (anti-VEGF) therapy. However, her visit to the hospital was interrupted. About 10 months later, she returned to our clinic with complaints of poor vision and central scotoma in her left eye for six months. The BCVA was 0.5 (S-1.0/C-1.0/45°) OS. The fundus examination of the left eye revealed increased subretinal hemorrhage, and the subretinal fluid extended below the fovea (Figure 1 d, h). Although she was still breastfeeding, she consented to the change to baby formula, and therefore, fluorescein and indocyanine green angiography were performed. These investigations revealed type 2 CNV on the temporal and nasal margins of the optic disc in the left eye (Figure 1 e-g). Blood flow signals were detected in the CNV lesion using OCT angiography (OCTA) (Figure 1 i, j). Visual field examinations revealed an expanded Marriott blind spot in the left eye, and I-1 isopter was not detected (Figure 1 k). 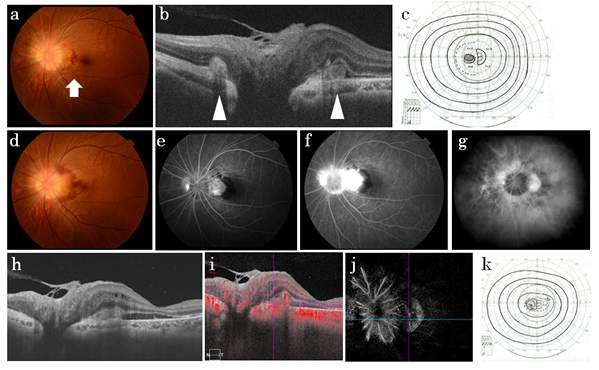 We decided to avoid magnetic resonance imaging due to the metal eyelash extensions of the patient. Instead, we performed computed tomography of the head. Cranial computed tomography revealed no anomalies such as encephalocele. After she was informed about participating in a clinical study of bevacizumab vitreous injection, she gave her written consent and received a bevacizumab 1.25 mg vitreous injection into her left eye. Three months after the injection, the BCVA improved to 1.5 (S-0.5/C-0.75/35°) OS. Absorption of subretinal fluid and regression of CNV were observed (Figure 2 a-e). CNV recurrence was not observed for 26 months after the single bevacizumab injection (Figure 2 f, g), and her BCVA was maintained without additional anti-VEGF treatment. However, on OCTA, there were still blood flow signals within the dormant CNV lesion (Figure 2 h, i). 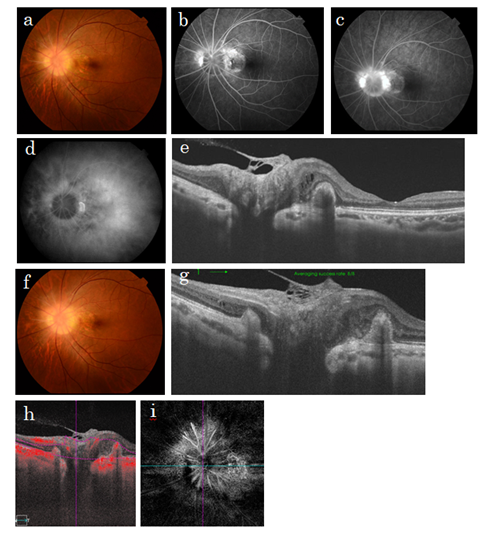 MGS is considered as a type of optic disc dysplasia, usually unilateral, and non-hereditary [1]. Although there are some related eye abnormalities, such as retinal detachment, strabismus, and cataracts, the occurrence of CNV is a rare complication associated with MGS. To the best of our knowledge, there have been eight cases of CNV associated with MGS reported in the literature (Table 1) [9-16]. There is no established treatment regimen yet [10]. According to previous reports [9-16], prior to the clinical application of anti-VEGF drugs, photocoagulation was the chosen treatment. However, various anti-VEGF drugs have been used to treat CNV secondary to MGS (Table 1). Due to the small number of reported cases, it was not possible to determine the preferred anti-VEGF drug. However, all anti-VEGF drugs seemed to be effective as one to three doses could result in remission. Furthermore, despite the short follow-up period, there were no cases of recurrence. Considering that CNV associated with MGS tends to form in the temporal margin of the optic disc, anti-VEGF drugs may still be preferred over photocoagulation, which may damage macular-optic nerve fibers. However, in our case, OCTA confirmed blood flow signals in the dormant CNVs (Figure 2 h, i). Therefore, it is necessary to continue careful follow-up during remission.

During the follow up of patients with MGS, we should pay attention, not only to retinal detachment, but also to the occurrence of CNV, especially around the disc margins. Although anti-VEGF treatment seemed effective for CNV associated with MGS, caution is required regarding CNV recurrence.

We would like to thank Editage (www. editage. com) for English language editing. No funding was received for this study.