Clinical Implications of Facial Edema in Chronic Mucormycosis: A Report of 5 Cases

Method: Retrospective study of 5 patients, (3 men, 2 female) who came to the emergency room due to facial edema and nasosinusal symptoms that were diagnosed with chronic mucormycosis, a review of database clinical file was performed to describe their disease. The study was previously reviewed and approved by the University’s Ethics and Research Committees, receiving the registration number 0T18-00003.

Results: In the 5 (100%) patients reported, we found a history of type 2 diabetes mellitus, with an average duration of facial symptoms of 3.7 months, characterized by intermittent facial edema accompanied by paresthesias, pain, and purulent rhinorrhea. In 3 (60%) patients we found necrotic lesions in middle turbinate and in 2 (40%) of them septal perforation. Mean glycemia and leukocytes at admission were 174.6 mg/dl and 7828 k/ul, respectively. The diagnosis was confirmed by histopathology with identification of hyphae compatible with the Mucoracea family.

Conclusion: Chronic mucormycosis is a rare disease, associated to immunocompromised conditions. We can conclude that in patients with a history of uncontrolled diabetes mellitus, intermittent facial edema, and nasal symptoms for more than 4 weeks, it’s justified to perform a diagnostic approach for chronic mucormycosis.

Mucormycosis belongs to a group of severe angioinvasive infections caused by filamentous fungi belonging to the order of the Mucorales of the class Zygomycetes. There are several forms of the disease, with rhinocerebral being the most common. According to the time of evolution it can be defined as acute or chronic, in the chronic form the symptoms must be present for at least 4 weeks, 5.6% of cases evolve to a chronic state, there have been 35 cases published in the literature [1, 2]. It occurs almost exclusively in immunocompromised patients, diabetes mellitus being the most related comorbidity, the damage to the microvasculature favors the progression of this disease. This fungi invades the arteries, leading to thrombosis that subsequently causes necrosis of tissues [3]. It is reported that the initial clinical features in this disease are ethmoid and maxillary sinusitis, with facial soft tissue edema and periorbital cellulitis [4]. Next, we present a series of cases with patients diagnosed with chronic mucormycosis, in which chronic facial edema was the main symptom.

Retrospective study from 2015 to 2018, approved by the ethics committee of our institution, receiving the registration number 0T18-00003. All the included patients were admitted to the emergency department due to chronic facial edema. Our group of patients consisted of 3 men and 2 women with an average age of 53 (44-67) years, all diagnosed with type 2 diabetes mellitus with an average of 5 (1-12) years of controlled evolution with oral hypoglycemic agents and insulin, and in 2 cases accompanied of systemic hypertension (Table 1). The average of symptoms was 14.8 (6 weeks - 24 weeks), all had chronic facial edema, 4 cases on the right side and one on the left, accompanied by paresthesias and facial pain, nasal obstruction and rhinorrhea was present in 4 of them. All 5 cases had generalized edema in the nasal mucosa; in 3 we found a necrotic lesion in the right middle turbinate; in 2, septal perforations in areas III and IV of the Cottle classification; and in 1, a necrotic lesion on the hard palate of 1 × 1 cm. The mean leukocytes was 7828 k/ul (5520-11.700 k/ul), and a mean pH of 7.37 (7.33-7.41). The mean range of plasma creatinine levels was of 0.86 mg/dl (Table 2). The histopathological report of all the cases showed the presence of mycotic structures with thick, non-septate hyphae with branches at right angles (Figure 1). 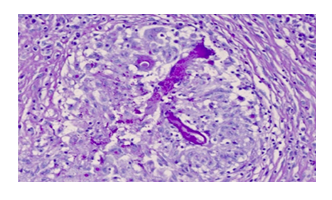 Surgery and administration of amphotericin B was performed in all our patients. Amphotericin B was administered at an initial dose of 1 mg/kg/day, the lowest total dose used was 750 mg on patient 3 whom had sepsis caused by C. difficile as a complication and died. Total dose of each patient is showed on Table 1. Patient 1 had tubulointerstitial nephritis as a complication to the use of amphotericin with complete recovery in 1 month without sequelae. In all patients necrotic tissue was removed until reaching a healthy tissue limit. Patient 1 and 2 were treated through a nasal endoscopy and Caldwell Luc approach to make an antrostomy and a resection of the middle turbinate. Patients 3, 4 and 5 underwent only a nasal endoscopy to make the antrostomy and resection of the middle turbinate. In addition, patient 3 had a partial resection of the hard palate and bilateral antrostomy, patient 4 a partial resection of the inferior turbinate and patient 5 a resection of the nasal septum. During hospitalization, patient’s glycemic level remained stable with an average of 157.6 mg / dl (114-179 mg / dl). 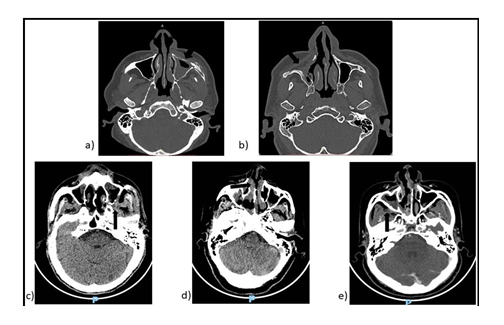 In 1964, Vignale et al. describe chronic mucormycosis for the first time, in a patient with a 24-year old history of progressive destruction of nasal tissues [5]. It is an opportunistic infection acquired most of the time by respiratory route, affecting predominantly patients with some degree of immunocompromise. Risk factors for mycosis formation can vary considerably depending on country. Studies from the United States and Greece indicate a change from diabetes mellitus to hematological malignancies as the main risk factor; french researchers describe neoplasms as the main factor and injuries as an emerging risk factor in their country [6-10]. In comparison, reports from Iran and India describe diabetes mellitus as the predominant risk factor for mucormycosis [11].

Before 1955 it was considered a serious disease with high mortality rate, however, nowadays the overall survival rate for chronic presentation is reported in 83% of patients, compared to 10% to 35% for acute presentation [1].

There is no exact definition of chronicity, it can vary from weeks to months [12]. Classically, it is defined by symptoms lasting more than 4 weeks [13, 14]. In the reported chronic cases, the average was 7 months. In comparison, acute infection occurs within 10 days of evolution [14].

The chronicity of the infection is believed to be related to the capacity of the patient's immune system, although the virility of the fungus, as well as the size and route of the inoculum, are considered equally important. Pathologically, mucormycosis manifests as granulomas, abscesses, vasculitis, or infarctions [15, 16]. Acute infections generally as fungal vasculitis and abscesses in contrast to the chronic form, manifested as a granuloma [17]. The chronic form of mucormycosis is associated with diabetes mellitus in more than 70% of the cases, which is usually compensated, without reaching a picture of ketoacidosis [18]. In our study, we found an association of the disease with type 2 diabetes mellitus in 100% of the patients and 3 (60%) of them also presented systemic hypertension. The etiological agent of this disease are filamentous fungi belonging to the Mucorales family, and among them the most common species is Rhizopus oryzae [18, 19]. In all our patients, the histopathological report showed the presence of microorganisms belonging to the Mucorales family.

Adequate function of phagocytes and polymorphonuclear cells is necessary to fight this microorganisms, therefore, hyperglycemia, acidosis and neutropenia predispose to an activation of this disease. Angioinvasion is a characteristic that leads to thrombosis and necrosis of the affected tissue. Glucose-regulated protein 78 (GRP-78), which is found in endothelial cells and is over-expressed in hyperglycemic states and high iron levels, participates in the angioinvasion feature [10, 19]. The clinical presentation of chronic mucormycosis is manifested as an indolent and destructive condition, of more than 4 weeks of evolution with nonspecific symptoms, progression and generally do not present an attack to the general state. Harril et al. describes that the ocular symptoms are the most common (proptosis, ophthalmoplegia, chemosis) present in 72% of the cases and the nasal and palatal symptoms (nasal congestion, muco-purulent rhinorrhea) are presented in 50% of cases [13]. All of our patients presented an average of 14.8 weeks of evolution. Chronic facial edema as an angular symptom occurred in 5 patients, purulent rhinorrhea and nasal obstruction in 4 cases, only one presented with ocular symptoms characterized by decreased visual acuity. Three of our patients presented necrotic lesions in the nasal cavity specifically in the right middle turbinate, one case presented a 1x1 cm on the hard palate, and two of our patients presented septal perforation in areas III and IV of the Cottle classification, these data being little reported in the literature. To suspect this disease, an adequate interrogation, a thorough physical examination, nasal endoscopy, imaging studies to assess the extent of the disease and biopsy for the definitive diagnosis are necessary [20]. Our patients were examined with nasal endoscopy and biopsy of suspicious lesions, which were evaluated by a specialist pathologist, diagnosing the presence of fungal structures of the Mucorales family. The most common radiographic changes in chronic mucormycosis are: a) diffuse mucoperiosteal thickening with paranasal sinus opacification in 91%, b) bone erosion in 35% c) orbital invasion in 26% d) facial soft tissue edema contiguous with the maxillary in 22% [20, 21].  In our study, the CT demonstrated mucoperiosteal thickening in 100% of the patients, bone erosion in 40%, septal perforation in 40% and malar region (cheek) edema in 100% of the cases. The histopathological study is characteristic to find thick non-septate hyphae with right angle branches, shown in Image 1. The treatment must be combined. Conservative resection of affected sites should be performed by nasal endoscopy and/or external approach, as well as administration of amphotericin B, or its liposomal variant at a dose of 1-2 mg / kg / day. All our patients were treated with Amphotericin B as well as surgery, based on previous studies that show that in patients with dual therapy with surgical debridement and amphotericin B, the survival rate increases to 91% [12, 19].  Only one of our patients presented tubulointerstitial nephritis as a complication to the use of Amphotericin B which was resolved within 1 month without renal sequels. Another one presented the rhino-orbito-cerebral form dying from bacterial septicemia. Washburn et al. recommends follow-up with imaging studies every 3-4 months and revisions every 2-3 months with nasal endoscopy to rule out recurrent disease [22]. Of our patients, 4 received follow-up for at least one year without recurrence of the disease.

Chronic mucormycosis is a rare disease, of the spectrum of invasive fungal infections that requires a high index of suspicion due to atypical presentations. It presents with atypical, sometimes indolent symptoms, resembling a common rhinosinusitis. We recommend that in patients with some degree of immunocompromise presenting with chronic facial edema accompanied by nasosinusal symptoms for more than 4 weeks without improvement, an adequate physical examination including nasal endoscopy should be performed, suspecting mucormycosis. An imaging study to assess the extent of the condition and taking a biopsy to corroborate the suspicion, and initiating treatment immediately, reduces the number of complications, days of hospitalization, and costs. Because it is an unusual pathology, more research is needed to understand its behavior.

We thank Raúl H. González González, MD, for his help in making this research paper.

Each named author has substantially contributed to conducting the underlying research and drafting this manuscript. Additionally, to the best of our knowledge, the named authors have no conflict of interest, financial or otherwise. Our research is self-funded.