#Authors contributed equally to this work

Glanzmann Thrombasthenia is a rare platelet function disorder which is characterized by decreased expression and/or dysfunction of the platelet receptor αIIbβ3 (GPIIb/IIIa). The disease is due to alterations in ITGA2B or ITGB3 the genes encoding for the receptor subunits αIIb (GPIIb) and β3 (GPIIIa) and mostly inherited autosomal recessively. We report about a one-year old girl presenting with petechiae and hematomas shortly after birth. Platelet light transmission aggregometry was impaired after stimulation with ADP, arachidonic acid and collagen. Stimulation with ristocetin reached normal values, but showed an undulating course. Flow cytometry revealed severely decreased expression of CD41 (αIIbβ3). Molecular genetic analysis of the candidate genes and family genotyping identified two compound heterozygous variants in Exon 10 of ITGB3: c.1552C>T (p.Gln518*) and c.1639T>G (p.Cys547Gly). According to the guidelines of ACMG the variants were classified as pathogenic (Class 5). The nonsense variant c.1552C>T has not been reported before.

Glanzmann Thrombasthenia (GT) is a well characterized platelet disease with mostly autosomal recessive inheritance (OMIM #273800). The key feature of GT is severely impaired or absent platelet aggregation in response to multiple platelet agonists except for ristocetin and a reduction/absence of integrin αIIbβ3 surface expression or dysfunction of the receptor [1]. The integrin αIIbβ3 is the main platelet fibrinogen receptor and consists of 2 subunits: αIIb (ITGA2B; 30 exons) and β3 (ITGB3; 15 exons). The encoding genes are less than 200 kb apart on chromosome 17q21 [2-4]. There are three classical types of GT. In type I, αIIbβ3 expression is very low (<5%), whereas in GT type II αIIbβ3 expression is slightly reduced (5-20%) and in variant-type GT αIIbβ3 is dysfunctional and may be due to a defect in genes involved in integrin activation [1, 5, 6]. The subunits of αIIb and β3 consolidate as a non-covalent heterodimer [7]. The subunit αIIb has four major extracellular domains known as β-propeller, thigh, calf-1 and calf-2. The subunit β3 comprises of 8 domains: four EGF (epidermal growth factor) domains, the domains bI, hybrid, PSI (plexin/semaphoring/integrin) and the β-tail [8-14]. Variants causing GT can affect biosynthesis as well as structure and function of αIIbβ3 complex [15]. To date the public version of Human Genome Mutation Database (HGMD) comprises 204 pathogenic variants in ITGA2B and 149 in ITGB3 [access 06/2020]. Affected patients are suffering from moderate to severe hemorrhagic syndrome. Symptoms can appear rapidly after birth including gastrointestinal bleeding, petechiae, hematomas and mucocutaneous bleeding (i.e. epistaxis) [16]. There are several other defects in the primary hemostasis which may present with similar symptoms (i.e. other platelet receptor defects). Therefore, comprehensive diagnostics are important to identify the cause of bleeding diathesis.

Here, we report compound heterozygous pathogenic variants in ITGB3 causing Glanzmann disease, to our knowledge one of them is novel and has not been reported before.

The index patient is a one-year old Caucasian girl presenting with petechiae and hematomas distributed over the whole body already several hours postpartum. The girl also experienced postnatal cytomegalic virus infection and has two small muscular ventricular septal (VSD) defects, which are not relevant considering hemodynamics. After the baby started crawling even larger hematomas developed. Dentition caused prolonged bleeding for a day and was stopped using tranexamic acid. Sometimes mild bleeding symptoms were observed after scratching. Post-puncture bleeding symptoms occurred for 2 hours after blood sampling. Blood analyses revealed that the platelet count was increased (502 G/l). Normal values were found for red and white blood cell count and blood smear. Global coagulation tests (aPTT, INR) and von Willebrand parameters were normal. The girl is the first child of non-consanguine parents. The mother is easily prone to hematomas after insignificant trauma. During delivery the mother suffered major blood loss due to placenta accreta and received two red blood cell concentrates. There was no bleeding during and after a nose operation. No bleeding diathesis is reported for the father.

Written Informed consent was given for all family members. Genomic DNA from EDTA blood was isolated using QIAamp® DNA Blood Mini Kit (Qiagen, Hilden, Germany). For the index patient all exons of the genes ITGA2B and ITGB3 were amplified by PCR with intronic primers. The purification products were sequenced directly. Analysis was performed by sequence assembly and alignment software Codon Code® Aligner and variant analyzing software Alamut® visual. Variants were classified according to the guidelines of the ACMG (American College of Medical Genetics and Genomics). Family genotyping was done for the two pathogenic variants in ITGB3.

The second heterozygous variant c.1639T>G leads to an exchange of the highly conserved (up to C. elegans) cysteine at position 547 by the physiochemical different glycine (p.Cys547Gly; position without signal peptide: Cys521Gly). This non-synonymous coding variant is found in dbSNP as a not validated entry (rs902952044) and in gnomAD with low allele frequency of 0.0032% (amount of counted allele frequencies: 1/ amount of all alleles: 30984). The variant is listed in HGMD public version. In silico prediction is concordant pathogenic in PolyPhen2, Mutation Taster and SIFT. Family genotyping of Exon 10 identified heterozygous c.1639T>G (p.Cys547Gly) as paternal variant, whereas, c.1552C>T (p.Gln518*) was found maternally. Family genotyping confirmed compound heterozygosity in index patient (Figure 2). 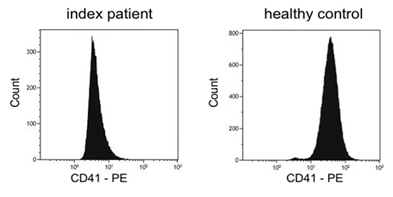 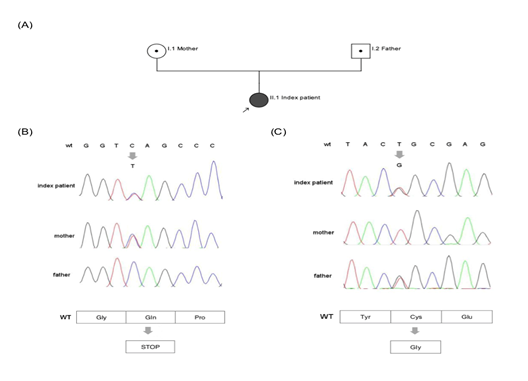 Table 2: Characteristics of the two variants identified in ITGB3 (NM_000212).

In this study we describe the early onset of Glanzmann Thrombasthenia due to compound heterozygous variants in exon 10 of ITGB3. To our knowledge the nonsense variant has not been reported so far. The nonsense variant c.1552C>T (p.Gln518*) interrupts the reading frame by a premature Stop codon (normal protein length 788 aa). The mRNA produced might be a target for nonsense mediated decay. Due to loss of protein function we classified the variant as pathogenic (Class 5). The second allele carries a heterozygous non-synonymous coding variant c.1639T>G, (p.Cys547Gly). In silico prediction was concordant pathogenic in 3 programs. According to UniProt (https://www.uniprot.org/) the cysteines at position 547 and 534 form a disulfide bond. The amino acid exchange from cysteine to glycine is likely causing substantial impairment of the tertiary structure due to the loss of the disulfide bond (534-547). The importance of cysteine at position p.547 is supported by the described variant c.1641C>G resulting in exchange from cysteine to Tryptophan (p.Cys547Trp) in a Glanzmann Thrombasthenia patient [18]. Kannan et al. used molecular modeling and showed that Cys547 is located in the EGF-3 domain of β3, which has intense contact with the calf-1 domain of αIIb. They presumed that the loss of Cys547 may cause conformational changes which lead to retention of the aberrant αIIbβ3 complex [18]. Furthermore, in HEK293 cells expressing the Cys547Gly variant a profound reduction in β3 expression was found [19]. Buitrago and colleagues anticipated that Cys547Gly would decrease receptor expression due to the loss of the disulfide bonding. According to these findings we classified the variant as Class 5 (pathogenic).

Biochemical and molecular genetic analysis led to early diagnosis for this patient with Glanzmann Thrombasthenia. Early diagnosis helped to treat bleeding symptoms more effective and improves surgical management. Identifying the disease-causing variants led to a better understanding of molecular genetic mechanisms affecting the αIIbβ3 integrin receptor. In addition, the results will help regarding the genetic counseling for the parents.

We have no conflict of interest to report.