Introduction: We present a case of a concealed intradural lumbar disc herniation following a previous discectomy with adhesions of the ventral dura to the posterior longitudinal ligament.

Case Presentation: A 40-year-old Asian male with a lumbar discectomy 2 years ago presented to our emergency department with over the last few days rapidly progressing neurological symptoms of the lower limbs. The patient was admitted and MRI was performed on an emergency basis. Due to severe pain, and as a result the patient inability to lie down to complete the MRI examination, the MRI scan was incomplete. However, it showed an occupying mass at the level L4/5 with suspected recurrent disc herniation. Intraoperative only a small herniation was found. A new MRI, performed shortly after the 1st surgery, revealed an intradural herniation that could be addressed by microscopic durotomy and sequestrectomy. Because of persisting weakness and pain a new MRI scan was done and revealed a recurrent intradural hernia proximal to the durotomy. Revision surgery was indicated and performed successfully. The 6 months follow-up MRI scan revealed no signs of recurrence. The clinical examination, 6 months postoperatively, showed almost complete remission of the preoperative weakness and pain with restoration of the walking ability.

Discussion: Most literature addressing the pathophysiology of intradural lumbar disc herniation are cadaveric studies. Currently only few case reports or series discuss this pathology. Different theories including ‘mechanical compression’ and ‘adhesions’ theories have been discussed. A solid proof couldn’t be provided. Our patient had a previous discectomy at the same segment two years ago. The MRI scans could clearly show scar tissue on this level with a direct connection of the lumbar disc to the intradural compartment. We believe that extradural adhesions provided an access, through which disc fragments could migrate intradurally.

Intradural disc is a rare presentation of intervertebral disc herniation with an incidence of 0.26% - 30% of all herniated discs [1]. Most of the reported cases presented in the lumbar spine at the segment L4/5 [2]. Most of the cases had a history of a previous spinal surgery or a trauma with traumatic disc rupture [3, 4]. However few cases with no previous surgery or history of trauma have been reported [1]. Adhesions between the Dura and the posterior longitudinal ligament with development of a track between the intervertebral disc and the Dura, allowing intradural migration of herniated disc fragments, is the most suggested theory explaining this pathology [5]. Progressive neurological deficit with sudden deterioration in the motor power of the lower extremities is seen in most of the cases [1, 6]. MRI is the gold standard imaging study for diagnosis and follow-up, although many of the described MRI-signs and findings are non-specific and may not be seen in many cases [7, 8]. Therefore, the diagnosis of an intradural disc herniation remains challenging and a high degree of clinical suspicion is needed.

We are presenting a case of intradural disc herniation with early postoperative recurrence.

A 40-year-old Asian male presented acutely in our emergency department with a 3-day history of lumbar pain with a pseudo-radicular radiation in his left lower extremity; at the dorsal aspect of the thigh. Oral painkillers including opioids did not produce significant pain relief. Subjective motor weakness of the right foot that has developed over the past 3 days, and inability to walk has been reported. His complaint had an acute onset. Two years ago, the patient had a disc herniation at the level of L4/5 with subacute motor weakness in L4 and L5 myotomes of his left lower extremity. Upon that a L4/5 discectomy had then been performed. Since then exists a rest- motor weakness of his left foot. Also, since then exists a hypoesthesia of the left foot dorsum and the lateral aspect of the leg. New sensory disturbances, bladder and bowel disturbances have been denied. There was no history of trauma in the past few weeks. Otherwise, the patient’s past medical history was insignificant without any diseases. The patient took no regular medications, other than the painkillers. He had no known allergies.

On admission clinical examination revealed motor weakness with power 4/5 in L4 myotom on the left side (preexisting) and 2/5 in L5 myotom bilaterally (preexisting on the left side, acutely present since 3 days on the right side). Other than that, he had a preexisting hypoesthesia at the lateral aspect of the left leg. His Lasègue sign was bilaterally positive. The patellar and the Achilles tendon reflexes were bilaterally intact. The perianal sensitivity and the sphincter muscle tone were regular.

A recurrent disc herniation at the previously operated level (L4/5) was suspected. The patient has been admitted for further investigations and treatment. Upon admission an MRI of the lumbar spine was planned on the same day. Unfortunately, the examination could not be tolerated by the patient due to pain and was aborted. Few sagittal slices could be reconstructed. These showed an occupying mass at the level L4/5 that has been interpreted as a massive disc herniation (Figure 1). Over this short period of time until the MRI was done, the neurological symptoms of the patient have worsened with the development of saddle anesthesia and beginning cauda equine syndrome. Emergency surgery, discectomy L4/5, has been indicated and performed on the same day. Intraoperative, only a small disc herniation that did not correlate with the size of the mass seen on the taken MRI sagittal slides has been found; this has been removed. Postoperatively, the patient developed progressive weakness of his lower extremities bilaterally; so that 1 day later he had a bilateral complete foot drop with a motor weakness 0/5 in L4 myotoms and 1/5 in L5 and S1 myotoms bilaterally. MRI lumbar spine has been repeated, on emergency basis, under heavy intravenous analgesics. This showed an intradural mass (Figure 2). An emergency revision surgery has been indicated and performed on the same day. Over a durotomy, a massive intradural disc hernia measuring 6 cm × 1 cm could be removed. Following the revision surgery, the bilateral L5 myotom weakness with bilateral gluteal insufficiency did not show any recovery although there was a significant reduction in pain. Mobility was still extremely difficult. 5 days later a follow-up MRI of the lumbar spine has been performed. A recurrent intradural disc herniation at the level L2/3 was identified. Another revision surgery, with durotomy and discectomy of the new hernia, has been indicated and has been performed 2 days later. A disc fragment measuring 4 cm × 1 cm could be removed.

6 weeks postoperatively the patient presented to our outpatient clinic for routine follow-up. The patient reported a subjective improvement in the motor function of the legs, whereby the patient was now able to walk on crutches. On physical examination the motor power of the lower extremities was nearly the same as per discharge. The patient was advised to do further intensive physiotherapy and electrostimulation.

Another follow-up appointment, 3 months after surgery, has been arranged and the patient presented to our outpatient clinic. He complained about increasing leg pain on the right side over the past few weeks. The sensation and motor function were identical as per discharge. Oral painkillers were prescribed and a follow-up MRI, to exclude any recurrent or new pathology, has been arranged. The patient presented to us 4 weeks later for follow-up and to discuss the MRI findings. Recurrent and new, intra- or extradural, disc herniation could be excluded; few degenerative changes as spondylarthosis and osteochndrosis could be seen, but no signs of nerve root compression could be identified (Figure 3). The patient was encouraged to continue on oral painkillers and to do further physiotherapy. An outpatient visit to a neurologist has also been recommended.

The patient presented to us 6 months later for routine follow-up. Under oral analgesics there was a remarkable regression of the leg pain. On physical examination there was nearly a complete remission of the preoperative weakness, with a residual weakness of 4/5 in L4 myotom (dorsiflexion of the foot) and of 3/5 in L5 myotom (dorsiflexion of the big toe) bilaterally; and a residual hypoesthesia at the lateral aspect of the left leg. The patient could walk freely without the need for walking aids. Another follow-up examination in our outpatient clinic 1 year postoperatively, was recommended. 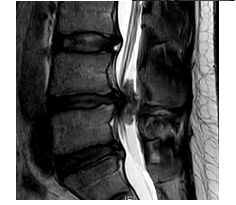 Figure 1: MRI of the lumbar spine (sagittal view) took on the day of admission. 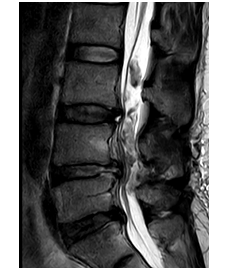 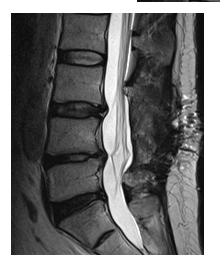 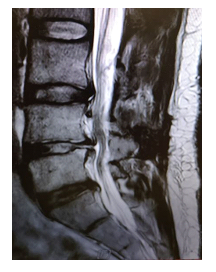 Figure 4: MRI of the lumbar spine (sagittal view) showing a direct connection of the intervertebral disc to the intradural compartment.

Intradural disc is a unique presentation of disc herniation. It was first described in 1942 [9] and since then it has been rarely reported. Most literature addressing the pathophysiology of intradural lumbar disc herniation are cadaveric studies. Currently only few case reports or series address this pathology. 92% of intradural disc herniation occurs in the lumbar spine [10]. Few theories that could explain this process have been discussed. One theory has suggested that longstanding mechanical compression of discs and osteophytes could make the Dura fragile and then facilitate intradural migration of disc fragments [11]. Another theory suggests that a sudden increase in the intervertebral disc pressure may result in rupture of the annulus fibrosus with intradural migration of the disc fragments [1]. A more frequently discussed theory assumes that the presence of extradural adhesions, e.g. following a previous spinal surgery, could provide a tract through which free disc fragments might migrate intradurally [5, 10, 12-14].

Our patient had a previous spinal surgery, discectomy, at the same segment two years ago. The 1st, incomplete, MRI showed a massive disc herniation at the level L4/5. Retrospectively, this preoperative MRI also clearly showed scar tissue at the level of L4/5 disc creating a direct connection of the lumbar disc to the intradural compartment (Figure 4), that has not been initially seen. This supports the ‘adhesions theory’ that has been most frequently discussed in literature. As we have not seen this rare presentation in our clinical practice before, an intradural herniation was not initially one of our differential diagnoses. Retrospectively, if complete MRI scans, under sufficient intravenous analgesics, were obtained in the first place and if we kept in mind this unique presentation as a possible pathology, alongside with the small extradural herniation found intraoperative; a durotomy should have been performed during the 1st surgical procedure to search for an intradural disc herniation. Also it is difficult to differentiate if the second intradural herniation was a recurrent herniation or simply a missed intradural fragment that was initially present and migrated cranially. Therefore, we would recommend doing a follow-up MRI within the first postoperative days, especially by persisting symptoms, to ensure the removal of all intradural disc fragments and to exclude early recurrence.

The aim of our paper is to report this rare presentation to raise the awareness of our colleague spine surgeons to keep ‘intradural disc herniation’ in mind as an important differential diagnosis.

Written informed consent was obtained from the patient for publication of this case report and any accompanying images. A copy of the written consent is available for review by the Editor-in-Chief of the journal.

We would like to acknowledge the patient for allowing us to use his data and images in this case report and allowing this case to be published. We would also like to thank our reviewers for reviewing this report. No funding was utilized for this report.