A 19-year-old woman with trisomy 21 and Graves' disease on propylthiouracil (PTU) admitted to the hospital with a one-month history of fever, cough, pleuritic chest pain and dyspnea. Chest imaging revealed bilateral lower lobe infiltrates, ground-glass opacity, pleural and pericardial effusions. A transthoracic echocardiogram confirmed the presence of circumferential pericardial effusion with constrictive physiology. Serological evaluation was positive for perinuclear anti-neutrophil cytoplasmic antibody (P-ANCA). Bronchoscopy with sequential bronchoalveolar lavage revealed progressively bloodier fluid in keeping with diffuse alveolar hemorrhage (DAH). PTU was discontinued, and prednisone was initiated. This led to complete resolution of clinical, serologic and radiographic abnormalities with no disease recurrence over a 5-year follow-up period. Although DAH, pleural or pericardial diseases are among the reported manifestations of PTU-associated vasculitis, this case is uniquely different from reported cases in the literature where all three manifestations co-occurred. It also has the longest follow-up period.

Propylthiouracil (PTU) is an effective treatment of Graves' disease and has been in clinical use since the 1940s. It achieves euthyroidism relatively quickly in preparation for definitive therapy with radioactive iodine or surgery. In some cases, PTU can be continued as a long-term monotherapy with an intention to induce remission [1]. Adverse reactions of PTU range from common minor side effects (e.g., pruritis, arthralgias, fever) to rare serious complications (e.g., agranulocytosis, hepatotoxicity, vasculitis) [2-4]. The severity and clinical manifestations of PTU-associated antineutrophil cytoplasmic antibodies (ANCA) vasculitis can vary from nonspecific constitutional symptoms to organ-specific or life-threatening complications, such as glomerulonephritis or diffuse alveolar hemorrhage (DAH) [5]. We describe a case of PTU-associated ANCA vasculitis, resulting in DAH, pleural and pericardial effusions in a young patient with Graves' disease and trisomy 21.

A 19-year-old Polish woman with trisomy 21 presented to the hospital with a one-month history of multiple respiratory symptoms. Her past medical history includes Graves' disease diagnosed at the age of 13. Since then, her thyroid condition was stable on PTU 100 mg/day. At the age of 19, she developed worsening thyrotoxicosis, for which PTU dose was increased to a total of 300 mg/day. Six months later, TSH remained suppressed (<0.05 mU/L), and both free T4 and T3 were persistently elevated (44 and 21.91 pmol/L, respectively). Hence, the dose of PTU was further increased to a total of 450 mg/day.

Three months later, the patient presented to the hospital with fever, dry cough, dyspnea and pleuritic chest pain. On examination, she was febrile and tachycardic, but blood pressure and oxygen saturation were normal. Breath sounds were reduced at the lung bases. A pericardial knock was present with elevated jugular venous pressure (JVP) 5 cm above the sternal angle. There was no evidence of pulsus paradoxus. Thyroid gland was diffusely enlarged, with no nodules or bruits. Leukocyte count was mildly elevated (12,300 × 109/L), and TSH was suppressed (0.16 mU/L). Chest radiography revealed bilateral lower lobe infiltrates, pleural effusion and enlarged cardiac silhouette. Antimicrobial therapy (cefotaxime and azithromycin) was initiated empirically for suspected pulmonary infection.

On the third day of admission, the patient developed worsening dyspnea and a decrease in oxygen saturation to 91%. Chest X-ray (CXR) showed interval worsening of airspace disease bilaterally with no change in effusion size. The complete blood count (CBC) revealed a drop in Hb by 20 g/L since admission. Hemolytic screen was negative. Antinuclear antibody (ANA) was positive with a speckled pattern (1:160). Anti-myeloperoxidase (MPO) titer was elevated at 12.1 U/ml with perinuclear anti-neutrophil cytoplasmic antibodies (p-ANCA) pattern on indirect immunofluorescence. Creatinine was normal, and urinalysis was negative for erythrocytes, protein or casts. A complete list of investigations is listed in (Table 1).

Table 1: Summary of serologic and other Investigations.

At this point, PTU was discontinued, and systemic corticosteroid (prednisone 50 mg daily) was initiated. We noticed a dramatic clinical and radiographic improvement within 72 hours. In a follow-up visit, four weeks post-hospitalization, the patient continued to do well while on prednisone, which was slowly tapered over 3 months period. A repeat CT scan of the chest thereupon showed complete resolution of alveolar infiltrates, GGO, pleural and pericardial effusions (Figure 1C-1D). Likewise, an echocardiogram demonstrated complete resolution of pericardial effusion and constrictive pericarditis. By six months, the p-ANCA levels normalized, and ANA remained mildly positive at baseline. Ultimately, the patient underwent a definitive treatment for her Graves' disease with radioactive iodine therapy. 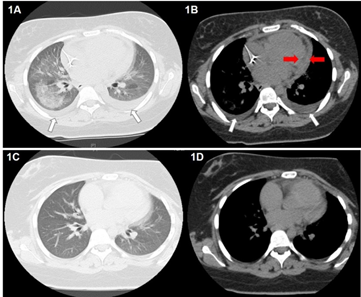 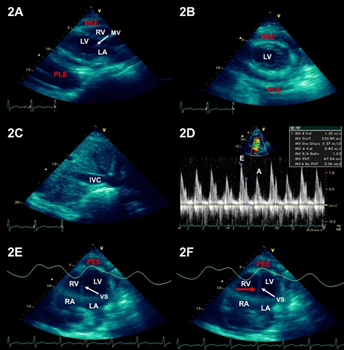 Figure 2: Parasternal long- and short-axis of the views of the heart seen on 2D-echocardiogram show both a moderate-sized pericardial effusion (PEE) and left-sided pleural effusion (PLE) (2A,2B). Slight dilation of the inferior vena cava (IVC) with no evidence of collapse on inspiration, suggestive of elevated right atrial pressures (2C). Increased respiratory variation (> 25%) with inflow velocity across the mitral valve during diastole is suggestive of pulsus paradoxus (2D). In (2E, 2F) the interventricular septum (VS) moves to the left with inspiration (red arrow). This is called a ‘septal bounce’, which further demonstrates evidence of pulsus paradoxus. The triad of pericardial effusion elevated right atrial pressures, and pulsus paradoxus on echocardiogram is consistent with a constrictive physiology. LV=left ventricle; RV=right ventricle; LA=left atrium; RA=right atrium; E=early diastole; A=filling post atrial contraction.

Asymptomatic serum ANCA positivity in patients taking PTU is common and widely variable. It is seen in about 15-64% of patients on PTU; however, the annual incidence of clinically evident vasculitis is very low, with estimated numbers between 0.47 and 0.71 patients per 10,000 patients [6]. The pathogenesis of drug-associated ANCA vasculitis is not well understood. It is likely multifactorial and requires an environmental trigger in a genetically predisposed individual. One hypothesis proposes that active neutrophils release MPO, which converts PTU to immunogenic metabolites that induce the production of ANCA. A more novel hypothesis suggests that neutrophil extracellular traps (NETs) induced by PTU can become more resistant to degradation and lead to more prolonged exposure of MPO to the immune system, facilitating the formation of MPO-ANCA [7]. It is also unknown whether a cumulative threshold dose of PTU will lead to clinical vasculitis or not [6].

The diagnosis of drug-associated vasculitis can be challenging and requires a high index of suspicion. Radić M et al. and colleagues proposed a definition of drug-associated vasculitis with 3 criteria must be met: (a) clinically evident vasculitis temporally related to using the offending drug and regressed with its discontinuation; (b) positive serum ANCA; and (c) excluding other types of vasculitis and medical condition that can mimic vasculitis [4]. Congruent with this definition, our patient fulfilled all 3 criteria. For one, she had clinical evidence of vasculitis (DAH, pleural and pericardial effusion) in the context of using PTU with complete resolution after stopping it. Two, she was p-ANCA positive. Third, a thorough workup for other types and possible causes of vasculitis was negative. It is worth mentioning that our patient had a mildly positive ANA. This may have raised a suspicion of drug-induced lupus (DIL). However, many reasons exist to refute its significance in our case. One, the ANA positivity in our patient was present prior to her manifestation and remained unchanged from baseline years after discontinuation of PTU and complete resolution of symptoms. Two, positive ANA is not uncommon in patients with Graves’ disease [8]. Three, PTU rarely can cause drug-induced lupus (DIL) [9]. Lastly, none of the other characteristic features of DIL like arthralgia, myalgia and positive anti-histone were seen in our case despite this mild ANA positivity pre, during and post her presentation [10]. Tissue diagnosis would have helped to confirm vasculitis, but would not differentiate drug-associated vasculitis from other forms of vasculitis. Unfortunately, a tissue diagnosis from our patient was not feasible, given the patient anxiety and concerns of complications related to performing lung or pericardial biopsy.

Once a clinical suspicion of drug-associated vasculitis arises, the offending drug should be discontinued as soon as possible. The optimal treatment of drug-associated vasculitis is unknown and should be tailored individually based on disease severity. If organ involvement present, treatment typically consists of systemic corticosteroids. Aggressive immunosuppression with pulse steroid, cyclophosphamide and/or plasma exchange should be considered in patients with severe or life-threatening diseases [7]. Unlike primary vasculitis, long-term maintenance therapy for drug-associated vasculitis is usually not needed [4]. Serological abnormalities can persist for up to two years post discontinuation of the offending drug without active clinical vasculitis and treatment should not be prolonged for persistently positive serology [4]. Drug-associated vasculitis usually has a milder course than primary vasculitis, with overall all good prognosis if the offending drug is discontinued promptly [4, 7]. The reported mortality is up to 10% and usually related to delay or misdiagnosis [11]. Re-challenge with the same medication or the same drug class is not advised as relapse may occur [7]. Although DAH, pleural and pericardial effusion are all reported manifestations of PTU-associated vasculitis, to our knowledge, this is the only reported case in which all three co-occurred. It also has the longest follow-up period for up to five years with no relapse.

Serum ANCA positivity is commonly seen with PTU, but only a minority of patients develop vasculitis. PTU-associated vasculitis can variably present with mild non-specific symptoms to an organ or life-threatening complications. Patients treated with PTU should be monitored closely, and clinicians should be aware of those complications. The cornerstone of treatment is the discontinuation of PTU. The intensity and duration of adjunctive therapy should individualize based on disease severity. Early discontinuation of PTU is associated with favorable outcome, whereas fatality is often related to misdiagnosis or delay in treatment.

No conflict of interest.

This article has never been submitted, published nor is under consideration by any other journal.