Desmoplastic Fibroblastoma of the Maxillary Sinus

Desmoplastic fibroblastoma, also called collagenous fibroma, is an uncommon, firm, slow-growing, painless, benign fibrous soft tissue tumor [1] once in a while, including bone. Evans first described this tumor in 1995. The maxillary sinus is a very uncommon site for desmoplastic fibroblastoma. Men are two and a half times more likely than women to experience these neoplasms in their fifth or sixth decades of life. Subcutaneous tissue or near the deep aspect of the skin Muscles of the skeleton of the arm, for example, are common position shoulder, upper back, and posterior neck [3]. Desmoplastic fibroblastoma in the Maxillary sinus is a very rare location to have in the third decade of life by location and age. Here we intend to present a case report of this particular case.

Collagenous fibroma (desmoplastic fibroblastoma) is a unique fibrous soft tissue tumor that comprises spindle-shaped to stellate fibroblastic cells sparsely distributed in a dense fibrous background. Previously depicted by Evans in 1995 [1]. From that point forward, the sore's most significant arrangement, with 63 cases, was distributed by Miettinen and Fetsch [2] in 1998. This tumor is characterized by spindle-shaped to stellate fibroblastic cells. Clinically, desmoplastic fibroblastoma presents as a firm mobile, painless mass, which develops gradually and is situated inside the subcutaneous tissues or skeletal muscle. Surgery is the treatment of choice. Neither nearby repeat nor metastases have been accounted for after resection [4]. It ordinarily happens in the fifth to seventh decade of life, with a significant male transcendence [2]. It has a wide anatomical distribution; nonetheless, the arms, shoulders, neck, hands, and feet are generally continuous destinations [2, 3]. It is usually situated in the subcutaneous tissue and skeletal muscle [2]. Uncommon areas for desmoplastic fibroblastoma includes the joint, oral cavity, dermis, lower abdomen, the parotid and lacrimal glands [4-10]. To the best of our knowledge, no radiologic reports of desmoplastic fibroblastoma mimicking maxillary sinus have been found.

The patient, a 28-year-old male, was admitted to the hospital due to "left facial discomfort for six days." The patient complained of facial discomfort after tooth extraction five days ago, with secretions flowing from the tooth's root, no pain, such as nose and pus, and occasionally first-class discomfort. He went to Zhaotong hospital of traditional Chinese medicine and underwent a CT examination of accessory nasal solid. It was found that there was a solid lesion on the left side, which was recommended to the higher hospital for further treatment. The patient came to our hospital for further treatment and was admitted with an "upper lesion on the left side." The diet was ok; expected the urine and stool; the weight was not reduced; the history of hypertension and heart disease was denied. The history of the urinary disease, vascular disease, and mental disease was also denied.

The bilateral atrial area was without pressure; pharynx was hanging in the middle, partial mucosa hyperemia, retropharyngeal few lymph vesicle hyperplasias were found. Bilateral tonsils were 1 degree large. It had a smooth surface without hyperemia; no pyogenic column was there. The larynx had bilateral pear-shaped symmetry, no effusion, and new organisms were found. Larynx epiglottis- was without curvature, sticky, smooth, bloodless, bilateral without swelling and organisms, bilateral activity was seen good, glottis seemed closed well, the left upper tooth was missing, and the surface was seen new and red.

In contrast-enhanced scan injected Iohexol 350, 100 ml, injection speed 5ml intravenously. The alveolar definite mixed low-density shadow of the left maxillary molar showed no noticeable enhancement; the size was about 4.2*3.4*5.6 cm. There were multiple broken rings and absorption of the adjacent bone, no definite sclerotic edge, the precise boundary of the lesion, symmetrical structure of the rest nasopharynx, tissue interface was distinct. There was no stenosis and displacement of pharyngeal fossa and parapharyngeal space. No abnormality of bilateral carotid sheath area and no abnormality of the corresponding intracranial structure was seen. The bony window showed no destruction of the skull base. The nasal septum was seen slightly to the right. The double inferior turbinate was hypertrophic, and the local nasal mucosa was somewhat thickened. In the other groups, the accessory nose was developed usually, gasified well, and found no abnormal density shadow in the cavity; no abnormality was found in the other paranasal sinuses.

Pathological report of the left maxillary mass biopsy, Production content was the wax block, one slice: 5 pieces of immunohistochemistry: 7. In items of special staining: 1 object from the naked eye has been observed. Found a pile of grayish- white and grayish red soft tissue, 1*1*0.2 cm in size, buried in the box. The pathological findings were as follows: (left maxillary sinus tumor) part of the fibrous tissue for proliferation and necrotic tissue; no malignant lesions were found. Immunohistochemical results showed that wax block 1ck wide (-), CK low (EA (-) 167 (3%) P40 (-), CK 5/6 (Ca (scattered +) particular staining results was one wax block with silver staining (+) positive. 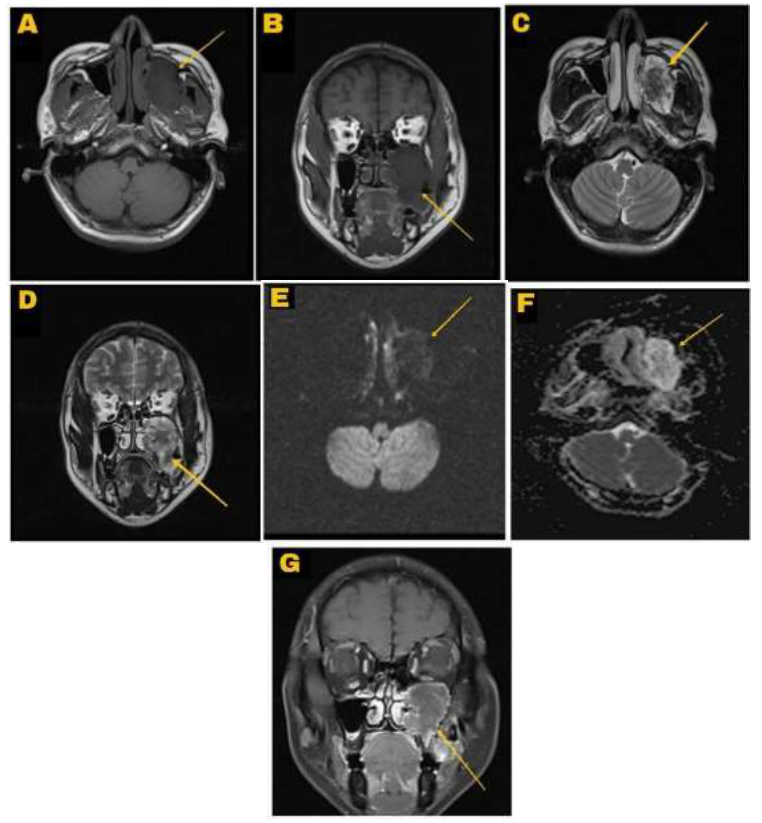 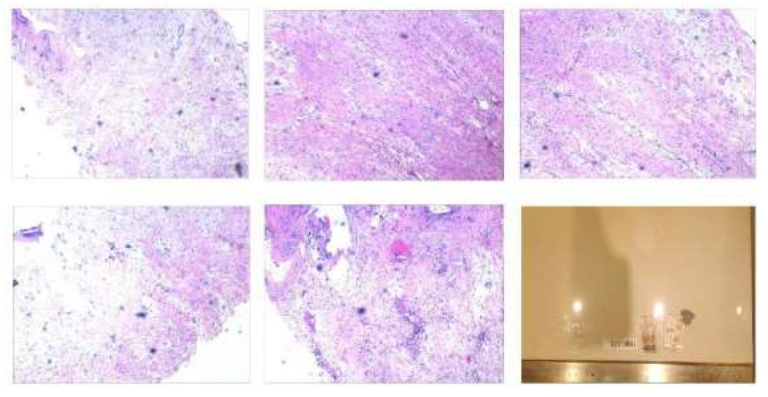 Desmoplastic fibroblastoma is a distinctive form of benign fibrous soft-tissue tumor described for the first time by Evans. Several articles reported this entity, with Miettinen and Fetsch publishing the most extensive 63 cases [2]. It is most commonly seen in the subcutaneous tissue and skeletal muscle. Men are two and a half times more likely than women to develop these neoplasms in their fifth or sixth decades of life. Excision of the lesion is curative, and there has been no evidence of aggressive development (12).

Desmoplastic fibroblastoma manifests itself clinically as a well-circumscribed, painless, firm, round or oval, movable, slowly developing mass. The diameters ranged from 1 to 20 centimeters. It is frequently present in subcutaneous tissue or the deep aspect of skeletal muscles. The arm, shoulder, posterior neck, and upper back are all common places [1-8]. Tumors growing in the thigh have been described in a few prior instances [1, 2, 6, 8]. The tumor in our current patient seems to have originated in the maxillary sinus. The left superior sinus occupied the space, the lesion grew downward, involved the left superior alveolar, locally protruded into the left ethmoid sinus. The lesion was well-circumscribed, the diameter was under the range.

Under the microscope, the bland spindle or stellate-shaped fibroblasts are dispersed in the dense and abundant collagenous matrix [15]. In the presented case, the dispersed spindle-shaped & stellate tumor cells present inside a dense myxoid stroma matrix and benign-appearing spindle cells presenting higher cellularity than in the fibrous area, which is characteristic of desmoplastic fibroblastoma. You can easily appreciate this from histopathological findings in the presenting picture.

In radiological findings of our case, there was a mass of slightly long T1 mixed T2 signal shadow in the left maxillary sinus with clear boundary, about 4.2*3.4*5.6 cm in size. The bone of the sinus wall was destroyed, the lesion grew downward, involved the left upper alveolar, and locally protruded into the left ethmoid. The lower part of the lesion revealed notable uneven enhancement on the contrast-enhanced imaging. The rest showed edge enhancement and pushed the surrounding pterygoid and masseter muscles. The morphological signals of the right superior sinus, frontal sinus right ethmoid sinus were normal. On MRI, T1-weighted images of the mass represented a mixture of low-intensity SI and ISO. With T2 weighting, the mass showed scattered areas of high IS within an area of low IS. Contrast-weighted T1 images demonstrated inhomogeneous enhancement after contrast administration and the unenhanced regions corresponding to the low-IS areas on T1-weighted images without contrast.

In some instances, bone desmoid-type fibromatosis treatment includes marginal or wide resection with or without replacement by allograft or amputation. However, complete surgical excision is recommended for desmoplastic fibroblastoma due to the benign nature of this neoplasm. There have been no reports of tumor recurrence during follow-up, including the current case, when surgical resection was undertaken. Strong mass without calcification is the most common radiological finding in desmoplastic fibroblastoma. On rare occasions, a highly calcified mass or the presence of diffused dystrophic calcification has been discovered [13, 14]. Desmoplastic fibroblastomas have inhomogeneously low to moderate signal intensity on T1-weighted pictures, low to slightly higher signal intensity on T2-weighted images, and contrast-enhanced images. Low to moderate or heterogeneous enhancement with areas of no enhancement can be seen in T1-weighted images [8, 11, 13, 14].

We have de-identified all data to ensure patient confidentiality.

The patient's written informed consent for print, and the authors acquired electronic publication of this case report.

The authors declared no conflict of interest.

The hospital's ethical committee has approved this case report.