Diabetic mastopathy is a rare condition representing less than 1% of all benign breast lesions, occurring preferentially in pre-menopausal women affected by long-standing type 1 diabetes, especially in presence of microvascular diabetic complications. Its exact etiopathogenesis is still unclear, however an autoimmune background is highly hypothesized. In some cases, diabetic mastopathy strongly mimicks breast cancer. To date, no widely accepted diagnostic guidelines have been established for this pathological condition, however core-needle biopsy represents the gold standard for diagnosis. Surgical excision is the primary treatment option, taking into consideration the potential development of diabetic mastopathy into a breast cancer. We here describe for the first time the coexistence of diabetic mastopathy with a neuroendocrine tumor in a long-standing type 1 diabetic woman. This association apparently seems “incidental”, however it would be interesting to verify whether other cases will be reported in order to clarify the possible relationship between these two pathological conditions.

Diabetic mastopathy is a rare pathological condition which represents less than 1% of all benign breast lesions [1], first described in 1984 [2]. According to the literature, approximately 200 cases have been reported up to 2013 [3]. Diabetic mastopathy occurs mostly in pre-menopausal women (aged between 20 and 40 years) [3] affected by long-standing type 1 diabetes, especially in the presence of chronic microvascular diabetic complications (such as diabetic nephropathy, diabetic retinopathy, diabetic neuropathy)[4, 5]. In rare cases, diabetic mastopathy may occur in women with type 2 diabetes or without diabetes, as well as in men [3, 6, 7]. In the case of diabetic patients, the time window between the onset of diabetes and the detection of diabetic mastopathy is, on average, about 20 years, and the number and size of lesions seem to correlate with the progression of the underlying disease [6]. Moreover, diabetic mastopathy has been described in association with other autoimmune diseases (e.g. arthropathies or thyroid diseases such as Hashimoto’s thyroiditis), and in these cases it most frequently occurs with breast bilateral lesions [6].

Diabetic mastopathy is also known as ”lymphatic mastopathy“, ”fibrocystic mastopathy“, or ”fibrocystic breast degeneration"[8]. Its etiopathogenesis is still unclear, however an autoimmune background is highly hypothesized. In this regard, it has been shown that breast lesions contain infiltrating B-cell lymphocytes together with an increased HLA-DR expression by breast epithelial cells; these findings are common to other autoimmune diseases [1, 9]. It has been also hypothesized that fibroinflammatory changes, characteristic of diabetic mastopathy, could be partly related to hyperglycemia and the consequent glycosilation end-products (AGEs) storage within mammarian tissue [10]. AGEs would act as antigens inducing autoimmune B-lymphocyte proliferation and autoantibody production [11]; a release of cytokines would occur subsequently, causing the expansion of the extracellular matrix with increased collagen production and decreased collagen degradation [11].

Clinically diabetic mastopathy is characterized by the presence of breast nodules (bilateral in nearly 50% of cases) that are hard, painless, irregular and movable on palpation, involving all quadrants of the mammary gland (preferentially the upper lateral/medial part) with a size, on average, ranging from 0,5 to 3,7 cm [2].

Radiologically, a localized increased density or a heterogeneous parenchymal pattern is described [12]. In such cases diabetic mastopathy strongly mimicks breast cancer and it might not be possible to accurately differentiate these two conditions by imaging studies alone [2]. Core-needle biopsy represents the gold standard for diagnosis [13]: histologically a rich, mainly perivascular and peritubular B-lymphocytic infiltrate is observed, associated with foci of dense fibrosis and lobular atrophy [6]. To date, no widely accepted diagnostic guidelines of diabetic mastopathy have been established and over the years several authors have proposed different diagnostic criteria, as summarized by Chan et al (Table 1)[3, 11, 14, 15].

Although diabetic mastopathy lesions are benign and spontaneous regression can occur, surgical excision with an adequate normal breast tissue margin remains the primary treatment option, also taking into account that diabetic mastopathy could evolve into a breast cancer [6, 8, 16]. New lesions can also develop with a recurrence rate of 30% and education of patients in performing self-examination is crucial, as well as an annual mammography [17, 18].

We present the case of a 41 years old woman, affected by type 1 diabetes since the age of 5 years (diabetes duration 36 years). The patient attends the Diabetes and Metabolic Diseases Unit, Azienda Ospedaliera Universitaria Senese and her diabetes treatment is based on a hybrid-closed loop insulin infusion system composed by an insulin pump associated with a continuous glucose sensor (Medtronic 780G system with smartguard associated with Guardian sensor). Over the years, the patient has always maintained a good glyco-metabolic control, without development of chronic diabetic complications, nor of other autoimmune diseases.

In april 2021 she was hospitalized for an acute appendicitis and underwent surgical appendectomy. The histological examination showed a well differentiated neuroendocrine neoplasia (NET G1). Colonscopy subsequently performed and Computed Tomography(CT)/Positron Emission Tomography(PET) examination did not show additional lesions. During the same month, as a routine examination, the patient underwent mammography, which showed “left breast: absence of evolutive focal lesions and suspicious microcalcifications; right breast: microcalcifications in the retroareolar site with benignity features, modest ductal ectasia and evidence of a 7 x 5 mm polymorphic cluster -classified as category 3 at BI-RADS system-, deserving of stereotaxis microhistological classification” After mammography, a core-needle biopsy was performed and the histological examination reported: "fibroadipose frustules with apocrine ductal hyperplasia with papillary architecture and slight cytological atypia. Ductal ectasies. Intraductal and stromal microcalcifications. Lesion with uncertain malignancy potential ". In view of these findings, it was decided to perform a right quadrantectomy surgery. The macroscopic appearance of the mammary gland viewed during surgery was suggestive of diabetic mastopathy, subsequently confirmed by the histological evaluation. In particular, periductal inflammatory infiltrate predominantly lymphocytic was described, in addition to the presence of intraductal papillomas and ductal hyperplasia. (Figure 1). 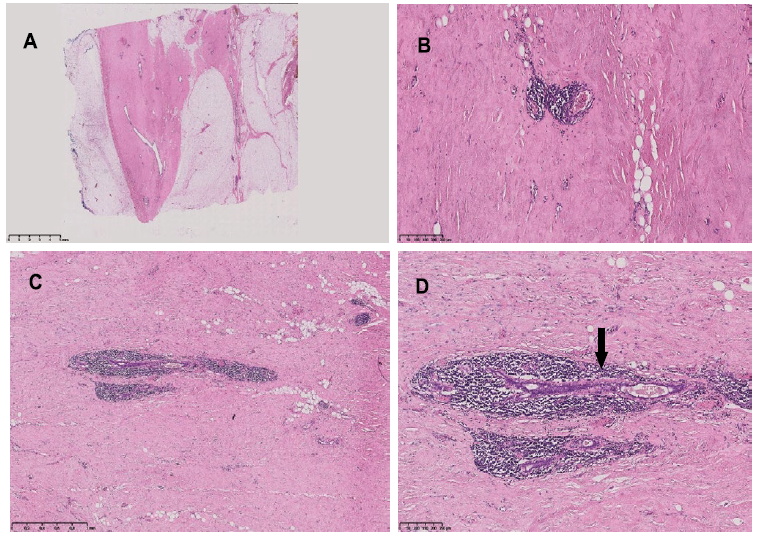 One year later, the patient is in apparent good health. Follow-up mammography was negative for pathological lesions. Follow-up oncologic evaluation (radiological examinations and neuroendocrine markers) was not indicative for disease recurrence.

None of the authors have any conflict of interest to report.