This study aims to understand the mechanism of lipid loss from the hair upon contact with surfactants. We herein proposes that the process of lipid loss can be categorized into two mechanisms. In the first mechanism, the lipids inside the hair diffuse through the cell membrane complex (CMC) to the outermost layer of hair and are removed by a roll-up mechanism. In the second mechanism, the surfactant that penetrates hair directly emulsifies the lipids. The mechanism of lipid loss depends on the relative of the lipid. Highly hydrophobic lipids, such as and wax esters, are primarily lost through the penetration pathway, while relatively less hydrophobic lipids, such as fatty acids and cholesterol, follow the roll-up mechanism. These mechanisms were validated by confirming that surface and internal modifications of hair protected different types of lipids from the surfactant treatment.

Surfactants play a significant role in maintaining cleanliness but destroy the lipid barrier of human tissues [1]. Destruction of the lipid barrier leads to problems such as loss of moisture, accelerating aging. Therefore, understanding the mechanism by which surfactants destroy the lipid barrier of tissues and establishing effective solutions to prevent this destruction become more significant. Hair can be a good model for understanding how lipids are lost from tissues by surfactants. Since hair contains various lipids [2], it is advantageous to identify the effects of surfactants on various lipid types. Additionally, by virtue of the well-known structure of hair [2], the interpretation of the location at which the surfactants act is possible. Furthermore, because hair is an inactive tissue, the lipid that is lost is not naturally generated from the inside but has to be supplied from the external scarp [3]. Thus, the loss of lipids can be clearly monitored when the supply of external sebum is blocked. The composition and location of hair lipids have been revealed by several groups [4-10]. However, no studies have been conducted to directly characterize the loss of hair lipids. To identify the characteristics of the loss of hair lipids, we have characterized lipid loss by surfactants could be identified. This article shows that the hydrophobicity of lipids distinguishes the mechanisms of lipid loss in response to surfactant treatment.

Surface and internal modifications were performed using a shampoo consisting of surfactant and a cationic conditioning polymer. The shampoos that were used in all tests were formulated as a mixture of ingredients in water. As a conditioning polymer, 0.5% PQ-10 (LR30M, Dow Chemical, US), a cationic cellulose polymer, was employed. The ingredients were generated by mixing the solid that needed to be melted with water at a mixing speed of up to 400 rpm. Other ingredients, including polylysine and polycarbodiimide polymers, were also added to the cooled product.

The following procedure applies to the extraction of lipids from human hair. A 15 cm hair swatch was cut into lengths below 1 mm with a mass of 50 mg, and the hair residue was transferred into a 15 mL vial filled with 3 mL of following solvents. Lipid was extracted merely by isolation with the solvents of chloroform and methanol. The vial was tightly covered with a Teflon cap, and the vial was incubated at 80°C for 4 days.

2.3 Preparation of keratin-based film and measurement of contact angle

White hair was used to extract keratin protein because it is difficult to determine protein concentrations in black hair by optical transmission due to melanin (20). 2 g of white hair was thoroughly washed with 95% ethanol, and rinsed with clean water. The dried hair samples were cut into snippets of a few millimeters and then placed into 30 mL of an aqueous solution containing 25 mM Tris-HCl buffer (pH 9.0), 2.6 M thiourea, 5 M urea and 5% β-mercaptoethanol for 3 days. The solution was filtered with a vacuum pump, and the concentration determined by an optical spectrometer (Nanodrop2000, Thermo Scientific, US) was 170 mg mL-1. The protein solution was then diluted 1:3 in a solution containing 1 M NaCl, and 10 mM MgCl2. After gelation for 4 h, the supernatant was removed and the film was washed several times with pure water. Thereafter, the film was dried in the air. To adsorb a cationic polymer onto the keratin-based film, the film was placed in 2 mL of a cleansing solution for 5 min. The solution was removed and discarded. The film was thoroughly washed three times with 2 mL of pure water, and air-dried. The zeta potential of the film was tested using a Zeta-potential & Particle size Analyzer ELSZ-2000. Distilled water with a refractive index of 1.3328, viscosity of 0.8878 cP, and dielectric constant of 78.3 was used as a dispersive medium.

Lipid complexes were prepared by dissolving solid lipids in an aqueous lipid at 50°C and 150 rpm for 5 min with a single step addition of each lipid. Myristic acid, palmitic acid, stearic acid, and cholesterol (1:2:1:1, w/w) were mixed in oleic acid. Static contact angle measurements using a drop volume method were recorded and analyzed at room temperature by a Sanyo camera with FTA 32 (Ver 2.0). An acrylic cube filled with 0.36 mM SLES solution was set on a surface analyzer, DSA-100 (Krüss, Germany). The concentration of 0.36 mM was the estimated value derived from rinsing solutions after shampooing. The cube has hole at the bottom, and the hole is covered with a rubber stopper. A syringe filled with the lipid mixture penetrated the rubber stopper. The contact angle was measured after 30 s of lipid loading on the keratin film.

Methylation is a general method to extract lipids from hair. When the extraction is performed after methylation, there is a limitation in that the amount of wax esters and triglycerides cannot be accurately analyzed because they are transformed into fatty acid methyl esters after methylation. Therefore, to investigate the behavior of lipids in response to surfactants in detail, the extraction of lipids without the methylation process was conducted, which resulted in the extraction of noncovalently bound lipids. During the washing, the surfactant can access the covalently bound lipids, but since the bond is not substantially broken by surfactants, the methylation process is not required to analyze the loss of lipids occurring by the washing [11].

Figure 1: Lipid concentration from the hairs washed by the immersion method, and hair washed by the rubbing method. CH=cholesterol; SQ=squalene

Hair swatches were immersed for various periods of time, and the other swatches were washed several times by the rubbing method so that the contact time with the surfactant was the same as the immersion time. Lipid loss by washing 10 times was conspicuously observed, as shown in Figure 1. Interestingly, the retained lipids in Group A and B are different. The concentrations by rubbing are higher than those in immersion for lipids in group A. This indicates that the immersion method for group B played the role of the extraction. Additionally, this suggests that the loss mechanism for two types of lipids are different.

Figure 2: Keratin-based film from human hair. (A) AFM image (B) Contact angles of hair lipids for group A. The SEM image showing the surface of the fabricated keratin film was inserted in the graph.

Surface coating decreases interfacial tension between hair surface and lipids in group A from hair [1]. To clarify interfacial behaviors of a lipid mixture consisting of group A lipids on hair, contact angles were measured in an SLES solution. Since the shape of hair is cylindrical, it is difficult to obtain an immobile droplet. A static contact angle on a flat surface was required, so a film composed of keratin proteins isolated from human hair was first fabricated. The fabricated film was flat enough to provide an immobile droplet. This was demonstrated by identifying a low root mean square (RMS) value of 40 nm from the AFM (atomic force microscope) image on square area of 5 × 5 μm. The keratin film treated with a shampoo containing a cationic polymer with 1.0% nitrogen content was measured, and a contact angle of 113o was obtained from the lipids. ζ-potential of the control keratin film coated with the cationic polymer having 1.0% nitrogen content was -11 mV, whereas that of film with PQ10B was 19 mV1. This increase in ζ-potential is in good agreement with the phenomenon occurred in real hairs.

As the percent of nitrogen content increases, the contact angle of lipid in group A reduces. As can be seen in Figure 2, the reduction in the contact angle on the positively charged keratin-based film means that the polymer for the surface modification blocks the roll-up mechanism. Although the retained lipids can be removed in repetitive wash, the hydrophilic nature will be able to retain some lipids in group A. 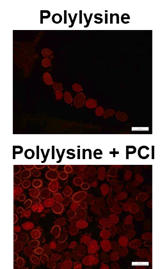 To fill polymer inside the hair, carbodiimide chemistry was performed with lysine and polycarbodiimide (PCI). The penetration of TAMRA-labeled polylysine into the hair was performed by the cross-sections in Figure 3. Tryptophan in an untreated control hair also can generate fluorescence at lower than 500 nn [12-13]. And we detected the emission at 594 nm. Thus, there was no fluorescence in the control hair. At the images in Figure 3, it is obvious that the TAMRA-labeled polylysine and PCI penetrated the hair, because the fluorescence intensity from the hair with polylysine and PCI was higher than that from the hair with polylysine only. 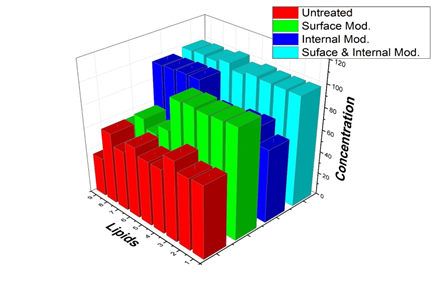 Finally, we washed hair modified by coating with lower interfacial tension (highly cationic charged film) as shown in Figure 2 and filling with a cross section as shown in Figure 3. The amounts of lipids after 10 times wash are shown in Figure 4. Compared to that in the control group, in the surface-modified group represented by green bars, most amounts of the components of group A (from 1 to 5), such as fatty acids and cholesterol, were prevented after washing with surfactants. Unlike the results of the components of group A, the surface modification did not significantly inhibit the loss of squalene and wax esters (group B; from 6 to 9). The losses of fatty acids and cholesterol (group A) were not significantly affected by whether the hair was internally modified. The lipids in group A were highly affected by surface modification, whereas the lipids in group B were influenced by internal modification as shown in blue bars. Finally, different types of lipids were successfully protected by surface and internal modifications from the surfactant treatment (cyan bars).

In this study, we used hair as a representative model of tissue and systematically demonstrated how lipids in tissues are lost by surfactant use. It has been demonstrated that the mechanism by which lipids are lost from tissues depends on the type of lipid. This scientific finding would be a good basis for maintaining the health of our external tissues, such as skin and hair.

All authors are employed by LG Household & Health Care, Ltd.