Congenital Chloride Diarrhea (CCD) is a rare autosomalrecessive disorder primarily characterized by severe watery diarrhea and fecal loss of large amounts of chloride. Maintaining adequate chloride status in adolescent CCDpatients is achieved by oral NaCl and KCl containing 3-4 mmol chloride/kg body weight/day. The best available control of chloride status is measuring chloride excretion in 24-hour urine collections. We here report a now twenty year-old caucasian CCD-patient with a compound heterozygous mutation in the SLC26A3 gene who presented with severe growth-retardation as evidenced by a Standard Deviation Score (SDS) for height of -3.57. His serum choride concentration was as low as 73 mmol/L and no chloride was detectable in his urine on many occasions over several years. Based on these laboratory findings the patient was repeatedly instructed to increase his salt intake which finally resulted in as much as six times the recommended dose of chloride, i.e.more than 20 - 25 mmol/kg/d. Only then he achieved measurable amounts of chloride in his urine and regained age-adequate growth. This paper should alert physicians to the possibility that in certain CCD patients salt intake reports in conjunction with laboratory results may falsely indicate the need for a much higher than usual chloride supplementation than hitherto reported. While non-compliance in adhering to physician´s prescriptions is believed to be the most probable cause, other potential etiologies, including medications driving chloride excretion, gut resection, infection/inflammation and novel as yet undiscovered genetic disorders in addition to SLC26A3-mutations should not be neglected.

Approximately 300 patients with genetically proven CCD have been reported in the literature so far [1,2 ,3 ]. Early diagnosis by mutational analysis and sufficient salt substitution with NaCl and KCl providing 3-4 mmol/kg body weight/day of chloride for older children and adolescents are the mainstays for a favorable long-term outcome of the disease [4,5]. Non-compliance and a variety of complications such as acute gastroenteritis or chronic infectious/inflammatory gastrointestinal disorders may be associated with severe dehydration which, if not treated in due time, may result in renal damage, dyselectrolytemia, osteoporosis and growth retardation. To date, we are not aware of any publication advocating substantially larger than the aforementioned doses of chloride for long term treatment of CCD patients. Our paper, however, reports a unique severely growth-retarded subject with CCD in whom, after resection of a relatively short portion of his gut, up to six times higher than usual doses of chloride were prescribed because of frequent hypochloremia and unmeasurable urine chloride concentrations on many occasions.

A nine year old caucasian male from Lower Austria was brought to our attention because of progressive growth retardation. The boy was born in a regional hospital at 34 weeks gestation by Cesarian section following ultrasound findings of massively dilated bowel loops. Postnatally, a grossly distended abdomen was noted and an ileostoma applied. At three months age, due to chronic subileus, 10 cm of terminal ileum, the ileocecal valve and the proximal cecum were resected and an ileocolic anastomosis established. The boy was then suspected to have CCD. Mutation analysis of the SLC26A3 gene revealed compound heterozygosity for a deletion of exons 4-8 (c.272-?971+?del) and a hemizygous c.386C>T mutation in exon 5. After weaning from parenteral nutrition he was treated with Holmberg´s solution [4,5] but gradually refused to take fluids by mouth. From the age of 28 months on he was nurtured via a Percutaneous Endoscopic Gastrostomy Tube (PEG). For the subsequent years he received approximately 5 - 6 mmol/kg/day of chloride. At 6 years the patient was able to take solid food and NaCl + KCl capsules by mouth (6-7 mmol/kg/d chloride) so that the PEG could be removed. During the time of PEG-feeding the patient´s height was stably increasing along the 10th to 25th centile. However, from the age of 9 years on his growth slowed down considerably (Figure 1). 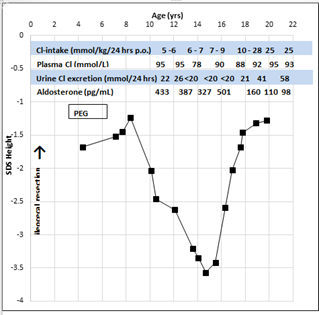 When the boy was 10 years old our pediatric gastrointestinal unit became involved in his management. We found, that his 24-hour urine chloride excretion was unmeasurably low even when he was given increasing amounts of oral NaCl and KCl gradually exceeding the recommended dose of 3-4 mmol/kg/d of chloride [4, 5]. Chloride plasma concentrations at that time were variably decreased (Figure 1). Fecal chloride concentrations were between 97 and 160 mmol/kg stool. We could not find any laboratory signs of inflammation (normal values for erythrocyte sedimentation rate, C-reactive protein, ferritin, albumin and fecal calprotectin). During the following years, the patient´s height dropped further to reach a minimum of -3.57 SDS at age 15 years. Only after his oral chloride prescription had been increased to as much as 20 -28 mmol/kg/d, chloride began to be excreted in low-normal amounts in his 24-hour urine collections (Figure 1) and rapid catchup growth ensued over the subsequent years.

The aim of this case report was to draw attention to the possibility that for certain CCD patients higher chloride supplementation may be needed than hitherto reported. Because chloride status - according to the literature - is considered adequate when chloride is traceable in urine [4,5] we took a urine chloride excretion value of above 20 mmol/24 hours as the minimal necessary amount to indicate sufficient chloride supply. Our adolescent patient did not stably reach this threshold for a considerable time until he was instructed to take the large doses of oral chloride prescribed (Figure1). The true amount of chloride, however, that was actually taken by the patient remains unclear. so that the most probable cause of the patient´s chloride deprivation, i.e. non-compliance with ingesting the required amounts of salt, could not be verified until to date. Strictly controlled balance studies (input/output) could so far not be performed but will be needed to find out the true chloride requirements. In addition, several other etiologies may theoretically play a role in the unusual chloride “hunger” of our patient:

First, the patient´s ileocecal resection may lead to increased loss of electrolytes into the colon. However,as chloride passes the mucosa via many distinct transporters throughout the gut [6] it is, difficult to imagine that the removal of the relatively small absorptive area of the ileocecum should be responsible. In addition, the descending colon as an important site of chloride reabsorption is preserved in our patient. Also, we did not find information in the literature indicating dramatically increased chloride need in CCD or non-CCD patients with ileocecal resection after reestablishment of ileo-colonic continuity [1,7].

Second, small bowel bacterial overgrowth (SIBO) [8] remains to be excluded as a theoretically possible cause of increased fecal chloride loss, although in our patient no typical signs of this disorder such as flatulence, severe abdominal discomfort, greasy/bulky stools, pathogenic stool bacteria or vitamin B12 deficiency were found. Nevertheless, an hydrogen breath test with lactulose or glucose should be performed and - if abnormal - treatment with rifaximin and investigation of post-treatment chloride balance will be required.

Third, we also considered inflammatory bowel disease [9, 10, 11] but did not perform endoscopy/histology evaluation because of the unequivocal results of the SLC26A3 mutational analysis and because of normal laboratory IBD parameters (see case report data), rendering inflammation unlikely. However, in the light of reports on increased numbers of IBD cases in CCD [9-11] endoscopy and histology may appear important in our patient. Also, considering recent results by Kurteva et al. [12] who did find inflammatory mucosal abnormalities in CCD, further histological evaluation seems warranted.

Fourth, we were unable to identify any potential iatrogenic causes, such as taking diuretics or laxatives that may explain our patient´s chloride deprivation Finally, no distinct mutation in SLC26A3 has been reported to date that has been associated with such exceptionally high chloride need as seen in our patient [4, 5]. It is, however, not known whether the patient´s new compound heterozygous SLC26A3 mutation causes increased chloride need per se or together with potential other non-SLC26A3-based chloride transporter defects e.g. of various sodium/chloride or potassium/chloride transporters [6]. Therefore, a whole genome scan and transporter studies are suggested for our patient.

In this report of a single case of CCD we wanted discuss the possibility that in certain CCD patients higher chloride supplementation may be needed to maintain a safe chloride status. The patient´s non-compliance with taking the required amounts of salt remains the most liable reason for his chloride-depleted state. However, to finally resolve the true pathogentic mechanism will afford considerable time and efforts. Because of the danger of CCD-typical complications such as dehydration, electrolyte disturbances, renal damage, osteoporosis, bone fractures and growth retardation we have therefore chosen to describe the patient´s present situation before the definite clarification of his unexplained high chloride need as early as possible.