Facial Artery Propeller Flap for the Reconstruction of Upper Lip and Nostril: A Case Report

Reconstruction of the perioral and perinasal regions after tumour removal can sometimes be complicated. The main challenge is to reconstruct the entire area (as all facial units) in the most anatomical way possible, using tissues that are as similar as possible (in texture and colour) to those removed. Reconstruction is guided by different elements such as defect size, donor site availability, tissue matching, existing scars etc. [1] Local flaps, when possible, are considered the best option for moderate-sized defects in the face but they are often limited by a restricted range of motion and bulkiness at the pedicle site, necessitating a delay and a secondary procedure [2]. Perforator flaps, first described by Taylor and Palmer in 1987 [3], can give a solution to these problems with minimal morbidity and pleasing result. In the face, the perforators of the nasolabial fold are the most common used. In this article we describe our reconstructive approach with FAP flap in the case of a large basal cell carcinoma involving the upper lip, the nasal floor, the septum, and the root of the right nasal wing.

We present here the case of G.P., 58yo, who went to our attention following the appearance of a painless plaque on the right upper lip and the edge of the nostril. On physical examination, the lesion also partially involved the root of the nasal right wing and the right hemi-side of the nasal septum and columella. It was about 2cm in diameter, not ulcerated and appeared adherent respect the underlying deep muscular plane (Figure 1). The dermatological examination, performed to complete our visit, confirmed the possible tumour aetiology of the plaque, and gave the suspicion of a Basal Cell Carcinoma (BCC), confirmed by an incisional biopsy. In anamnesis the patient reported a previous rhinoplasty operation performed about 20 years ago for a deviation of the nasal septum. She also suffers of hypothyroidism which she is being treated with levothyroxine. Before proposing a demolitive surgery, an incisional biopsy was performed which confirmed the suspicion of BCC. MRI and ENT examination were performed to complete the staging and better evaluate tumour extension and infiltration. They showed the involvement of the deep muscular plane, the extension of about 4mm inside the right nostril (along the floor, the wing, and the columella) and the apparent absence of involvement of septal cartilage. On 2 March 2022 the patient underwent surgery to remove the lesion and, after having obtained the negativity of the margins, septal cartilage and fundus at the extemporaneous frozen section histology, reconstruction using a propeller flap based on the perforating vessels of the facial artery along the nasolabial fold. Surgical technique: the operation started with tumor resection with wide margins and, where appropriate, conformation of a free margin with frozen section histology. The part of the defect to be reconstructed with the facial artery perforator flap was measured and a foil template was made. The FAP flap option was planned based on the most likely location (neighboring the nasal base) of a useful perforator, which was searched with a hand-held doppler (Figure 1). A perforator was located where it was expected to be found by a careful dissection and inspection, and then the skin island was raised and transposed accordingly. The flap was inset into the defect area along the axis of the perforator by about 110° rotation. Few subcutaneous sutures (Vicryl 5\0) were placed to give a tension-free inset to the flap, skin was sutured with Prolene 5\0 and 6\0 while stiches inside nostril were in absorbable Vicryl Rapide 5\0 (Figure 2). A nasal swab was placed at the end of the surgical procedure, and it was maintained until discharge. The postoperative course was regular, with no complications. Patient was discharged after two days, and non-absorbable sutures were removed after six days (Figure 3). Definitive histological examination confirmed the presence of a BCC widely involving the muscle in depth, but completely excised. After one month (Figure 4) there are no signs of disease recurrence and the patient’s overall satisfaction appears decidedly high. Due to the short time elapsed since the operation, the flap suffers of a moderate trapdoor effect, described by Koranda et al. [4] in 1985 for flaps of this region. Scars, instead, are well established and well tolerated in the context of the face (Figure 5). 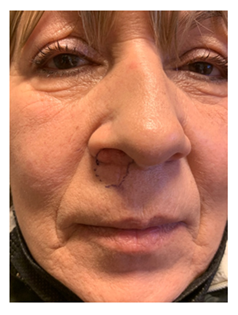 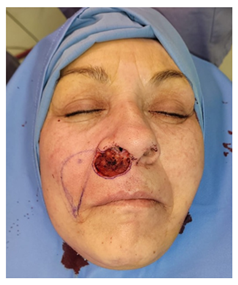 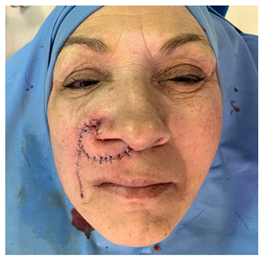 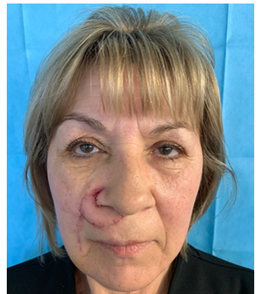 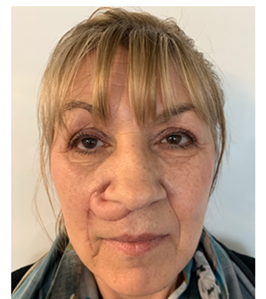 Various methods from local flaps to free tissue transfers have been described for the reconstruction of midfacial defects resulting from trauma or tumor resections. Local flaps provide always superior aesthetic results because these tissues have the same characteristics as the defect [4]. Nasolabial flaps are among the most frequently used types of flaps in the repair of midfacial defects, and they have evolved into different forms for the reconstruction of various areas. Like the classic nasolabial flaps, perforator-based nasolabial flaps also make a repair using a similar tissue with the same color possible and the donor area scar is hidden in the nasolabial fold. Moreover, the greatest advantage of a perforator flap is its wide rotation arc around the perforator artery, giving the possibility to reach farther defects and repairing them in one session. FAP flap, first described by Hofer et al. in 2005 [4], has been occasionally proposed in specific cases for the reconstruction of central facial units. First through an interesting anatomical study and then also in practice, they confirmed the goodness of this flap in the reconstruction of defects in the perioral region. The most common complication was highlighted: venous congestion is a possibility that occurs early quite frequently, in particular linked to cases in which the pedicle is excessively skeletonized. This flap is very versatile. It can be mobilized either as a rotation, or as an advancement or transposition. Camuzard et al. [5] tried to improve the knowledge of FAP flap through an exhaustive anatomical study. They focused on the possibility to use it for the reconstruction of perinasal defects, identifying nasolabial skin as the donor site of choice for this area, due to the reliable presence of perforators with adequate diameter and length. Youanzhen et al. [6] reported 17 cases of upper lip reconstruction after tumor excision using FAP flap. They obtained satisfactory results both from patient’s and surgical point of view, reporting low deformity of the treated area and primary healing in all donor sites. Durgun et al. [7] presented a wider prospective of FAP flap use, describing its application on the lower two thirds of the face after tumor excision, infections, or trauma; they obtained in fact optimal results for reconstructions of upper and lower lip, cheek, nasal area, and intraoral regions, describing nor partial or total flap losses. A recent article has deepened the use of this reconstruction in the repair of intraoral defects [5]. FAP flap can be considered as an option in case of intraoral defects until 5x4cm, besides without significant donor site morbidity. Horta et al. describes in point of facts the application of FAP flap and some surgical procedural tips in cases of intraoral defects caused by cancer removal or osteoradionecrosis. In the specific case we are presenting, the tissue loss after wide tumor resection interested four different structures: the right upper lip, the nasal ala, the nostril floor, and a small part of the columella. Defect involved also the deep muscular plane of the lip, with consistent depth in soft tissues. Moreover, the patient was relatively young. The need of adequate fill, but also both functional and aesthetic results to reach, led us to consider FAP flap as our first choice in this case. Skin graft or local random flaps have been considered too, but they were deemed unsuitable for achieving our goals. Skin graft would have been unacceptable scars; local random flaps, on the other hand, even providing adequate tissue fullness and maybe good functional outcomes, would probably have produced poor aesthetic results and the risk of ski deformity. Moreover, as reported by Durgun et al [8] and Burget et al. [10], local flaps miss the possibility to reach the central part of the lip (philtrum or columella) without vascular complications. The use of a perforating flap guarantees instead to reconstruct these areas thanks to its superior mobility, and, in addition, it can be lifted with the same thickness of the defect area [8]. In our experience, FAP flap was able to easily rotate around the axis - more than 90° - providing the whole defect area fill and coverage, and the donor site primary closure as well. No upper lip deformity has been pointed out, skin color was appropriate, nose functionality preserved, and quite good facial symmetry obtained, with satisfactory result from patient’s point of view. As mentioned above, no complications were reported, but the phenomenon of trapdoor has occurred. The trapdoor effect is the elevation or bulging of tissues within the boundaries of scar [4]. It probably derives predominantly from lymphatic and venous outflow impedance, although scar hypertrophy and redundant subcutaneous fatty tissue may also contribute to its development. In our case the first reason could explain our actual “complication”. It typically occurs around three weeks after surgery but can develop as late as 6-8 months post-operatively, and most commonly in island flaps [11]. Furthermore, nasolabial flaps are particularly prone to this complication, probably because the pedicle is superior than in other propeller flaps of the face. Most cases settle with time and\or steroid injections and revision surgery is infrequently required [4] [11]. In our case, the follow up will obviously be extended over the next few months to have the definitive result of the reconstruction.

FAP flap is as a matter of facts a valuable weapon for facial reconstructive surgery, providing stability, due to a single facial artery perforator vessel, a wide arc of rotation and a minor donor site aesthetic impact. In our experience we can confirm what other authors have expressed regarding the superiority of this technique in selected cases and in certain areas of the face, where the aesthetic-functional result is as important as the oncological radicality. Last but not least, the advantage of being able to provide the patient with this type of reconstruction in a single stage is of fundamental importance in our opinion.