Favism in the Elderly

G6PD deficiency is an X-linked, hereditary genetic disorder. G6DP gene is located on the long arm of this chromosome (Xq28). The most common clinical manifestations are neonatal jaundice and acute hemolytic anemia, which in most patients is triggered by an exogenous agent (infection, ingestion of fava beans (favism) or exposure to an oxidative drug). Favism is most frequently diagnosed in children below 5 years of age, whereas its diagnose in adulthood is relatively uncommon, even more in the elderly. We outline a case of an elderly male who required admission to the Intensive Care Unit because of a severe hemolysis and acute kidney injury after fava beans ingestion.

We report a case about an elderly male who presented with severe hemolytic anemia in the context of an unknown Glucose-6-phosphate dehydrogenase (G6PD) enzyme deficiency.

A 78-year-old male with a medical history of dyslipidemia, hyperthyroidism and peripheral artery disease was admitted in the Emergency department with a 24-hour history of dark urine without other symptoms.

Kidney function was normal. Non-immune hemolytic anemia was suspected and patient was admitted to the Hematology ward. In 24 hours, the patient’s level of consciousness worsened (GCS 13-14), hemoglobin fell down to 54 g/L and he developed an acute kidney injury (KDIGO 3) with urea 36 mmol/L, creatinine 338 µmol/L and anuria due to its prerenal condition. In addition, he presented atrial fibrillation with rapid ventricular response (150 bpm).

The patient was transferred to the Intensive Care Unit (ICU) as prerenal AKI could not be reversed, where a hemodialysis catheter was placed and continuous renal replacement therapy was started. During his admission, three packed of red blood cells were transfused. The anamnesis was repeated and patient’s family revealed that few hours before the beginning of symptoms, the patient had ingested fava beans. Although they confirmed that he had previously consumed fava beans in the past, he never developed any symptoms. Then, a genetic study was performed to diagnose favism (see methodology). A genetic variant in the G6PD gene was identified in hemizygous state in the patient [ChrX(GRCh37):153774276T>C), it is a missense change that involves the substitution of an amino acid by other in the protein encoded by this gene [p. (His32Arg )].

According to the guidelines of the American College of Medical Genetics and Genomics (ACMG) this genetic variant in the G6PD gene is classified as pathogenic [1]. In the databases consulted (LOVD3 and ClinVar), this same genetic variant is described in other patients with G6PD deficiency [2]. This study confirmed G6PD genetic disorder.

After starting renal replacement therapy, transfusing red blood cell concentrates and performing volume replacement, the patient’s level of consciousness improved and sinus rhythm was recovered. Hemoglobin remained stable, around 80 g/L, without new transfusions. The liver profile improved progressively, up to a bilirubin of 7 µmol/L at discharge from the ICU, decreasing jaundice and normalization of the urine color. AKI persisted and the patient continued requiring intermittent hemodialysis every 48 hours. Patient was discharged to the Hematology ward 13 days after admission.

Primers corresponding to the complete coding sequence and intronic adjacent regions of the Glucose-6-phosphate dehydrogenase (G6PD) gene (2-13 exons) were designed according to Primer 3 v.4.1.0 software and entry NM_001360016.2 by UCSC Genome Browser on Human (GRCh37/hg19) database.

When PCR amplification products were completed, any inconsumable dNTPs and primers remaining in the PCR product mixture were removed by ExoSAP digestion enzyme. After the clean-up procedure was completed, the bidirectional sequencing reaction was performed by the Sanger method using Big Dye v.1.1. Terminator chemistry.

The sequencing reactions of the fragments amplified were cleaned by a Montage SEQ96 kit on a vacuum manifold prior to their subjection to capillary electrophoresis on an ABI Prism 3500 genetic analyzer (Applied Biosystems). Sequence chromatograms were analyzed using SeqScape v.2.7 software. Mutations and genetic variants were described according to NM_001360016.2 reference sequence and the Human Genome Variation Society (HGVS) nomenclature [3].

G6PD is an enzyme that catalyzes the first reaction in the pentose phosphate pathway converting glucose-6-phosphate to 6-phosphogluconolactone and reducing the cofactor nicotinamide-adenine dinucleotide phosphate (NADP) to reduced form of nicotinamide adenine dinucleotide phosphate (NADPH). Consequently, this reaction provides reduced power to all cells in the form of NADPH. NADPH enables cells to counterbalance oxidative stress that can be triggered by several oxidant agents [4] (Figure 1). 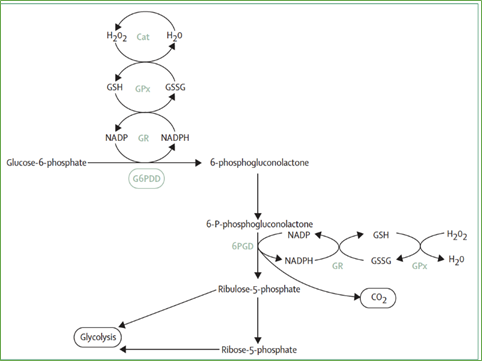 Since red blood cells do not contain mitochondria, the pentose phosphate pathway is their only source of NADPH; therefore, this pathway is necessary to protect the cell against oxidative damage.

G6PD deficiency is an X-linked, hereditary genetic disorder. G6PD gene is located on the long arm of this chromosome (Xq28). Then, this disease is more frequent in males and most females are heterozygotes. This genetic defect is caused by mutations in the G6PD gene, most of which are single-base substitutions leading to amino acid replacements. Rarely, a second mutation is presented. This results in protein variants, with different levels of enzyme activity, which are associated with a wide range of biochemical and clinical phenotypes. The G6PD-deficient variants are grouped into different classes corresponding with disease severity [5-6] (Table 1). Our patient was included in class II.

Deficient G6PD alleles are distributed worldwide; a conservative estimation is that at least 400 million people carry a mutation in the G6PD gene causing deficiency [4]. The highest prevalence is reported in Africa, Mediterranean, the Middle East, Southeast Asia, and the central and southern Pacific islands. However, because of fairly recent migration, deficient alleles are nowadays quite prevalent in North and South America and in some parts of northern Europe. The most common clinical manifestations are neonatal jaundice and acute hemolytic anemia, which in most patients is triggered by an exogenous agent (infection, ingestion of fava beans or exposure to an oxidative drug).

Focusing on favism, this disease presents as an acute hemolytic anemia in a G6PD-deficient individual following the ingestion of broad beans (Vicia faba), usually 24 hours after the ingestion. It is the form of presentation most frequently associated with the Mediterranean variant of G6PD deficiency. Not all G6PD-deficient individuals undergo favism after ingestion of fava beans, and even the same individual can have an unpredictable response, suggesting that several factors affect development of the disorder (health of the patient and the amount of fava beans ingested). It occurs most frequently in children below 5 years of age, is relatively uncommon in adults [7] and extremely rare in elderly. It can be fatal. The Mediterranean-type G6PD deficiency is common in our population and usually it is not difficult to diagnose. We have reported this case because favism can be encountered in daily clinical practice but is extremely rare to be diagnosed in elderly and specially upon ICU admission. Additionally, the mutation presented in our patient seems to be more frequent in Asia [2]. As long as the family genetic study is still to be completed and as far as we know, our patient did not have any Asian genetic background. Genetic counseling is recommended to evaluate these results according to the clinical and family context. G6PD deficiency is inherited in X-linked pattern. Patient's daughters are mandatory carriers to G6PD deficiency. Heterozygous female carriers have a risk of 50% of transmitting the pathogenic variant in each pregnancy.

In summary, G6PD deficiency should be suspected in cases of Coombs-negative hemolytic anemia where the patient has an exogenous trigger (infection, drugs or fava beans). Our case presents distinctive and exceptional aspects: first, that hemolytic events due to G6PD deficiency could present with different degrees of severity in the same patient (he had ingested fava beans previously without any symptomatology); second, it appeared in the elderly; third, he required ICU admission; and last, he presented an Asiatic mutation in spite of his Mediterranean origin.

None of the authors have any conflict of interest to report