Purpose: The present study aims to describe the differences in the prevalence of EGFR mutation of lung adenocarcinoma between private and public healthcare institutions.

Methods: This was a descriptive, observational, retrospective, multicenter study with confirmed diagnosis of non-small cell lung cancer, adenocarcinoma subtype, distributed between two private practice centers and one public healthcare institution. After a pathology review to determine whether there was enough tumor tissue to make a molecular biology study, mutations were determined using real-time PCR for EGFR tyrosine-kinase domain gene.

Conclusion: We found that there is a statistically significant difference between the frequency of EGFR mutations between populations attending public and private healthcare institutions, probably related to ethnic differences between populations. Despite what has been reported in the present study, these conclusions cannot be generalized and further investigation is needed.

Lung cancer is one of the most prevalent malignancy in the world and the leading death cause due to cancer [1, 2]. The estimated number of new cases detected every year is 1.8 million, accounting for 12.9% of all malignancies diagnosed in 2012, with an annual mortality rate of 19.4%, which translates to 1.59 million deaths according to worldwide statistics. The most prevalent rates (up to 58%) have been found in Europe, East Asia, and Sub-Saharan Africa [3]. In Mexico, the incidence of lung cancer ranges between 4.3-6.8/100,000 habitats in the latest epidemiological report, accounting for 11% of cancer-specific deaths [4, 5]. Notwithstanding that smoking is one of the most recognized risk factors for lung cancer (85% in men and 47% in women), different risk factors have been described, including exposure to wood smoke, work-related exposure (silica, carbon, radon, and petrochemical substances), among others [6, 7].

The most common subtype of lung cancer is adenocarcinoma (40% in men and up to 50% in women), being especially prevalent in non-smokers with a high frequency of mutations in specific genes, such as EGFR, KRAS, ALK, and ROS1. These mutations can be present in up to 64% of patients with adenocarcinoma, having special importance for the use of targeted therapy [7, 8]. EGFR classically described as the most prevalent gene mutated in lung adenocarcinoma have different mutations of clinical relevance, for example, exon 19 deletions and L858R substitutions in exon 21 accounting 90-95% of the cases. Their frequency varies depending on several factors like smoking history (more prevalent in non-smokers), sex (more common in female patients) and race (10-15% in Caucasians and up to 50% in the Asian population) [9]. The differences mentioned above have been of utility for the introduction in the therapeutic approach of multiple agents approved in first-line, including Erlotinib, Gefitinib, and Afatinib [10-15]. More recently, due to T790M tyrosine kinase inhibitors resistance mutation, a third-generation of inhibitors have been approved, with promising results [16-21]. In Mexico, there are multiple disparities and limitations towards access to an adequate health system generating a great heterogeneity of population among those who attend a public and private institute. This exemplifies a common problem raised in developing countries where we need more investigation to improve the oncological approach.

The present study aims to describe the differences in the prevalence of EGFR mutation of lung adenocarcinoma between private and public healthcare institutions.

This was a descriptive, observational, retrospective, multicenter study with a consecutive selection of 333 patients with confirmed diagnosis of non-small cell lung cancer, adenocarcinoma subtype, distributed between two private practice centers (ABC Medical Center and the Spanish Society, Spanish Hospital of Mexico) and one public healthcare institution (Instituto Nacional de Enfermedades Respiratorias, Ismael Cosío Villegas [INER]). The study design was approved by INER’s Institutional Ethics Board following the Declaration of Helsinki, Fortaleza Brazil 2013. The study included patients aged 18 years or older, with a pathology report and determination of complete mutations, who had been diagnosed between January 2011 and January 2016. Early stages were analyzed for research purposes only. After a pathology review to determine whether there was enough tumor tissue to make a molecular biology study, mutations were determined using real-time PCR for EGFR tyrosine-kinase domain gene involving exons 18, 19, 20, and 21 (exon 19 deletion and exons 18, 20, and 21 insertions [G719X, T790M, and L858R-L861Q]). Neoplastic cells were selected and their genomic DNA was extracted; fluorescein and non-fluorescein primers to detect mutated and wild- type forms of the EGFR gene were used. Sample delta Ct values for mutation and control reactions were calculated and compared versus delta Ct values in each mutated reaction, to determine the presence of each type of mutation. Positive and negative controls were used with each sample. The statistical analysis was done using SPSS software version 24.0 (IBM software, Armonk, NY, USA). Pearson’s correlation was used to assess significance between quantitative variables with a criterion for statistical significance of p <0.05. One-factor Anova was used to determine between-group variability. All financial related issues were absorbed by the investigation group from the study. 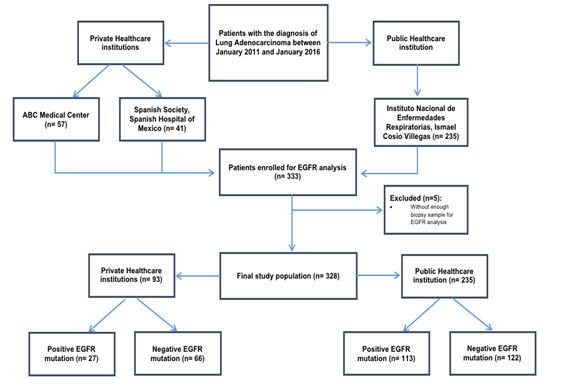 Results from many studies have suggested that there are biological, clinical, and pathological differences across populations diagnosed with lung cancer, and these differences are known to influence not only the prognosis but also the efficacy of cancer treatments. The frequency of EGFR mutations has been reported in Asia at 60-50%, 10-14% in the United States, and 11% in the European population [22], however, Latin America had shown a great heterogeneity by country and this can be explained by ancestral background and ethnicity of each population. Peru is the country with the highest incidence of mutations, with 51.1% (very similar to the Asian population), while Argentina has 14.4% (more comparable with European populations) [23], in contrast, countries like Panama or Colombia show 27.3% and 24.7%, respectively. The Mexican population has also shown differences versus other Hispanic populations around the world, such as the Hispanic population in the United States [24, 25]. However, the results of this study also show that there can be major biological differences within a particular population. This can involve several different factors, including the high level of miscegenation in the Mexican population. The frequency of EGFR mutations from the total study population reported by this study (42.7%) shows similarity to the reports in the Asian population, and to prior reports from other hospitals in our country [22], however, frequency in private institutions shows a prevalence of EGFR mutations of 29%, which does not match what has been reported in our population but rather aligns with the frequency of presentation in some Anglo-Saxon countries and the rest of Western Europe. With these specific results, we could infer that there are population differences between institutions, due to differences in access to private healthcare in the overall population. While most of the population has access to a social security program, a small group also enjoys coverage in private institutions; this small part of the population usually involves first- or second-generation European immigrants (primarily from countries with linguistic similarities), although they are Mexican by birth, a small proportion reside in Mexico City for a number of reasons, such as work or personal reasons. These patients are very different from the large majority of our country’s population, and this could explain why their mutation expression resembles that of their country of origin. The higher presentation of EGFR mutations the public healthcare institution must consider that this healthcare center acts as a reference center for lung cancer, increasing the probability of patients with an EGFR mutation.

Our findings regarding age at presentation and clinical stage are consistent with what has been reported worldwide; however, a larger percentage of women was observed (58.8% vs. 41.2%), which is probably explained, because of lower exposure to smoking in Mexico and higher exposure to wood smoke, a factor higher association of EGFR mutations in prior studies [25].

The lower exposure to smoke in Mexico is also an important factor to consider, as there is compelling data showing that mutations presenting in smokers are different somatic mutations in the non-smoking population, with TP53 (38%), EGFR (20%), KRAS (13%), NFE2L2 (6%), and PIK3CA (4%) mutations were more common among smokers, and EGFR (61%), TP53 (15%), KRAS (4%), and PI3KCA (2%) mutations being more common among non-smokers [6]. The incidence of TP53 and KRAS mutations increases with smoking, while EGFR mutations decrease [26-28]. Clinical stage IV was the most prevalent, as would be expected due to usually late diagnosis. However, we found that most patients with clinical stage I-II were diagnosed in private hospitals, which can be due to better access to programmed follow-up tests or routine laboratory exams that help to detect anomalies earlier, leading to an earlier intervention.

While findings in terms of age, gender, and clinical presentation were similar to prior reports, we found that there is a statistically significant difference between the frequency of EGFR mutations between populations attending public and private healthcare institutions, probably related to ethnic differences between populations. The predominant population in private hospitals involves immigrants from Europe and the United States and their descendants in the analyzed population. Within what appears to be a single population, they are different factors (ethnicity, ancestral background, exposure to smoking, firewood smoke, prior infectious processes) that create differences within it. This explains why individual clinical characteristics are to be considered at all times, as they influence both the prognosis and the efficacy of treatments and warrants the need for personalized medicine. Despite what has been reported in the present study, these conclusions cannot be generalized and further investigation is needed.