Hiatal hernia is defined as the escape of abdominal organs to the thorax due to the anatomical weakness of the esophageal crus of the diaphragm. Hiatal hernia is often asymptomatic and causes gastroesophageal reflux when it is symptomatic. Patients with large hiatal hernias may have significant dyspnea and exercise disorder. The cause of dyspnea can be attributed mainly to large hernias in the thoracic cavity that cause left atrial compression, increase pulmonary venous pressure, produce interstitial edema and reduce pulmonary compliance. Here we present a 79-year-old female patient with hiatal hernia whose primary symptom is dyspnea. In the differential diagnosis of persistent dyspnea without a known cause, large hiatal hernias should be considered as a rare intraabdominal reason.

Dyspnea can be a life-threatening symptom with many causes. Cardiac and pulmonary causes are the most common causes. Less common causes include anxiety, hyperventilation syndrome, metabolic conditions (such as acidosis and anemia) and psychiatric disorders such as neuromuscular disorder. Hiatal hernia is an unusual cause of dyspnea. Here we tried to describe a case of hiatal hernia presenting with dyspnea.

A 79-year-old female patient with known HT, COPD and hypothyroidism was admitted to the outpatient clinic of chest diseases due to dyspnea. The patient complained of dyspnea persisting during rest for 3-4 years and reported that she could not do her daily work. The patient has been receiving oxygen therapy for an average of 15 hours per day for 5 years. The patient recently has been suffering from increased drowsiness. The patient was hospitalized in January 2019 due to the high risk of pulmonary embolism in ventilation perfusion scintigraphy performed to investigate the etiology of pulmonary hypertension 2 months before routine admission to the outpatient clinic. Close vital monitoring and anticoagulant treatment was started. BP: 110/60, P: 62, F: 36.2, SPO2: 93(3 lt/mn O2) was observed. Respiratory sounds were reduced. Pretibial edema was + / +. Laboratory tests revealed tsh: 0.56 t3: <1, t4: 0.68, and that the patient did not use her drug correctly. The dose of euthyrox was increased and the patient started taking it alone in the morning. Wbc: 5180, neu: 62% hb: 10.2, plt: 157 ast: 214 sub: 359 total bilirubin: 1.98 urea: 259 cre: 2.82 na: 145 k: 5.1 nr: 1.31. When the arterial blood gas was seen as ph: 7.30 pco2: 83 hco3: 33 so2: 61 be: 14.4, the patient underwent bpap 12/6. After bpap the results changed to ph: 7.35 pco2: 72.3 hco3: 35.4 and 13.8 so2: 96.8. Abdominal usg: dilatation of hepatic veins (secondary to heart failure?). Lasix 3*1 was started due to acute renal failure, after urine output lasix was reduced to 1*1 and renal function tests stabilized. Hiatal hernia was suspected at the thorax x-ray and thorax CT was requested. Thorax CT: Pulmonary truncus was measured as 32 mm, right main pulmonary artery as 30 mm, left main pulmonary artery as 26 mm and was larger than normal. Other mediastinal main vascular structures were of normal caliber.

Secondary to the compression of the hiatal hernia, atelectatic parenchyma with air bronchograms were observed in the parenchyma adjacent to the hernia in the the superior segment of the lower lobe of the right lung. In the evaluated abdominal sections, the whole stomach, transverse colon, splenic flexura, pancreatic trunk distal - tail section and abdominal fat planes were herniated into the thoracic cavity and organoaxial volvulus was observed in the stomach. No other pathological findings were detected in this upper abdominal section. The patient was consulted to general surgery, outpatient control and operation was planned. The patient was referred to general surgery with a bpap report. 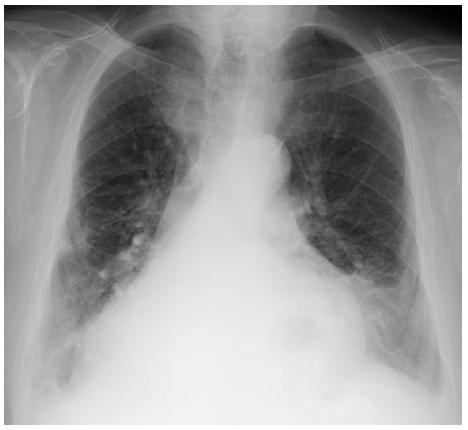 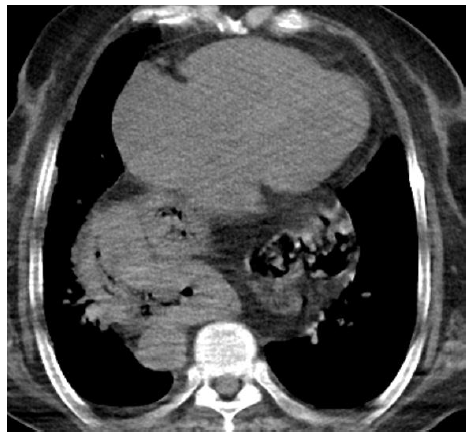 Hiatal hernia is defined as the escape of abdominal organs to the thorax due to the anatomical weakness of the esophageal crus of the diaphragm. There are 4 types: Type I (sliding hernia; gastroesophageal junction and proximal cardia are intrathoracically in the posterior mediastinum), Type 2 (gastroesophageal compound and cardia retaining their normal position under the diaphragm, while gastric fundus and/or a portion of the large curvature proceeds through the hiatus towards the pleural cavity forming a hernia sac) Type 3 (Type 1 and 2 at the same time; although the gastroesophageal compound and the cardia are intrathoracic, the fundus and large curvature remain superior to the cardia), Type 4 (other abdominal abdominal organs other than the stomach and esophagus in the hernia sac). They are more common in women than in men. Hiatal hernia is often asymptomatic. It often causes gastroesophageal reflux when it is symptomatic. Sliding hernias are seen more frequently [1]. Although the cause of the development of hiatal hernia is not known, its incidence increases with age [2]. It is accepted that relaxation of the diaphragmatic crus caused by the aging process is the reason hiatal hernia is more common and more in the elderly population [3].

Dyspnea is often not the primary symptom of a hiatal hernia [4]. Patients with large hiatal hernias may have significant dyspnea and exercise disorder. The cause of dyspnea can be attributed mainly to large hernias in the thoracic cavity that cause left atrial compression, increase pulmonary venous pressure, produce interstitial edema and reduce pulmonary compliance [5, 6]. In our case, dyspnea was attributed to pulmonary embolism, chronic obstructive pulmonary disease and giant hiatal hernia.

Type 1 hiatal hernia does not require treatment unless symptoms are present. However, if gastroesophageal reflux is present, drug treatment is applied. If medication fails, surgical intervention is required. Type 2,3,4 hiatal hernias are indicative of surgery when detected, even if they are asymptomatic, because complications can be fatal and the disease progresses without surgical treatment.

In conclusion, large hiatal hernias should be considered as a rare intraabdominal cause of dyspnea in differential diagnosis.