Background: Gestational trophoblastic disease (GTD) is a rare developmental form of proliferative trophoblastic tissue. Scarse literature exists regarding the optimal management of patients with advanced GTD. We report a case of high risk GTD treated with poly-chemotherapy prior to uterine suction curettage.

Case: A 29-year-old woman presented high risk GTD. She was treated with three cycles of poly-chemotherapy in another hospital and then she was referred to our emergency room for the surgical management.

Conclusion: This case highlights the possibility of conservative treatment of GTD.

Gestational Trophoblastic Diseases (GTD) are composed of a spectrum of abnormal trophoblastic proliferation ranging from the benign mole to malignant choriocarcinoma with an intermediate entity based on clinical rather than histological diagnostic criteria [1]. It comprises a group of premalignant lesions, represented by the complete and partial hydatidiform mole (GTD), and a group of malignant lesions with different degrees of invasion, represented by invasive molar disease, choriocarcinoma, placental trophoblastic tumor and epithelioid trophoblastic tumor (gestational trophoblastic neoplasia, GTN) [2]. Invasive mole or choriocarcinoma develops after complete hydatiform mole in 15%–20% of cases and after partial hydatidiform mole in less than 5% of cases [3]. Standard treatment of GTD consists of uterine suction curettage followed by chemotherapy in case of persistent elevation of human chorionic gonadotropin (BHCG). Here we report a case of high risk GTD treated with chemotherapy prior to uterine suction curettage.

A 29-years-old woman with a history of one previous single pregnancy and no relevant medical-surgery history, was transferred to our hospital on February 2nd 2021 for the management of a suspicious GTN. Her medical history began on January 8th, 2021, with an access in emergency room of another hospital for mild vaginal bleeding and pelvic pain. At admission she was pale, oriented and afebrile with a pulse rate of 112 beats/minute and blood pressure of 105/65 mm Hg; the abdomen was mild distended and tender, hemoglobin was 11 g/dl and β-HCG was 1.000.000 mUI/ml. A pelvic ultrasound showed an enlarged uterine cavity, completely occupied by a hyperechogenic formation of 143x170x93 mm, highly vascularized by Color Doppler (Color score 3), with irregular echogenicity and snowstorm appearance suggesting molar pregnancy, absence of other pelvic organs lesion. She strongly desired to maintain fertility. The patient was hospitalized, and Total Body CT scan confirmed the suspect of trophoblastic disease (Figure 1), and showed compressive effect on bladder, small bowel, and sigma; a solid lesion in the left iliac fossa associated with lymphadenopathy or carcinomatosis nodule and bilateral lung nodules were revealed (Figure 2-3). Modified WHO Prognostic Scoring System was performed and the score identified a high risk patient (Figure 4). After a comprehensive counselling a poly chemotherapy was started with EMA/CO regimen (etoposide, methotrexate, actinomycin D, cyclophosphamide, vincristine). After three cycles of EMA/CO a consistent decrease of BHCG was observed. No grade 3 adverse effects were reported. 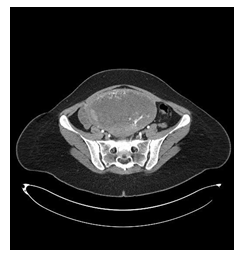 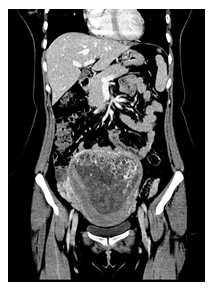 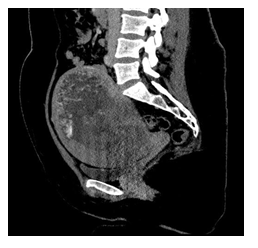 After three cycles of chemotherapy, she was referred to our hospital for the surgical management. At admission the BHCG was 23300 mUI/ml and pelvic ultrasound revealed a smaller uterine mass measuring 83x97x45 mm, with absent or minimal vascularization (color score 0-1). The revision of uterine cavity by ultrasound-guided suction was performed. No bleeding at all was observed during the procedure. The tissue was analyzed by pathologist that confirmed the diagnosis of complete hydatidiform mole. The day after surgery the patient was discharged in good clinical condition (no pain or vaginal bleeding). Desogestrel 75 mcg was prescribed as contraception. The patient repeated BHCG dosage weekly. Table 2 reported the BHCG value during the follow up of patient. After 6 months chest CT scan was negative for metastasis and after 4 months β-HCG value was 0 mUI/ml.

In this manuscript we described a case of high-risk patient affected by complete hydatiform mole treated by poly chemotherapy and conservative surgery. The literature indicates two classes of risk for the management of these patients. As recommended by “Modified WHO Prognostic Scoring System as Adapted by FIGO for Gestational trophoblastic neoplasia” guidelines, the risk score (calculated considering Age; Antecedent pregnancy mole abortion term; Interval months from index pregnancy; Pretreatment serum hCG (IU/L); Largest tumor size (including uterus); Site of metastases lung spleen, kidney gastro-intestinal liver, brain; Number of metastases, Previous failed chemotherapy) should be calculated to identify the risk class of each patient after evacuation of a suspicious molar pregnancy. A total score of 6 or less is considered as low risk. The risk score more than 7 identified a high-risk patient. Low risk patients are treated by revision of uterine cavity followed by monochemotherapy (methotrexate or actinomycin D); in high risk patients polychemotherapy after surgery is often considered. Poly chemotherapy regimen is represented by EMA-CO (etoposide, methotrexate, actinomycin D, cyclophosphamide, and vincristine), which is associated with a complete remission rate of 85%. The risk of hysterectomy associated with the procedure for bleeding complications is higher in case of large masses, elevated BHCG and highly vascularized lesions. In this case the patient desired a future pregnancy and refused the possible risk of hysterectomy at the time of the informed consent. After the scoring procedure, to minimize the risk of bleeding and to reduce the mass, she was submitted to induction chemotherapy with excellent response in terms of BHCG decrease (from 1.000.000 mUI/ml to 23300 mUI/ml), reduction in size of the mass (from 143x170x93 mm to 83x97x45 mm) and vascularization (from color score 3-4 to color score 0-1). Ultrasound hysterosuction was safe and bloodless. After surgery a gradual normalization of the BHCG was observed and the patient is still without disease. This approach is not considered in the current guidelines, and new study on this topic are difficult for the rarity of the disease. However, in strongly selected cases and after an accurate counselling, chemotherapy can be an option before surgery.

Conception, design, and coordination of the project

Collection and assembly of data

Final approval of the manuscript

There are no funding sources.

Written informed consent was obtained from the patient for publication of this case report.

A copy of the written consent is available for review by the Editor-in-Chief of this journal.