Splenic lesions are uncommon and encountered less commonly than pathologies of other visceral organs. However radiological evaluation and diagnosis of these lesions using ultrasound, Computed tomography and Magnetic resonance imaging has good specificity in differentiating congenital, benign and malignant lesions. The purpose of this pictorial essay is to offer a review of the common and uncommon splenic pathologies and illustrating the typical imaging features of these lesions.

Spleen as an organ is overlooked however careful evaluation while imaging can help us give important clue to diagnosis of different pathologies such as malignancy, hematologic disorders, infection, abdominal trauma, portal hypertension and miscellaneous conditions. The lesions involving spleen can be solitary or multiple [1]. In addition, congenital anomalies of the spleen, anatomical variants and rare anomalies such as asplenia and polysplenia syndrome are important to recognize along with awareness of the associated complex findings [2].

There are lobulations seen in fetal spleen which however normally would disappear before birth [3]. In some cases, it may persist till later age and is a normal variant. These are usually located on the medial part of spleen [4]. On the superior border of adult spleen generally notches or clefts are seen which are remnants of the grooves that separate the fetal lobules. The clefts usually have a well defined margin and can extend 2-3 cm deep within the parenchyma (Figure 1) and may be falsely diagnosed as laceration.

An accessory spleen is a normal splenic tissue which is discrete from the main splenic body which results due to the failure of fusion of splenic anlage [5]. They are asymptomatic, found incidentally and should not be misdiagnosed as lymphadenopathy [6]. Its detection is important in patients with hematologic or autoimmune disorder planned for splenectomy so that all the functional splenic tissue is removed [7-9]. They are usually spherical in shape ranging from few millimeter to centimeter and have well-defined borders (Figure 2A and 2B). Common locations include splenic hilum and tail of pancreas with other uncommon locations being along the splenic vessels, gastrosplenic and splenorenal ligaments. The characteristic of splenunculus is that they enhance homogeneously and show similar density or intensity to that of adjacent splenic parenchyma on CT and MRI respectively [10].

Wandering spleen, also known as ectopic spleen is the presence of spleen at a site different from the usual in left upper quadrant. It can be both congenital and acquired in etiology and results from migration of the spleen caudally in abdomen or pelvis due to laxity or maldevelopment of the supporting splenic ligaments with most common location being the left mid abdomen [11]. The various acquired causes of laxity of ligament include the hormonal effects of pregnancy, and abdominal wall laxity [12-14]. It is usually seen in age group between 20 and 40 years and is more common in women. Acute torsion is the major complication encountered and is a surgical emergency [15]. The diagnostic feature on CT finding would be absent spleen in its normal location with a soft-tissue mass having imaging features of normal spleen, located somewhere in the abdomen or pelvis (Figure 3). In cases of splenic torsion, the twisting of pedicle with splenic vessels and surrounding fat, known as the whirl sign is the

Polysplenia is associated with anatomic abnormalities known as heterotaxia [16, 17] It is a complex congenital anomaly and part of spectrum of partial visceral heterotaxia (situs ambiguous) and concomitant levoisomerism. Severe cardiac anomalies are associated leading to diagnosis in early infancy [18]. Interruption of the inferior vena cava (IVC) with azygos continuation being the most frequent anomalies. There are multiple spleens in abdomen. (Figure 4).

Asplenia is characterized by absent splenic tissue along with an abnormal arrangement of the abdominal organs with liver and gallbladder being midline in location. Congenital heart anomalies are commonly associated with it and seen in majority of patients resulting in high mortality in patients during the first year of life (Figure 5A). 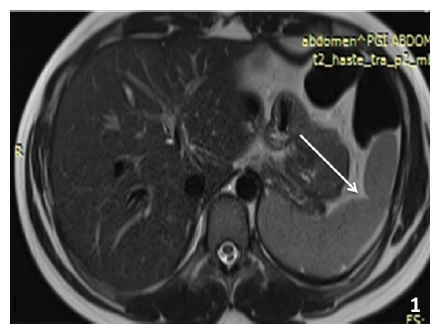 Figure 2: 2A) USG and axial post contrast CT; 2B) Abdomen shows a well defined round splenunculus in splenic

parenchyma near the hilum (arrow). 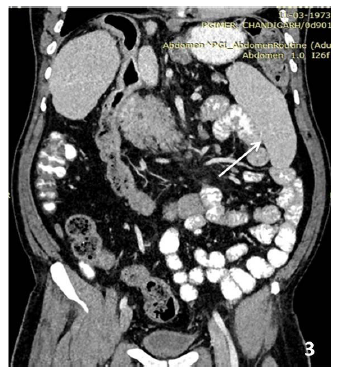 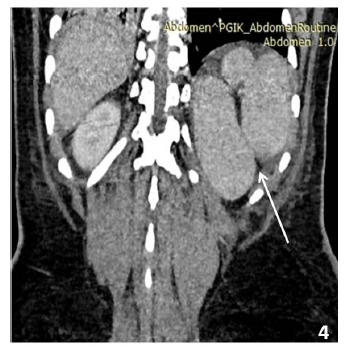 Figure 5: (A and B) 20 yrs old male with liver parenchymal disease shows shrunken liver with volume distribution and ascites. Spleen was absent.

The Cysts are the commonest of the benign lesions of spleen and can be primary or acquired. Primary cysts are always true cysts lined by a epithelium membrane. They are simple, uniloculated or septated and may show punctate calcifications. The acquired cyst have no cellular lining and can be secondary to trauma or sequelae of splenic infarction and abscess. Simple cysts are sharply demarcated lesion as seen as anechoic lesion on USG, and show low density on CT and bright on T2 WI in MRI. No post contrast enhancement is seen [20-22]. (Figure 6A, B, C and D).

The involvement of spleen by echinococcus granulosa is rare and seen in 1-3 % cases of hydatid disease. The cyst consists of pericyst, derived from the host tissue, ectocyst, which is the acellular laminated membrane and the innermost endocyst which gives rise to daughter cyst. The cysts can be large and unilocular or multilocular in appearance. Typically the daughter cysts are arranged peripherally and are less dense on CT and compared to fluid in the parent cyst (Figure 7). A “snake” sign can be seen due collapsed parasitic membranes within the cyst. In a dead cyst there is complete calcification of the cyst with no enhancement is seen is noted [23].

The splenic infection is more common in patients with immunodeficency, post splenic trauma s, and sickle cell disease and presents with left upper quadrant pain, fever, and raised blood counts There can be single or multiple liver abscesses. Splenic abscess may be unilocular and represent bacterial etiology or can be multilocular which may be due to fungal or mycobacterial cause. On USG (Figure 8A) it appears as low echogenicity lesion with complex internal echoes. On CT, it is seen usually as a spherical hypodense (20 to 40HU) lesion with thick shaggy wall and shows peripheral enhancement which however can lack in some cases (Figure 8B). On MRI its is hyperintense on T2 and show restricted diffusion on DWI. Gas or air bubbles may be also seen [24-26]

Spleen is commonly affected organ in patients with disseminated miliary tuberculosis [27]. On imaging there may be mild splenomegaly, enlarged abdominal lymph nodes with central necrosis, ascites with peritoneal thickening. There are usually multiple small lesions or can be a single large lesion. On Ultrasound these lesions are generally hypoechoic to anechoic with ill defined margins [28]. On CT they appear as hypodense lesions and chronic/treated cases may show calcification (Figure 9A and 9B).

Hemangioma is characterized by vascular channels of varying sizes and is the most common benign tumour of spleen. It can be solitary, multiple or can present with diffuse splenic involvement as in kasaback -Merrit syndrome, which is also associated with abnormalities including anemia, thrombocytopenia, and consumptive coagulopathy. They are usually solid or mixed solid cystic lesion and appear hyperechoic on USG and may show scattered or punctate calcification. On Non contrast CT they appear as hypodense and on T2WI MRI appear hyperintense. On post contrast study they show centripetal enhancement with gradual filling on delayed phase. However the classical peripheral nodular discontinuous enhancement is less commonly seen [29-31]. (Figure 10 A, B, C and D).

It is a uncommonly encountered lesion and is generally in younger patients occuring mostly as multiple splenic lesions. Rarely the complete parenchyma may be involved suggestive of lymphangiomatosis. They may be associated with lymphangiomas in other sites such as neck mediastinum and axilla. Various pathologies have been postulated for their development from hamartomatous, neoplastic to congenital defect of lymphatics [32]. On imaging, they appear as well defined, uni or multilocular cystic lesion with thin septations and are commonly encountered in subcapsular location. Calcification can be seen. On MRI the lesion are bright on T2 and may appear bright on T1w images due to proteinaceous fluid or hemorrhage [33].

Hamartoma is a mass of malformed splenic red pulp elements with no organized lymphoid follicles. They are generally solitary and can be as large as 20 cm in diameter and are mostly asymptomatic [34]. They are well circumscribed solid lesions and show homogenous to heterogenous echogenicity with occasional areas of calcification within. On MRI, hamartomas are usually isointense on TI-weighted images and heterogeneously hyperintense on T2-weighted images. with a hypoitense capsule around it. On post contrast study on CT and MRI lesion shows heterogenous enhancement with diffuse early enhancement that helps to differentiate from haemangioma [35]. There may be central non-enhancing areas seen within suggestive of necrosis.

3.8.1 Splenic Lymphoma: Lymphoma is one of the most common malignancies of spleen. The involvement of the spleen and/or splenic hilar nodes individually is defined as primary splenic lymphoma and usually is non-Hodgkin type of lymphoma [34]. Secondary spread of disease to the spleen occurs commonly in both Hodgkin and non-Hodgkin lymphoma and is much more common than primary lymphoma. On imaging there is homogeneous enlargement of spleen with multiple small nodules generally around 1 cm in size and less likely may present as single solitary mass [36] (Figure 11). They are generally hypodense on CT and on MRI appears as isointense with spleen on T1- and T2-weighted images which differentiates them from metastasis which are hyperintense on T2 [37].

3.8.2 Angiosarcoma: Mesenchymal tumour of vascular origin are most common primary tumour of spleen and are rarely encountered. Hemangioendothelioma has borderline malignant potential wheras angiosarcoma refers to the malignant type of vascular tumour [34]. They are highly aggressive lesions with high mortality rate. On Imaging splenic angiosarcoma appear as large heterogeneous lesions sometimes completely replacing most of splenic parenchyma. Lesions vary in size and may show areas of necrosis, acute hemorrhage, hemosiderin deposits, or calcification (Figure 12). Metastases are frequently present at the time of diagnosis [38].

3.8.3 Metastasis: The metastasis to spleen is rare and usually seen in advanced malignant disease with poor prognosis. The most common sites for metastases to spleen are from lymphoma and melanoma, followed by carcinoma of the ovary, breast, lung, stomach, prostate and colon [39, 40] (Figure 13).

9. 1 Siderosis: Portal hypertension is in late stages is associated with splenomegaly. In addition there are, multiple tiny foci of hemosiderin deposits also named as Gamma-Gandy bodies are seen in 9 to 12% of patients with portal hypertension. These foci on USG appear as tiny hyperechoic foci. On CT they appear as hyperdense and MRI as low SI on all sequences with “blooming” on gradient echo sequences secondary to iron deposition [41] (Figure 14).

3.9.2 Splenic trauma: Ultrasound can be used for screening of splenic trauma with hypoechoic to illdefined anechoic areas may be seen in the splenic parenchyma suggestive of either contusion or lacerations. A subcapsular haematoma or perisplenic fluid may also indicate splenic injury. However Computed-tomography is the gold standard for diagnosis of splenic trauma and grading of injury [42] (Figure 15).

3.9.3 Splenic infarct: Infarct are caused due to ischaemic insult to the spleen and associated with haematological disorders,hypercoagulable states, emlbolic event or post trauma sequale. They usually appears as wedge shaped, peripheral hypoechoic or hypodense on USG and CT repectively. No internal vascularity or enhancement is seen within the affected area [43] (Figure 16).

Figure 6: 6A) USG abdomen shows an hypoechoic lesion in inferior pole of spleen which is hypodense in axial CECT image; 6B) s/o simple cyst. 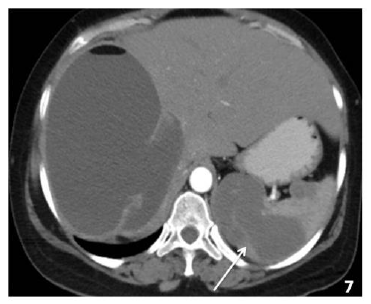 Figure 7: 35 yrs old male with known cases of hydatid disease showing a large cyst with air foci in the right lobe of liver and another cyst with impending rupture in the spleen (arrow). 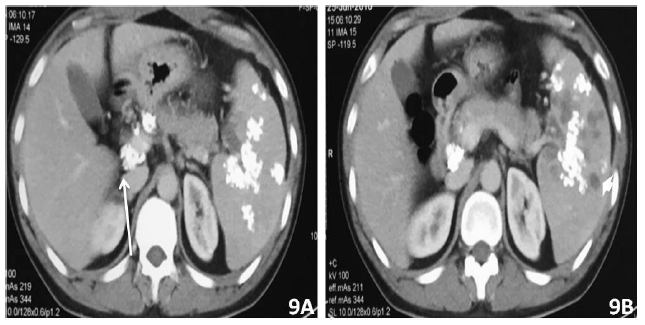 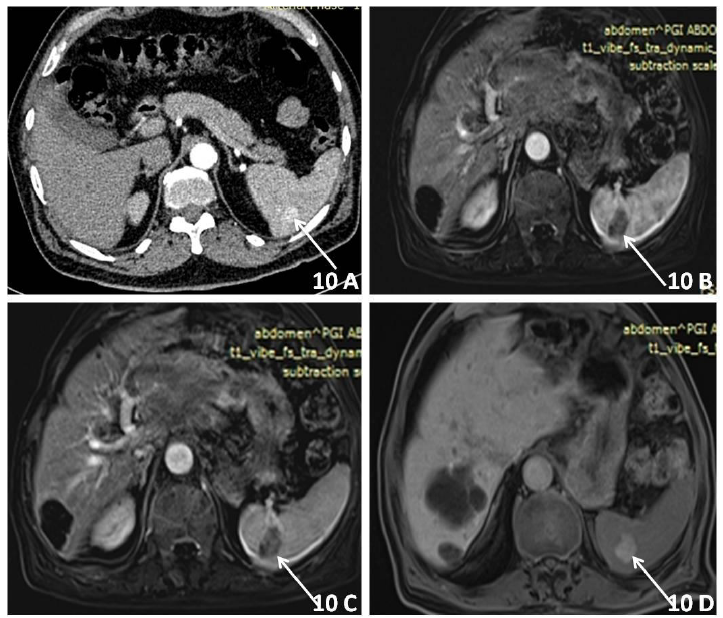 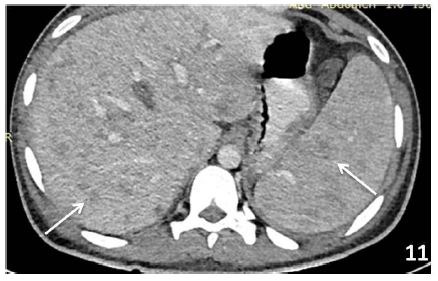 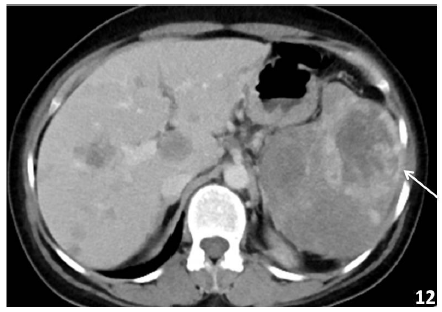 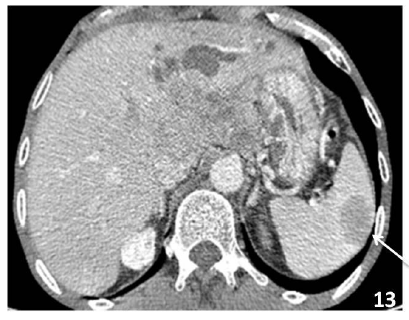 Figure 13: Female patient with cholangiocarcinoma, CECT abdomen showed an ill- defined heterogeneously enhancing lesion in the left lobe of liver with dilatation of few of left biliary ducts and the spleen showed a peripherally enhancing lesion suggestive of metastasis. 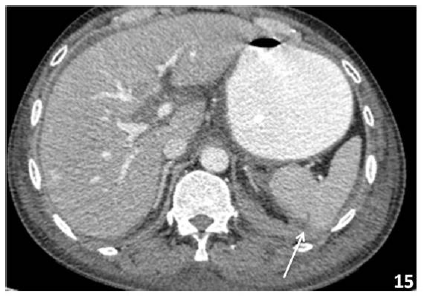 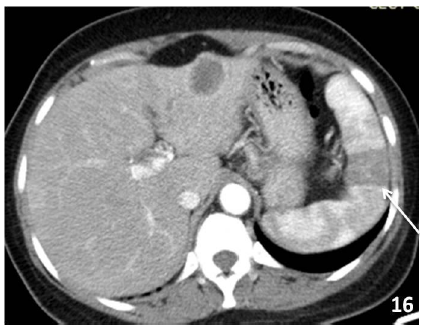 A wide range of abnormalities can involve spleen and imaging plays a key role in identification of these pathologies. These findings can help in correct diagnosis and guiding management of splenic pathologies.